Review: A Deal is Struck in THE DOLLHOUSE FAMILY #4

Mike Carey and Peter Gross’ “The Dollhouse Family” has been one of the most exciting and harrowing comics to read over these past few months. This fourth issue is a prime example of why that is. “The Dollhouse Family” #4 is a chapter built with mounting haunted house and cosmic horror that still manages to create fantastic character storytelling. The work of Peter Gross and artist Vince Locke once again lure in the reader with pitch-perfect visuals to make yet another superb chapter in this DC horror comic.

“Alice’s worst nightmare has come true: the Dollhouse has returned…and if it can’t have her, it’ll settle for her daughter! And as horrible as her prior experiences with the House have been, they’re nothing compared to what it’s been able to come up with after 20 years of waiting…” 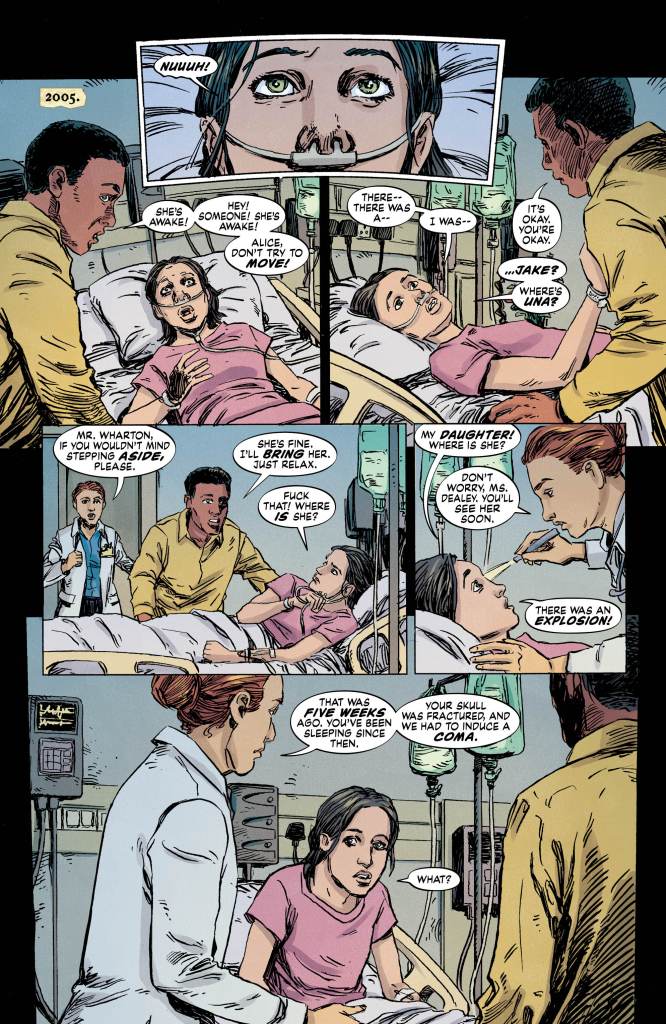 Writer M.R. Carey’s perfect balance of mysterious intelligent horror and relatable character building is on full blast in “The Dollhouse Family” #4. The tragedy of the prior issue is met with the reuniting of a key past character in Alice’s life. Meanwhile, the story of the Dollhouse’s origin is wrapped up in a harrowing and sinister manner. Carey’s flawless ability to flit between these two storylines is once again brilliant, as the two timelines complement each other wonderfully. The sense of passing time from the origin tale to watching Alice grow up presses the agelessness of the terror at this story’s core. Despite the well-orchestrated horror, this series is truly held up by its compelling character drama. Alice’s story has always been interesting, but since her becoming an adult and a mother, it has taken on a whole new level of intimate complexity. Watching Alice attempt to protect her daughter from the Dollhouse’s temptations while maintaining that mother-daughter relationship despite her own traumatizing past is one of the best elements of this series. Truthfully, this human element is what makes this horror story, and any horror story really, so memorable. 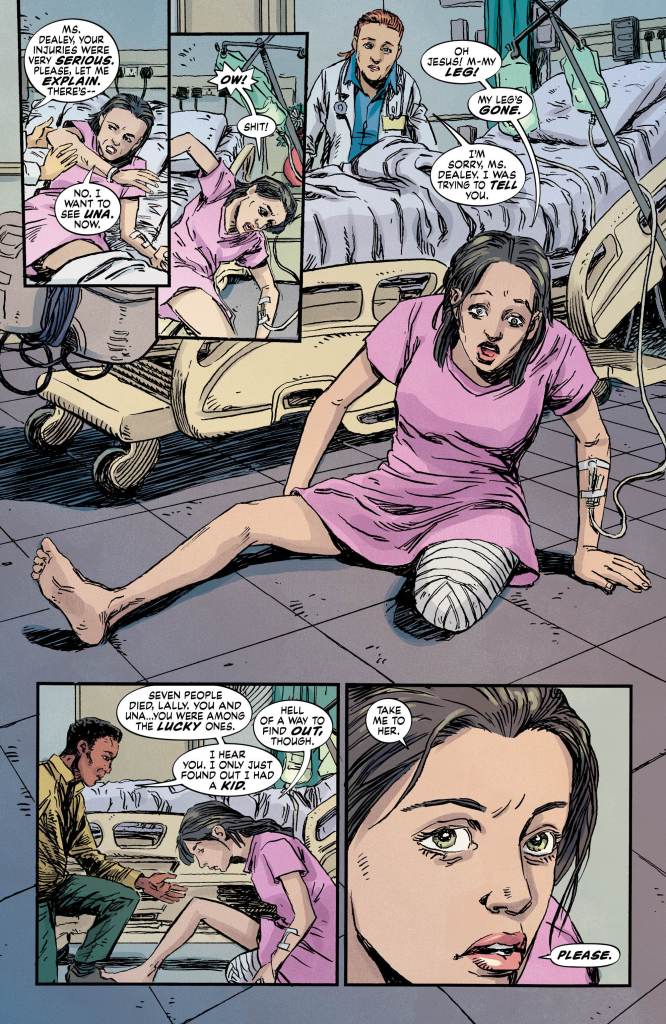 The expert layout and panel direction of Peter Gross combined with Vince Locke‘s distinct style creates the perfect slow-burn mystery-horror of “The Dollhouse Family” #4. There’s an almost cinematic manner in which Gross’ layouts direct the reader along, often laying panels in the foreground or adding artistic flairs that ignore convention. This has been a normal practice for the series so far and is one of the reasons that tension is so effective. The other is of course the penciling of Vince Locke with the colors of Cris Peter. The visual aesthetic of this series is character-focused and off-putting in all the right ways. The characters are given proper expression during the quiet scenes that ground this series, while also setting up the horror-drenched sequences. The style and color palette are so special in this classic Vertigo way where they are somewhat naturalistic but also just off-kilter enough to demonstrate that something is amiss with this world. The images of monstruous or haunting figures are always a shock upon the turn of a page, and they contrast brilliantly with those quiet moments. 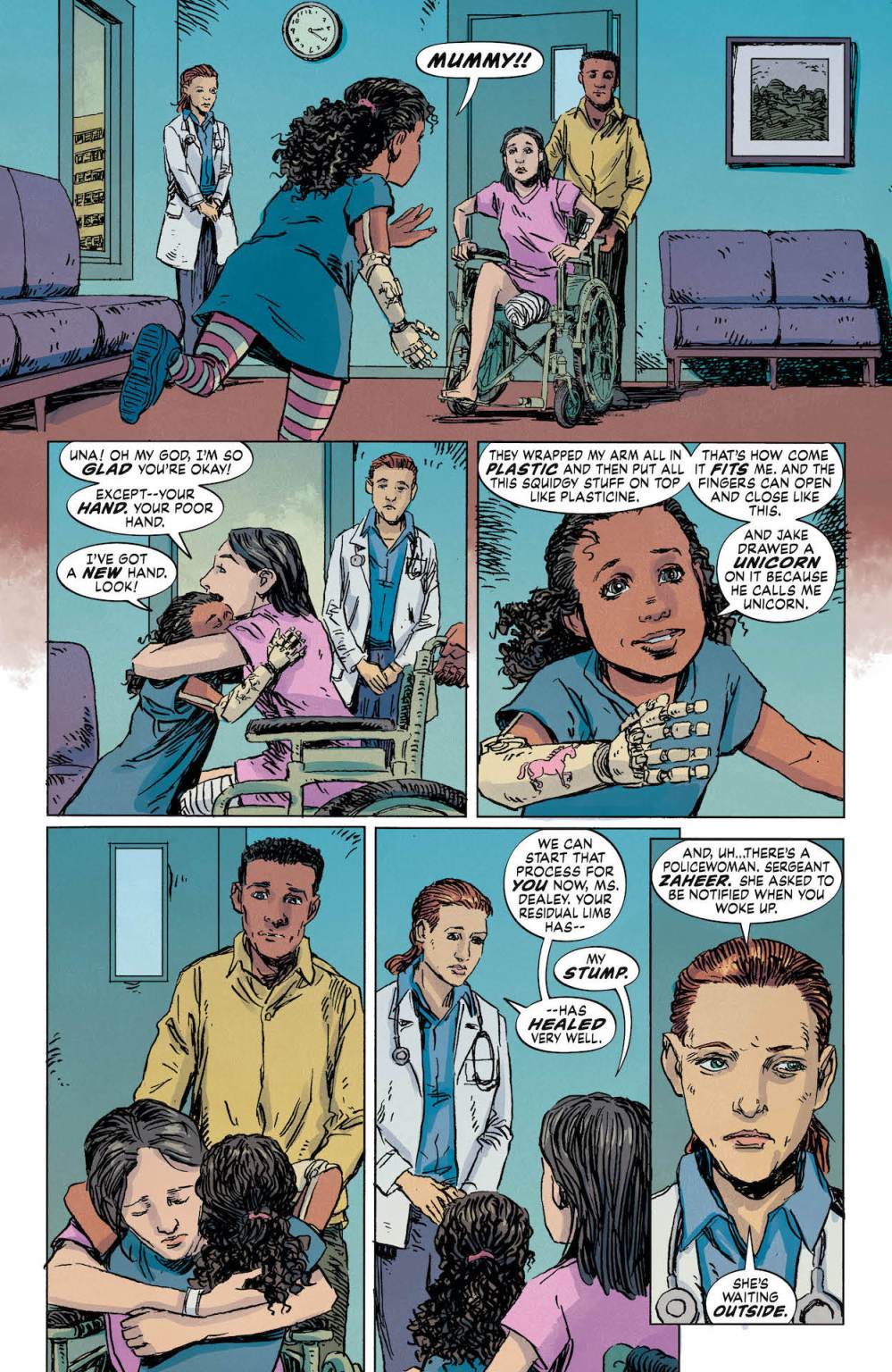 “The Dollhouse Family” #4 is the climax of this brilliantly spooky and intelligent mini-series, with heartfelt character moments and terrifying twists galore. M.R. Carey’s intricate but careful plotting excels yet again, while the art team of Peter Gross, Vince Locke, and Cris Peter maintain the comic’s original and foreboding atmosphere. Be sure to keep reading this excellent outing when issue #4 comes out on 2/12!

Review: A Deal is Struck in THE DOLLHOUSE FAMILY #4An issue that escalates this series' mounting sense of dread while still offering plenty of character development.