“The Dollhouse Family” has been one of the most intriguing horror comics in recent memory thus far. This third issue only proves the point even further. Writer M.R. Carey along with artists Peter Gross and Vince Locke bring forth the most chilling issue of this series yet.

Childhood ends. Children grow up. And young Alice is now a mother herself, raising her daughter alone in 1990s London. But the Dollhouse has never forgotten the promise that she made. The Dollhouse knows where she’s gone. And so does Jenny, the ghost of the girl who died in her orphanage… 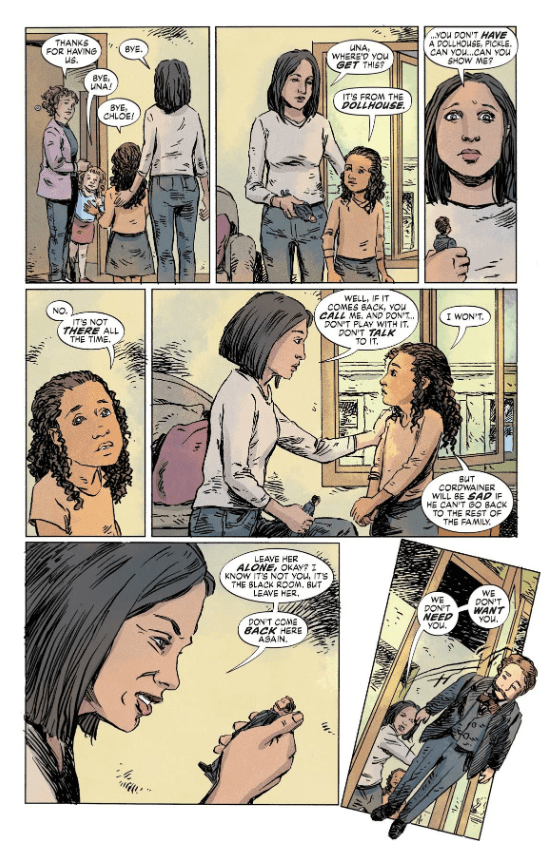 M.R. Carey‘s meticulous plotting and sense of terror return in brilliant spades in “Dollhouse Family” #3. The two plotlines separated by almost two hundred years are as engaging as ever, without ever tripping over one another. On top of this, there is a significant time jump in Alice’s life that doesn’t feel rushed in the slightest. It’s a bit mind-boggling how Carey handles consistent time jumps without ever overstuffing the plot. On top of this, the mystery and intrigue of this story continues to mount alongside the horror. This is likely the most outright frightening issue of this series yet. Carey demonstrates his knowledge of horror in comics with chilling turn-of-the-page scares that will stick in the mind as you read. The human character drama and real-world issues in this book feel realistic as well, making for a fantastic and engaging read all-around. 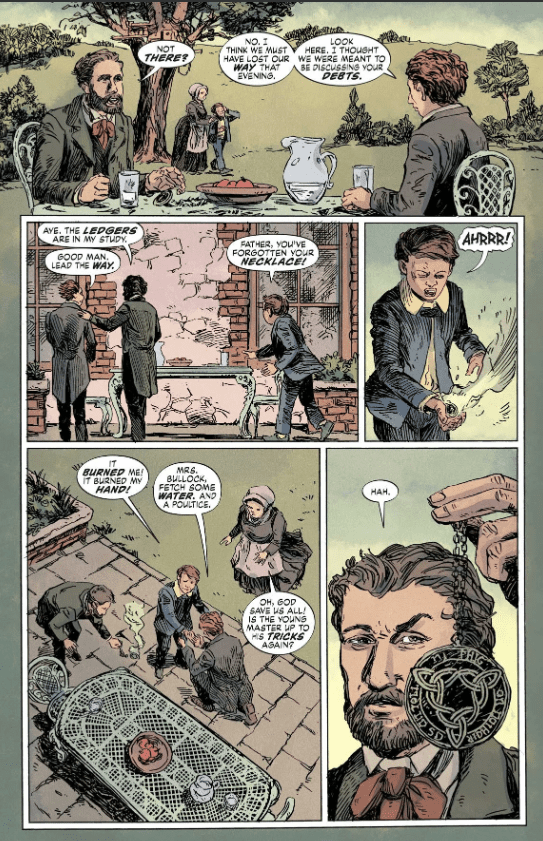 Peter Gross’ handling of layouts and Vince Locke’s art once again creates the brilliant Gothic aesthetic of “Dollhouse Family.” The panel layouts are never seen in any conventional manner, and this assists in creating the winding horror story’s atmosphere. Gross manages to give Carey’s scripts the exact artistic panache they require to really sell the time-jumping unpredictability of this haunting tale. Locke’s pencils and inks also once again prove to be perfect for the sort of classic Vertigo-esque series being made. The characters and environments have the proper brilliant detail put into them, but they are assisted by the sort of “printed on newspaper” look that old Vertigo series had. Locke’s unsettling and outright horrifying visuals are sure to delight fans of this genre. Once again, “The Dollhouse Family” is a flawless fusion of narrative and art to create something truly special.

“The Dollhouse Family’ #3 is a stellar creation of Gothic-horror in comics form. M.R. Carey’s plotting is consistently paced and delivers the unexpected from month to month. Gross and Locke’s visions of this world help to create the most outright intense and terrifying issue of this series thus far. “The Dollhouse Family” is without a doubt one of the most impressive comics on DC’s Black Label imprint.

Carey and Gross jump through even more time to provide the most haunting chapter of "The Dollhouse Family" yet.Review: THE DOLLHOUSE FAMILY #3, Where Demons Stay Meddlesome