There’s a new sickness going around, but it’s pretty cool if it doesn’t kill you. 20XX, out this week from Image Comics, touches on a realistic future that we should really work harder to avoid.

First up we have a newcomer to comics, Lauren Keely writing this story, and another first for Jonathan Luna working in black & white. Luna also handles the lettering, design, and helps Keely with the scripts.

If you’ve been paying any attention to the news you know how frightened the medical science community is getting about the overuse of antibiotics. Bacteria evolves just like any other organism except it happens faster for them. Antibiotics will eventually create “super bugs” that will be immune and resistant to the treatments medicine has come up with.

I highly doubt these “super bugs” will give anyone telekinetic powers, but we can hope. Most likely they will just kill us all and pave the way for a new dominant species on Earth. Here we get a fictionalized look at what we have to look forward to with adaptive super bacteria.

I was initially pretty bummed to see that the book is black & white after such a great cover, but after The Walking Dead‘s exit from store shelves, the industry needs another colorless ongoing to take over. While I love color in comics, this gives Luna more time with the characters and line-work detail. 20XX has all the elements to be the successor: a sickness, death, evil, a fight to survive, and a fight for more than survival. People need something to live for or what is the point of surviving?

There are so many of aspects of this story that will relate to readers everywhere. Everyone all over the globe has to deal with sickness and death. In some countries it has become much easier to deal with dire situations, but for others, and one in particular, it can be a death sentence of a different breed.

In that particular country, society as a whole outcasts the sick, diseased, and disabled, because those people need a little help and there’s no profit in helping people. The victims in 20XX are treated the same way: outcast, shunned, and forgotten. If you can’t make someone money they don’t care about you.

As soon as the main character catches the illness, we see immediately how serious it is and how frightened it makes people. Just before she falls ill, she is on her way to meet her boss for a promotion. After she survives and her sickness is explained to her, she calls her boss only to find out that promotion was given to someone else and her old job has been filled as well. She went from promoted to jobless in a matter of a few days, and unfortunately, this has become the reality for many people. Hopefully there haven’t been any situations exactly like this, but we put up with a system that punishes you for being human.

What she becomes after surviving the illness is something that is treated with contempt. It makes you different so obviously they are immediately treated like garbage. Many humans cannot wrap their minds around anything that is different, and many of them don’t even try to understand. Art can open our eyes and teach us countless lessons. 20XX is a story with humanity in mind, and hopefully it will give us some clues on how to save it. 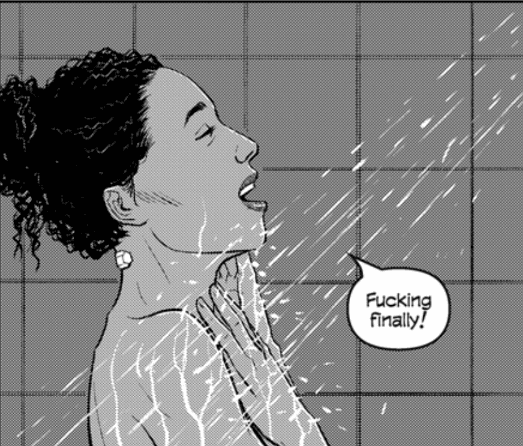 Stories like this always end up being less about what is happening and more about how the characters handle the situations. This is about human nature, and what people resort to when they are mistreated and cast aside. In desperate times we resort to desperate measures. What would you do to survive?

What did you think of 20XX #1? Do you feel like this could be a successor to The Walking Dead? Let us know in the comments below.

Review: 20XX #1 - Are You Down With The New Sickness?Get down come on throw up with the sickness.