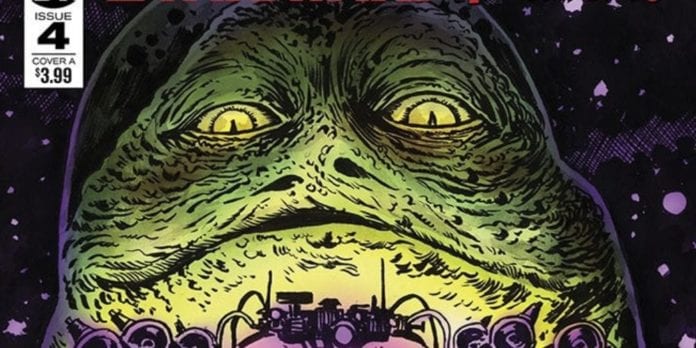 STAR WARS ADVENTURES: RETURN TO VADER’S CASTLE #4, out this Wednesday from IDW, continues the series of tales revolving around Darth Vader’s Castle. This time the focus has turned to Jabba the Hutt, and a misadventure of his own.

Fans just can’t stop obsessing and wondering about the darker side of Star Wars. That’s likely the reason we’ve found ourselves with Return to Vader’s Castle. This series is actually a collection of short stories (so if you’re only interested in hearing about one character, go for it). But each issue is tied to the rest thanks to the comic’s storyteller/narrator, Thom Hudd.

Hudd made the unfortunate mistake of trying to break into Vader’s Castle. Well, he actually succeeded in the “breaking in” part. It’s the getting out that he’s struggling with. In an attempt to stave off his imminent death (via torture), Hudd has gone full Nights of Arabia, telling tales to buy him some time.

So far, we’ve been told stories about Darth Maul, Tarkin, and Ventress. So, who does that leave for us to learn a bit more about next? The tale he tells in Star Wars Adventures: Return to Vader’s Castle #4 revolves around one Jabba the Hutt, and his conniving cousin, Crakka.

Cavan Scott writes the series, and in this issue he gave readers the rare opportunity to see how Jabba and his family interact. Or how he interacts with one of his family members, at any rate.

The tale is a fascinating one, if a bit brief. And it’s good to know that Jabba isn’t the only one in his family out for himself. Crakka may think she’s brilliant at planning…but she’s not. Actually, that isn’t quite fair. Her plan got her a lot farther than you might expect; it isn’t her fault that the item she sought to steal was much more fragile than she had hoped.

This is one of those tales that raises a lot of questions. Yes, the backstory of what Crakka was after was fully explained. But it feels like there’s so much more to this story. That there’s more we can learn or dive into here. With any luck, we’ll see it come up again someday.

Thom Hudd’s side of the story has been interesting as well, of course. His main purpose has been to present a reason to tie all of these stories together, and he’s done his job well. But Scott made the right call in adding a bit more to Hudd’s tale – he’s more than just a storyteller. We just have to put the pieces of the puzzle together, in order to have a chance at discovering what is going on here.

Star Wars Adventures: Return to Vader’s Castle #4 has perhaps some of the best artwork from the series. It might not match the looks of the movies, but it is unashamed in doing its own thing, and it looks amazing.

The world and characters look so vibrant in this issue. Jabba and Crakka each have their own unique color palette and showing off a stylized version of the Hutts. But it is oddly striking and effective, proving the risk was worth taking.

Francesco Francavilla and Nicoletta Baldari were the artists behind all of those decisions, and we applaud their bold decisions. The heavier inkings and lines blend well with the brighter and vibrant color palette. And let’s not forget the lettering, which was done by Andworld Design. It was the right balance for the tale being told.

Star Wars Adventures: Return to Vader’s Castle #4 felt right at home with the rest of this series. Though in many ways, this plot was one of the more intriguing of the bunch. Where the rest felt complete, this one felt like there was more we could learn. And that’s not a bad thing. We just have to hope that someday it’ll be revisited.

As for Thom Hudd? It feels like his plot arc is nearing its natural conclusion, whatever that may be. Feel free to root for him, or not, as you please. We’re not going to judge.