Red Mother Volume 1 from Boom! Studios is out now, by writer Jeremy Haun, illustrator Danny Luckert, and letterer Ed Dukeshire. In it, a woman suffers a trauma that leads to a Lovecraft-esque encounter.

Trauma is at the heart of Red Mother, one that may just give a new definition to the phrase “seeing red.” The main character Daisy, lost both her boyfriend and her right eye to an otherworldly encounter. After losing a significant portion of her life, she goes through different forms of therapy. These treatments try to rationalize everything that’s happening to her, including seeing out where her eye used to be. Anyone familiar with these symptoms will likely try to find as much comfort as Daisy does. That is until they see the terrifying horror from the titular antagonist. What is this Red Mother’s motive, and what does a smiling figure have to do with it? 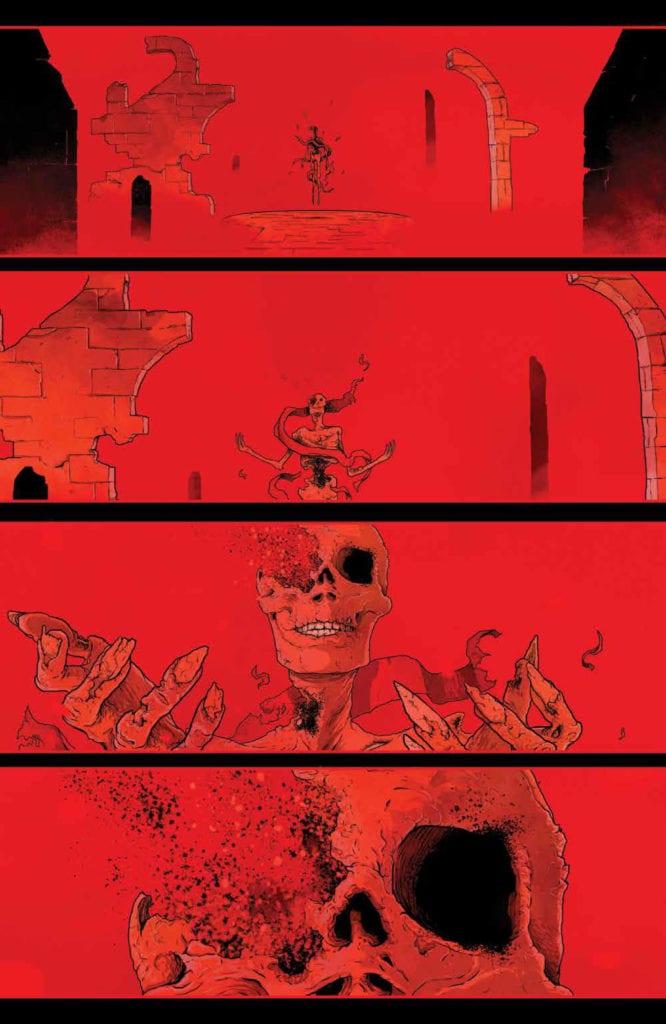 Luckert inserts Red Mother Volume 1 with plenty of foreshadowing imagery. At the beginning of each chapter, the titular queen is forming without her right eye. The color red has a history in comics for signifying danger and its use throughout this trade reinforces that perception. Only Daisy isn’t letting her anger get the best of her despite the above phrase’s meaning. Rather seeing the world in red out of her missing eye has a dual meaning, one of frustration at not finding the answers she needs and a seductive calling towards Daisy. Given how frequently it appears and the fact that barely anyone reacts to Daisy’s panic with enough concern, it forces the reader to question who is trustworthy among Daisy’s peers. Dukeshire uses lettering as he sees fit throughout Red Mother Volume 1. It’s very uniform, never going out of panel. Even the word marks that would shift out of normally seen boundaries are perfectly contained. In this case, it matches with the panels by Luckert. Everything seems fine and uniform like it’s all going according to the Red Mother’s design. Nothing that Daisy or any of her friends or potential helpers do seem to reach one another. It’s a transitional sense of isolation to a feeling of helplessness.

Get Hooked On Red Mother Volume 1

Red Mother Volume 1 is a puzzle that readers are encouraged to solve alongside the main character. With all of the back and forth moments where the reader feels the need to empathize with a woman in need, they emotionally invest in a great story—one where they might be compelled to seek out the next issue.

The Red Mother Volume 1 beckons you to be the main character's main source of empathy as an eldritch monster keeps everything in her grand design.RED MOTHER VOLUME 1: Beware, You Will Become Emotionally Invested