SOMETHING IS KILLING THE CHILDREN #9 Review: Helplessness Is Terrible

In Something Is Killing The Children #9 from BOOM! Studios, James Tynion IV’s writing  gives the story a sense of helplessness that accompanies the dread from Werther Dell’Edera and Miquel Muerto’s art and the terror from Andworld Design’s lettering.

Continuing from the last issue, monster hunter Erica Slaughter needs help in slaying a monster nest. Unfortunately the only way to do that is through using a child as bait.

Something Is Killing The Children #9 On Helplessness

Despite Erica being the best chance at resolving the overall conflict, Tynion goes to show how vulnerable she is. Erica shares her backstory with her previous helper James in order to get his help as bait. What makes this so notable, however, is how Tynion avoids the Hero’s Journey formula. Despite Erica knowing how to fight the monsters and revealing their existence to others, this doesn’t really help anyone. She’s nobody’s mentor and she’s not some mythic figure who counteracts against the monsters; Erica, much like everyone, is just trying her best. If anything, Something Is Killing The Children #9 is a display of futility in the face of utter helplessness. Everyone is in the abyss at this point and nobody can change for the better, just try with all of their might. 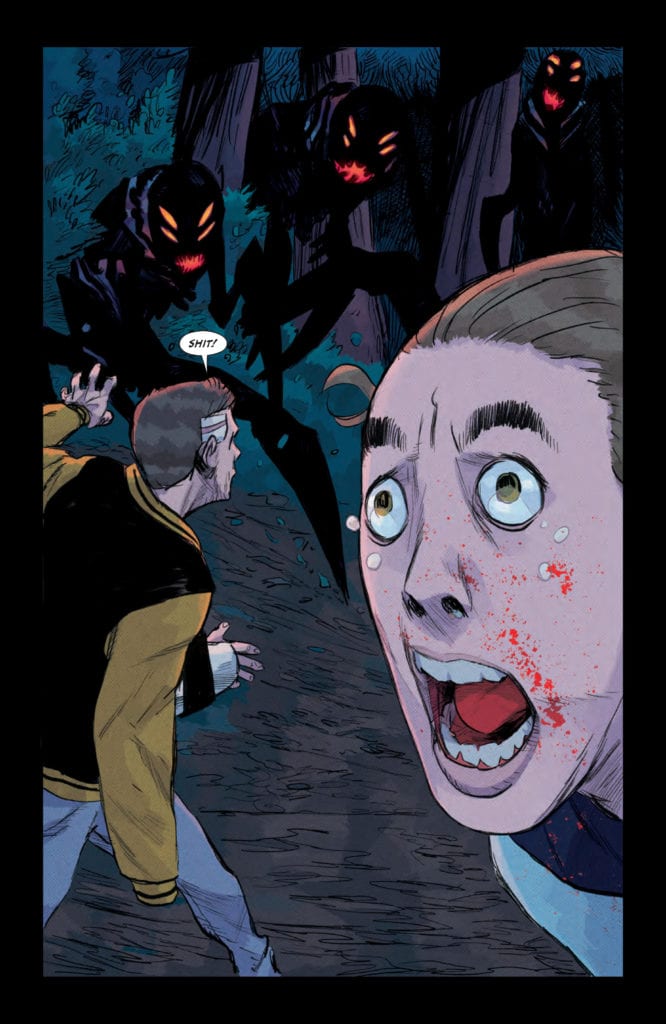 Werther Dell’Edera continues with providing the sense of dread with panels full of close-ups and claustrophobia. Just the panel work of pages get tighter as the panels contract after an initially large panel. Once the monsters appear, the tension explodes into a full splash page where monster circle characters with one having a fearful close-up.

The coloring by Miquel Muerto makes these tense moments feel absolutely horrifying. The black and other dark colors really bring out how uncomfortable some of the settings can be. The dark forest where the monsters dwell and a darker hospital room both feel dreadful. It’s also what makes the brighter colors that contrast everything so eye-catching. Bright red blood appears suddenly; brighter colors accompanying a hospital room to display intentions with clarity. All of it feels like a struggle for a state of equilibrium.

Lettering is by Andworld Design; each word balloon is contained within panels so the reader never gets misses the effects. In addition, the word balloons enhance the suffocating situations by taking up space in already tightening panels, especially when the font and outlines of the word balloons embolden once characters’ emotions heighten. But even those things pale in comparison to the dedicated wordmarks in red, which become more terrifying than the roaring they are meant to interpret. It’s as though a sense of detachment from the monsters is what kills the victims.

Tensions Rise in Something Is Killing The Children #9

Something Is Killing the Children #9 is yet another reason why this series has high marks. It’s story never misses a beat when it comes to its intense atmosphere where characters find ways to interact. Because, before the next conflict, you at least have to connect with the character otherwise you won’t connect with them. The artwork just makes this feeling all the more foreboding. And it doesn’t look it’s going to end anytime soon. No one’s quite out of the dark yet, and there’s more to come. So best make the journey in this issue before meeting the destination for the next issue.

The intensity and dread are on full display in Something Is Killing The Children #9, so check it out for some character moments that accompany the terror.SOMETHING IS KILLING THE CHILDREN #9 Review: Helplessness Is Terrible