MAN-BAT #5: The Completion Of A Metamorphosis

Man-Bat #5 ends this DC Comics miniseries on a high note on June 1. Writer Dave Wielgosz completes the titular character’s journey into self-actualization. It’s something artist Sumit Kumar displays through the life cycle of Kirk Langstorm with colors by Romulo Fajardo Jr., all while letterer Tom Napolitano showcases the weight of every action.

Wielgosz commits the series towards a resolution focusing on Kirk’s recruitment into Justice League Dark. Man-Bat #5 is where everything comes together satisfyingly. Firstly there’s Kirk’s affliction symbolizing his conflict with his inner self. Then there’s how his attempts at fixing everything causing rifts between everyone he cares about. Ultimately, this issue confronts how Kirk’s desire to fix everything is what’s holding him back. So the issue ends on a positive if the uncertain note on Kirk’s future after finally letting go of his delusions. 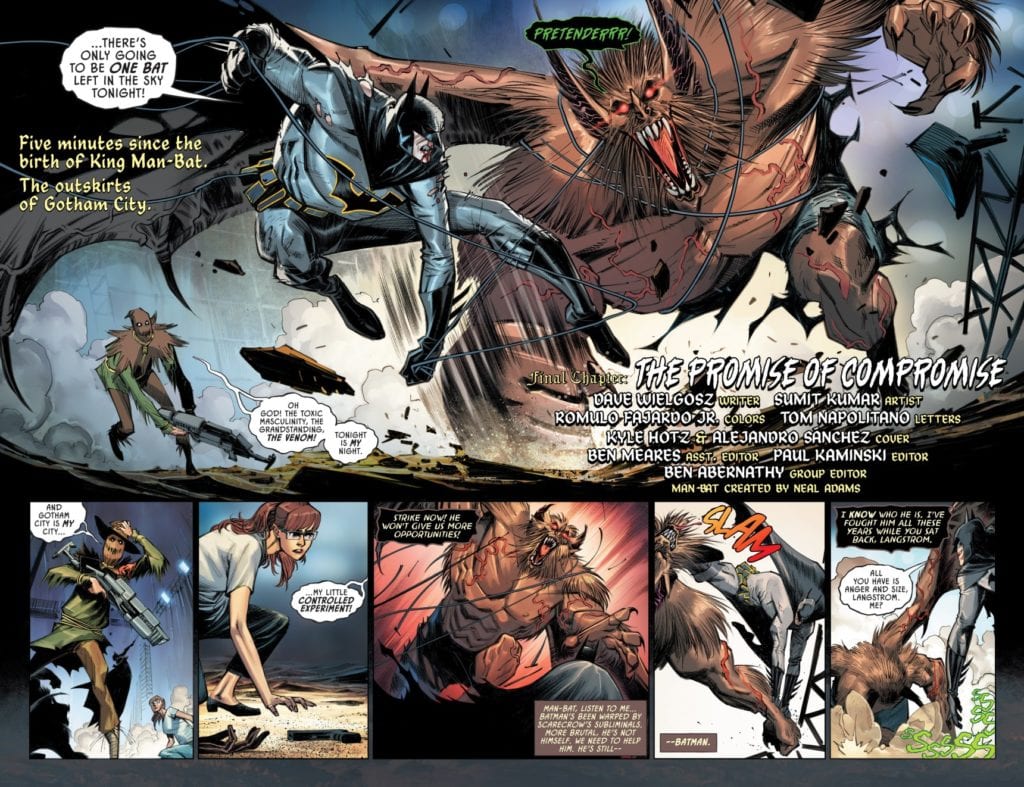 Kumar shows Kirk’s arcs in a physical sense through his illustrations. Man-Bat #5 begins with a swole King Man-Bat; it shows Kirk in a state of power but unstable mind, which is why some of the bigger plot points happen within Man-Bat’s mind where he and Kirk merge. With the end result being a Man-Bat with more human-esque facial features. This allows him to communicate with others without any more limitations.

The background colors by Fajardo display probably the high points of the characters’ inner conflicts. The cool night colors become more intense when Scarecrow uses his fear-inducing sonic weapon. Or how Man-Bat’s battle with Batman often has red backgrounds to display the heightened hostility between them.

Napolitano’s lettering brings more nuance to the conflicts of Man-Bat #5. Batman’s word balloons being slightly distorted shows how he’s under the influence of Scarecrow. Man-Bat, in the meantime, has a black word balloon with green outlines and fonts to show off his Venom augmentations. They are very similar to his captions, almost as if Man-Bat is powering his way through Langstrom’s influence. At least until the end, where their saturated captions show a compromise between them.

Man-Bat #5 ends this mini-series on a compelling note. After viewing Kirk Langstrom’s journey, readers can’t help but want to see more of him. Because while this stage of his life is complete, Man-Bat’s story isn’t quite over yet.

Man-Bat #5 ends a compelling narrative on a bittersweet note when it comes to the uncertainties of where it will take Kirk Langstrom.MAN-BAT #5: The Completion Of A Metamorphosis