In 1988, Grant Morrison’s Animal Man changed comics forever. It broke all the rules, with Morrison writing themselves in as a character, with the protagonist looking off the page at the reader in horror, and with panels slowly collapsing to crush villains inside them. Morrison wanted us to look at superhero comics and question everything about them. They wanted us to never see superheroes the same way again. Writer Tom King, artist Elsa Charretier, colorist Matt Hollingsworth, and letterer Clayton Cowles are doing that for romance comics, in Love Everlasting. Some spoilers ahead for the first issue.

Love Everlasting, originally released digitally by this creative team’s Substack (Everlasting Productions), is now also being released in print by Image Comics. The first volume, collecting the first 5 issue arc “Trapped by Love,” comes out in stores on February 8th. It’s an exploration of the tropes of romance comics. It asks us why we take all the usual story beats for granted. It makes us look at “everlasting love” and shudder, rather than smile. It doesn’t try to ignore the artifice of love stories and comic book building blocks – it puts that artifice in the spotlight. 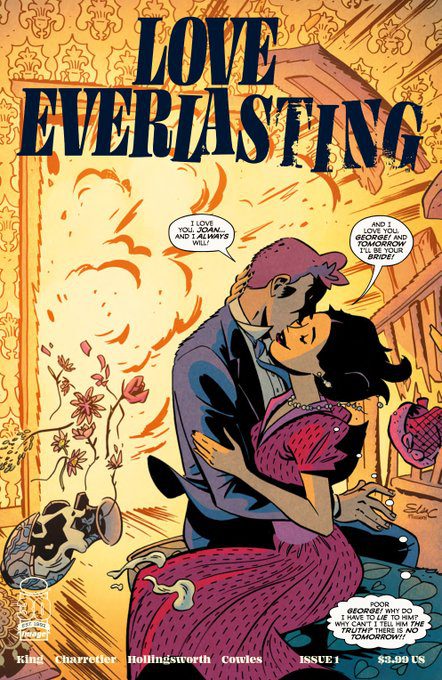 “Everything was just perfect.”

The first issue of Love Everlasting introduces us to Joan Peterson. She’s a lonely woman who has just moved to the Big Apple. She doesn’t know if she’s going to make it there. After all, she’s just a small town Indiana girl. But then, to make things worse, she falls in love with her best friend/roommate’s boyfriend – George. It’s not long before Joan’s roommate gets her a job working as George’s secretary. And so, she sits at her desk each day, her heart quietly breaking as she longs for a man that she can’t have. Then, everything just kind of works out. Quite simply, in fact. We’re left with the image of Joan and George embracing, finally giving into the love for each other that has been growing for so long. Everything is hunky dory.

The first issue of Love Everlasting introduces us to Joan Peterson. She’s a restless girl from Crescent Creek who sneaks out of her house at night to go to the nightclubs full of “hoodlums” that her father is always warning her about. She doesn’t know if – Hold on.

Haven’t we done this before?

Sure enough, we have. King, Charretier, Hollingsworth, and Cowles reset their story, putting Joan in a new context with new stakes at play. And we’re not the only ones to notice this. She notices it too. As she slowly falls in love with her new beau Kit, she finds herself mixing his name up with the name “George.” But who’s George? She’s never known a George before. Or has she?

And again, right when Joan finds her happily ever after with Kit, she’s back at square one a page later. A new life, a new man, a new home. We love the chase, don’t we? That’s what this creative team seems to be saying. The moment a happy ending comes, you can almost hear the roar of hungry readers ready for more. And that’s what this team does. They give us more.

But Joan is tired. She’s always chasing, never enjoying the fruits of her labors. So, she starts running. The first three issues of this fantastic run follow Joan on her flight from love. There are even moments where she is running across a page, and we see Cowles’ caption boxes right on her heels, gaining on her panel by panel. She’s quite literally running from the story. But a cowboy – like some narrative force of nature that keeps these stories within the comfortable bounds of their cliché arcs – hunts Joan down for not playing her role the way she should. “Love is everlasting,” he says before his bullets send her flying into the next story.

When the cracks begin to show in the narrative, Charretier’s style changes. She starts drawing in a way that emphasizes the cracks. Most of the time, her style is somewhat like the kind of thing you’d see in Saturday morning cartoons. Her linework is crisp, clean, and her character designs are incredibly iconic. But when the story becomes self-aware, Charretier’s style changes. The lines become scratchy. The blacks are no longer solid, and Hollingsworth casts the whole thing in a reddish tint. You can practically see the alarm bells going off.

“I don’t fucking understand what this is!“ 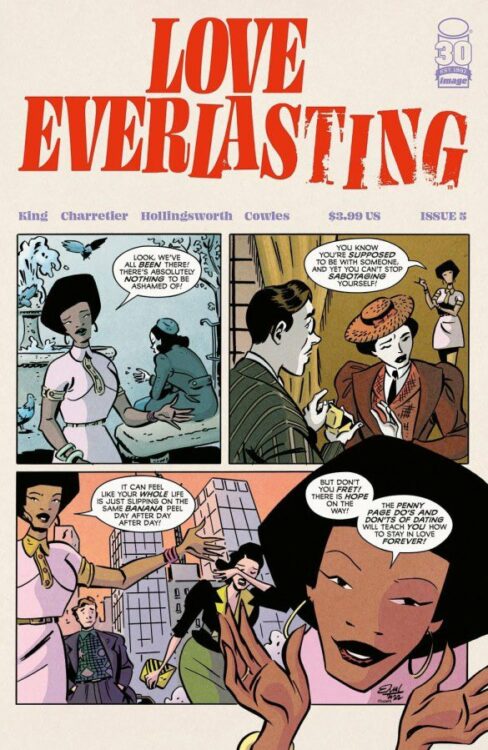 And as the story progresses, this creative team keeps reminding us that this is a comic book. They use techniques that point us to the form in addition to telling the story. In sections, instead of using caption boxes, Cowles uses whole panels for narration. It interrupts the rhythm of reading. Elsewhere, characters have thought bubbles coming from their heads. King is deliberately using a Silver Age convention of storytelling – spelling out what characters are thinking. On a few pages, Charretier has the same character show up multiple times in one panel. Because panels exist as a unit of time, seeing two versions of the same character in one unit of time takes us out of the story for a brief second, just like Charretier intends. And then there are the “covers” for each story or chapter within these issues. They have flashy images, which Hollingsworth often portrays with their own unique color schemes, that work to hook a reader’s attention, but then have little to do with the story itself. The narrative beats that they depict never actually happen within the chapters they’re marking.

Joan breaks the fourth wall, too. Or at least, she almost does. King and Charretier have her looking off the page in shock. Is she looking at us? You can’t help but picture Buddy Baker’s peyote trip in Morrison’s Animal Man. And King also has his own version of Morrison’s continuity aliens – a relationship counselor and a relentless cowboy. But there’s one thing that separates Joan from Buddy. The moment Buddy Baker figures out he’s in some kind of story, he spends every second trying to find a way out. Joan Peterson is different.

Right when we think we’ve nailed down the point of this series, this creative team throws us for a loop. Joan stops running, she stops fighting, at least for a second. Issue #4 of Love Everlasting is an unadulterated, beautiful love story. It’s all the more sweet because of the added layer that it’s not quite real. But for 25 pages, just these 25, Joan doesn’t care. Charretier abandons her clear cut panel borders and creates an immersive atmosphere of a French bar in World War 1. Every panel is on the backdrop of another bigger panel in the background. She invites you to get lost in this story for once, instead of thinking about how it is a story. 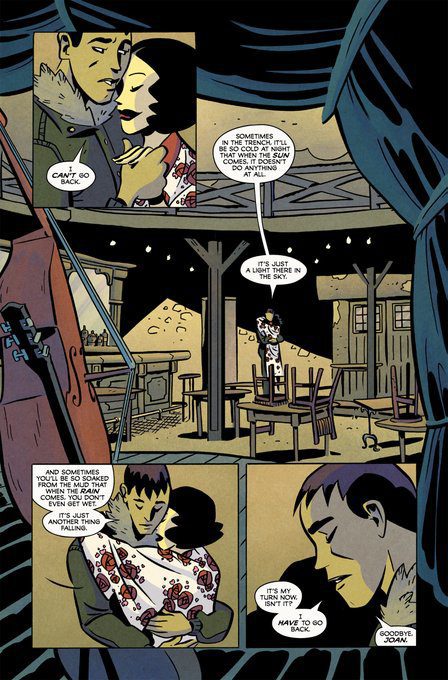 Love Everlasting is confusing, beautiful, and riveting. At some points, it feels like a psychological horror comic, where the idea of “everlasting love” has been twisted into some cruel form of torture. At other times, it feels like a deconstruction of comics themselves, and a dissection of oversimplified romances. But then, right when you think you have it figured, it shows it can sometimes just be a beautiful love story. Love Everlasting is a classic in the making. It’s the next Animal Man, just with a lot more kissing. King, Charretier, Hollingsworth, and Cowles are rewriting the game in a way that you have no choice but to fall in love with.