lThe story of the X-Men in comics is the medium’s equivalent of common biblical knowledge. Even casual non-comics fans are familiar with the trails of mutantkind and Charle Xavier’s team of naturally gifted heroes. From conflicts with Magneto’s Brotherhood of Mutants to the discovery of the Phoenix Force, and from Days of Future Past to the comic of Apocalypse, the X-Men’s history is considered some of the greatest work every put to the panelled page.

As it turns out,  Buffy the Vampire Slayer and  Firefly creator Joss Whedon is also a massive X-Men fan. So when he was offered the task of writing said X-Men – with near-complete creative freedom, mind – he happily obliged. Even better, he paired with visual tour de force and Planetary artist John Cassaday to bring his vision of the canonical comic team to life. The result is, well, *ahem* astonishing. 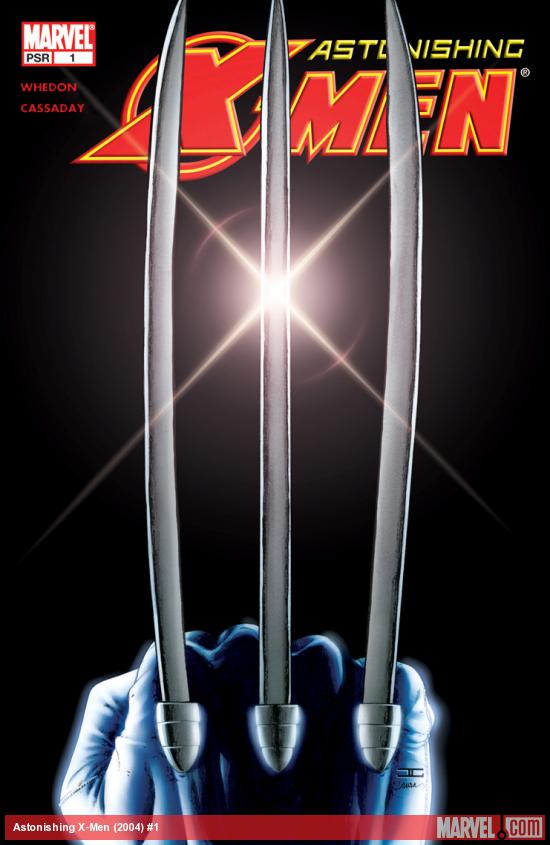 Taking place shortly after the events of Morrison’s New X-Men, with Magneto and Jean Grey dead and Charles Xavier in self-imposed exile, Scott Summers (aka Cyclops) becomes the new leader of the X-Men and headmaster of Xavier’s School. The team sees the return of old friends, with the likes of Kitty Pride (aka Shadowcat) and Peter Rasputin (aka Colossus) rejoining the ranks and teacher lineup along with Emma Frost, Beast, and Wolverine. The new class and celebrated returns marks a new start for both the mutant heroes and Xavier’s School for Gifted Youngsters. However, threats from beyond the stars and within the confines of their own home threaten the X-Men and their students at every turn. Alien warlords, vengeful A.I.’s, shady government groups and even treachery within the X-Men themselves make for a Marvel story that is an outstanding mix of modern themes and homage to decades past.

Joss Whedon‘s established style of writing has always been a simple but effective method for creating a compelling story. He sets the rules for a newly created world and investigates those rules through character action and interaction. In the case of  Astonishing X-Men, Whedon is entering a long-established world with a roster of beloved characters. He dances a difficult jig, having to both maintain the route Morrison set with the X-Men in his own run, while still letting his creativity and love for the classic material show through. So right off the bat he reintroduces longtime fan favorite Kity Pryde back into the mix, endearing his run to longtime fans as well as satisfying his own desires as a fan. Whedon’s character writing faced an intriguing challenge as well, having to maintain both long-established and newer character dynamics while still not running into series repetition. Fortunately, Morrison left him some interesting tools to play with for the future. 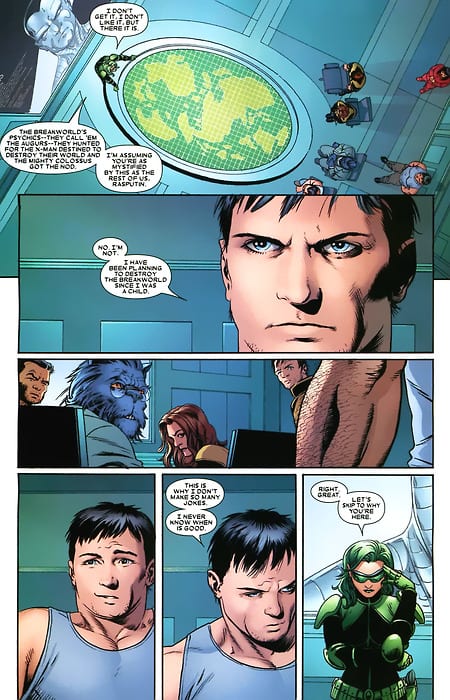 Whedon’s proven track record and playing out long-term plots with tight and believable character drama within works perfectly with  Astonishing X-Men. Emma Frost’s inclusion in Jean Grey and Professor X’s absences makes for several uneasy moments between Kitty Pryde and the former White Queen of the Hellfire Club. The troubled romance between Scott Summers and the former villain is a mix of stress-inducing and oddly sweet. Of course, the rest of the team’s dynamic is spot-on in terms of their classic repertoire while also elevated to contemporary dialogue. Whedon has a very screenplay friendly style of character presentation that also relies on visualization (more on that later) to represent all sides of his characters. The humor here is stellar and ranges from simple jokes to massive pieces of hilarious dramatic irony. While the students aren’t quite as large a focus as they were in the prior series, they are still given considerable importance in  Astonishing. A select few are given their own arcs – some inspiring, others tragic – and become instrumental in the X-Men’s success. Only one really builds a relationship with one of the teachers, however. This may be the one weaker aspect of the series, especially given how much time was spent developing the students as characters and the teachers as such in Morrison’s run. However, this is again made up for in just how much fun the series is to read.

Whedon takes a bold risk in  Astonishing X-Men by opting to create new villains instead of recycling old ones. The first arc, “Gifted,” introduces Ord of the Breakworld, as well as the narrative throughline culminates in the final issues. The stoic alien warrior’s motivations against mutantkind spark the creation of the now-famous “mutant cure.” This also runs the X-Men into the path of S.W.O.R.D. and their clandestine agendas involving alien activity. The other major enemy Whedon introduces comes as one of the more morally polarizing revelations in X-Men’s recent history: Danger. The mutant team’s longtime training room gains a malicious sentience, resulting in an arc that not only showcases one of the most, er, dangerous villains conceived in X-Men comics, but also brings up a fascinating conversation within X-Men lore. Where exactly does self-actualized artificial intelligence fit in among the species hierarchy among humans and mutantkind? Oddly enough, this is probably the weakest arc in the whole run. The pacing in this arc is muddled a bit by its exposition laden plot points. This being said, even “Danger” is still a wholly entertaining and unique chapter. 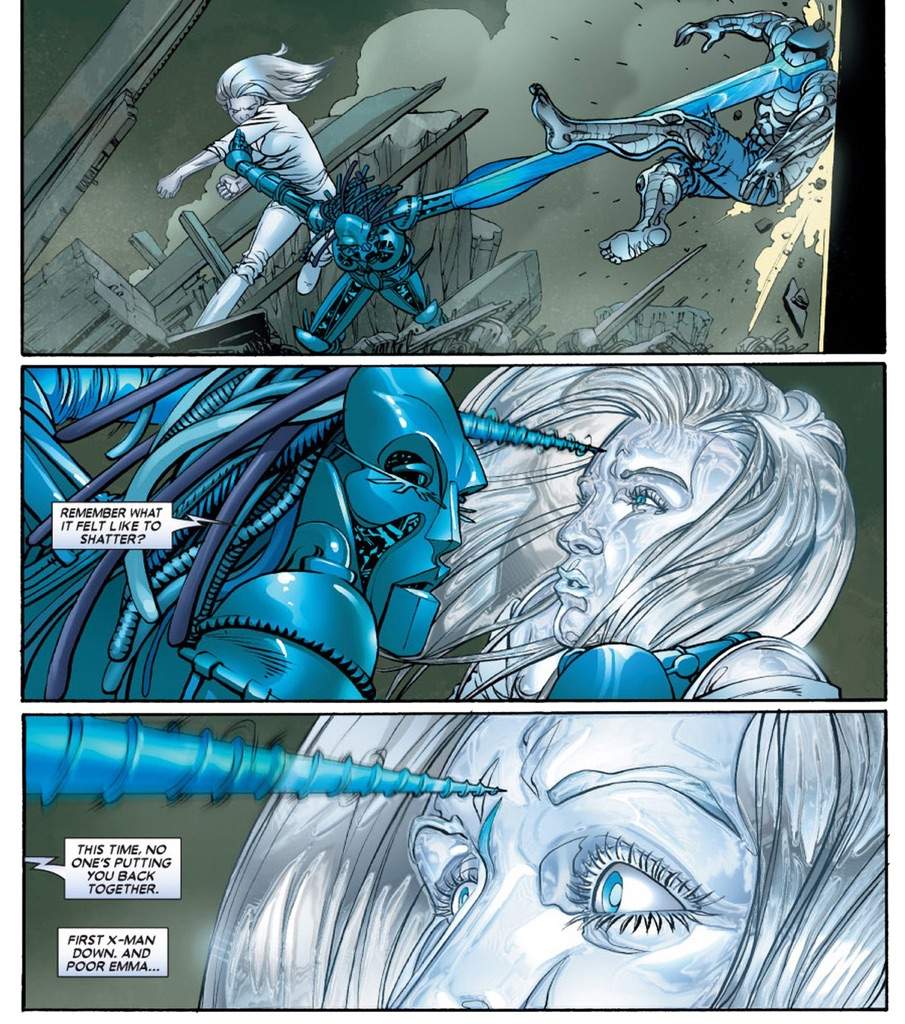 When Whedon does use preestablished villains in Astonishing X-Men, it’s more in the service of analyzing the core team instead of crafting an external threat. Without getting into spoilers for those who haven’t read this, the character of Emma Frost comes into frequent question. This applies both in terms of her place as a former villain turned X-Man, and how fans perceive her place here. The arc where enemies both classic and from Morrison’s run appear is used by Whedon to solidify her spot on the team. This is a peak example of respecting the direction Morrison started while also paying mind to the years of prior storytelling. The entire plot, for all of its twists and satisfying character deep dives, realigns itself on the character that becomes the sort of “heart” of the team and brings about one of the most gut-punching beautiful endings in mainstream comics. Let “Giant-Size Astonishing X-Men #1 reign as one of the greatest single issues in recent history.

Of course, none of this series would work if the visual direction didn’t match the cinematic action and character focus that Whedon’s scripts require. So it’s fortunate that an artist like John Cassaday, who brought his style specializing on cinematic action and character detail to bear on Warren Ellis’  Planetary,  was available for this endeavor. Cassaday’s work utilizes an almost digital style, creating a visual aesthetic that is indeed cinematic. This makes the comic easy to engage with in terms of character, as the character details for facial animations are entirely naturalistic. The art walks away from the standard superhero style that can sometimes come off as either “too cartoony” or “too slick” to be truly character driven. Cassaday is given a lot to work with from Whedon as well, since the writer scripts so many wordless panels that are driven solely by character expression or action. The X-Men have scarcely ever looked better, as their designs as both people and as heroes are slick and contemporary with a dash of classic superhero elements. Whedon’s decision to revert back to superhero costume designs is put into great effect thanks to Cassaday’s work. 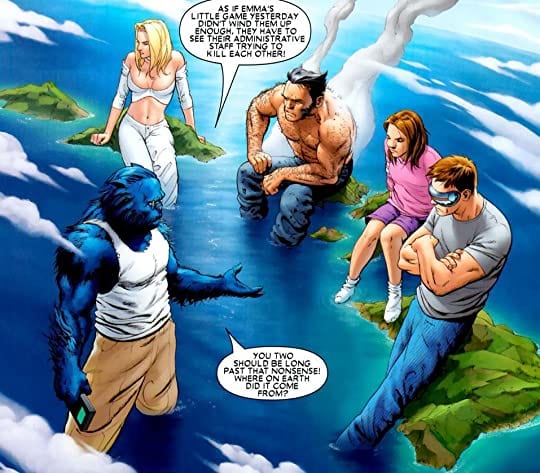 While Cassaday’s lines of detail are the driver of character and action in  Astonishing X-Men, the sharp aesthetic is the result of colorist Laura Martin. Her work walks all manner of tones to while maintaining a slick refinement regardless of what’s happening on page. The lively blues and yellows of the team’s suits to the mottled green of alien skin tones all have texture to their design. The variance in shadow and lighting across both characters and a slew of environments both creates atmosphere and pulls the readers into a believably designed world. Colorists are often unsung heroes in the artistic world, and Martin’s work with Cassaday is proof of why they need recognition. 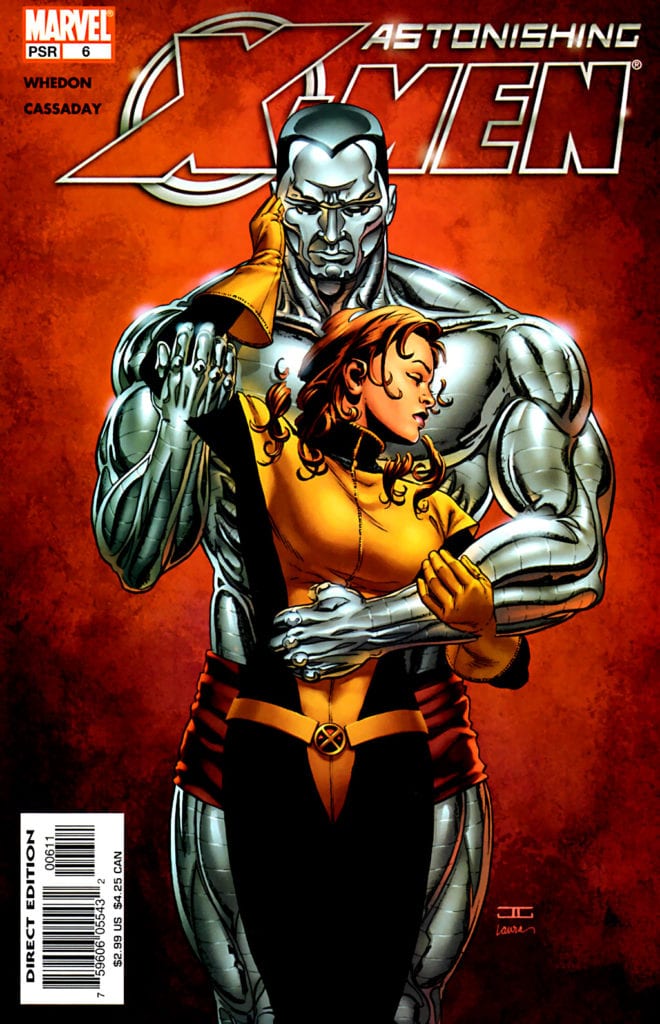 Joss Whedon and John Cassaday’s Astonishing X-Men is cemented as a must-read run among absolute classics. Whedon’s mixture of character analysis, witty humor and tightly knit plotting make for a gripping read from the first issue to the Giant-Size finale. John Cassaday and Laura Martin’s visual work creates a comic that is both cinematic in scope while taking advantage of the unique devices found in the comics medium. However, these accolades can be said about a fair number of great comic series, especially a few X-Men runs. What sets  Astonishing apart is the fact that it still sets forth in a new direction for the iconic characters. This direction continues the trajectory planted by Grant Morrison in  New X-Men while also choosing to realign itself closer to the tastes and decisions of X-Men fand and writers of old. All this and it still finds plenty of new things to say about these comic book icons and the torn anti-mutant world they live in.

A series that succeeds in every regard due to its ability to maintain course for the modern direction set in prior series, while also resorting to brilliant moves to maintain a direct connection to the X-Men stories of decades past.Longbox Legends: ASTONISHING X-MEN & Looking Back to Reach Forward