LOIS LANE #9 is Everything That Makes This Series So Brilliant

Written by Greg Rucka, with art by Mike Perkins, colors by Andy Troy and letters by Simon Bowland, Lois Lane #9 is an unassuming masterpiece. In some ways, it feels like an injustice to write a single article on this issue. A ten-page paper or a college class might be more fitting. It’s the quiet culmination of an already brilliant series, and it’s a creative team at their best. So let the injustice begin:

Rucka knows every character inside and out. Every line or gesture feels like the result of him pouring over all their appearances in the history of comics. Yet it also feels new and fresh. The Question and Batman talk like familiar pals, yet Renee throws Bruce completely off-kilter. We see a side to Batman that feels like a secret we shouldn’t know. But where Rucka sticks the landing in this issue, is his inclusion of immigration. Instead of politicizing his series and drawing a line in the sand of who is welcome to be a reader and who isn’t, Rucka takes the human angle. No matter what side of the aisle you’re on, can you imagine for a second what it would be like to be detained? He dodges political heavy-handedness but retains his authenticity brilliantly. 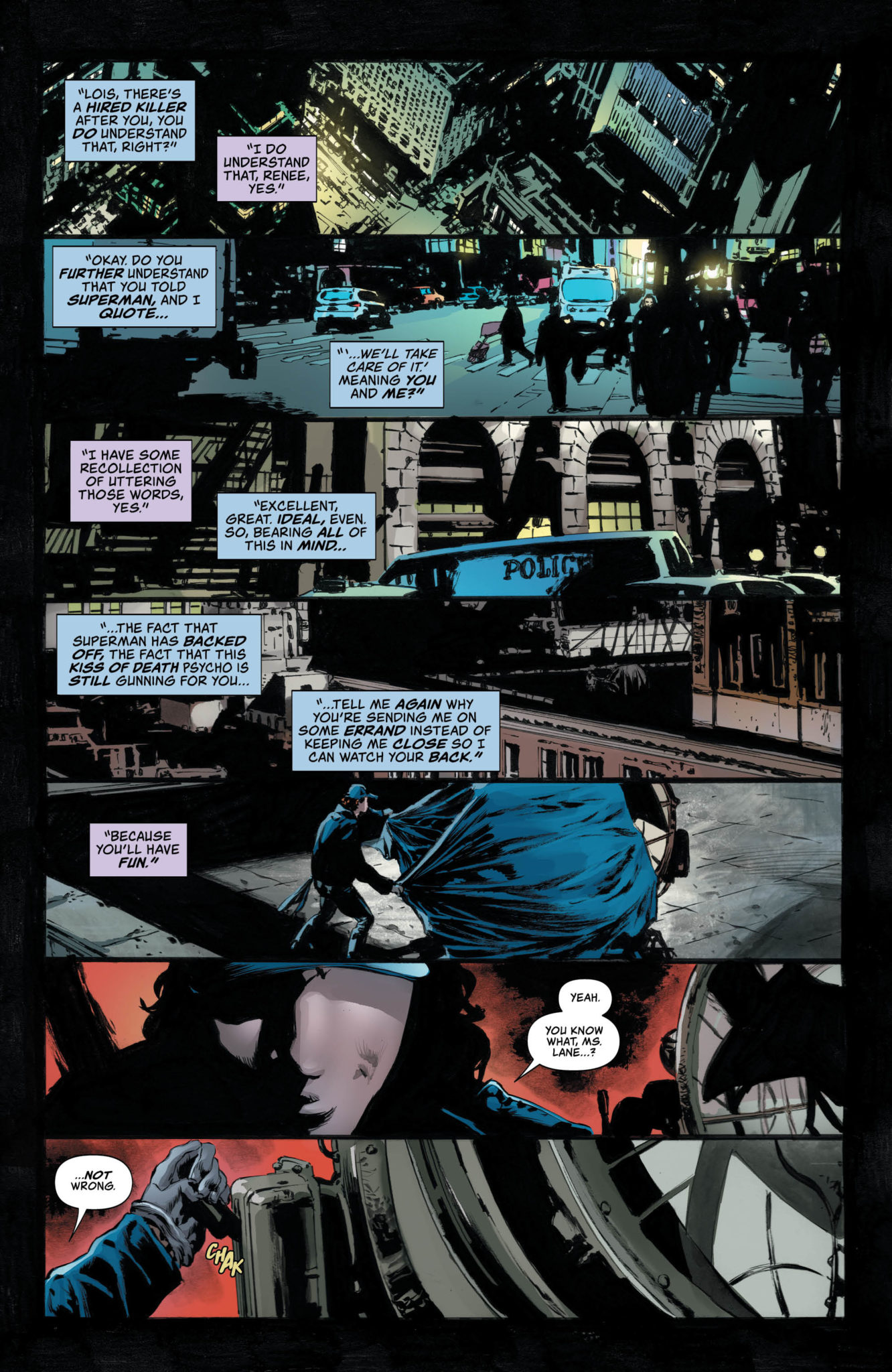 Perkins proves his intimate understanding of each character. He puts smiles on the faces of the perpetually frowning and raises the eyebrows of those who know everything. But each choice feels earned and genuine to the moment. It just feels like it hasn’t happened ever before. After all, nothing about this series feels recycled or used. In this issue, Perkins allows us to see cracks in the masks of the stoic. We see Lois fighting back tears (the fact that she never actually cries drives the moment home.) Then Alejandra tearfully speaks about her lost family. We even see the faceless Question grin. The humanity of the issue is impossible to miss. Even in the rare moments when it happens beneath a mask or cowl.

Troy’s coloring plays against every moment in the issue. He creates balance by giving the darker moments in the writing a splash of orange, and the lighter moments an overhanging shadow. When the Question and Batman talk on a Gotham rooftop, they’re so dark it’s hard to tell where they start and the night begins. But the tone of the writing is surprisingly light. It’s Troy’s work of setting a dim stage that makes the levity of the scene a delightful surprise. Similarly, when Lois visits Alejandra in the detention center, everything is well-lit and clean. And so their conversations, about loss and despair, feel as though they are happening in an unsympathetic world. 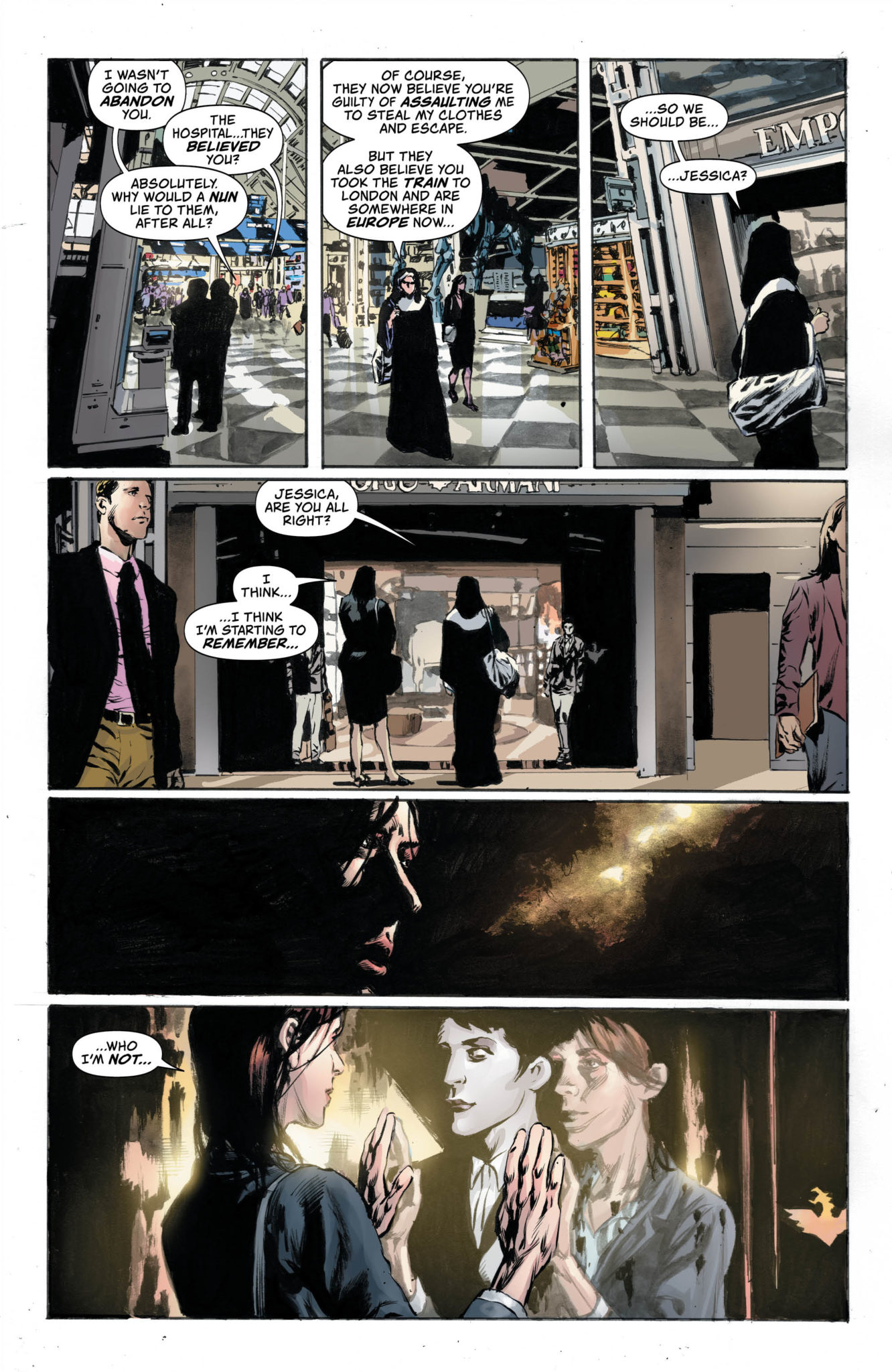 Bowland’s lettering is often easy to miss. While there are a couple of colorful sound effects, few and far between, much of Bowland’s lettering is worked into the artwork. Handwritten letters, signs out the front of buildings, magazine covers. It’s all so seamlessly worked into the rest of the artwork we get completely lost in the world we’re visiting. Yet in bright blue and red letters, he reminds us at the end we’re reading a series. We snap out of it just long enough to go, “Dang, I need to pre-order that next issue.”

At face value, this issue might not seem like much. A few conversations, a brief cameo by Batman, a chase for an off-panel killer. But the sheer humanity and groundedness of the issue make it one for the history books. It’s raw and hopelessly ordinary, in a world of the superpowered stoics. Don’t miss this issue or this run. Pick up Lois Lane #9 March 4th and a comic book shop near you.

2071
Find out how to get the
Monkeys Fighting Robots magazine!

Zac Owens
A world traveler and all-round nerdy guy, Zac is a DC fan and aspiring comic book writer. When he's not writing for Monkeys Fighting Robots he's carefully fitting more books onto his already-dangerously-overstuffed bookshelf. He lives in Halifax, NS for the moment, that is until his Green Lantern ring comes in...

Inside The Box: Defining The Use Of Captions In Blade Runner Adaptation

An array of comics have used Captions for different purposes but ultimately they come down to one of two main functions: Style and Narrative.
Read more
Comic Book Reviews

SQUADRON SUPREME: In The Shadows Of Watchmen

Squadron Supreme is a maxi-series detailing the year-long endeavors of superheroes in the real world. Its release in 1985, put it in direct competition...
Read more
Comic Book Reviews