LOIS LANE #8 Reminds Us Lois Can Handle Her Own

DC Comics’ Lois Lane #8, written by Greg Rucka, with art by Mike Perkins, colors by Gabe Eltaeb and letters by Simon Bowland, gets right to the point this week. After the cliffhanger of the last issue, we get to see Lois and Renee fend for themselves. With the Man of Steel in the wings, we are constantly reminded by this creative team that Lois is no damsel in distress. She’s the Woman of Steel.

Rucka’s plot seems to be slowly coming to ahead. However, Rucka is more interested in the interpersonal conflict or systemic injustices than supervillains. Our introduction to a supervillain in this issue is brief and ultimately anticlimactic, but the anticlimax of it all is what cements our love for Lois. Not only does she defend herself, but she also takes everything in stride. Nothing can rattle her. And despite Superman’s many offers for help, we get the impression he’s someone who is almost twiddling his thumbs. Stepping in at the last moment of each crisis to see Lois and Renee have dealt with it, only to be politely told by his wife to go away. She has it in the bag. 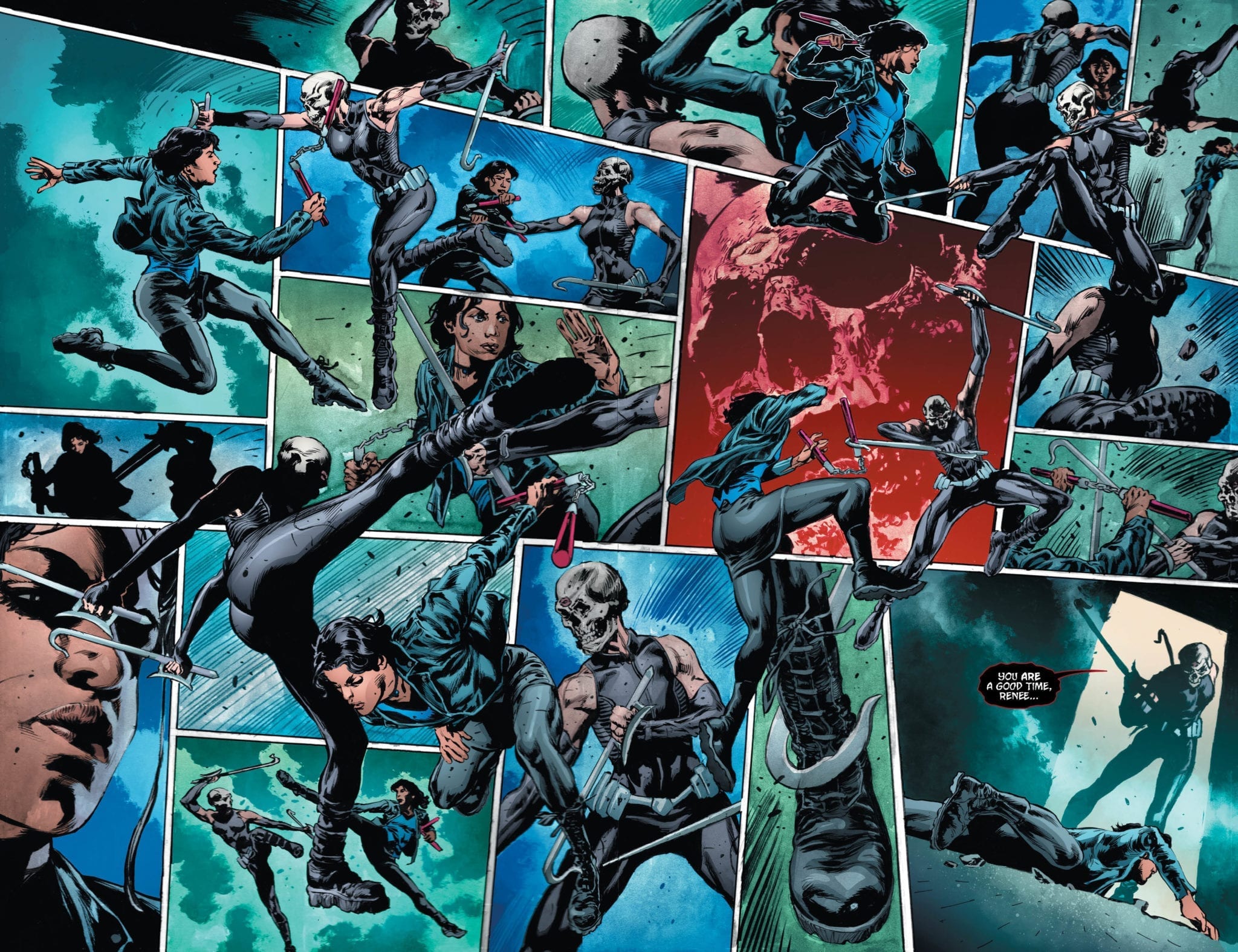 Perkins’ art continues to create the neo-noir atmosphere that this series has lived in. Perkin’s art brings emotion and confident body language to Lois and Renee. While they seem concentrated and sometimes concerned in the midst of chaos, their almost immediate ease once danger has passed speaks to their competence. Lois smiles as the cops investigate, as Renee sleeps in an armchair. When Superman arrives, Lois doesn’t clamber to him but instead gives him a quick kiss and sends him home. Their body language shows their faith in themselves and helps us to have confidence in them too.

Eltaeb’s coloring continues to set a brooding tone. The cool palette, using lots of blues and purples, gives each scene a dark feel. But when the police or Superman arrive, the palette becomes warmer. It opens itself up and feels less closed off. It’s the darkness that reminds us that Renee and Lois are on their own. It doesn’t speak to the danger, as we already know they know what they’re doing. But it gives us a sense that they are setting out into the dark to find the truth. Undaunted, as only they would be. 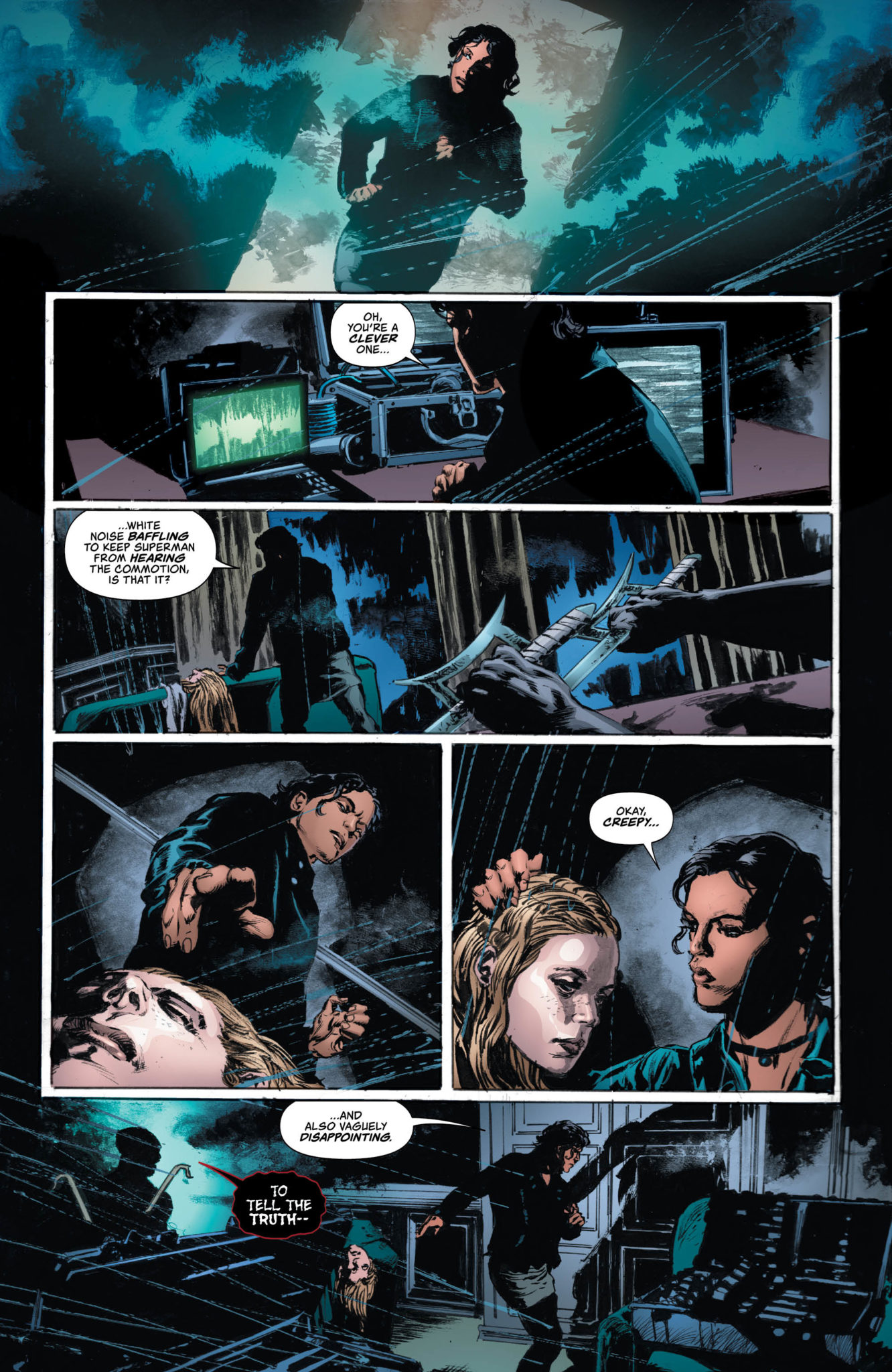 Bowland’s lettering is simple and to the point. It varies rarely, but when it does, it does so to significant effect. The supervillain who has arrived on the scene in the opening chapter speaks in a different style than when she was undercover. It makes her feel otherworldly in a way that gives the character some clout. Bowland’s placement of the word balloons help show the kind of relationship Lois and Renee have. Placed far apart, it makes it feel as though there are long pauses between lines. But these characters are already so comfortable with each other the silence doesn’t irk them.

The creative team once again gives the Woman of Steel the treatment she deserves. Without talking down to her or being heavy-handed about her independence as so often is the case with her character, we get to see Lois as she truly is. The badass who knows what she’s doing can protect herself, and would more likely like Superman to show up to kiss him on the cheek than to be saved by him. This is the Lois Lane that you call in for help, not the one doing the calling. Pick up the next great chapter in this series, Lois Lane #8, at your local comic book shop on February 5th!