Review: LEGION OF SUPERHEROES #2 Fleshes Out The World

The Plot of the Legion thickens!

The Legion of Superheroes has made a return in the DC Universe. They hail from the 31st century where Earth has been broken up into sections floating over the remains of the planet. During Unity Day, where the planets joined to for the United Planets, the Legion bring a guest from the past. Jon Kent meets the heroes of tomorrow, including Ultra Boy. It turns out Ultra Boy has taken the Trident of Aquaman from a group of criminal aliens called the Horraz. Before the Legion can send Jon to a proper orientation to their organization, the Horraz strike out. Will Superboy’s time in the 31st century be over it begins? 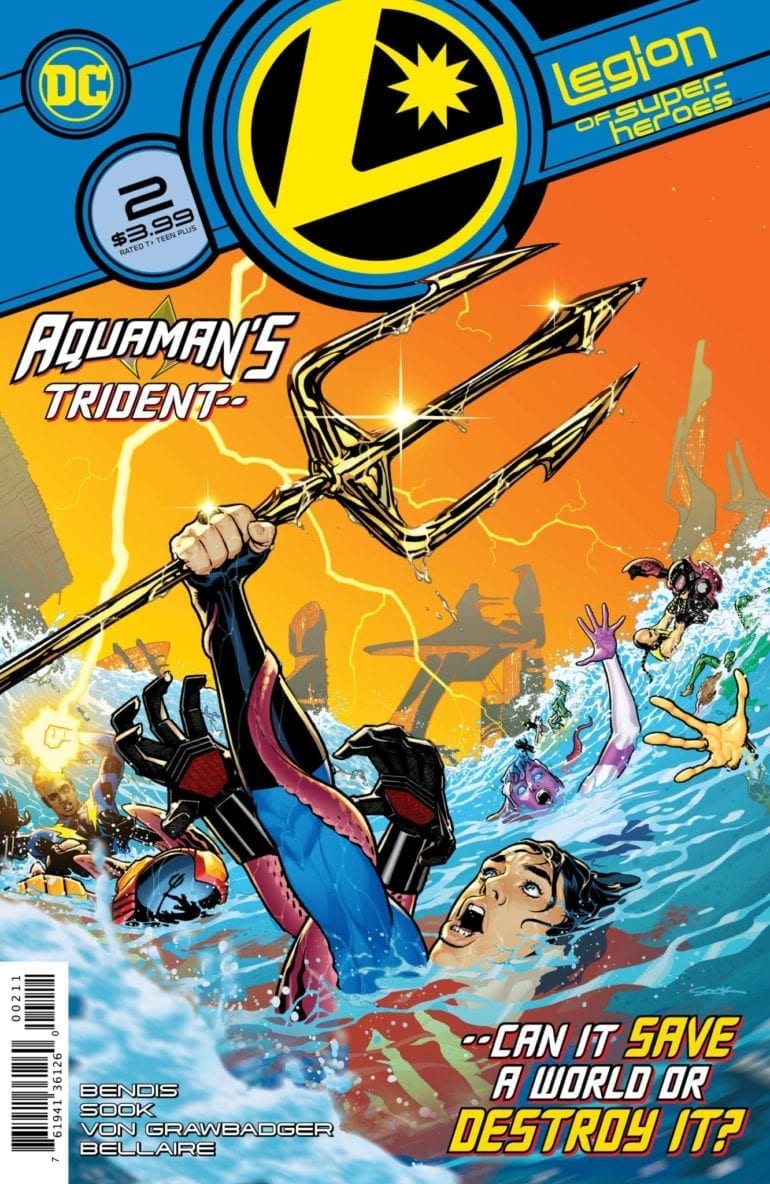 Picking up right where we left off, The Horraz assaults the Legion of Superheroes. They are hoping to regain the Trident of Aquaman to use to help their pursuits. As the Legion begins to get overrun, Saturn Girl tries to shut down their minds through a psychic attack. The problem is she ends up knocking out most of her own team. As the Horraz leader tries to grab the trident, Jon accidentally activates its power. This causes the base to be flooded with seawater, sending the Horraz running.

Meanwhile, the Legion liaison, Rose Forrest meets with the President of the United Planets. The U.P. appears to have an issue with how the Legion does things and demands to be kept informed. 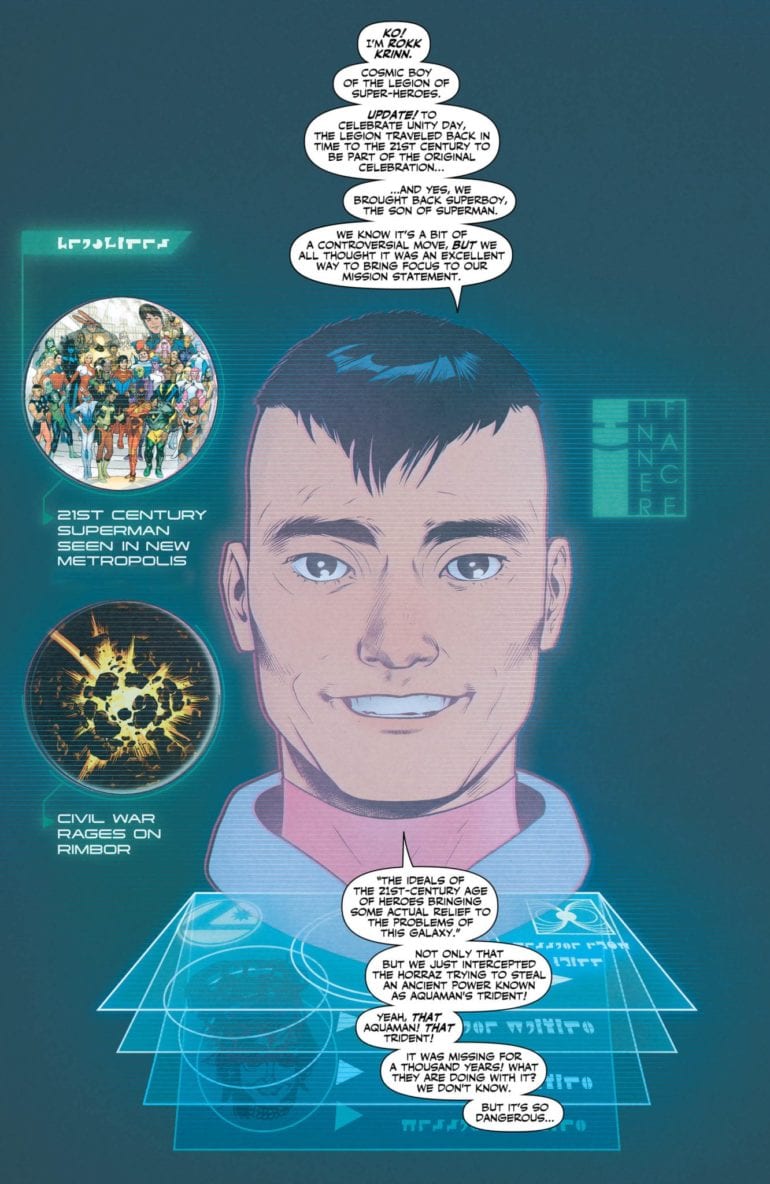 This issue might start out with an epic battle with an amazing conclusion, but it slows down really quick. There is a lot of dialogue in this issue to help Jon and the audience to understand the world that they’ve entered into. While it seems like this would be incredibly helpful, it comes off as a bit boring. They’re talking about a planet that is completely like Gotham and I end up wanting the Horraz to show back up.

That being said, there is one conversation that stands out: The talk between Rose and the U.P. President. You can cut the tension with a knife as it is a true example of verbal sparring. At first, it appears the President gains the upper hand on the teenager, but soon turns around and becomes evenly matched. By the end of the conversation, you want to give the unpowered liaison a pat on the back for standing her ground. 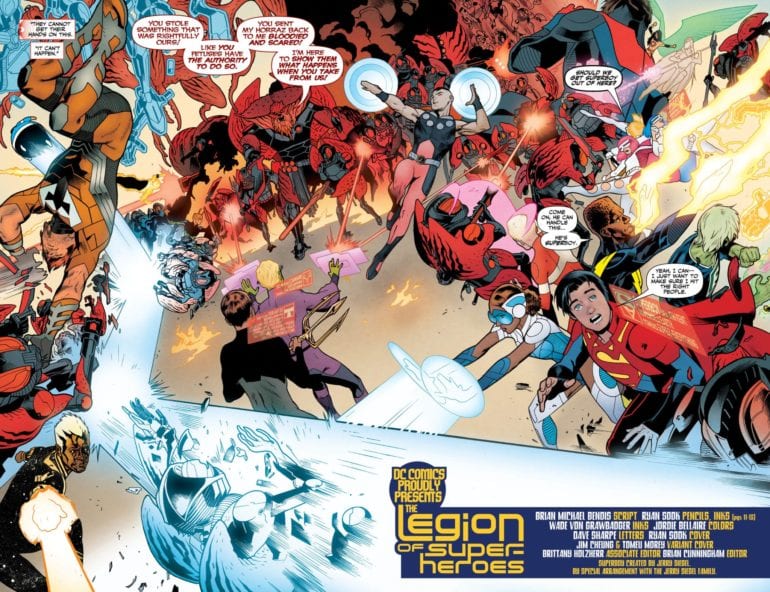 Ryan Sook does a fantastic job of illustrating the future world of DC. He continues to provide a colorful cast of characters that pop off the page, thanks to the bright colorwork of Jordie Bellaire. While there might not be tons of action to draw, he does a spectacular job with it. Superboy inadvertently activating the powers of the trident was breathtaking as it washed away all of the Horraz. When we get more action, I can’t wait to see Sook go all out with the Legion and their powers. I am not sure how long this team will be with us, but it’s clear they’ll keep providing us a great look for this tale. 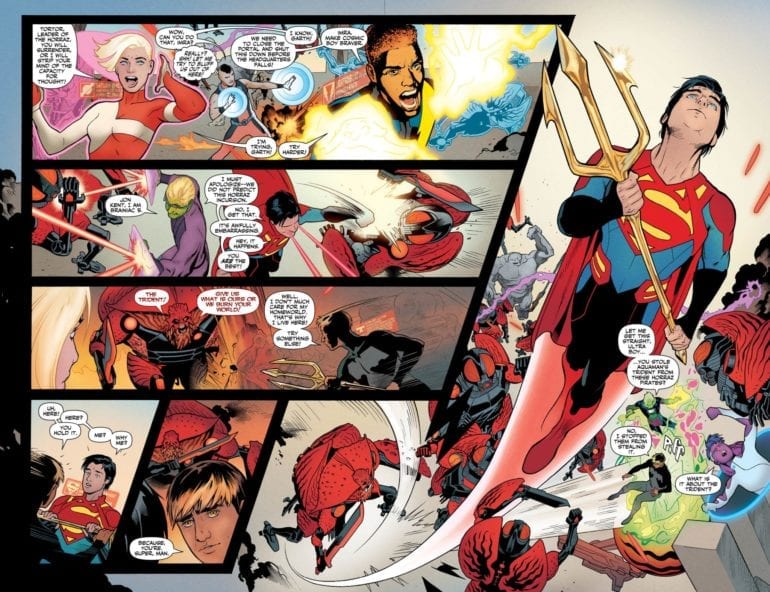 Overall, the second issue of the Legion of Superheroes was an okay one. While I would love to see more action, I understand they are still setting up this world for the readers. The characters are the real reason to come back, as each is becoming more fleshed out as time goes on. The art team knocks it out of the park thanks to their spectacular styles. Add all this to a cliffhanger that will certainly get Super Sons fans excited and the future is looking bright for this series.

The world of the Legion continues to be fleshed out but at the cost of the action.Review: LEGION OF SUPERHEROES #2 Fleshes Out The World