Review: THE LEGION OF SUPERHEROES #1 Returns to a Bright Future

In April of 1958, Adventure comics introduced us to a superhero team from the far off future: The Legion of Super-Heroes. These heroes are aliens and earthlings who were inspired by the adventures of Superman and came back to recruit him when he was a child. Lead by Cosmic Boy, Saturn Girl, and Lightning Boy, the heroes would often be seen as reoccurring side characters in Superman comics but were popular enough to have several series dedicated to them. The most recent adaptation was during the new 52 with Paul Levitz as writer.

When that series was canceled six years ago, the team just disappeared. With Brian Michael Bendis, they return with a new time period and look. How will our Legion soar this time around? 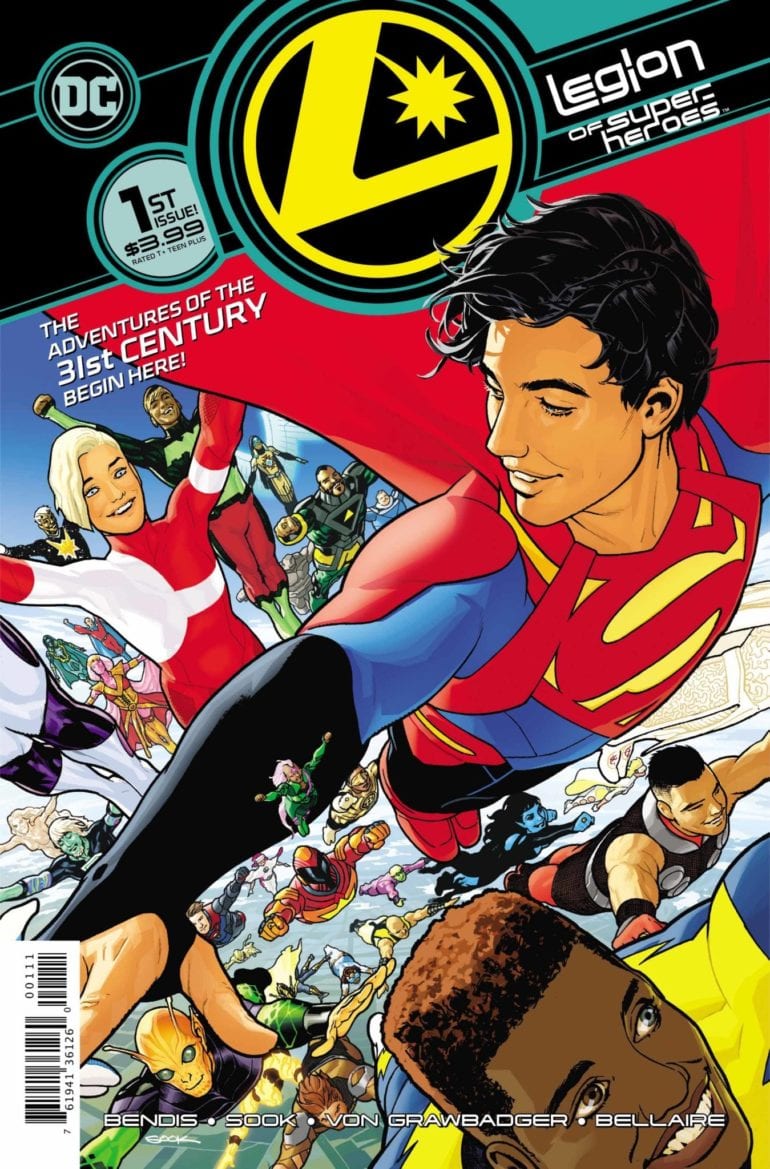 We open with an exciting car chase on the planet Gotham. Ultra Boy has recently stolen something from an alien race known as the Horraz that could help save a planet. When their leader, Mordru, tries to steal it back, Karate Kid, Wildfire, and Star Boy rush in to help. They defeat the monstrous gang leader, and it’s revealed he was trying to steal Aquaman’s trident.

Meanwhile, Saturn Girl introduces Jon Kent to the rest of the Legion. This basically becomes a dream come true as he finally feels like he’s a part of a larger group. This feeling soon fades when he learns that by this point in history, the Earth has been broken. 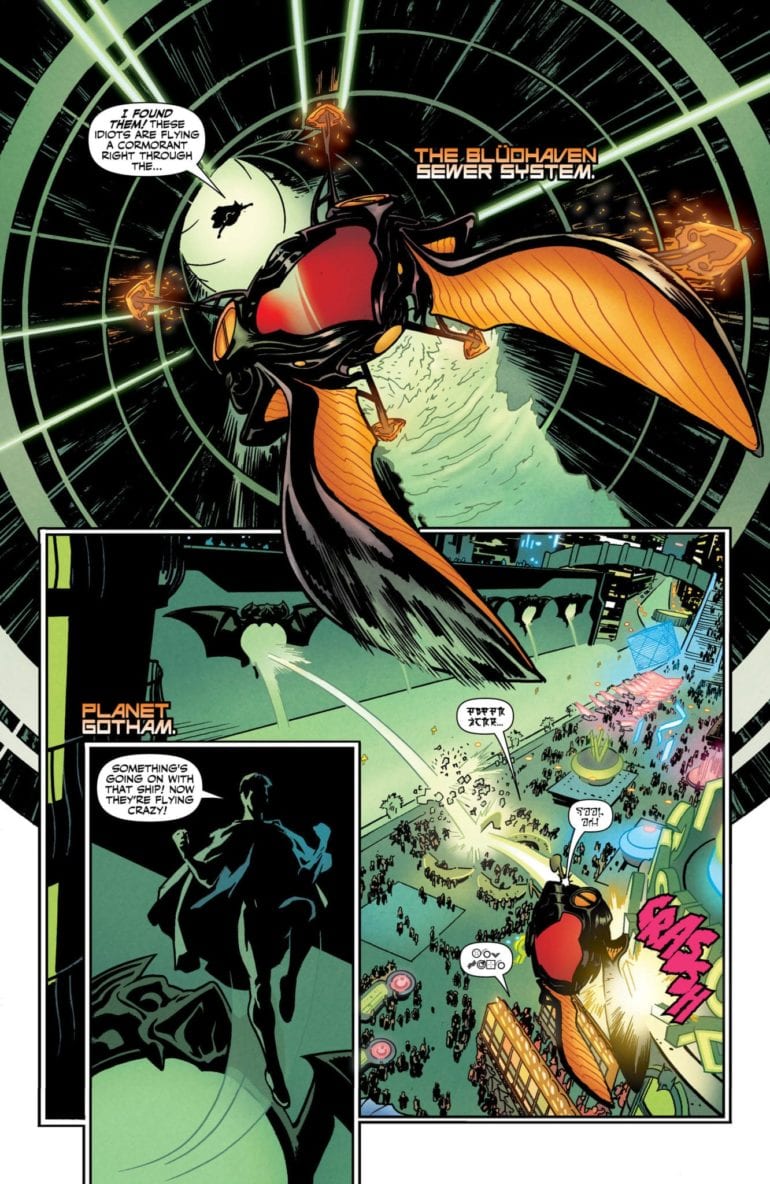 This issue is what you would call a mixed bag of qualities. The biggest positive is definitely the fantastical universe the Legion exists in. It’s full of neat aliens, references, and tons of action. It makes me want to learn more about what exactly happened to Earth. What happened to the oceans? How many Batmen were there? Why is there a system that shows off the Legion codenames? Questions like that are currently whizzing around in my mind, and I really want answers!

The downside, unfortunately, is the fact that for new readers, it is too much. I can only just follow since reading the Legion Millennium two-parter from last month. If one were to go into this without reading that or know what the Legion is, it would leave a lot of people confused. First issues need to give a balance of introducing readers to the world and calling back for long-time fans. This leans more towards the latter and needs to even itself out. 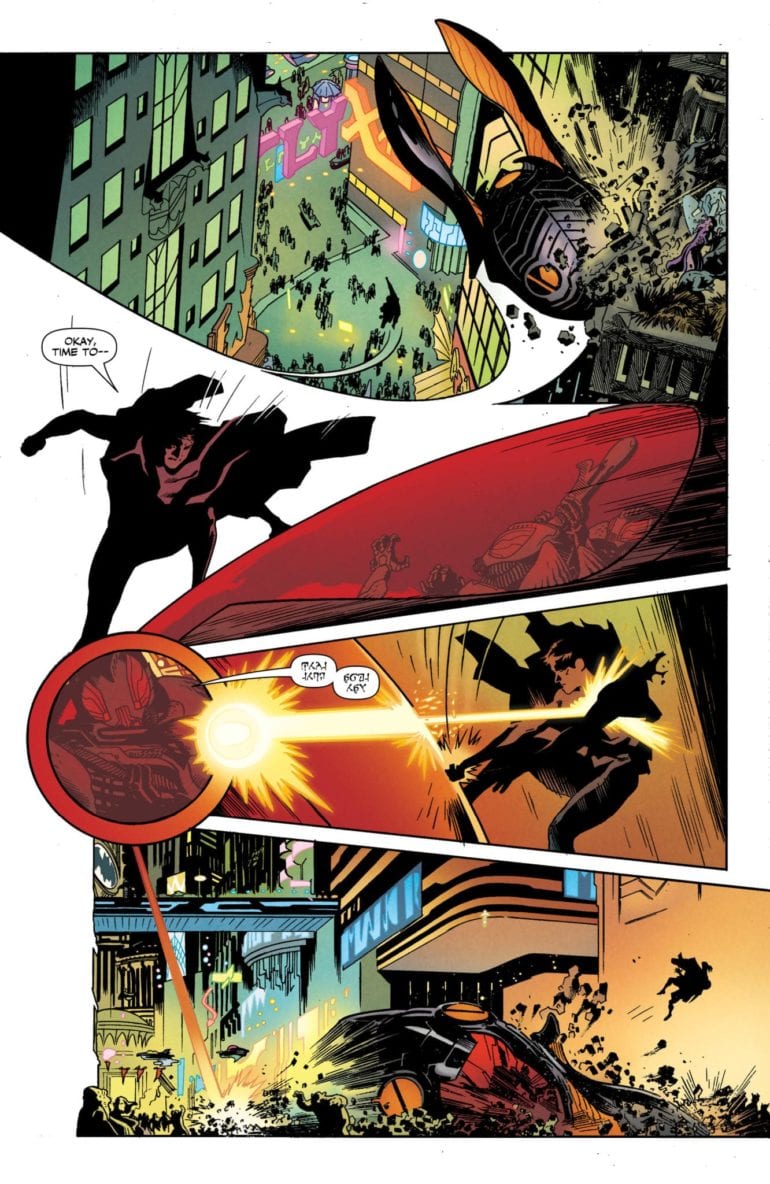 The artist for this first issue is none other than Ryan Sook. I have to say; he certainly knocked it out of the park for this opening issue. The hardest art challenge for the Legion series will always be the Legion themselves. Due to their large cast, it can be daunting to make different looks for every character, let alone make them look good. Thankfully Sook does masterful work updating every hero, including Superboy himself. These looks are only made better thanks to the fantastic colorwork from Jordie Bellaire, allowing the world to feel full of life. Love or hate the story, you can’t say that the art team didn’t give it their all. 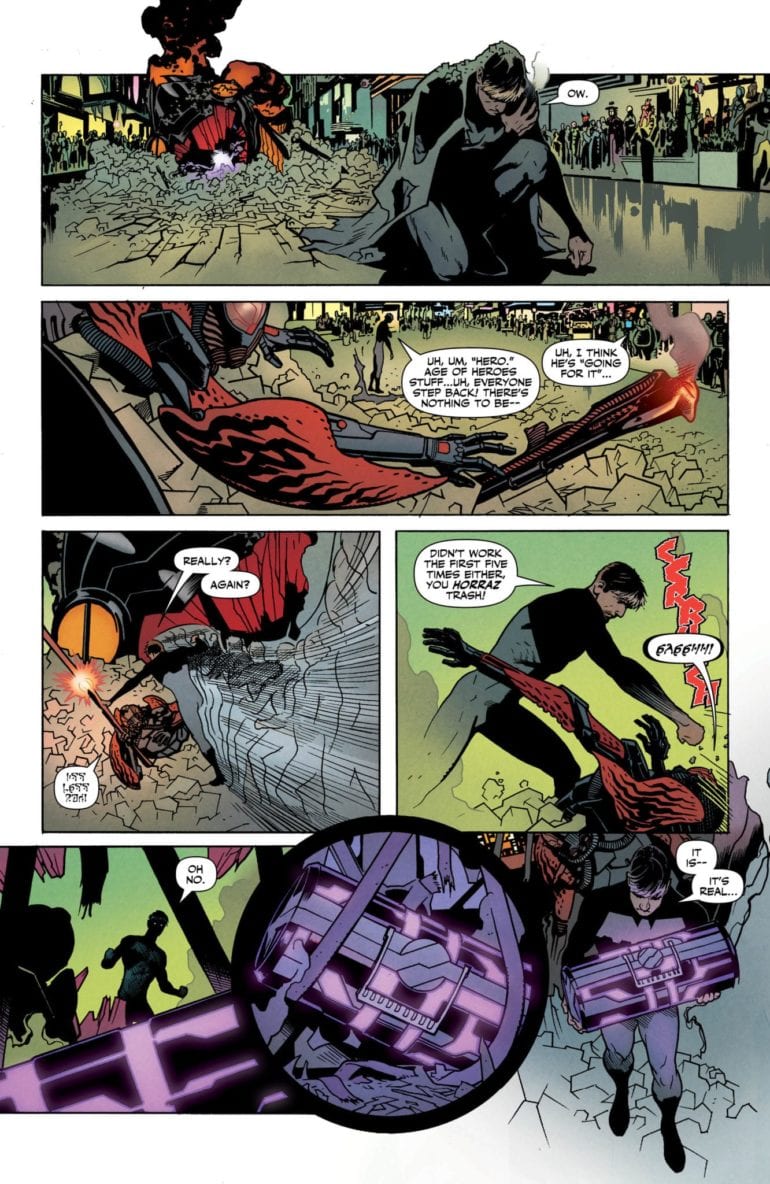 Overall this was an “Okay” start to the Legion of Superheroes. While it feels overly stuffed, the universe is full of intrigue and action that could bring readers back, with an impressive cast of characters. The art team definitely carries the weight of the packed story with stellar artwork. It might not be a perfect opening, but the team definitely has an idea of what the Legion is. I’m excited to see where we’re going in the 31st century.

While art and setting are fantastic, the first issue of The Legion of Superheroes suffers from too much information being forced in.Review: THE LEGION OF SUPERHEROES #1 Returns to a Bright Future