Interview: Lance Briggs and Kyle Higgins Take Us Into THE TRAP

Monkeys Fighting Robots caught up with former Chicago Bears linebacker Lance Briggs and writer Kyle Higgins to chat about their new Kickstarter project The Trap, football compared to art, and the influence of the giant elephant in the room, the political climate of today.

Earlier this week, Briggs announced the Kickstarter for his passion project. 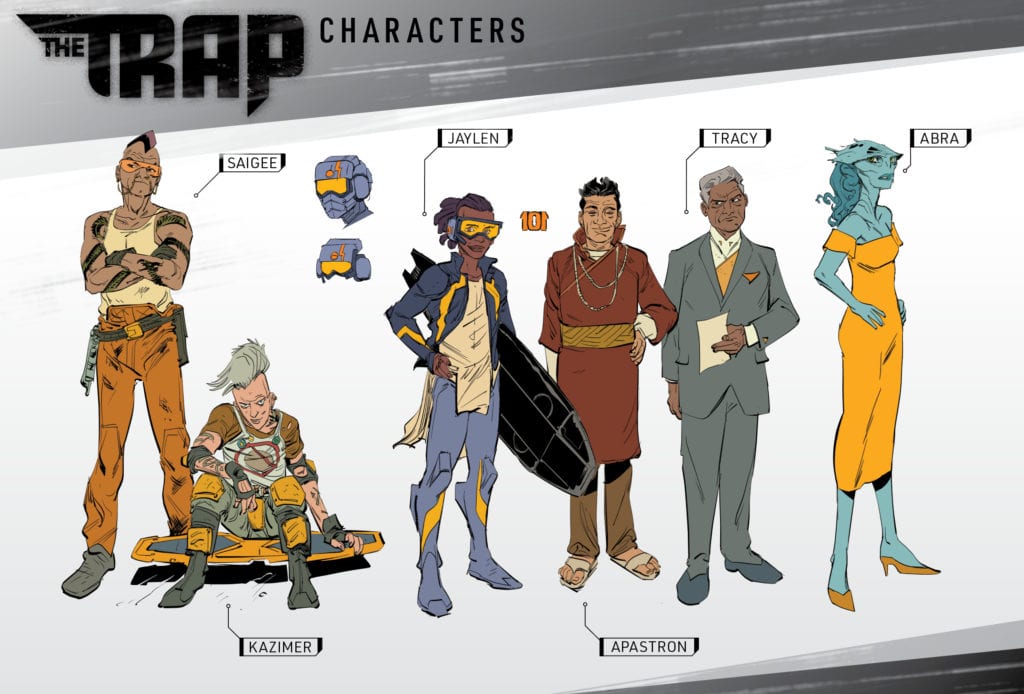 About the book:
In THE TRAP, Jaylen Robinson is a rising sports star from a not-so-great part of the galaxy: Earth. He’s worked hard his whole life. Everyone’s saying that Jaylen is the Next Big Thing for the interstellar sport of the future: surfriding. The future is his. This is his chance. Until it’s not. You can support the project here: THE TRAP

MFR: Lance, your Kickstarter statement is powerful. Did you need to make The Trap?

LANCE: One hundred percent. It’s a story that’s incredibly personal to me, both because of my background as well as the issues we’re looking to discuss and shine a light on. And creating Jaylen, for me, is also a way to talk to so many kids that are living in less-than-ideal environments. Amongst systems that have failed their own. I see you, and I want you to know — you are special. Even if it doesn’t feel like it.

This book is also an opportunity for me to start doing something that I’ve always dreamed of — sharing my imagination with others. My imagination is what kept me going as a child, as an athlete, and now as an adult. Dreaming of what is possible, even if it seems impossible, is so incredibly important. And writing has been a great way for me to tap into that more and more.

MFR: What was the world-building process like? Did you push the creative envelope and then reigned it back in, or was there a specific creative vision to expand from?

KYLE: Well, for me, world-building has to come from narrative intent. Meaning, I don’t world build just to world build — I world build for the sake of the story I’m trying to tell. So, THE TRAP started with figuring out the core idea of the series — that in the future, Earth has been annexed into an interstellar coalition of planets, but due to certain events over the generations, we’ve become both the red-headed stepchild of the coalition, as well as prime real estate for the interstellar drug trade. So what that does is it creates a situation and a status for our world where the problems of marginalized communities are the problems for all of us. Because we are all in “the trap” together.

From there, we were able to start really building and refining characters, as well as different aspects of this world to really strengthen the allegory.

LANCE: Right. What do sports of the future look like? What kind of escapism, entertainment, politics, business, etc. would exist?

KYLE: Lance came up with the idea for surfriding, which I love. It was a tricky thing to figure out — the sport of the future needed to be something that multiple species and races could compete in, since it was going to be Jaylen’s best chance of getting out of The Trap and potentially bettering his life off-world. A board based racing sport totally fit the bill.

MFR: Kyle and Lance, talk about your emotional reaction the first time you saw Danilo Beyruth’s work on The Trap.

KYLE: Oh, man. I was so excited. I think, Lance, we both looked at the designs and went—

KYLE: Exactly, yeah. Like he’d been there the whole time. Fully formed. Just waiting to be drawn.

LANCE: What made it even cooler was when Tamra started putting down colors for him.

KYLE: Yes. Absolutely. Tamra is one of the best in the business, and being able to work with both her and Danilo… we feel incredibly lucky.

MFR: Lance, how has working on the Football Aftershow helped you become a better storyteller?

LANCE: It’s taught me patience, more than anything — having to listen to Alex Brown’s false narratives and falsified facts with a straight face! (Laughs) It’s torture, but I fight through it!

MFR: Lance, with playing football at the highest level, there are nerves, but you control your destiny with your play. With art, you put yourself out there emotionally. What are those nerves like?

LANCE: Well, I’m still figuring that part out. But I guess what I would say, is that in football… you’re talking about moments that last 8 to 12 seconds. And of course, you get nervous. Anyone who says they don’t, they’re lying. And if you actually don’t get nervous? Then I don’t think you care to be great. But, I knew that no matter how nervous I would get… I knew I was prepared. Compare that with writing and publishing stories? So far, I don’t know that they’re even comparable. Kyle and I have a process built on trust and respect, so it’s very low risk and low pressure — we talk through everything. If I were doing it solo, I’m sure it would be different.

MFR: Kyle and Lance, the past four years, have been a political dumpster fire of division. How has the current state of the world influenced The Trap?

KYLE: I think the better question is… how has it not? The issues we’re dealing with are not new. But over the last four years, I don’t know how you could argue that they’ve gotten any better.

LANCE: They haven’t. We’re looking to talk about some of them here, through science fiction and storytelling. Hopefully, to show people the issues in a new, hopeful objective — but also relatable — way.

KYLE: If anything, the last four years have really opened my eyes to just how deep the wounds in our country are. And how many of them are not anywhere close to being closed or healed.

MFR: Lance and Kyle, thank you again for your time and best of luck with The Trap!

Have you backed The Trap? What are your Kickstarter buying habits like during the pandemic? Comment below with your thoughts.