About the book:
In THE TRAP, Jaylen Robinson is a rising sports star from a not-so-great part of the galaxy: Earth. He’s worked hard his whole life. Everyone’s saying that Jaylen is the Next Big Thing for the interstellar sport of the future: surfriding. The future is his. This is his chance. Until it’s not. 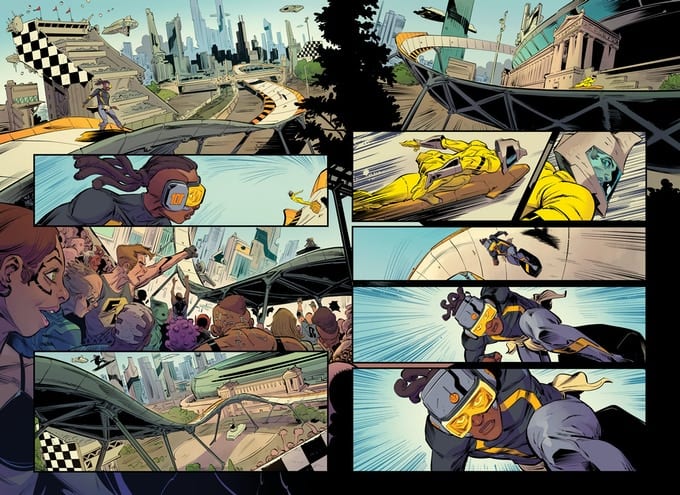 Briggs’ gives an inside intimate look at the meaning of The Trap:

Before I played professional football, my life was very different.

I grew up in Sacramento, CA during the 1980s and 1990s, with my mother and two older sisters. But while many people hear “Sacramento” and associate it with a place of power and decision making in the state of California, the reality— for many of its residents— is anything but.

Our family struggled no differently than most in the south area. There were times when the pantry was bare and the fridge was empty. Days or weeks without power. Waking up to cold showers before school.

For those of us who came of age in an environment like this, we have a simple name for it: The Trap. Put simply, the name translates to a community that has been failed by its governing bodies. The Trap is both a neighborhood and a resulting way of life— a system designed to keep you from succeeding.

Living in an environment like this comes with an inherent sense of hopelessness. It feels like no one cares about you, like you have no voice, because when you try to use your voice it’s met by common refrains like ”just work harder,” or “comply with the police and you won’t get hurt.” But the truth is far more bleak, made up of liquor stores on every corner, drugs at every turn, constant police stereotyping, shootings, siblings in the house suffering from addiction and eviction notices because your brother stole everything your mother had.

In The Trap, there are very few ways to make money. As a result, residents resort to selling drugs or gang life, which leads to jail time, which then leads to even fewer job prospects. And so, the cycle repeats.

Fortunately for me, I was able to escape. A path towards professional football and a mother who refused to let me fall through the cracks helped me to stay focused. In no small order, both saved my life.

But I am the exception rather than the rule.

The reality is, that few people really understand how easily their lives could have gone a different direction had they simply been born in a different situation— environments, after all, breed influence. When you grow up in The Trap, you do what you have to and become who you have to be, purely to survive.

I’ve spent the last several years, post-retirement, wondering how we give context to issues that too many people disregard, because they don’t apply to them? If you’ve never lived this life, how could you possibly understand it? How do we show people that the lives of the economically and marginally oppressed are just as valid as their own?

The Trap will be presented in an oversized, deluxe format hardcover (8 ¾ x 11 ⅝ ).