Interview: Darick Robertson on His Process in SPACE BASTARDS

Chances are, if you visit Monkeys Fighting Robots a lot, you’ve heard a little about Space Bastards already. That’s because the wonderful people at Humanoids have been super generous in giving us information on this awesome new series. We’ve reviewed the first issue, which was a blast, and interviewed writers Eric Peterson and Joe Aubrey. But the fun doesn’t stop there! MFR got to send in some questions to superstar artist, Darick Robertson, best known for his work on The Boys. Robertson gave us amazing behind the scenes looks at his process and talked about his role in forming the world of Space Bastards!

Monkeys Fighting Robots: From what I know of your work, Mr. Robertson, Space Bastards just seems like a perfect title for your style. How soon did you know you wanted to join the project?

Darick Robertson: Actually, it took some persuading. Not because I didn’t see the potential, I was just so busy with other projects at the time that I didn’t see room on my plate for anything more than a few covers for the original Kickstarter inception that Joe & Eric had. Eventually, I got to know Eric and Joe better and they came at me with an offer to fund the project and make me a co-creator of the property, and with that I got on board and set about redesigning the characters and the visual world.

MFR: You’re working on Space Bastards for the first volume, “Tooth & Mail,” featuring the characters Manny “The Manicorn” Corns and David S. Proton. What was the process like working with Peterson and Aubrey to bring these characters to the page?

DR: Actually, the work was completed back in March of 2019. I penciled and inked over 200 pages for this first arc. Working with Joe and Eric was fun, in that they have such a deep rooted passion for the characters and story, going back to making short films about the cast years ago. Joe has a keen eye for continuity and details, while Eric is happiest it seems when discussing story ideas and making things work. They both have a great sense of humor and are a lot of fun to be around. Promoting this with them years back at San Diego Comic Con was some of the best times I’ve had there.

MFR: This is a really cool futuristic, maybe even dystopian, world that you’re a big part of creating. Most people reading Space Bastards are going to see your version of this world first, and artists that follow will likely take cues from you as well.

DR: That’s been the case, yes, the forthcoming artists are working from my initial designs from what I can tell.

MFR: What about that was challenging?

DR: The only challenging part was the schedule, as I was pouring a lot of detail into the pages and also taking the scripts and tinkering with it, so that I could navigate the pacing of the story, page turns, and panel management. We ended up with like five drafts of the first issue script.

Even with the most experienced of comics writers that I’ve created with, I tend to work things out on the page so things flow a certain way and I’ll bring suggestions and workarounds. Being somewhat new to this format, Joe and Eric had essentially taken their screenplay and had converted it into a comic script format, with page breaks and some panels with sizes suggested, but ultimately they wanted me to have fun with it and do my thing, so that took a little getting under the hood in places and making things flow visually.

There’s a thing that happens between screenplays and comics that people unfamiliar with the format don’t always recognize and it’s how the ‘real estate’ of a comic page is different than how things play out on film. In a film, you don’t have to leave room for the dialogue or the sound effects; The characters just speak. But in a comic, if a character is making a big speech, then backgrounds and things like that, are going to be obscured. So the scripts would have suggestions for panel sizes, but often I’d come back with suggestions how we could keep the point of the moments but play it out a bit differently. When inking my own work I pencil very loosely, just to get the story beats established and then present it to the writer so we are in agreement before I go and put all the ink detail in.

For example, this is a place where I suggested breaking the melee into multiple panels across the top and have the parcel transferring in every panel of the melee might work better as a gag… The story is the same, I just changed up the beats a bit, and Joe and Eric loved it. 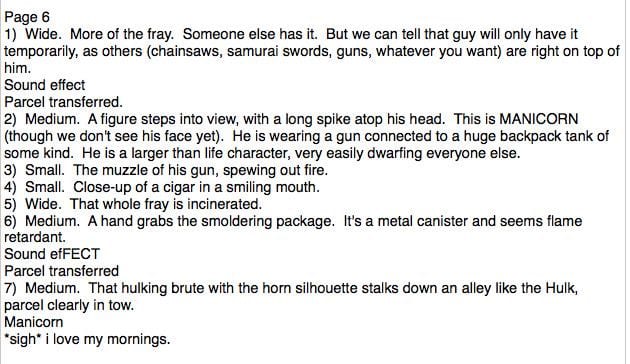 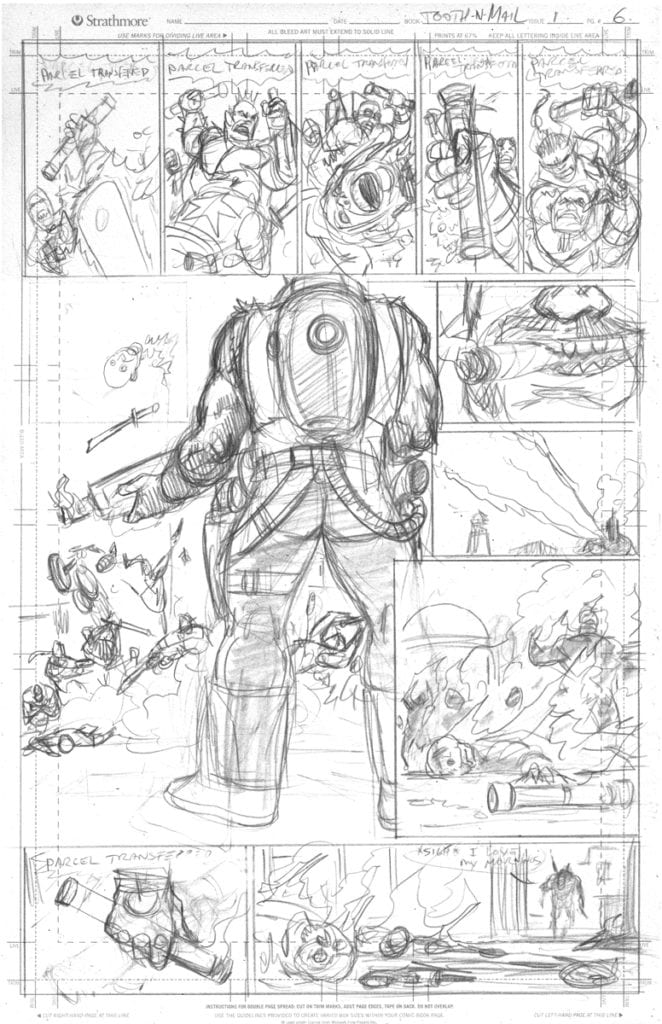 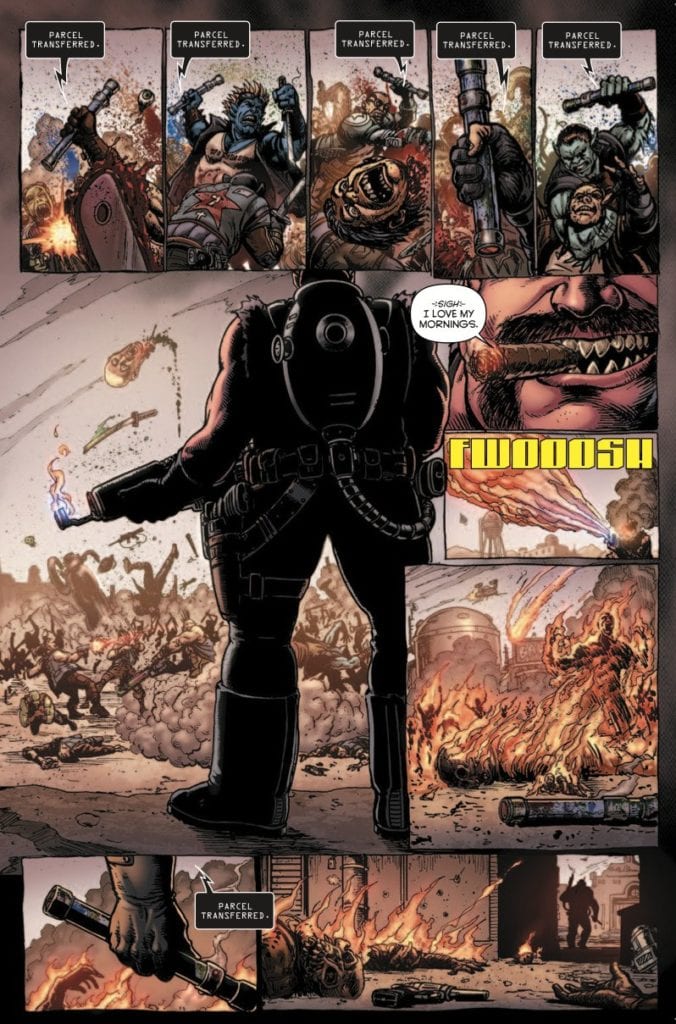 MFR: What about it was exciting?

DR: It’s a really imaginative platform and concept they created, and anything seemed possible. That’s one of the things I loved about Transmetropolitan and Ballistic; the worlds where I can create in a space where anything goes are the most fun for me. Joe and Eric like to push boundaries and create outrageous scenes, and trying to capture that lightning in a bottle was fun. I really wanted to maintain that crazy energy we had at the beginning of the project and bring that forefront for the story.

MFR: In the first issue, you do a great job of giving us visual cues of the dynamic in the room, particularly with Proton and Manny.

MFR: Manny towers above anyone, but you really show us just how much bigger and better he is than Proton. The first scene of the issue, a flash forward, shows us there are going to be lots of characters joining the cast. As dynamics shift and as we get more people on each page, did you change your approach of using size and position to show power?

DR: Yeah, that did become challenging as the final issues I drew are absolutely bonkers. I was drawing the whole cast, which you can see on my virgin variant cover for #1, and multiple locations with things happening simultaneously in space as well on Roy Sharpton’s crazy refuge planet with alien dinosaurs and absolute craziness going on. But my approach remained focused on telling the story through character dynamics and such… in issue 3 you’ll see how Davey has grown in confidence and skill, but how Manny remains a threat. 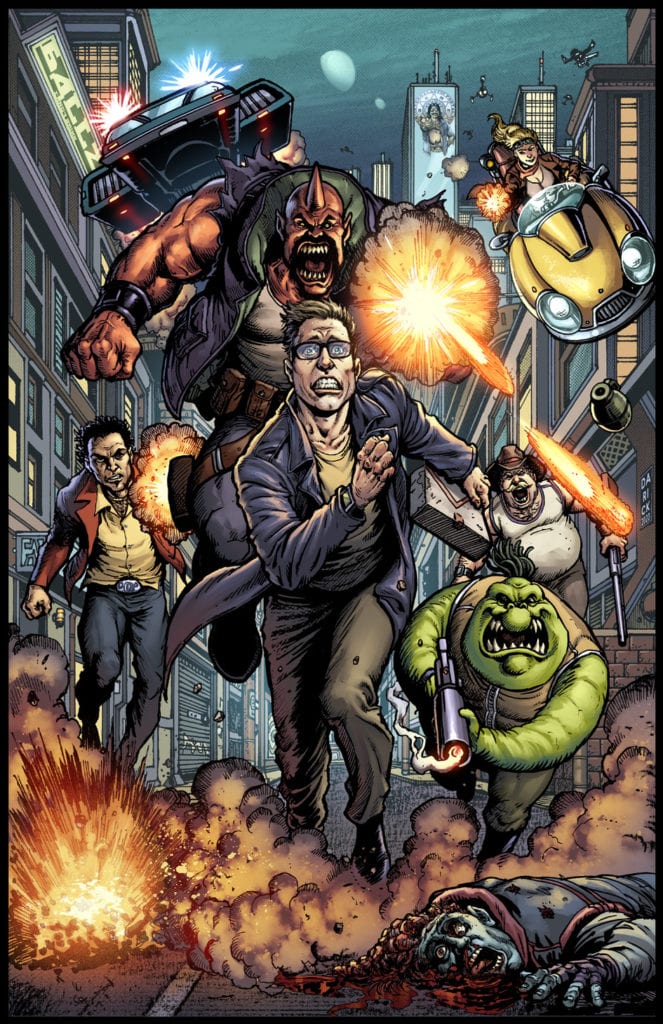 MFR: Space Bastards is a perfect series to just go on and on, with a revolving door for new characters. Hopefully, it runs for a very long time. It certainly deserves to. In that case, do you hope to come back and do the art for more issues in the future someday?

DR: Yeah, I’d be into revisiting this. I designed and co-created these guys, so there’s a little bit of an attachment there… doing the Virgin cover, which I created recently, was the first time I revisited this world since I finished the art in 2019 and it was like hanging out with old friends.

MFR: Last question. What exactly do you have againssst Lizard People?

The first volume of Space Bastards, published by Humanoids, is written by Eric Peterson and Joe Aubrey, with art by Darick Robertson, colors by Diego Rodriguez and letters by Simon Bowland. And starting in the second volume, writers Peterson and Aubrey are getting a bunch of different artists in for a one-shot, a couple annuals and some specials. Artists include such talents as Simon Bisley (Lobo) and Clint Langley (2000AD)!

Jump aboard the Kickstarter to keep so this wild series keeps going, and so Peterson and Aubrey can pay advances to their awesome artists! And for all other Space Bastards information, go to Spacebastards.com!