Nick Spencer’s Amazing Spider-Man epic “HUNTED” concludes this week. Kraven puts Spidey in a classic hero dilemma, forcing him to make a tough decision that might change him forever. 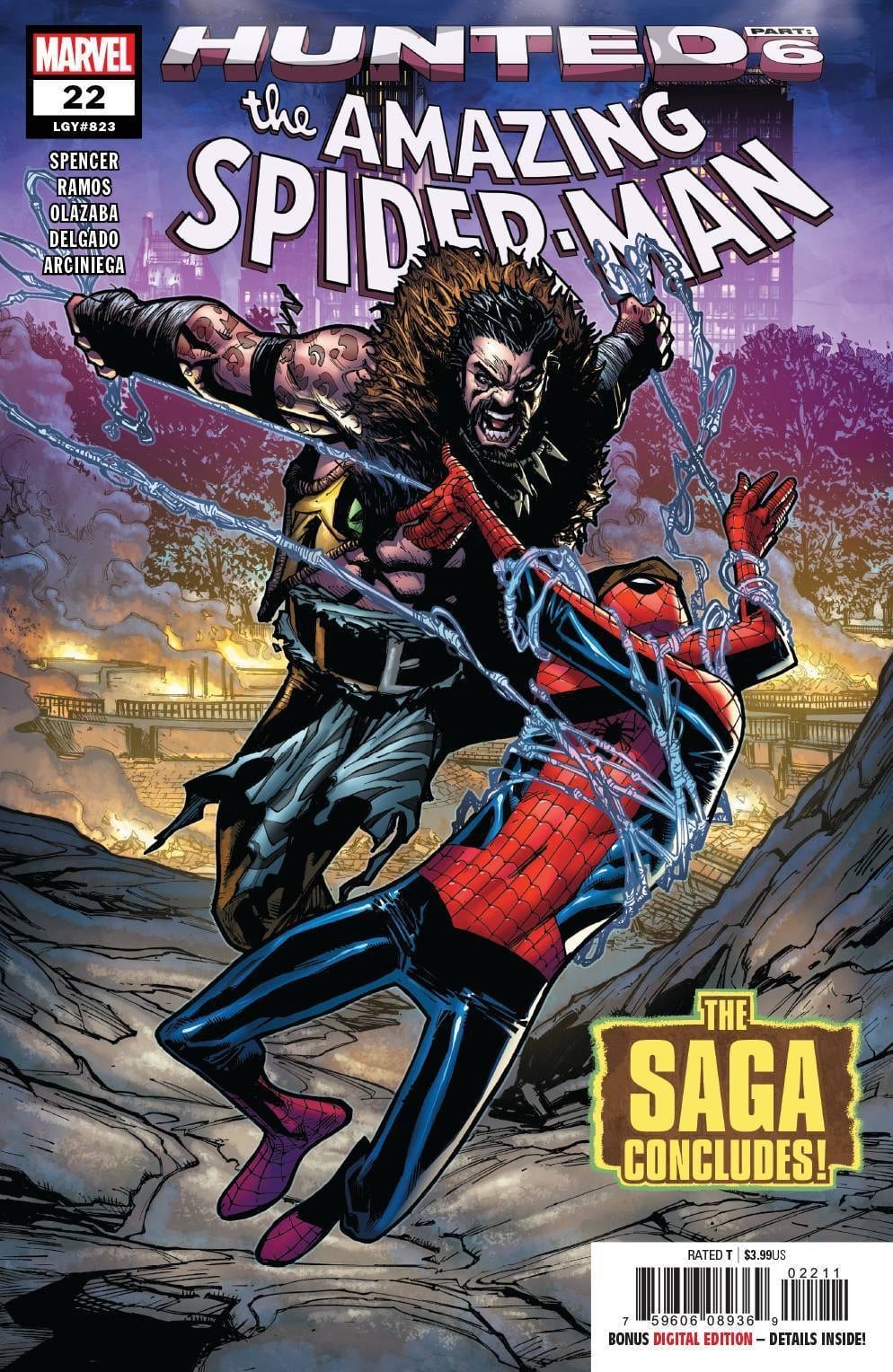 Kraven’s final play is revealed, forcing Spider-Man to kill him in battle if he wants to save the lives of both Black Cat and Billy Connors. These life or death scenarios are nothing new for Peter Parker, but that doesn’t make this one any less challenging!

Hunters and the hunted is all Kraven sees the world as and tries to convince Spider-Man that this is the only way to protect those he loves. Spidey overcomes his trickery and proves that what Kraven perceives as weakness is actually what makes people strong, to rise above ideals such as his.

Spidey overcoming Kraven, he realizes that he is “the beast” and destroyed all of his own family to prove an invalid point. In a truly shocking twist ending, Kraven honors the sacrifice of “the spider” by once again donning the Spidey suit and having his clone-son murder him. 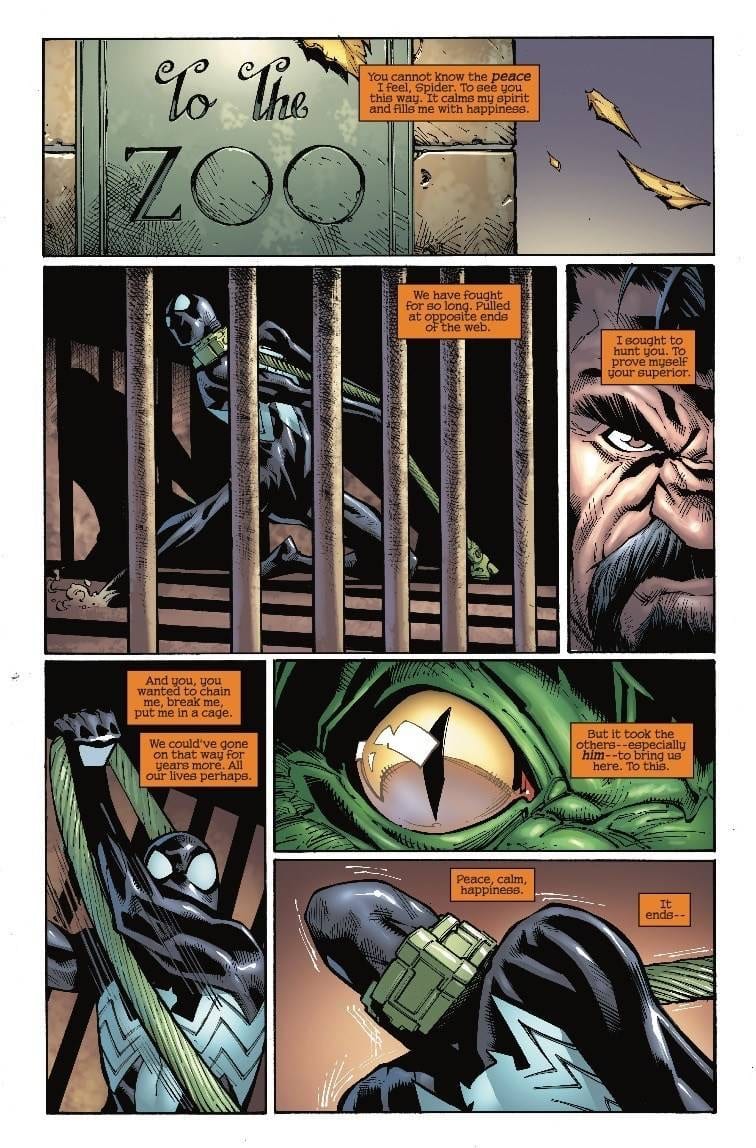 The final punctuation mark on this “HUNTED” story is a tragic and bold one. As far as the story goes, it’s a wonderful wrap-up to Kraven’s longstanding arc. As far as continuity goes, Nick Spencer just masterfully reloaded the Kraven The Hunter role with his clone-son’s new hatred for Spider-Man as he’ll most likely blame Peter for the murder he just committed.

Nick Spencer crafted a story that’s much more than heroes punching villains. This has lasting consequences, major growth and development, and a heartbreaking finale. “HUNTED” is all-in-all a fantastic Amazing Spider-Man story.

This was a show-me effort for anyone doubting Spencer’s ability on this Amazing Spider-Man run. He’s a master at short, contained stories. He has a talent for slow-burning background developments. Now we all see that he is more than capable of crafting a larger scale epic that delivers from beginning to end. This one doesn’t fizzle out, that’s for sure. 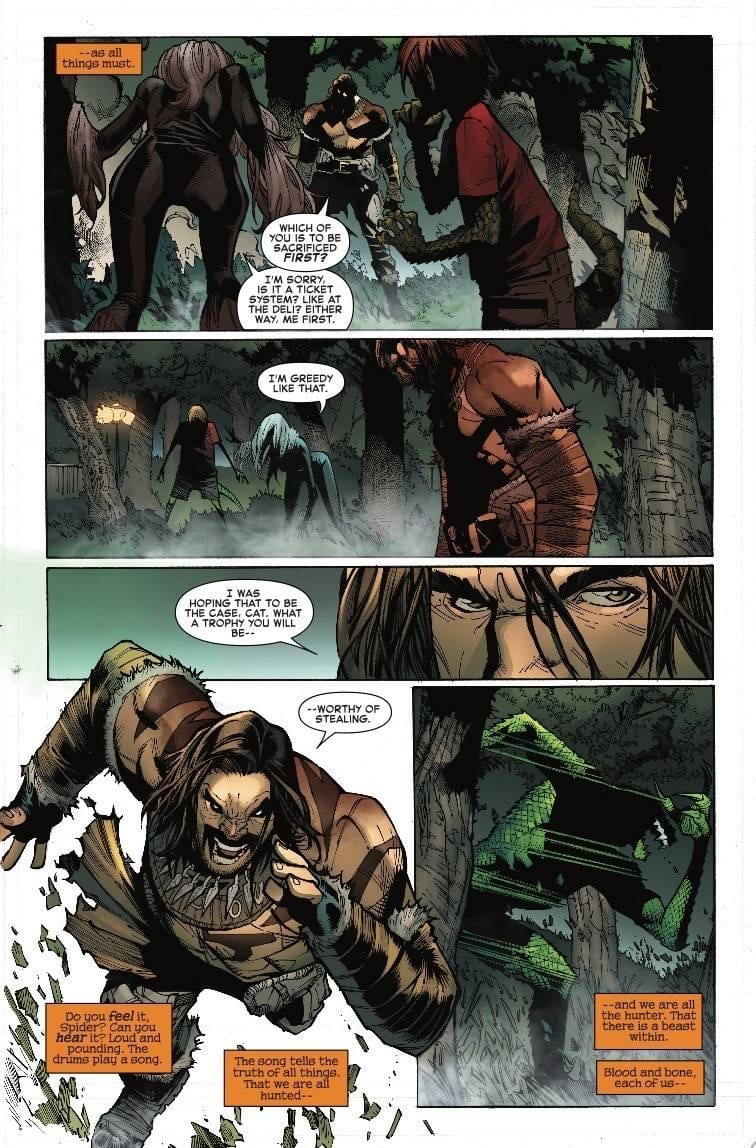 Humberto Ramos does another fantastic job penciling and inking this major finale. The animal-istic side of these characters and their actions are illustrated in such a way that exposes the primal point that Spencer was trying to convey. That final page is a total heart-breaker and leaves the right sour taste in your mouth for the final chapter of Kraven.

“THE HUNTED” did a lot of things right for both Spider-Man and his cast of villains and support. Vulture should come out of this in a very interesting place of prominence. Nick Spencer proved that he can juggle a ton of threads and keep pushing the world of Spider-Man forward into places that readers are going to want to go.

I’ve said it before and I’ll definitely say it again, Amazing Spider-Man is in very good hands.

"HUNTED" is a must-read for any Spider-Man fan. Nick Spencer is exactly who needs to be writing Spidey right now."HUNTED" Finale Proves AMAZING SPIDER-MAN's In Good Hands