HAWKMAN #22 Settles Into the Tropes to Prepare for More

Hawkman #22, written by Robert Venditti, with pencils by Fernando Pasarin, inks by Oclair Albert and Wade Von Grawbadger, colors by Jeromy Cox, and letters by Rob Leigh, puts our villain in a cage. You’ll never guess what happens next. The series takes a turn for the predictable, but that might not be a bad thing. And it’s looking like it might just be setting up the status quo for the next issue to challenge.

Venditti has been using a lot of tropes in this series so far. Most notably, Hawkman has been on a series of event quests, looking for a giant McGuffin at the end of a proverbial treasure map. But for a character like Carter Hall, this approach brings him back to his roots. The Indiana Jones-esque archeologist/adventurer gets the Indiana Jones treatment. While much of this issue leans into these tropes, with bad guys talking through cell bars and heroes being lured into traps, the conclusion to the issue sets up a shift in the series. With the next chapter shuffling Hawkwoman into the spotlight, we may be in for a very different series in the next few issues. And Venditti’s approach to this issue may merely be giving us a jumping-off point, to see just how far he’s going to take things. 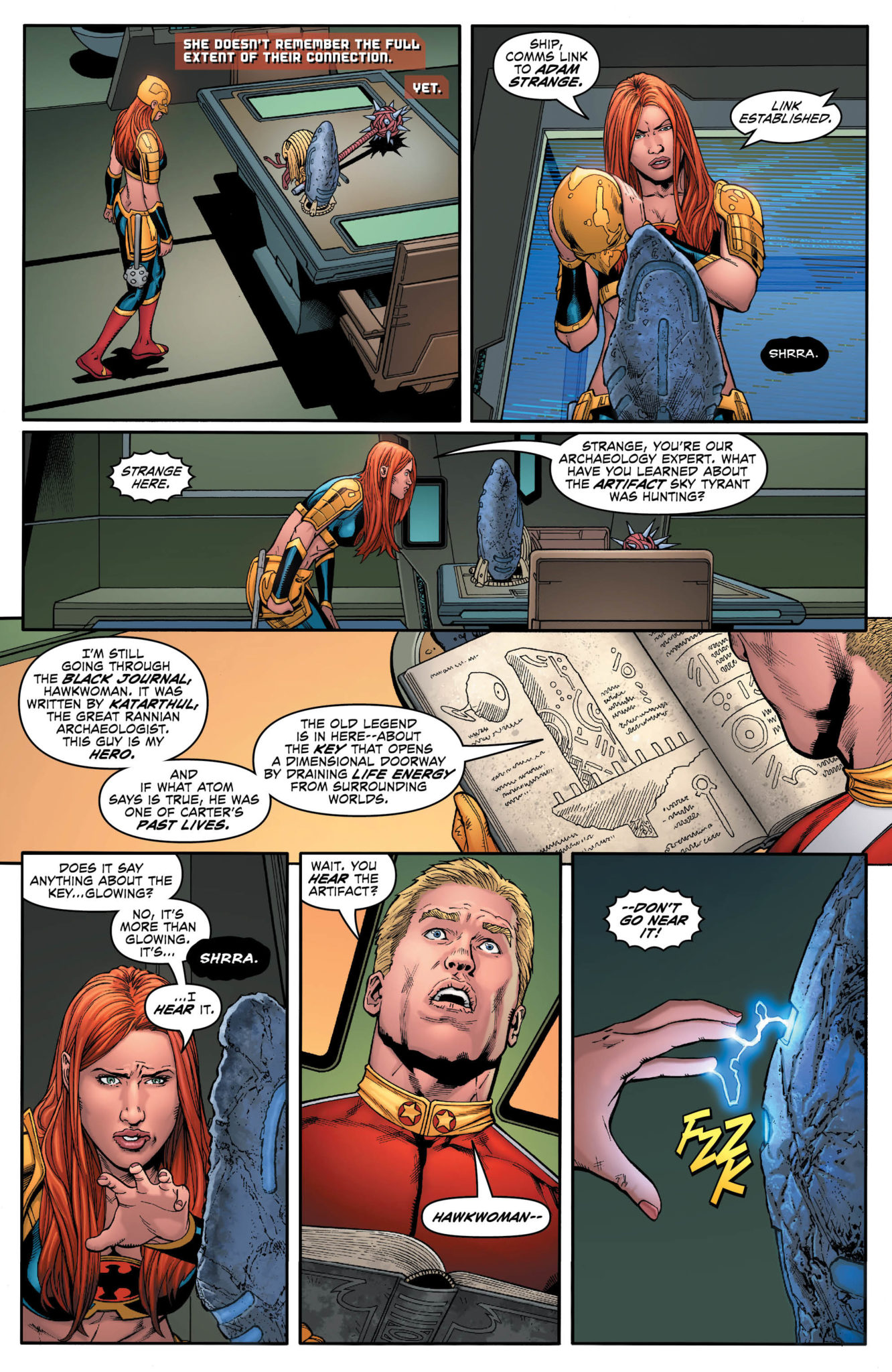 Pasarin, Albert, and Von Grawbadger establish the sinister tone to this issue in all the ways we’re familiar with. We see a “helpless” Sky Tyrant give a wicked grin as someone comes to help him. We see intermittent flashes of a character reading about the dangers of an artifact as another character reaches towards it. It’s the comfortable storytelling techniques that we’ve come to know and love. Yet Pasarin, Albert, and Von Grawbadger’s treatment of Hawkwoman is the defining factor of this issue. She is no damsel in distress, and the few times that she is incapacitated, we never get the feeling she’s truly helpless. It’s because of the “cliche” techniques that we see why Shiera stands out. She refuses to be set in a mold.

If you needed gloom and doom, look no further than Cox’s color scheme. The sheer normalcy of some of Hawkwoman and Sky Tyrant’s conversations is just chilling. It’s as though Cox is trying to convince us Sky Tyrant truly isn’t anything to worry about. Going just from the visual cues, it’s hard to argue the point. The colors make him seem weak and powerless. Yet when Sky Tyrant seems to get the upper hand, the clouds roll in. Everything is set in a reddish glow. His reign of terror begins fast and with a vengeance. 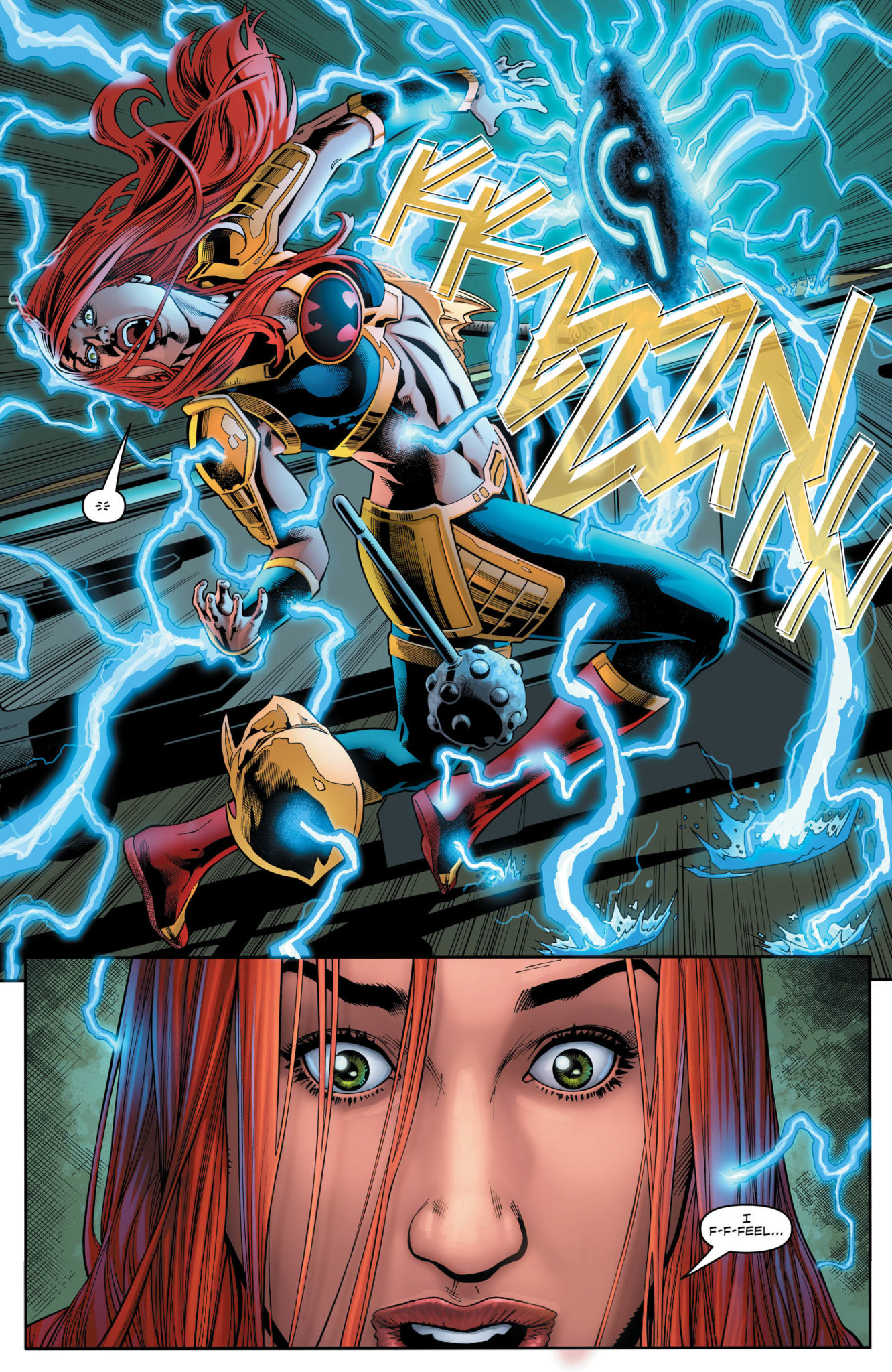 Leigh’s lettering is one of the things that consistently reminds us of who we are dealing with. While Sky Tyrant has Hawkman’s consciousness on lockdown, the readers still get to hear Carter’s attempts to regain control. While the lettering for Carter’s dialogue is clearly set in a lighter font, to show it happens only in Sky Tyrant/Hawkman’s head, Leigh positions the word balloons to all come from the same mouth. Though Hawkman’s consciousness is talking, his words lead to Sky Tyrant’s body. This continuously reminds us that it matters what happens to Sky Tyrant. If we lose him, we lose Carter too.

Hawkman#22 is clearly working towards something big in the weeks to come. While this issue is relatively simple, it provides a backdrop for the following issues to play against. We seem to be getting one last glimpse of cliche superhero dramas, before stepping into new worlds with Hawkwoman as our guide. Pick up Hawkman #22 on March 11th at a comic book shop near you!

HAWKMAN #22 Settles Into the Tropes to Prepare for MoreHawkman #22, written by Robert Venditti, with pencils by Fernando Pasarin, inks by Oclair Albert and Wade Von Grawbadger, colors by Jeromy Cox, and letters by Rob Leigh, puts our villain in a cage. You'll never guess what happens next. The series takes a...