HAWKMAN #20 and the Kingdom of the Crystal McGuffin

Hawkman #20, written by Robert Venditti, pencils by Fernando Pasarin, inks by Oclair Albert and Danny Miki, colors by Jeremy Cox and letters by Starkings and Comicraft, is a simple issue that somehow works. Much of this series shouldn’t work. Hawkman is chasing after one McGuffin after another. It reads more like a video game or and Indiana Jones movie than a comic. Yet somehow, this refreshingly simple series of quests knows what it’s doing. And what it’s doing is just plain, old-fashioned fun!

Venditti revels in Carter Hall’s archeological roots. Each issue, including this one, is essentially a treasure hunt. But now, with Sky Tyrant in control of Hawkman’s body, this gets a little more complex. Carter wants to find the treasure at the end of the clues, but he wants to wrest control back from Sky Tyrant first. The tug-of-war between wanting Carter to succeed, and wanting to see what happens if Sky Tyrant succeeds, adds a brilliant extra layer to this quest. 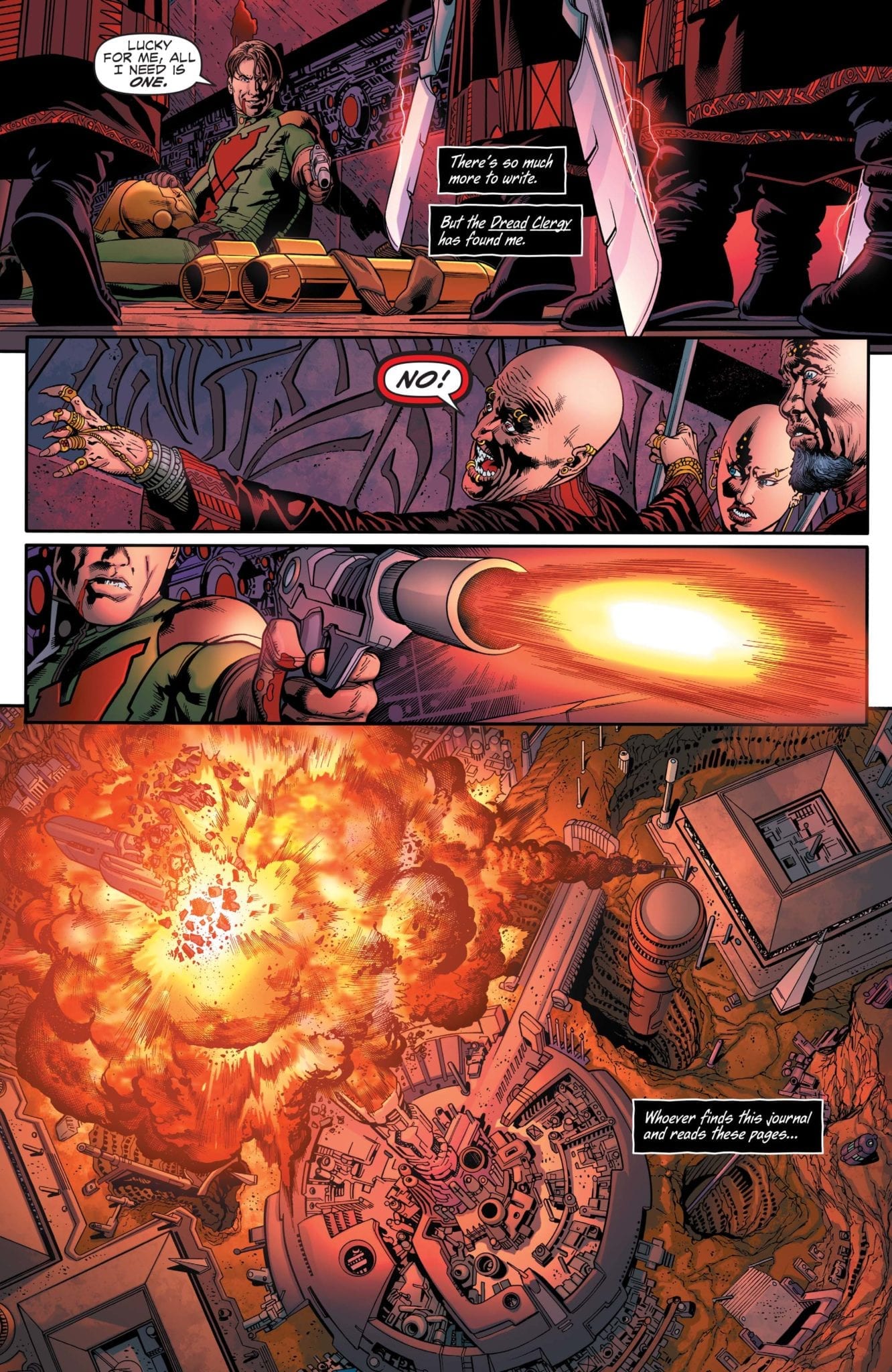 Pasarin, Albert, and Miki’s art is beautiful. Depicting everything from Carter’s showdown with demonic priests, to his internal struggle with the Tyrant, the art is continuously changing in all ways except quality. In an issue fueled by a battle with evil, Pasarin and co regularly cycle back to the snarling faces of that evil. Reminding us just who Carter is really up against.

Cox carries many of the tonal shifts. From the monkly showdown, which feels straight out of an Indiana Jones movie, to alien landscapes. It’s the hues and auras cast over the characters’ faces that give us a sense of how they fit in. And each shift helps us see what each world is like. The halls of the castle are dark and evil. The surface of the planet is full of wonder. 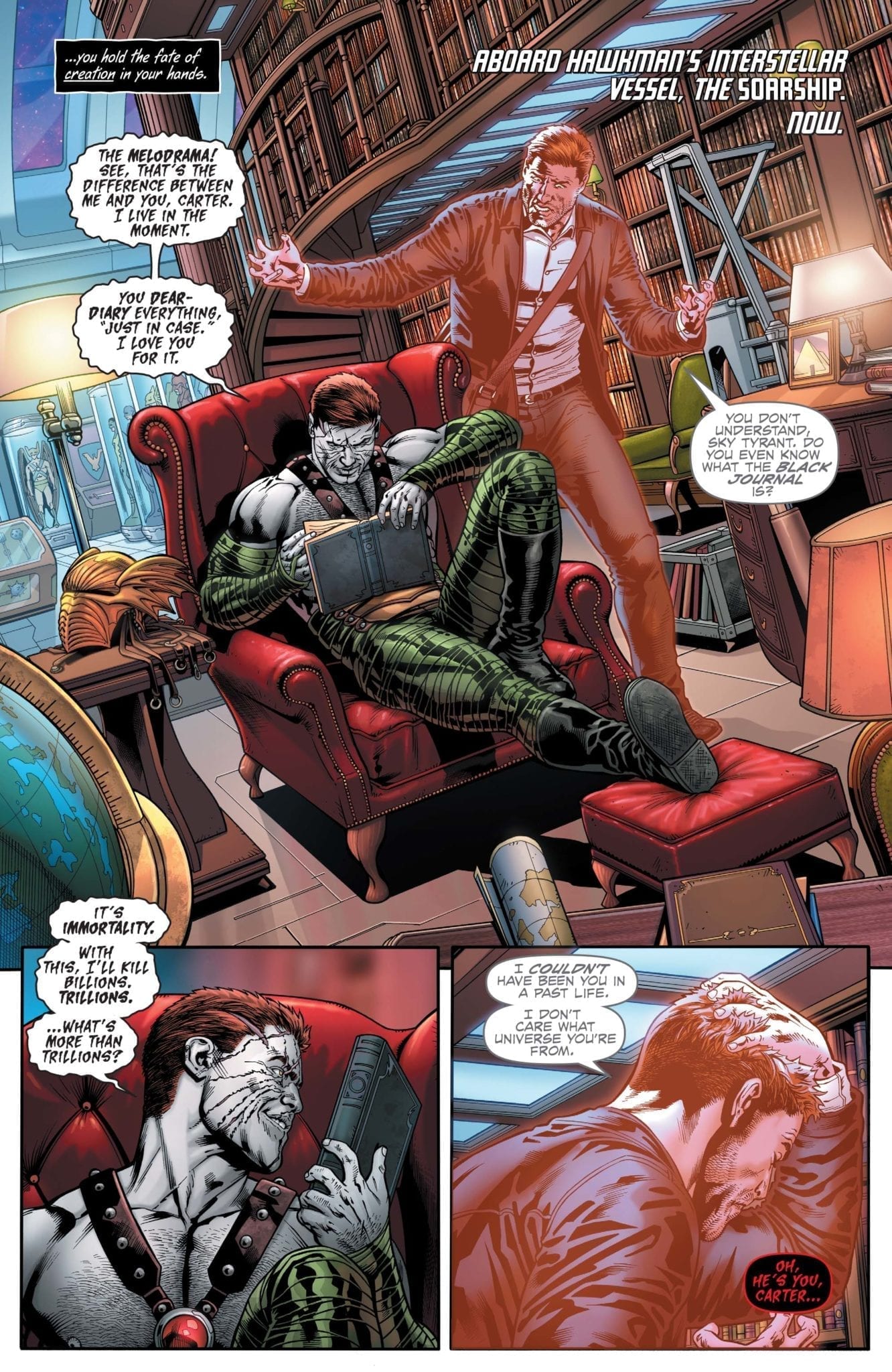 The letters by Starkings and Comicraft also work to set a unifying tone. The flashbacks and present-day moments, all marked with a futuristic font, remind us this is one man’s life, no matter the time period. Carter Hall has lived a long time. The many different fonts for each character helps us hear their voices. Carter’s is faint and unheard. Sky Tyrant’s is brutal and dirty.

Hawkman #20 probably shouldn’t work. It seems like the kind of plot that is so episodic; it would fit better in a video game. But the creative team pulls together to deliver a beautiful work. I only wish it was a video game because this is the kind of issue that makes me want to join this world.

Hawkman #20, written by Robert Venditti, pencils by Fernando Pasarin, inks by Oclair Albert and Danny Miki, colors by Jeremy Cox and letters by Starkings and Comicraft, is a simple issue that somehow works. Much of this series shouldn't work. Hawkman is chasing after...HAWKMAN #20 and the Kingdom of the Crystal McGuffin