Gotham City Monsters #6, written by Steve Orlando, with art by Amancay Nahuelpan, colors by Trish Mulvihill and letters by Tom Napolitano, is the end to a series with great potential. At times, this series promised to be something more than your average monster comic. It developed complicated stakes and suggested there would be reverberating consequences. But, as the series came to its conclusion, it settled for less. Spoilers will follow!

Orlando’s plot, despite the necessary monster fight of the last issue, was complex up until this point. The villain of the story, Lord Melmoth, claimed to be saving the Multiverse through his bloody actions. While he may have seemed like he was crazy, his mention of a blue voice in a previous issue, belonging to Dr. Manhattan, suggested he knew more than the other characters. The tension between his evil deeds and the greater good, was swept to the wayside for the finale.

The few moments that seemed to create any lasting influence from this series were quickly cut short. When Killer Croc seemed to betray the group, it was explained away as him pretending. When Melmoth is defeated and imprisoned, the Multiverse suddenly no longer seems to be in danger. So while much of Orlando’s plot in the previous issues suggested a complex ending, the ending was actually anything but. And perhaps Orlando should allow the reader to decide if it’s “A Fitting End,” rather than stating that on the final page. 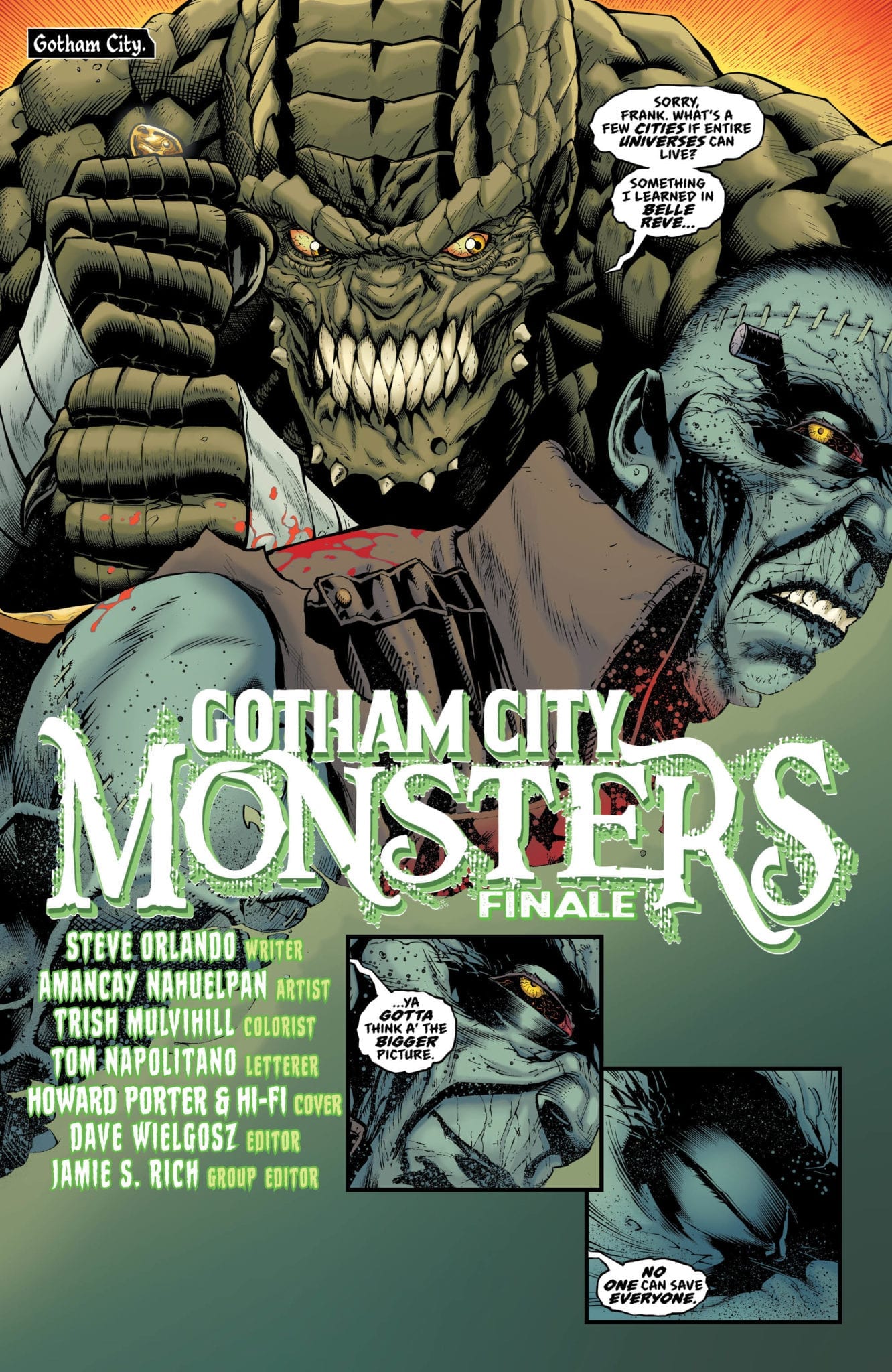 Nahuelpan’s art certainly counterbalances some of the struggles of the writing. With gory detail, Nahuelpan depicts monster fights. And though much of the comic is centered around bloody splash pages, Nahuelpan winds down the action beautifully. Instead of teeth flying through the air, we get characters set against a sunset in an empty graveyard. And as we return to Monstertown, each moment begins quietly in such a way that makes us feel like we have returned home. From silhouettes to wet mops, Nahuelpan focuses on the details in these final scenes. It brings us back to the basics and helps uncomplicate the ending.

Mulvihill’s coloring strikes an interesting balance. While some moments seem uneven, with bright reds looking out of place in the context, other moments are given great subtlety. The final moments of the comic are where Mulvihill truly finds her pace. The somber yet cozy atmosphere of Monstertown is given its weight through Mulvihill’s work. The sunsets and shadows create a kind of dark warmth that continues through the final pages. It’s like receiving a nice send-off as the series comes to a close. 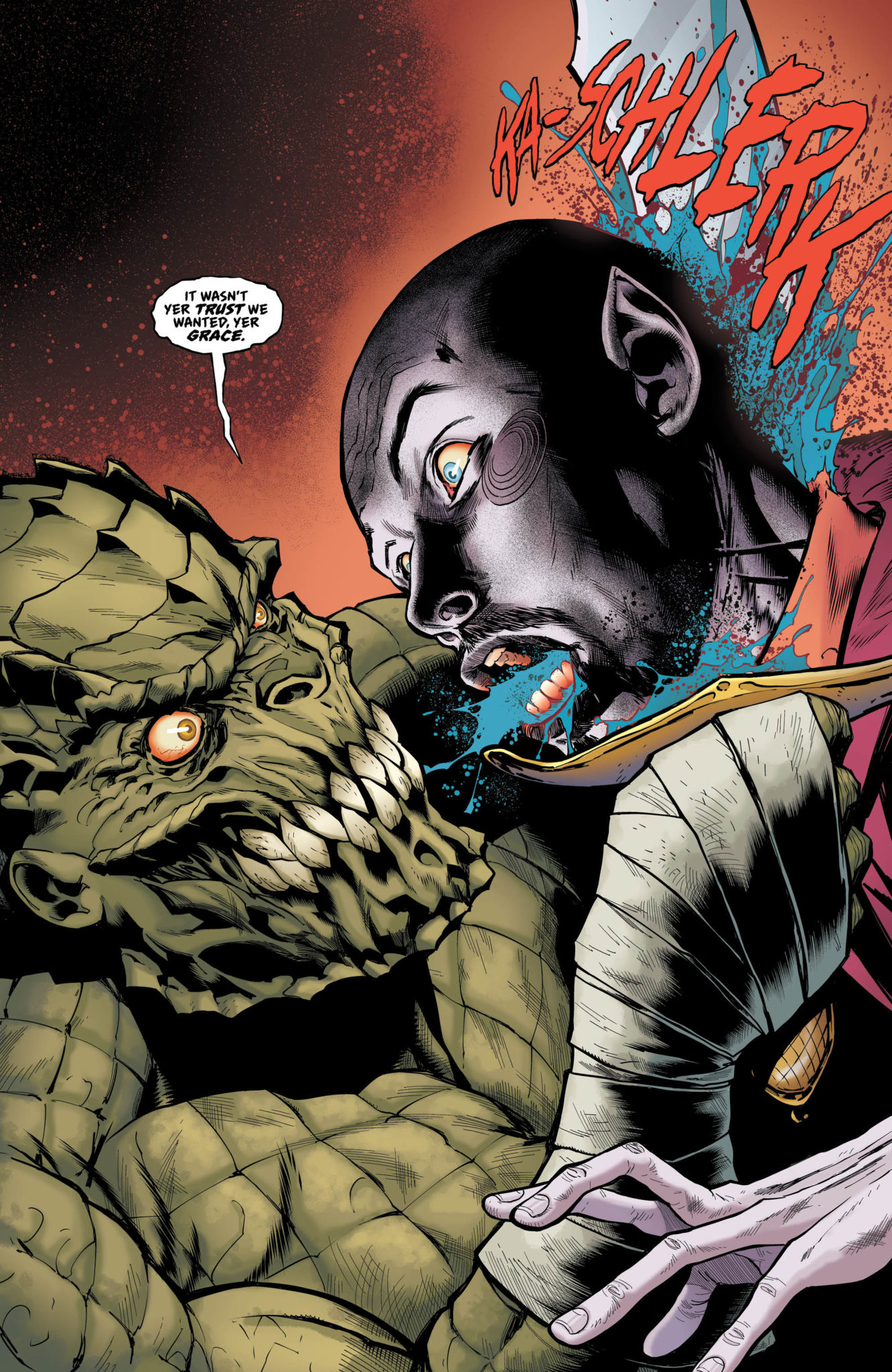 Napolitano goes all-out with this final issue. It seems like every word balloon or sound effect is written in a completely new way. Each sound is given a different treatment and therefore sounds different in the reader’s mind. Though at times, the results are a little distracting, finding it hard to keep track of what each font means in terms of sound, it still creates a brilliant visual soundscape. And regardless of effect, the lettering does a lot to make the comic feel fun.

Ultimately, this series had more potential than it cashed in on. The complexity of the stakes and the promise of lasting implications were abandoned. It certainly makes for an entertaining read. The only problem is, it seemed like it had the power to be more than just entertaining. Pick up your copy of Gotham City Monsters #6, February 12th, at a comic book shop near you!

GOTHAM CITY MONSTERS #6 Settles for the Status QuoGotham City Monsters #6, written by Steve Orlando, with art by Amancay Nahuelpan, colors by Trish Mulvihill and letters by Tom Napolitano, is the end to a series with great potential. At times, this series promised to be something more than your average monster comic....