The Final Battle of the Freedom Fighters has begun!

The Freedom Fighters are making their final push against the Third Reich. Over the past year, they have been prepping for an assault on the Nazi’s base within the Cheyenne Mountain. It all started from the moment they destroyed a Nazi book depository to spark the fire of freedom to try and bring back Uncle Sam. When he returned, Hitler II brought back the Cyborg Overman to face them. Throughout their battles, they’ve freed cities, lost allies, and gained new powers. All of it has been building to this final push. Will the Freedom Fighters win and return America to its former glory? 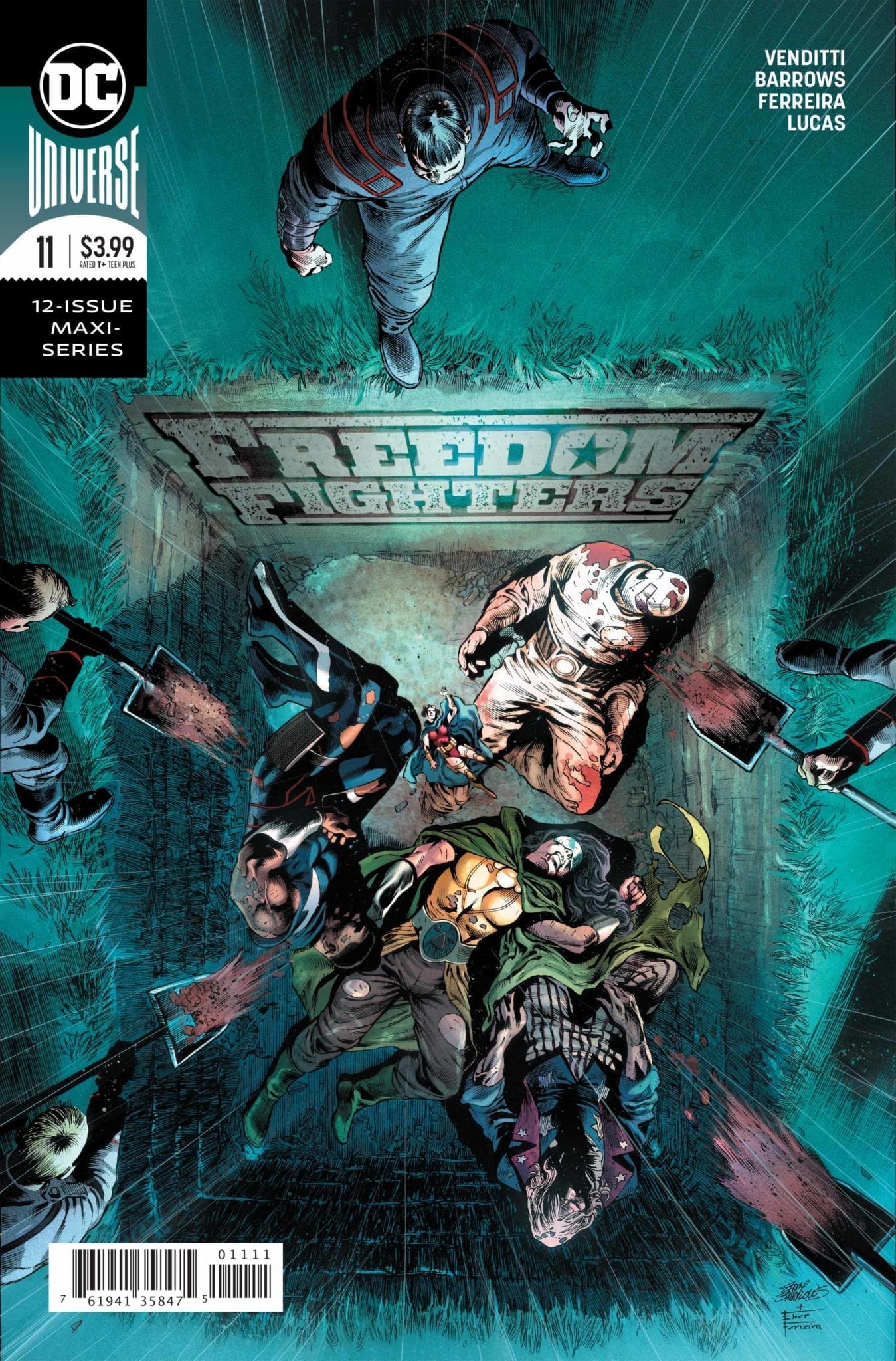 The team continues their assault on the mountain headquarters of the Reich while a fellow rebel takes to the radio to send out a broadcast to everyone. Before the Freedom Fighters get too far, Cyborg Overman returns for a fight. Uncle Sam stands up to the cyborg menace and orders the rest to head inside and find the two captured members of the team.

Once they make it inside, they are soon stopped by the Plasstic Men, who threaten to tear them all apart. Refusing to allow them to attack her friends, Phantom Lady uses her power to cause them to stretch out to their limit and their deaths. Meanwhile, Adolf Hitler III prepares to finish off the team with a nuclear device beneath the mountain. 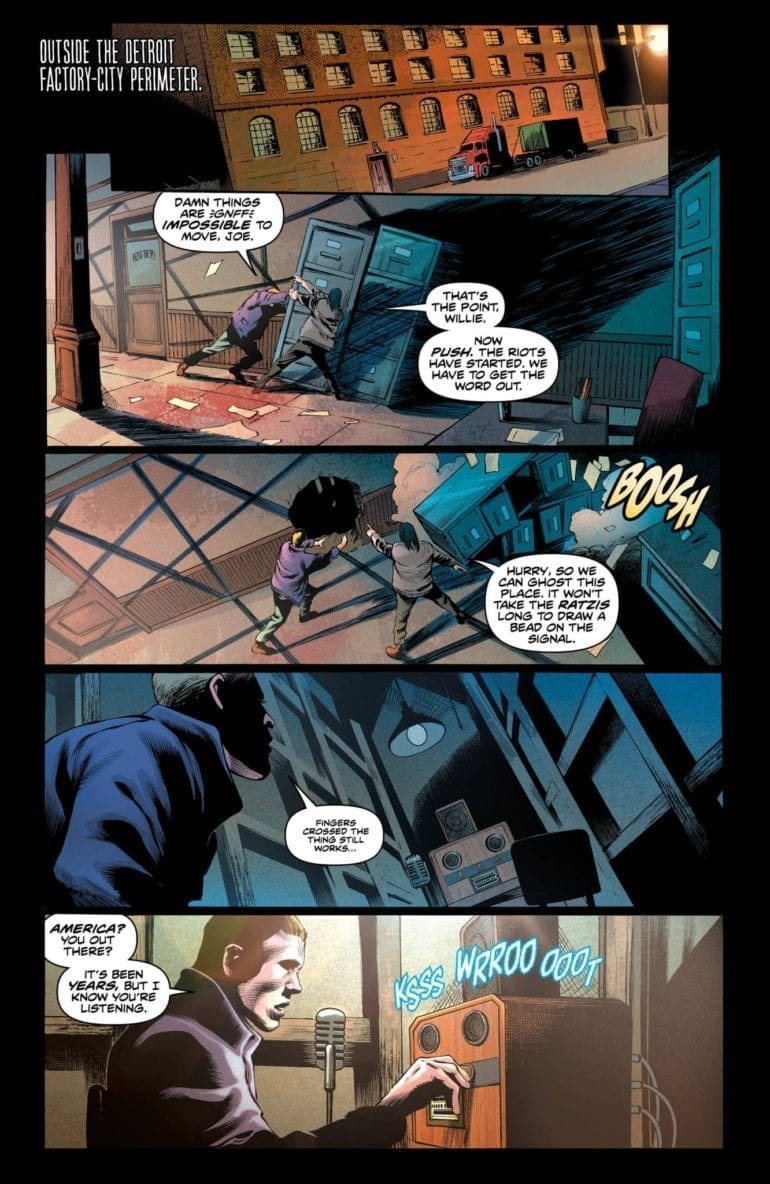 This issue might turn some people off due to it being around 95% of it being an action sequence. I am not one of those people. This is the culmination of nearly a year of this storytelling, and it is full of so many memorable moments. From the first page, readers will feel the weight of the Freedom Fighter’s fight as we pan to see Americans that we’ve seen through the maxi-series tuning in to the broadcast. It gives a sense of finality as the rest of the Fighters fight on to take on the Nazis.

The only real downside is the brutal and sudden deaths of the Plasstic Men. They were shown to be some of the most brutal enemies the Freedom Fighters faced. However, they were killed with a single portal from Phantom Lady like they were nothing but ordinary foot soldiers. This also raises questions on why Phantom Lady waited so long to do this, how did the portal stretch them to death, and why does she feel like she’s a monster for it? We won’t get any of these answers with one issue left, but that is more of a nitpick than a problem. 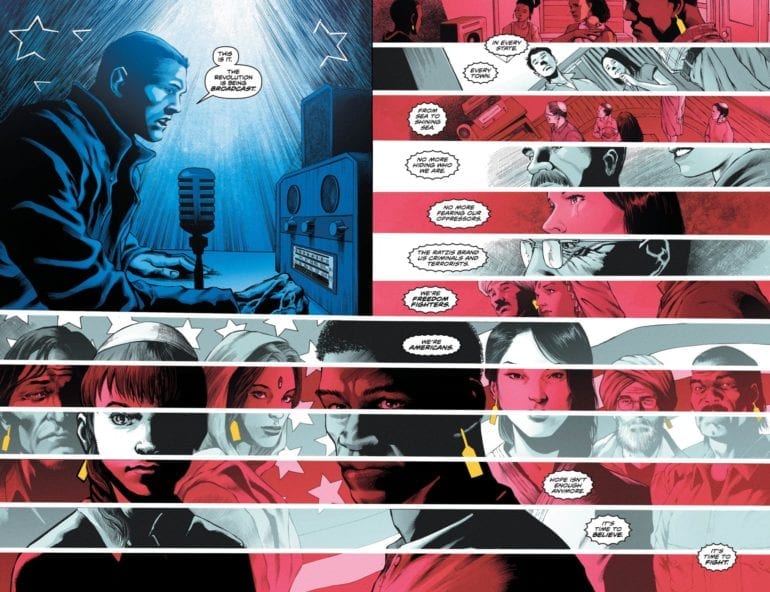 This is probably the best the series has looked on its entire run. Eddy Barrows brings his A-game with his masterful designs best shown during the action sequences. Uncle Sam fighting Overman is one of if not one of the best looking fight sequences this year. It only gets better when Adriano Lucas’ colorwork comes into play. Throughout the series, we had darker colors to match the darker tone of the world. But with the Freedom Fighters turning the tide, vibrant reds, whites, and blues cover the battlefield, and it’s simply breathtaking. There’s not much left to say other than it’s just flat out gorgeous. 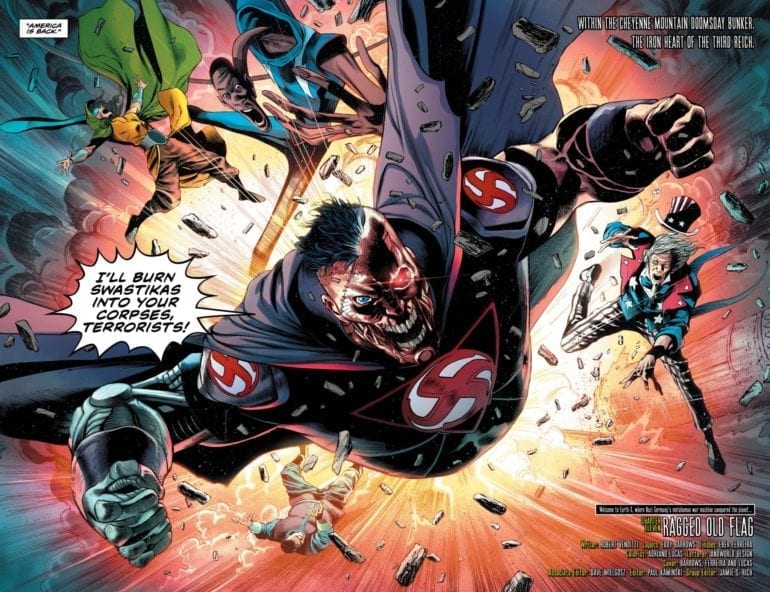 The penultimate issue of the Freedom Fighters will undoubtedly be one to remember. Fantastic art, incredible action, and a story where you feel the weight of the stakes at hand. What started as a group of C-List superheroes have evolved into one of the best comics on the shelves. Go out now and pick up your issue today. I highly recommend it.

Freedom Fighters' Penultimate issue is an action-packed feast for the eyes.Review: The Final Battle Begins in FREEDOM FIGHTERS #11