Frank Miller: The Transition From Comics To Illustrated Novels

Frank Miller. Most people likely know the name for his work on Batman, for better or worse. Well, critics won’t have to cringe much longer, because he’ll soon be going from comics to the illustrated novel, Cursed. Many critics, including Monkeys Fighting Robots, point out that while Miller’s storytelling is still pretty good, his messages can be confusing. However, they also highlight Miller’s strengths while expressing his desires. All of which culminate in his illustrated novel career.

Miller’s work is best described as “pulpy” sensational tales calling back to the days of old. From the likes of Doc Samson to The Shadow, these stories inspire what would become superheroes. Miller himself found Superman and Batman during the Silver Age in both the comics and the Superman Fleischer cartoons. His earliest work in comics demonstrates a contrast with the swashbuckling Silver Age against pulp elements. Perhaps the most significant contribution to his pulpy style is in Batman: The Dark Knight Returns.

The Dark Knight Returns isn’t a dark tale about Batman needing to fix the world; according to YouTuber Matt Draper, it’s about Batman emerging as a legend. The series demonstrates how the Dark Knight’s pulpy beginnings revitalize him. Just wearing the costume makes Bruce feel alive after years of retirement. More importantly, it changes how the world looks at comics. No longer just a means of entertainment, but a method of looking at their own world. Strangely, the events of the 80s are still relevant. At his best, Frank Miller demonstrates how the contrast between any subjects, highlights their importance. 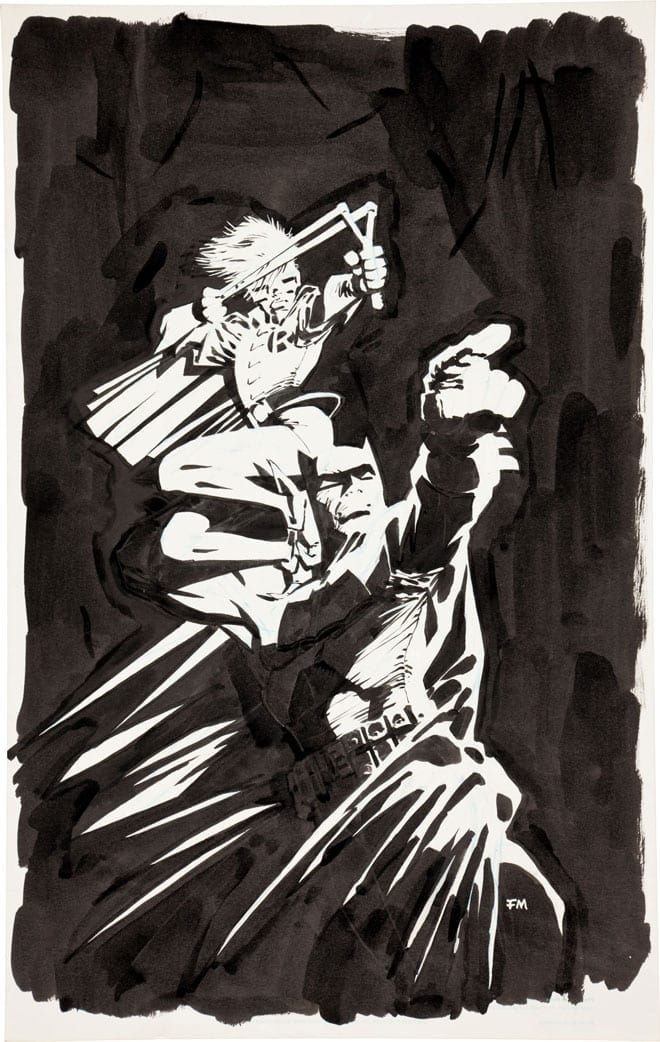 The Art of Miller

Miller’s style is all about contrast, especially on where characters fit into a bigger world. While most of Millar’s illustrations look rough and sketchy, it’s a style that highlights where characters stand in-story. Whether it’s how someone looks against the background or their posture’s communication, the heightened contrast demonstrates their place and motivations. The Dark Knight Returns features numerous panels that highlight the action taking place. The multiple captions and dialog that go along these figures also demonstrate a dynamic. While the world in the panels shows one piece, the captions reveal a hidden interior.

Unfortunately, when the focus becomes one-sided, as is the case in The Dark Knight Strikes Again, any meaning becomes devoid. Because of how 9/11 traumatized him, Miller changed what would have been a fun romp into a rage fest. From letting Metropolis be destroyed by Brainiac to Batman brutally killing Dick Grayson after Grayson was driven insane, it’s nothing but Miller taking his frustrations out on others.

Some of those frustrations also come in All-Star Batman and Robin, which further alienated people from Miller’s work. Some critics even strike out against Frank Miller for some of his less controversial pieces. 300, for example, was called out for its less ‘woke’ depiction of people with deformities (though that has more to do with Zack Snyder’s movie adaptation). Similarly, The Dark Knight III is given a notably cold reception by critics like Newsarama’s David Pepose. Miller barely even has any sway in the series other than generating the idea. Brian Azzarello and Andy Kubert actually do most of the work. Miller on his own, however, doesn’t get an easy time despite admitting guilt for his past actions with “I wasn’t thinking clearly.”

Frank Miller takes the time to think and act more clearly in Superman Year One. Unfortunately, a number of people who looked up to him now feel nothing but shame. A few critics like Adi Tantimedh of Bleeding Cool seem to assume the worst and nitpick this series. People like Pepose, meanwhile, like it mainly for nostalgia. But living solely for past glory is not the best thing to do. Some fans, including Pepose, are growing tired of the dialogue-heavy content of Miller. Miller likely recognized this and decides to do a farewell story with The Dark Knight Returns: The Golden Child.

The Golden Child is Frank Miller entrusting his legacy to the younger generation. That is perhaps best represented through Jon Kent. Despite being a toddler, he’s wise beyond his years, a “floating little Buddha” by Miller’s description. Jon’s potential mirrors the hope Miller has for creators who can propel comics to new heights in ways he no longer can. While comics have outgrown Miller, he finds a medium that seems like a perfect fit.

Miller’s new story Cursed with writer Tom Wheeler uses Miller’s contrasting art style to help tell the story. Unlike comics, which put more focus on the artwork, illustrated novels like this focus more on the writing. The captions that fans like to criticize Miller for suit more definite meanings unlike visuals that are more subliminal. Yes while Wheeler does the writing in this work, it evokes Miller’s style. Every thought, every little detail as plain as day. Miller’s artwork evokes the same message, acting in parallel so that the reader can choose the written word or image. It’s like reading Sin City in a simpler form. If the Netflix series this novel is advertising works out, Miller might get a better audience. No one will ever forget the legend of Frank Miller, and maybe that legend can be revitalized.

What do you all think? Is Frank Miller just grasping at straws? Or do illustrated novels do him better justice? Leave your thoughts in the comments.