Review: DOOMSDAY CLOCK #11 Sets Up the Finale in a Big Way

Doomsday comes closer with one last set up!

It’s been another long while since the last issue of Doomsday Clock where we left on a big reveal. The entire issue followed Doctor Manhattan’s journey to the DC Comics Earth. Using an actor as a tether, the blue god-like metahuman observed the timeline and experimented with it. This all came about when Manhattan saw Superman for the first time and sensed the world’s timeline was connected to him.

His first attempt to remove the Man of Steel ended up delaying Clark’s eventual arrival and his connection to the Justice Society. The second attempt messed with the Legion of Superheroes. The final push had Doctor Manhattan remove the past and future to create the New 52 timeline. After Wally returned in Rebirth #1, Manhattan realized that this was going to lead to the confrontation between him and Superman. Will this battle end the world or just the Blue Metahuman? 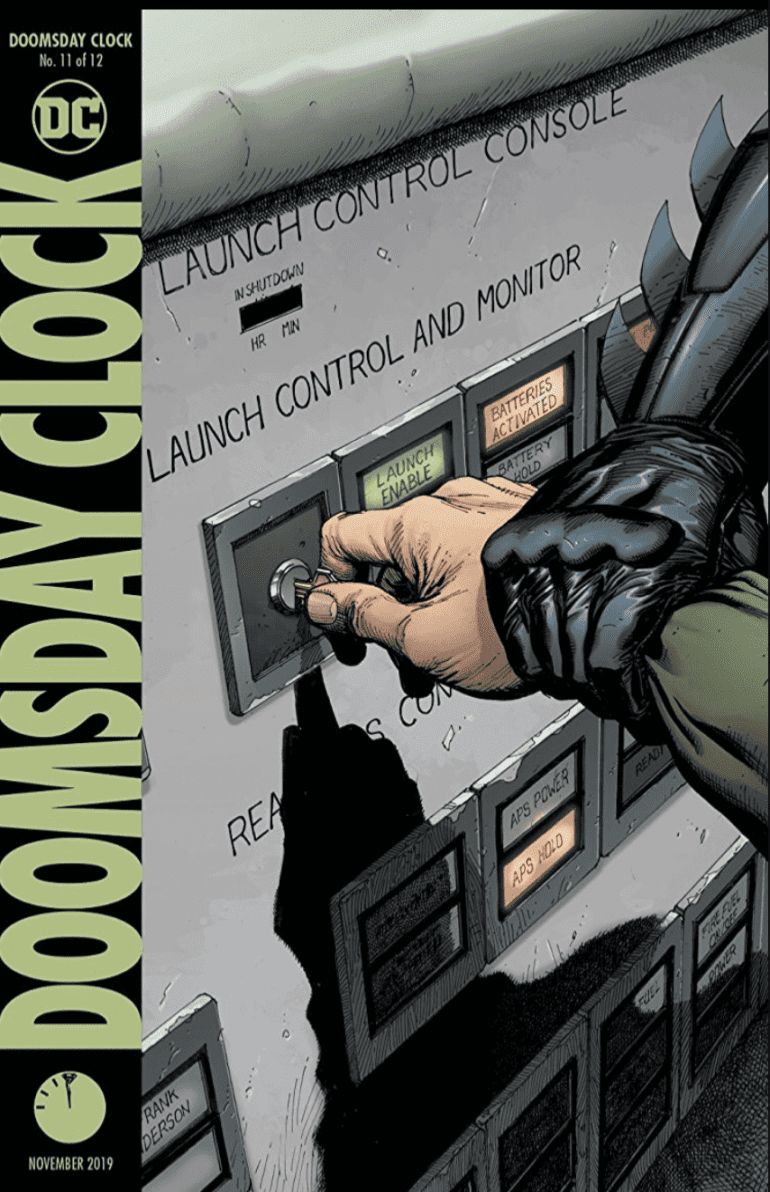 After Doctor Manhattan defeated the heroes on Marse, he comes to Earth to see it go to hell. From the gang war started by Mime and Marionette against the Joker to the Anti-Superman riots in Washington D.C., the world has become more like the Watchmen’s World more than ever.  Ozymandias, correctly guessing this would happen, watches on from a bunker, explaining to Saturn Girl how this was all a part of a master plan to save both worlds.

Meanwhile, our trinity has been hard at work to stop doomsday from happening. Batman rushes to stop nuclear launches all over DC, asking Alfred to find the new Rorschach to help. Wonder Woman continues her fight against Black Adam’s forces at the United Nations, while the Amazons plan to go to the mainland to get her. Finally, while Superman plans to join Diana, Lex Luthor shows a certain time anomaly that has been appearing throughout the DC timeline. It turns out whenever Manhattan alters time; he leaves behind a copy of his photo, proof that he had done it. 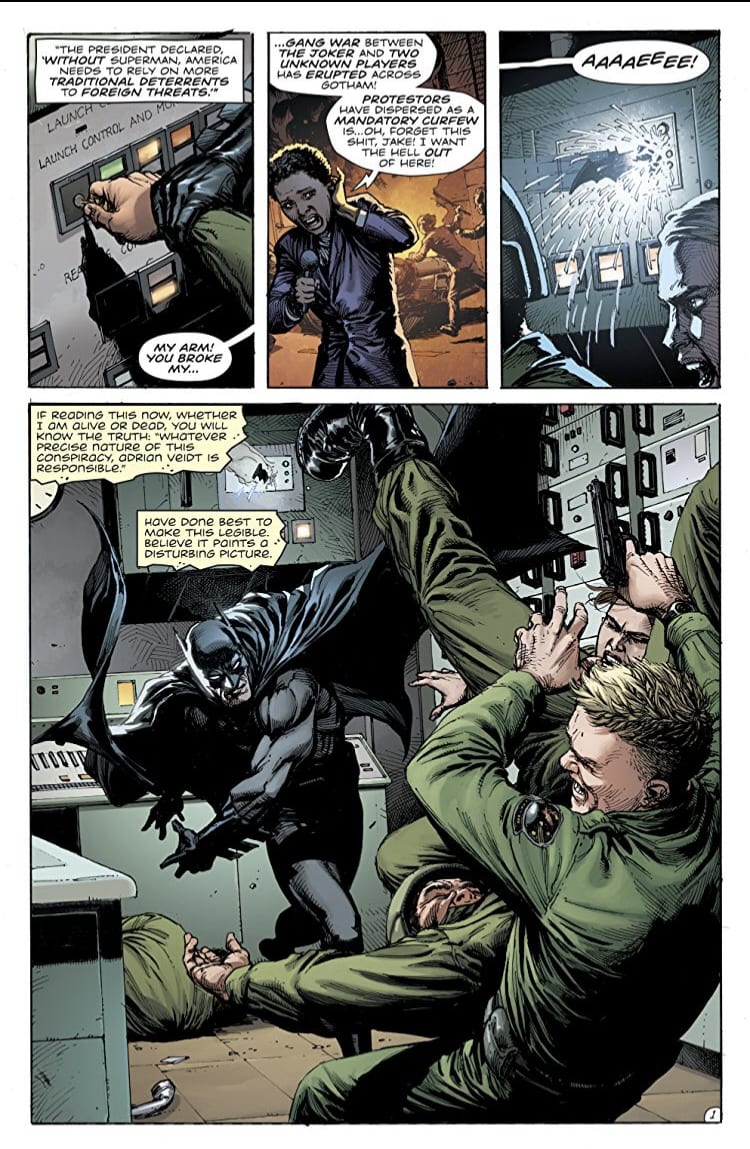 It’s hard to admit it, but this is definitely the weakest of the issues. After coming off an entire issue where we get a ton of exposition on how Manhattan has edited the DC Timeline, and now a good chunk of this one is an exposition on how Lex knows. Other characters that started in the series have been completely tossed aside with dropped plot points. Mime and Marionette with the Comedian? Pointless. New Rorschach? Given up hope. Even Saturn Girl and Johnny Lightning have been pushed off to the side.

That being said, there are still plenty of positives in this book. The conflicts of the Trinity kept me on the edge of my seat. Diana’s battle against Black Adam’s forces while seeing Batman fighting to stop nukes from going off actually had me question how doomsday could be prevented. Even Lex Luthor’s story, despite it being Manhattan’s story from another angle, is incredibly interesting. To top it all off, we have the ultimate Cliffhanger to lead us into the final issue. This reviewer isn’t sure when that next one will come, but it definitely has the potential of being a powerful finale. 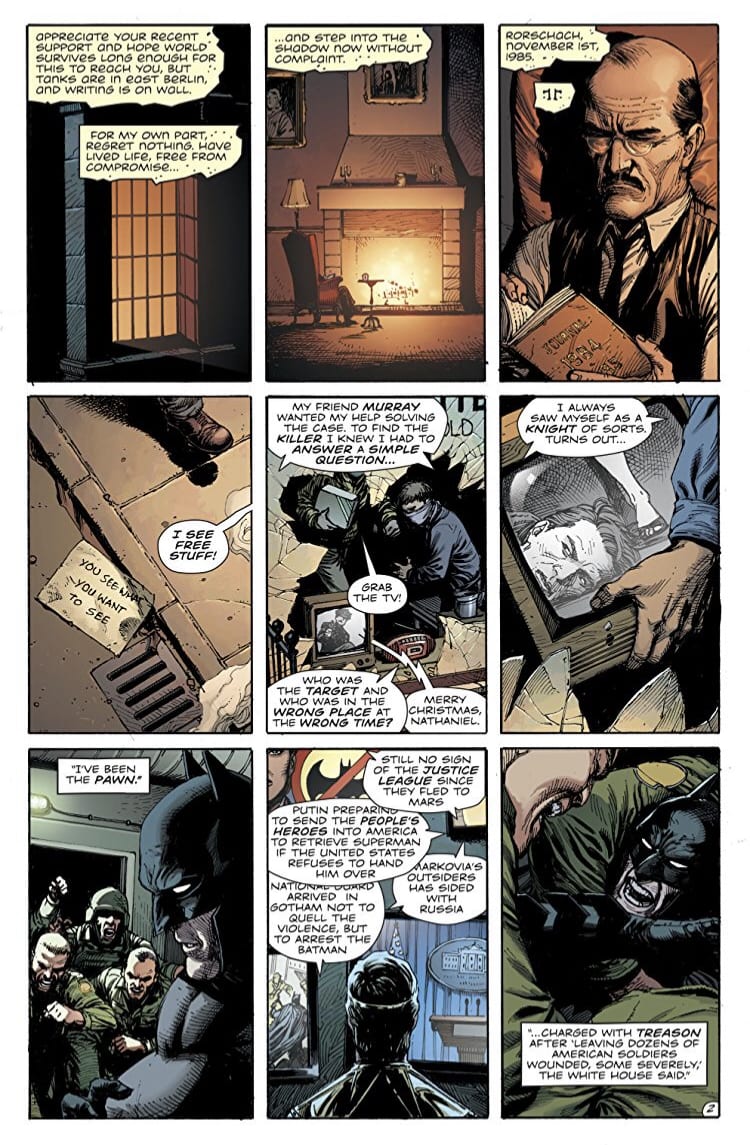 It isn’t clear if Gary Frank’s art is the cause of the delays, but it certainly forgives them. Every panel is a masterpiece, and with Brad Anderson’s colorwork, it brings the book to life.  It’s hard to praise something you’ve enjoyed with every passing issue. The best part, however, has to be the little nods to past DC comics sprinkled in, including the Planet Krypton restaurant from Kingdom Come. If the story hasn’t captured the readers, the art of Doomsday Clock will.

As we come to the penultimate issue of the series, it still continues to amaze this reviewer how captivating it is, despite delays. While there are definitely parts that feel rather pointless, a good portion of the issue will have readers on the edge of their seats. The art helps the issue with its incredible detail in line and colorwork, detailing the final battles to come. Add a nailbiting cliffhanger, and the finale promises to be an epic as the Doomsday Clock clicks to midnight.

The penultimate issue of Doomsday Clock has plenty of beautiful action and exposition, for better or for worse.Review: DOOMSDAY CLOCK #11 Sets Up the Finale in a Big Way