As the Doomsday Clock ticks towards midnight, the superheroes of Earth go after Doctor Manhattan. With the Justice League taking point, the superheroes barely stand a chance against the omniscient doctor. The reason why is due to the Trinity being out of commission. While Wonder Woman works to defuse the Russian/Firestorm situation at the United Nations, Superman is recovering with Batman. While the other costumed vigilantes from the Watchmen universe are in the wind, Manhattan watches the world. The real question, however, is why he watches the world? 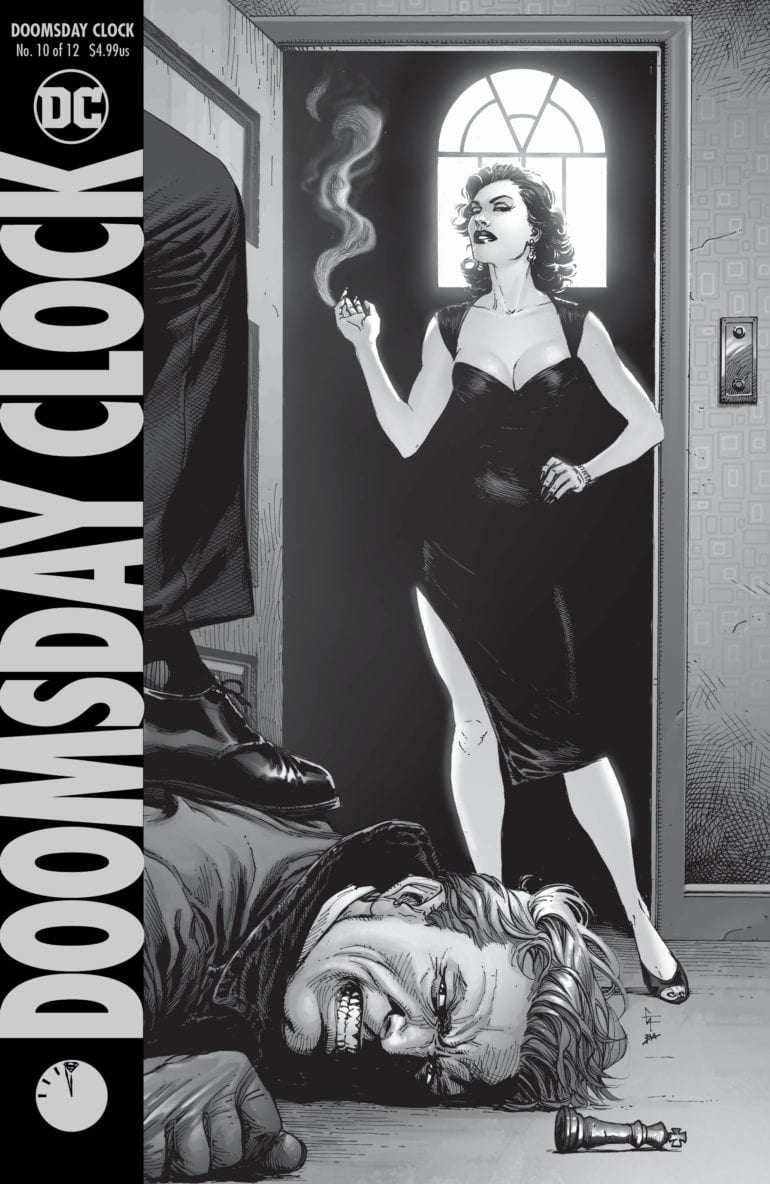 Doctor Manhattan explains what he has been up to since the end of Watchmen. After leaving his universe, Manhattan teleports himself to the prime earth of the DC universe in April of 1938. He befriends an actor named Carter Colman, who he uses to readjust his powers of future seeing. As Manhattan gets it settled, however, he hears of a man who stopped a car and lifted it over his head. The omniscient doctor teleports to the location and sees Superman for the first time. He begins to observe the Man of Steel’s timeline in hopes understand him better. After realizing Superman is the very heart of costumed superheroes, Manhattan decides to start experimenting with it.

This is the explanation readers have been waiting for, and it does not disappoint. With Doctor Manhattan narrating, we see a history of the DC universe and Superman’s role in it. It takes into account every detail about how Superman affects the timeline. From the Justice Society to the Legion of Superheroes, this issue makes readers feel the weight Superman has on the timeline. It’s also cool to see how the timeline shifted after each crisis. Even the framing device of Carver Colman, an actor we’ve seen in the background, is an exciting part of the book. What was originally a background a character grew into a deep story within itself. The only complaint I can think of is a lack of progression in the present. The ending in the present was the same as last issue, but with a final panel that will no doubt get readers excited for the next issue. If you’ve been reading up to this point, this issue will not disappoint.

Gary Frank and Brad Anderson continue to show why they’re the best art team for Doomsday Clock. They can make each panel feel grounded, as seen in the Carver story, but also fantastical when with Manhattan. I’ve praised this team in the previous nine issues, and I don’t think this will stop any time soon.

This comic was well worth the wait. Doomsday Clock continues to be the mind-blowing, reality-shaking story it was announced as. The art matches the weight and epicness of the story at every turn. I highly recommend this issue as well as the series up to this point.