Each week here on Monkeys Fighting Robots, we are looking at every DC Rebirth title and tracking its progress. Books will be rated on a scale of “Buy It”, “Borrow It” or “Bin It”.

Batman #1 (Tom King, David Finch and Matt Banning)
The Caped Crusader’s new run begins in earnest as he attempts to play Superman and prevent a plane from crashing into Gotham City. With the establishing shots, one can’t help but feel there is a whiff of Year One symbolism emerging from the panels. King not so subtlety references the Dark Knight Returns and the now infamous “this would be a good death” series of monologues. This is quite the interesting move for a series that is prima facie attempting to address, both thematically and literally, the darkness that crept into the DCU post-DKR/Watchmen. Unlike the original work, however, these speech is less an act of defiance and more an acceptance of his own mortality. This is a compelling piece of introspection in how Bruce Wayne, a man who has walked between plains of existence, has come to understand death, as if it were an old friend.  This is a series that understands it’s own legacy and is using that to propel itself into a new era. With new heroes intent on replacing him, Bruce Wayne may yet have to come face to face with his own history and impact on Gotham City.

Superman #1 (Peter J. Tomasi, Patrick Gleason and Mick Gray)
Ostensibly, this is a book about the Man of Steel, but not so. This is a book about a frightened little boy as he tries to deal with power beyond his imagination. Jonathan; the son of Clark Kent and Lois Lane, isn’t happy. His family secret has been thrust upon him at a young age, forcing him to live an relatively isolated life and to lie to anyone he meets. This in and of itself would be enough to torment the young lad, but the added pressure of his uncontrollable powers adds a new layer of pressure as Johnathan quickly discovers their potentially deadly consequences. The child’s perspective means that some of the reality of the act events are somewhat skewed, giving it a Twilight Zone-esque feel from time to time. It’s an interesting way to take the core Superman book, but it may alienate certain readers and was perhaps a story-line best saved for the Super Sons title launching later this year. It’s frustrating that once again Lois Lane is given very little to do. The series is not lacking in potential, but it’s unclear if there is enough of a draw for this story-line to take flight. Green Lanterns #1 (Sam Humphries, Robson Rocha and Joe Prado)
I’ll admit it, I’ve never been a Green Lantern person. I appreciate that Geoff Johns had a long-run on the character that revolutionised the series’ mythos and is widely regarded as an excellent series, but it’s just not for me. I tried to engage back when Blackest Night came about, but I decided that my time was better spent elsewhere. Green Lanterns hasn’t done much to change that opinion. It’s set-up as a buddy cop comedy-drama akin to Lethal Weapon, but it’s pretty . It’s lore heavy, but not in the way that you want to learn more about it. It acts more like a barrier to engagement, than an invitation to their world. Jessica Cruz is an interesting character, a woman who recently overcame her chronic agoraphobia becoming a Green Lantern in the process. Her partner, Simon Baz is less interesting here, though I do understand that race and religion played a big part of his character arc, reflecting the US’ Islamophobia post-9/11. If we see more of those elements shining through, then maybe this series may bounce back, but as is stands it’s a lot of space, but very little opera. 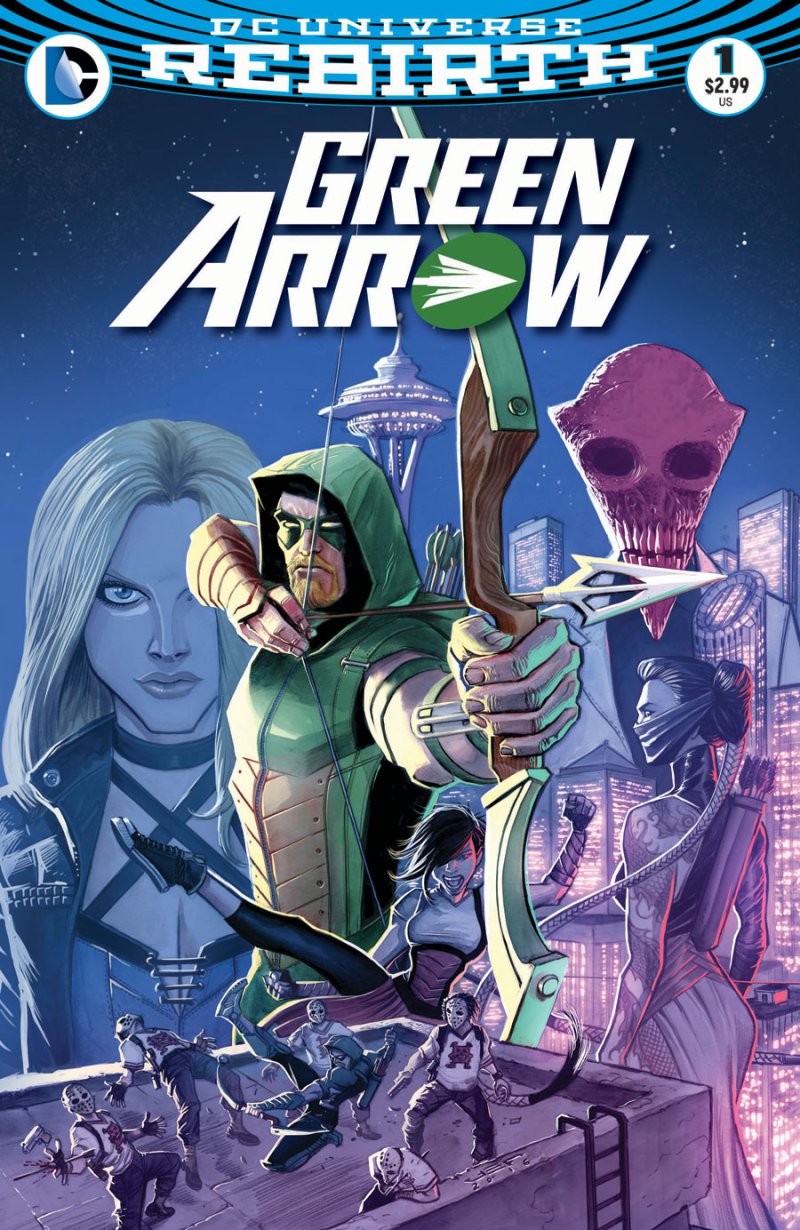 Green Arrow #1 (Benjamin Percy, Otto Schmidt and Juan Ferreyra)
Okay, how many times can we do the “people think Green Arrow is a hypocrite from being a socialist despite coming from a background of privilege” story-line? I don’t know, but perhaps in the current age of activism and hyper-aware politicos, this was a book that was needed. Indeed, Oliver Queen is more relevant to the modern young person than he has been in years. Something is rotten in the state of Queen Industries as evidence suggests the higher ups that actually run the company may be involved in an underground trafficking ring. There is nothing new here, but it gets a lot of the basics right. It feels like those brilliant episodes of Justice League Unlimited that starred Green Arrow. The development of Oliver Queen’s relationship with the Black Canary helps in someway make up for the loss of Dinah’s brilliant solo book, but it gets less attention than it deserves in this issue. The character is the trust version of himself in this series, but a paint by numbers story-line holds it back from being truly brilliant. Titans: Rebirth (Dan Abnett, Brett Booth and Norm Rapmund)
Out of all the books being launched as part of DC Rebirth, this was the book I was most excited for. Not only did its creative team have an amazing body of work, but it was to feature the return of the original Titans; one of my favourite teams. This issue does what Titans comics do best, focusing on the relationships between the Titans as they each re-awaken to their past with Wally West; the former Kid Flash. It is done very well, giving a whistle-stop tour of the team’s history and their dynamics. Nothing major is revealed about the mysterious manipulator behind the curtain, but this series would appear to be the linchpin of the Watchmen meta-narrative. It’s required reading if you want to follow the grand plan. It also gives us our first real glimpse at Nightwing’s new/old suit which is a nice bonus. Rapmund still draws some of the best superheroes stuff on the shelves. The Titans are the centre of the DC Rebirth. Has DC has been reading my Christmas list?

This week was a much better showcase of the potential of the DC Rebirth than the previous outing. The underlying meta-narrative wasn’t as all-consuming and it allowed some genuinely touching and insightful stories to be told. Book of the week goes to Titans: Rebirth for returning the series to its roots and finally giving the team the respect it deserves. The dishonourable mention goes to Green Lanterns which for a series about the emotional spectrum has very little heart. Next week looks to be a calmer week, but with Wonder Woman and The Flash on the ticket, it’s sure to be a good one. Until then, happy reading.