MFR described the first issue of Buzzard as “unapologetically British, with a punk rock flair and off-the-wall violence.” This second issue brings more of the same charisma and action as the first, this time with an added bonus of character development.

Buzzard is created by Andrea Wolf, with art by Ezequiel Assis, cover art by Samuele Zardinoni, and cover graphics by Rob Jonesand. You can help fund the second issue, which is currently on Kickstarter.

Welcome to modern Britain: a lost land where folks look for meaning in bizarre places, with devastating results. CEOs double as vigilantes, bored millionaires role-play as neo-Nazis and jaded scientists toss ethics in the bin to chase massive leaps. All under the beady eyes of commoners too apathetic to give a damn.

Erik Lincoln aka Buzzard, obnoxious high-schooler-by-day/bladed-armed-hitman-by-night, navigates this chaos better than anyone. Is he a daredevil with peanuts for brains? I mean, yeah. But though he toys with his own life, he’ll do anything to improve his sister’s.

This balls to the wall action-comedy delves with irony and gusto into the contradictions and challenges of today’s world, fueled by British humor and running on a manga edge. 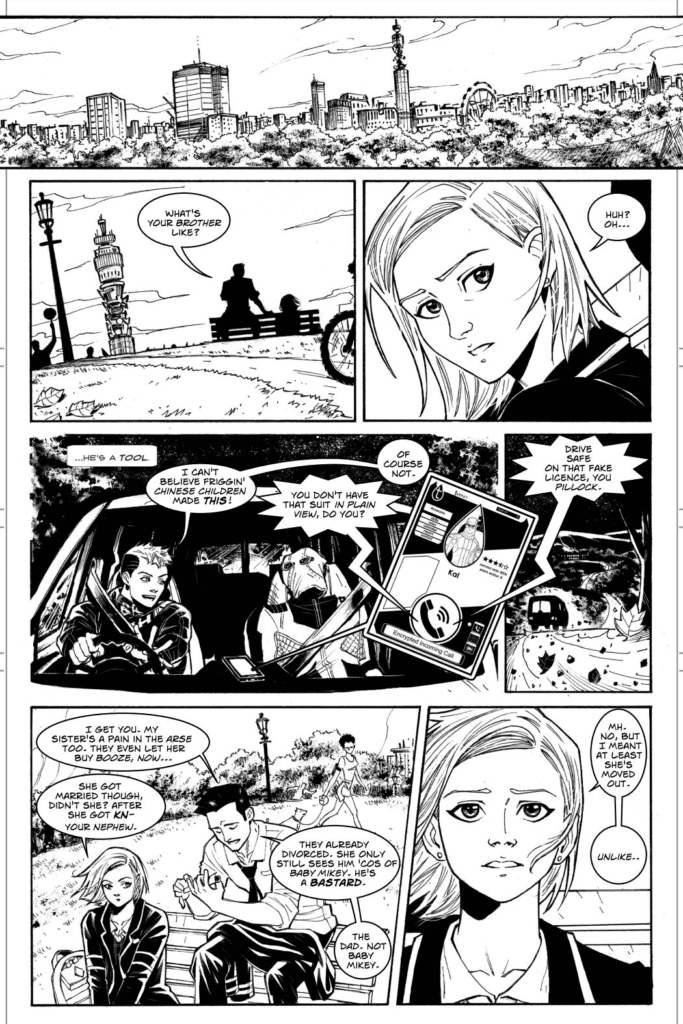 What writer Andrea Wolf did to make the first issue of Buzzard entertaining and successful is very much alive and well in this second issue. It was described as having loose and raw dialogue, which it still has. This time, however, Wolf includes some of the back story for Erik (aka Buzzard). We are also introduced to Mathilde, Erik’s younger sister. These moments in this issue really add some depth to the various characters, and the world that they inhabit.

But make no mistake, there is action to be had in this book. Now with super hi-tech arms, Buzzard takes on the upper class, low-key Nazis, as well as their thugs-for-hire, with bloody brutality. There is some high flying combat at just the right moments sprinkled throughout the book. That, coupled with the aforementioned character development, makes for a well-rounded installment in the Buzzard saga.

Artist Ezequiel Assis returns with spruce linework that still manages to have a bold intensity to it. This time, the “Manga edge” that is mentioned in the above synopsis is very much apparent, more so than in the first issue. Assis makes good use of Manga elements, such as Mathilde’s big, expressive eyes, as well as the speed lines during the action sequences. All of it helps make the artwork in Buzzard #2 fun and energetic, and a laudable compliment to Wolf’s story.

You won’t regret picking up this fun, action-packed independent comic. It’s got the best parts of Deadpool and Kingsman.

You can support Wolf and the second issue of Buzzard which is currently being crowdfunded on Kickstarter. You can also support the creative team by following them on Facebook and Twitter.

You won’t regret picking up this fun, action-packed independent comic. It’s got the best parts of Deadpool and Kingsman. Review: BUZZARD #2 Is Fun, Energetic, And Violent