Action Comics #1019, written by Brian Michael Bendis, with pencils by John Romita Jr, inks by Klaus Janson, colors by Brad Anderson, and letters by David Sharpe, spins its wheels but goes nowhere. While previous issues of Bendis’ Action Comics/Superman run would tread water in promise of more to come, in this issue the promise feels empty. While other issues have tackled the fallout of Superman’s recent reveal, or the crisis that lead him there, this issue runs in place. 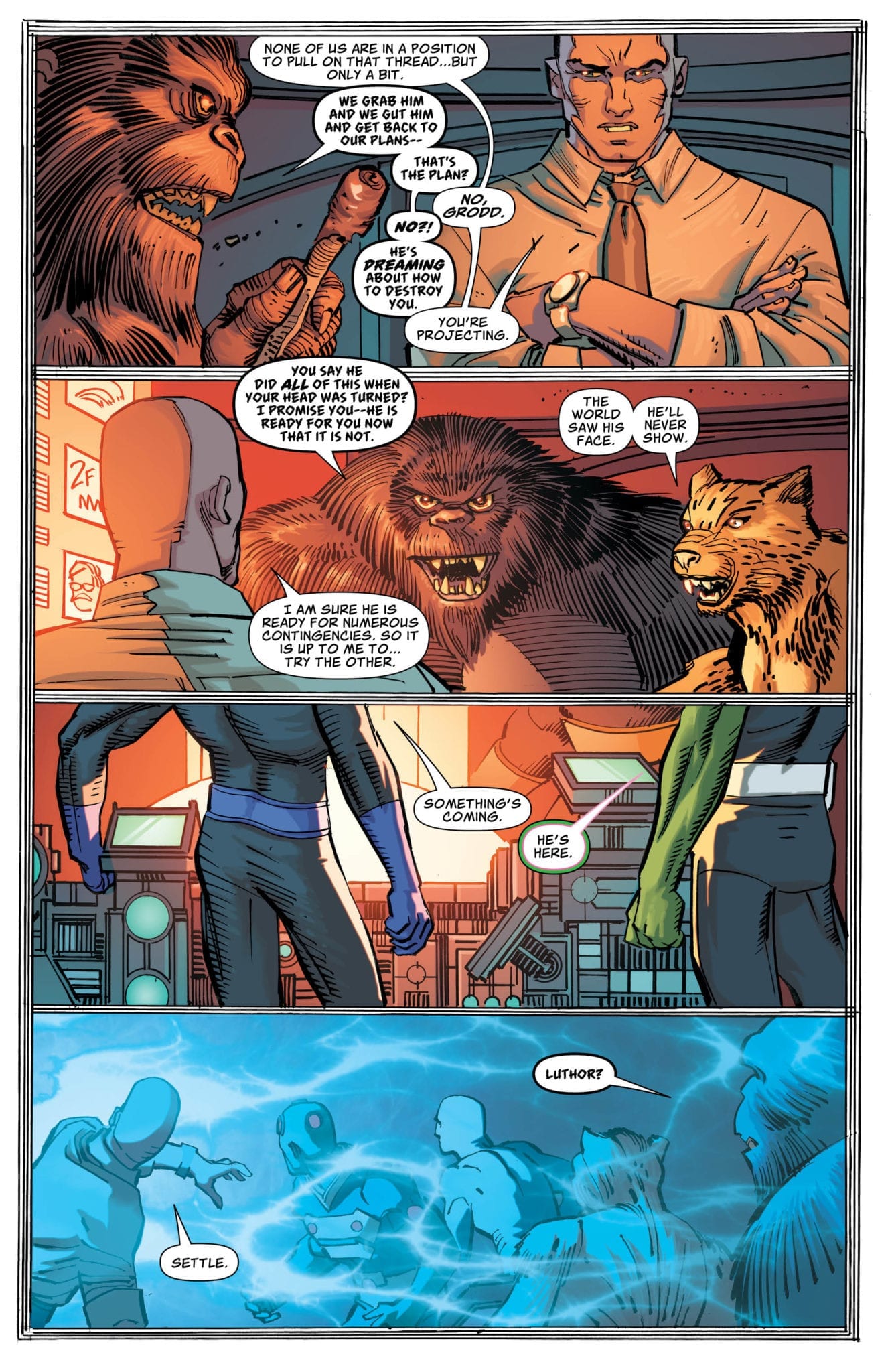 Part of the struggle Bendis seems to be having in this issue is finding a unique voice for some of his characters. As the Legion of Doom sit around, discussing next steps, one gets the impression that this sounds more like Bendis talking to himself. Perhaps the series is waiting for DC to catch up to recent changes, but if it is an editorial mandate to slow down, the creative flow of this series is suffering. The characters twiddle their thumbs, almost literally. With yet another issue promising all hell will break loose soon, one begins to lose hope.

Romita Jr and Janson’s work suffers similarly to Bendis’. Many of the characters not only sound alike, but look remarkably similar too. Faces are rarely very differentiated, to the point that a cheetah and a gorilla never looked so alike. Despite this, Romita Jr and Janson’s approach allows readers to appreciate the form of a comic in a unique way. Choosing stylistic renderings over realism, the team allows us to see their art as drawings. They want us to notice the form and the details.

Anderson’s coloring continues its theme of blues and reds. Anderson adds to his palette with an interesting inclusion: purple. Seems like a no-brainer, but purple being the new color-code for Lex Luthor gives this shift deeper meaning. It’s thanks to Anderson that we get much of the ambiance of this issue. The darker tones and constant shadows give us the sense that a storm is brewing. 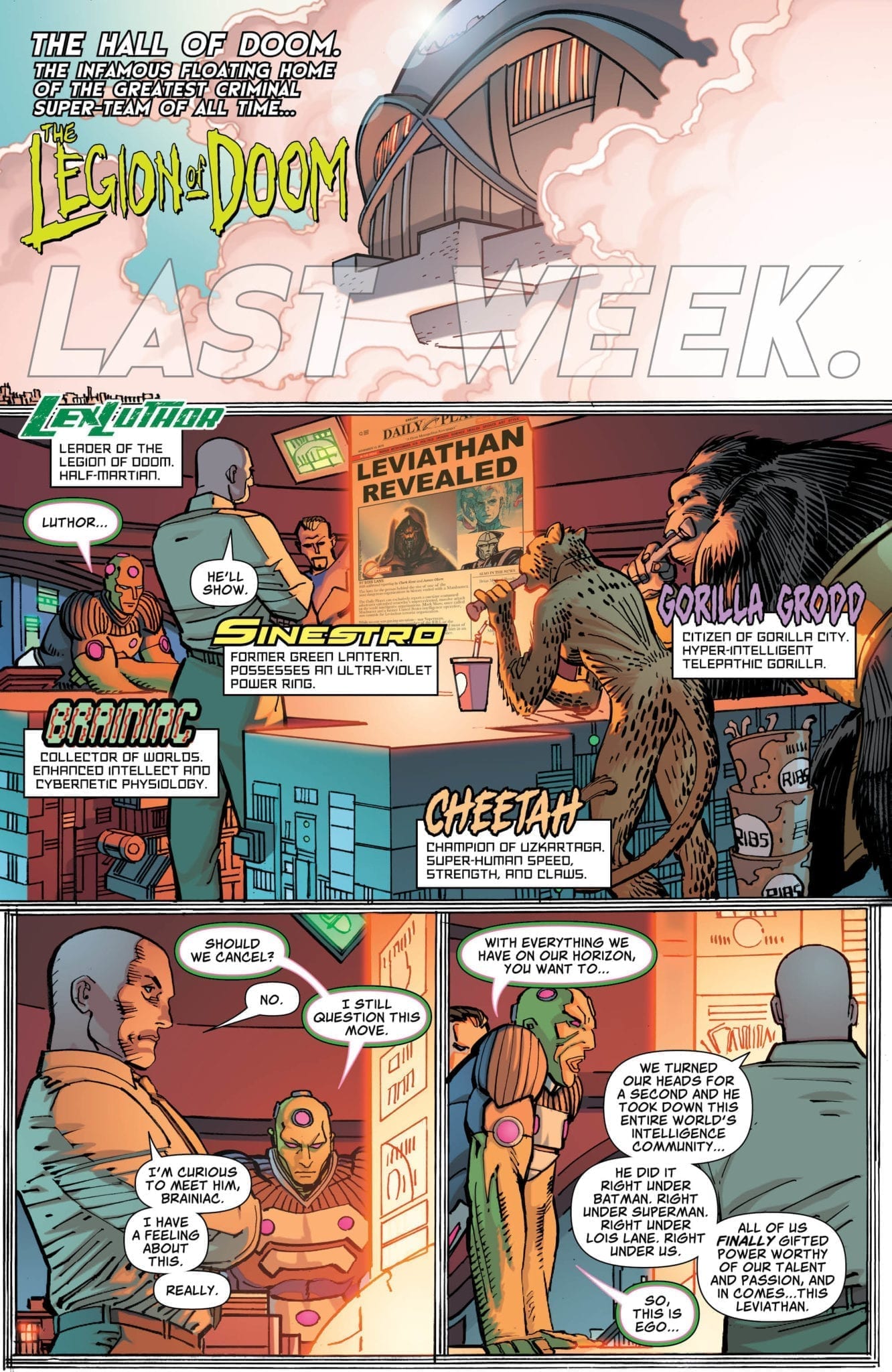 Sharpe’s letters also take a bit of a decline in this issue. While Sharpe certainly varies his use of lettering styles, the styles often seem at odds with what is going on on the page. A collection of sound effects in a fight between Grodd and Superman seem so out of place they almost seem like editorial mistakes. And when a role call is given for the members of the Legion of Doom, their names are shown each in a different style. The coloring and even the crisp outline makes it feel like it’s been cut out of a magazine and taped onto the page.

While much of what this creative team has been doing on this run has been phenomenal, this issue was a swing and a miss. The plot refuses to go anywhere and the stylistic choices are starting to feel tired and worn out. Though I hope for a good follow up in the continuation of the saga, you could skip this one without much of a problem. Pick up Action Comics #1019 today at a comic shop near you.

The creative team has been on a roll, but this issue is a bump in the road. ACTION COMICS #1019 Review: The Series Begins Running in Place