Action Comics #1018, written by Brian Michael Bendis, with pencils by John Romita Jr, inks by Klaus Janson, colors by Brad Anderson, and letters by David Sharpe, slows down the pace in order to set up big things in the coming months for Superman. While the issue itself is somewhat lackluster, you can be sure the next issues won’t be.

Bendis doesn’t offer up many “aha” moments in this chapter of his run with Superman. We see the origin of the Red Cloud. Ultimately, the answers are a little less interesting than the mystery. Though we get a glimpse at why Red Cloud has some anger issues, it happens at the expense of the believability of many of the other characters in her origin. Elsewhere, we see the Man of Steel prepping for the big reveal that happened in the latest Superman. And finally, we get another glimpse at the fight between justice and doom. Perhaps it’s DC that’s dragging their heels to get to the climax of their Year of the Villain, not ready to end their arc. 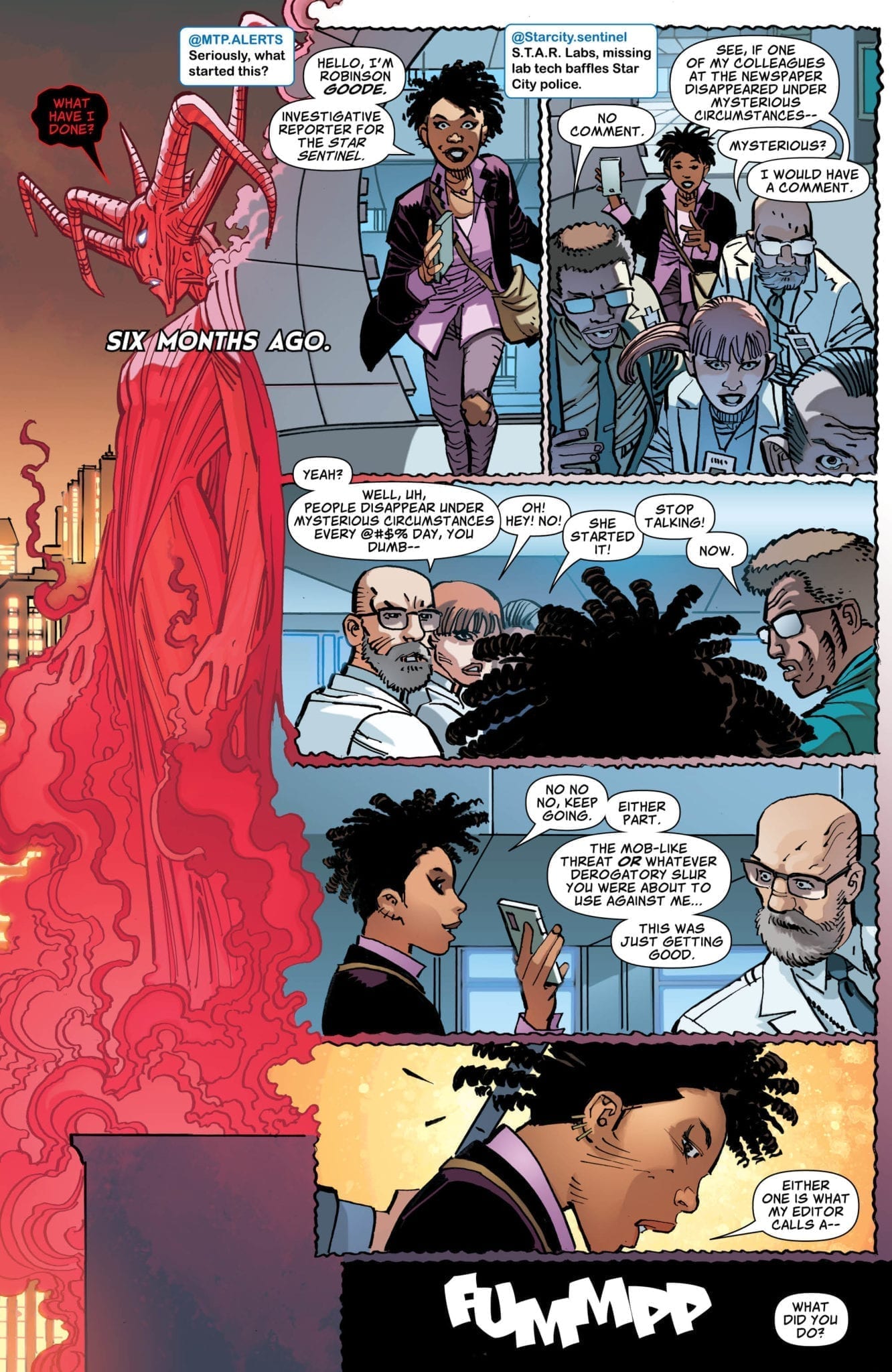 The art by Romita Jr. and Janson delves into a “looser” style in this issue. We see the art that both of these artists have become known for. The etchings on the sides of faces, the lamp posts that look like quick sketches. The art becomes more noticeable with this style. We are more aware that these are drawings. This can have a dual effect. At times we are marveling at the beauty of the rendition of a character; at other times, it feels we’ve been drawn out of the story.

While much of Romita Jr. and Janson’s work leads to marveling, a few moments are noticeably confusing. When the Legion of Doom headquarters hovers over Superman, we lose all sense of perspective and size. Some fights scenes feel too cluttered to stand out. But in the end, Romita Jr. and Janson are making us keenly aware of the actual format that we are intaking this story. We get to admire these comics like we’re reading comics for the first time.

Anderson’s coloring follows his themes in previous issues. We see reds and blues dominating a lot of the pages. Previously, I’d mentioned it felt like Superman was off his center, and Anderson’s coloring was showing his sense of identity was leaking out. Now that we’ve seen what happened in the latest Superman, the colors in the latter half of this issue have a more contained feel. It creates a sense of safety, as each color is bordered in completely. But with the final page, we see reds and blues streaking all over the place. The time of safety has passed. 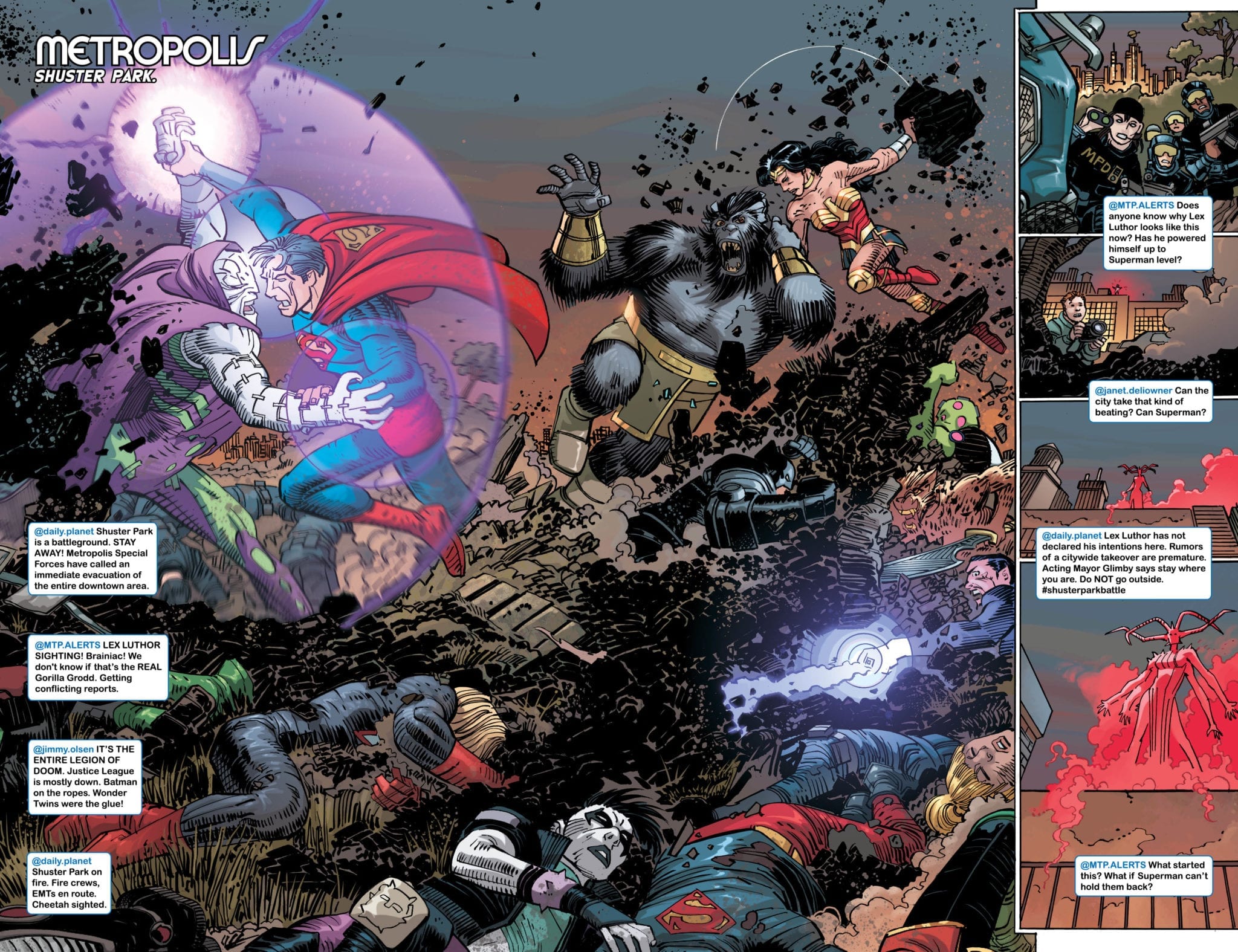 Sharpe gives this issue its pacing. During Red Cloud’s origin story, Sharpe’s placement of the speech bubbles provides us with a sense of fear and panic in everyone’s voices. We see people trying to interrupt each other, yet everyone is still speaking loud enough to be heard. Sharpe shows this by stacking the speech bubbles on top of one another while never overlapping. It’s also in the lettering we see Clark coming to terms with his recent decision. He speaks calmly and succinctly, even when met by panicked smaller bites in response.

Action Comics #1018 is an entertaining issue, but it acts more as a placeholder than anything else. It seems as though the creative team pulled back a little here as a wind up for the coming event. It’s worth the read, especially to know what might be coming in the near future. Pick up Action Comics #1018 at a local comic shop near you!

Action Comics #1018, written by Brian Michael Bendis, with pencils by John Romita Jr, inks by Klaus Janson, colors by Brad Anderson, and letters by David Sharpe, slows down the pace in order to set up big things in the coming months for Superman....ACTION COMICS #1018 Treads Water to Set Up Big Things for Superman