Action Comics #1017 by writer Brian Michael Bendis, penciller John Romita Jr, inker Klaus Janson, colorist Brad Anderson and letterer Dave Sharpe shows us what a day in the life of Superman is, when he’s playing catch up. There are plenty of comics out there with the Man of Steel showing his mettle, but rarely does he seem quite so off-kilter as in this issue of Action Comics. 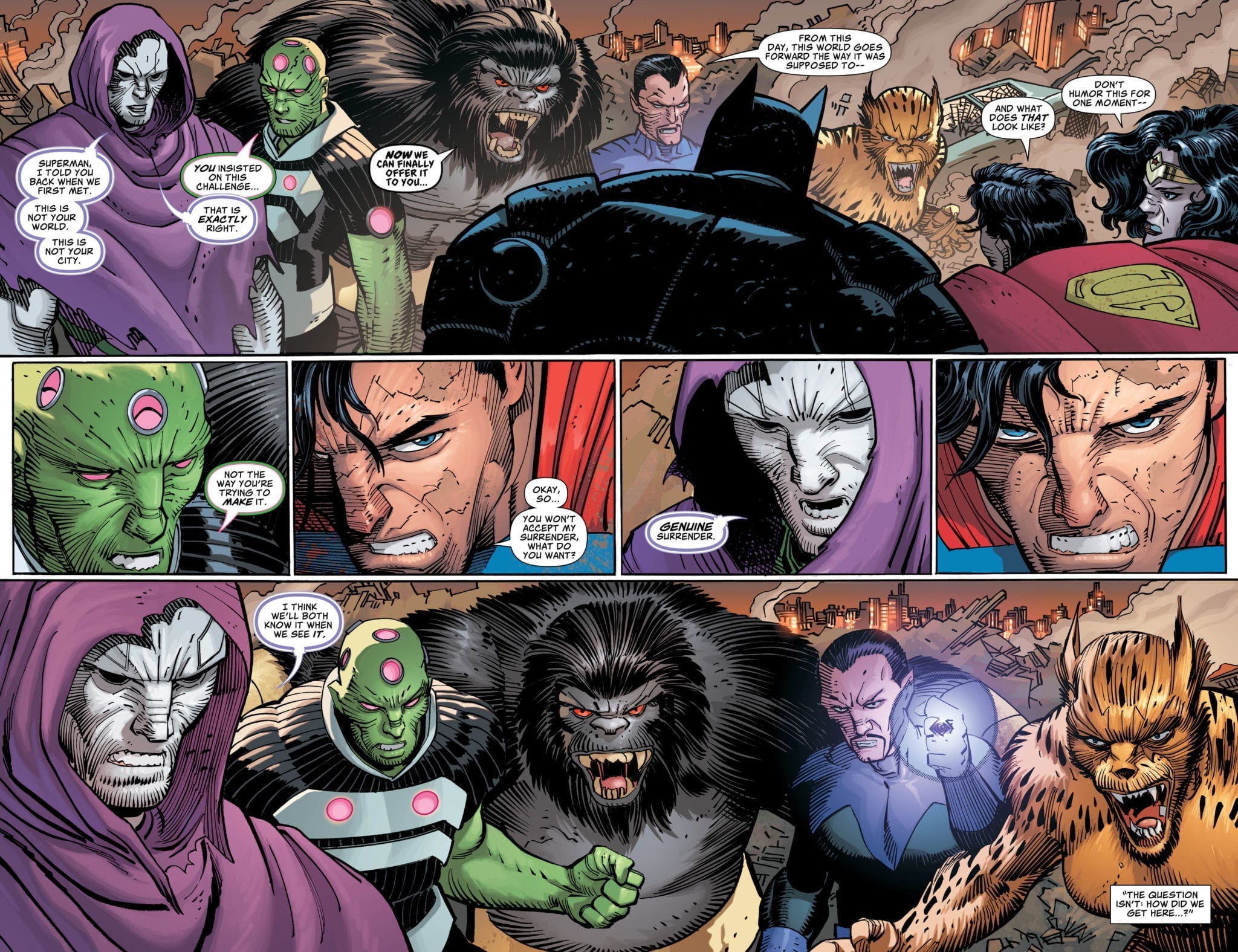 Bendis skips the usual fights and brawls throughout this issue, and quickly shows us that no matter how fast Superman can throw off his opponents, they seem to have him cornered. With readers only seeing the aftermath of attacks and escapes, we enter into Superman’s frame of mind as we piece together the jumbled moments and try to figure out what we missed. When Superman is cornered by apes in Gorilla City, who he thought were his allies, we don’t see the punches. We see Clark rush into the Daily Planet, having apparently escaped, to write about all the developments that keep cropping up. It’s an uncomfortable approach to the story, but that seems to be Bendis’ point.

Romita Jr and Janson’s art is phenomenal as usual. When Superman faces off with the Legion of Doom, Romita Jr and Janson show Superman’s ill-footing as they show him stumbling across rubble, turning his back to the reader and constantly looking up at the group from a lower position. We get the sense from Clark’s body language and placement on the page that he is not the one in control of this situation. The Legion of Doom know what they’re doing and have earned their place in the center of the panel, facing out and standing tall. Even Romita Jr and Janson’s simple omission of pupils from characters like Lex Luthor and Brainiac adds a layer of mystery to the characters. It helps the characters look like they are scheming below the surface and that their faces only tell us half of what is going on. 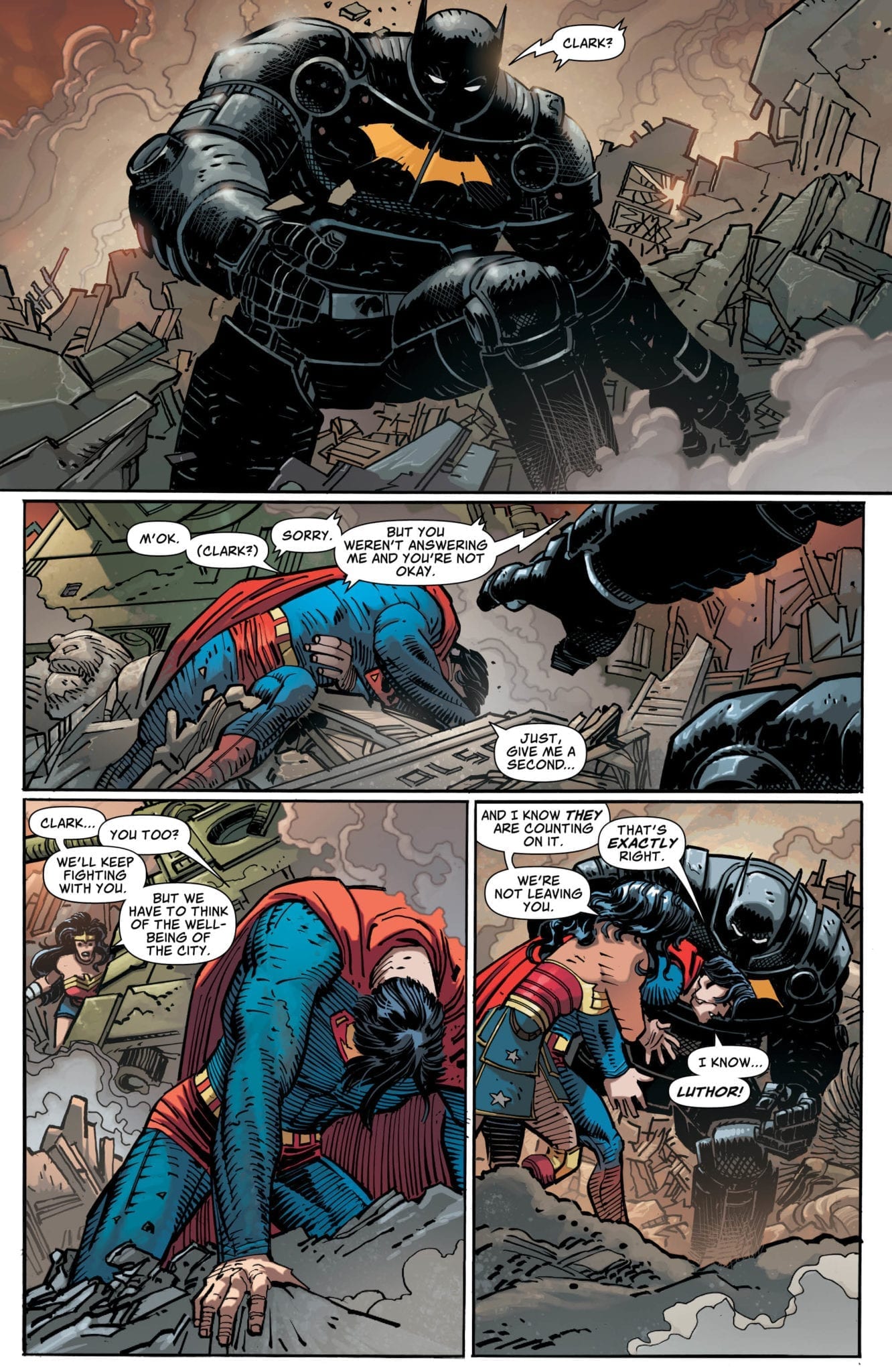 Anderson’s colors are not only gorgeously paired with the artwork to create a sense of depth, but as a whole they almost seem like a Superman-colored flag. We get whole pages that take on a bluish hue, and later we have large explosions and streaks of yellow across the page. We get scenes of Superman flying through the sky in a red blur to scenes of fires being put out by firetrucks lighting the night sky with their red emergency lights. It almost makes it feel like Superman’s identity is bleeding off of him. He isn’t able to be who he wants to be in this moment, and his color scheme is radiating off of him as though he’s losing his sense of self in the environment of chaos.

Sharpe’s lettering is just plain fun. His division of dialogue among bubbles gives us a sense of the difference between these characters. Perry White’s large uncut paragraphs show his propensity for lectures, while Jimmy Olsen’s tiny quips show how much he’s used to being chucked out of the room before he’s done talking. When Perry is listening into Clark and Ms. Leone’s conversation at the door, Sharpe shows this as a gray lettered bubble, quickly overlapped by Jimmy’s interruption. All in all, Sharpe truly experiments with lettering here and the results are noticeable and entertaining.

Action Comics #1017 is an interesting comic, given the series’ title. A lot of the action is this comic takes place off-panel, yet with writing and art like this we feel as though we know what it’s like to don the “S” shield during a hectic day. This story makes it clear there is much to look forward to in the coming months. After all, what could really keep Superman on his toes?

Action Comics #1017 by writer Brian Michael Bendis, penciller John Romita Jr, inker Klaus Janson, colorist Brad Anderson and letterer Dave Sharpe shows us what a day in the life of Superman is, when he's playing catch up. There are plenty of comics out there...ACTION COMICS #1017 Skips the Action