X OF SWORDS Aftermath: 4 Ways That X OF SWORDS – DESTRUCTION #1 Is Like AVENGERS: ENDGAME

X of Swords – Destruction #1 brings to a close the long, drawn-out event which altered the status quo of the X-books moving forward, and laid the groundwork for future plots and developments. This event meandered at times and relied a bit too much on fake-outs, people standing around talking, and anti-climactic challenges to move its plot forward, but it ends with a bang!

As I read this final issue, something about it seemed familiar, and then it hit me: Hickman, Howard, and company are going for an Avengers: Endgame vibe!

Maybe that wasn’t their intention, but that’s what this event feels like. Here are four reasons why X of Swords – Destruction is like Avengers: Endgame.

1. Mediocre parts and an explosive ending.

I should note that I am a fan of the MCU, but I’m an honest fan. I can acknowledge that large swaths of the MCU are inconsistent in quality, and that for years, it seemed like very little plot development could occur in the MCU movies because they had a twofold task of a) keeping the story going, and b) keeping enough things the same until their dramatic culmination in Infinity War and Endgame, all while telling a mega-story with multiple writers and directors.

This means that some franchise movies were “filler,” “just ok,” or became weighed down managing multiple MCU plotlines (i.e., Thor: The Dark World, the first Ant-Man, Avengers: Age of Ultron, etc.) while others were “more meaty” and became the pulsating heart and backbone of the MCU (i.e., Winter Soldier and Civil War). But it all culminated with Endgame, an explosive finale that provided closure to the Infinity Saga while setting up a new status quo.

I’ve noted in earlier entries about what I’ve come to think of as the mediocrity of at least parts of the X of Swords event, like dinner parties and conversations that last 2-3 issues while I waited for a tournament to begin, which then consisted of contests portrayed in only one panel, all drawn out across multiple X-titles until it finally culminated in X of Swords – Destruction.

This event, however, was not without its gems. Wolverine’s title was consistently top-notch, while Storm’s fight with Death highlighted her character’s strength and ingenuity. There’s a reason why she was the X-Men’s leader for so long during Chris Claremont’s run!

Of course, despite my problems with this event, the multiple writers and artists made it read as a consistent narrative across the X-titles, for an event whose culmination will hopefully cause this event to be greater than the sum of its parts when read as a whole.

There are two notable “F@ck yeah!” moments split between Infinity War and Endgame (well, three if you count “Thunder Cap,” but I’m not dealing with that here). The first is during the Battle of Wakanda with the arrival of Thor, Rocket, and Groot.

X of Swords – Destruction has its own “arrival of Thor” moment with the return of the Captain Britain Corps! Tell me the following image doesn’t look a little “bi-frosty.”

Mystical back up arriving in a stream of light to fight a terrifying, faceless army? I’ve seen this move before. But I still like it.

But this is only one of the “F@ck yeah!” moments in this issue. The other, and much more “Endgame-y” moment arrives in the form of every X-Man ever showing up to save the day. 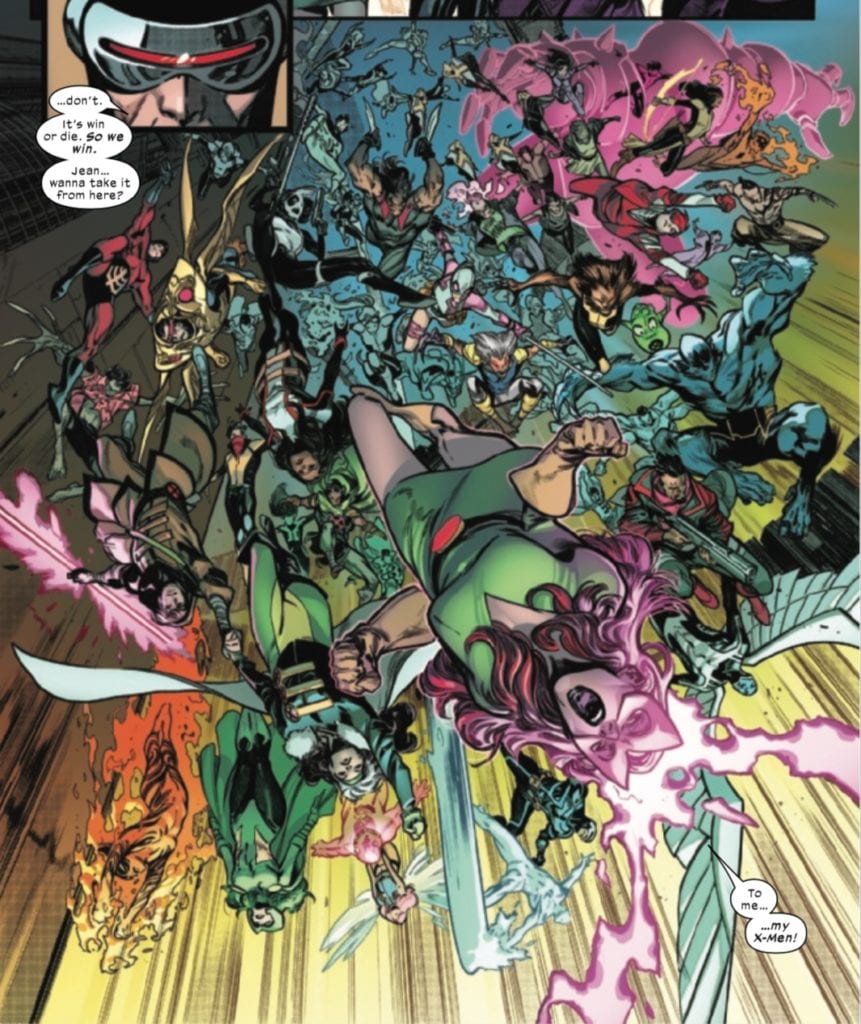 This wouldn’t be the first story to try to copy the Endgame formula of having the calvary, consisting of multiple characters and cameos, show up and save the day. Rise of Skywalker tried this (to far less fanfare) with the arrival of Lando Calrissian in the final act of that movie, but I think it works better here in X of Swords – Destruction. And like Endgame, the arrival of back-up, while a cool moment, doesn’t guarantee success, but only with the sacrifice of a champion, for the sake of both his world, and his family.

3. A main character takes possession of an ultimate weapon to save the day.

Robert Downey, Jr.’s Tony Stark was the heart and soul of the MCU for eleven years. His death by taking the Infinity Gauntlet from Thanos dealt the final blow to the Mad Titan and his army. Likewise, X of Sword‘s main protagonist (arguably), Apocalypse, was able to win only by taking the source of his wife’s power to control the Amenthi army, the Annihilation mask. 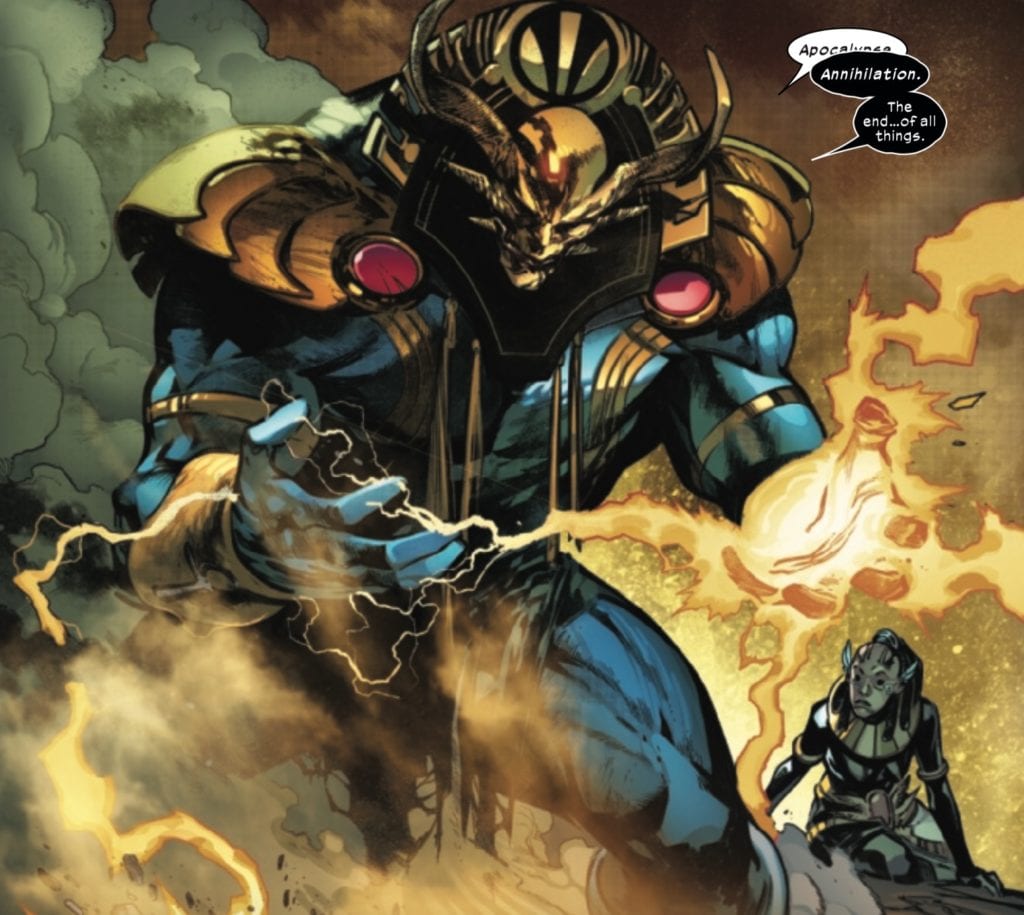 By taking the mask and surrendering, Apocalypse is able to bring the battle to an end, and while he must join his wife and children in Amenthi, he saves Krakoa.

4. The story is brought to an end and sets up a new status quo.

While Avengers – Endgame brought a certain amount of closure to the MCU, it was far from a true ending. Certain character arcs were concluded, but a new status quo was set up in the MCU. People would have to live with the consequences of “the Blip.” Sam Wilson became Captain America, and Thor abdicated his throne and left Valkyrie in charge of Asgard. Endgame left us a world without Tony Stark or Steve Rogers. Plus it set up a bunch of new Disney+ Marvel shows.

Likewise, the status quo of the X-titles was changed by the conclusion of X of Swords – Destruction. We are now out of the “Dawn of X” era and into “The Reign of X.” Apocalypse joins his wife and children in Amenthi, and Arakko and its mutants have joined Krakoa, thus altering the dynamics of the mutant nation. The Quiet Council has experienced a dramatic shift. The X-Men have been restored as a team, and now run the former S.W.O.R.D. base, with Al Ewing launching a new title centered around it.

Of course, every comic event by its nature changes the status quo of a universe somewhat, some more than others. X of Swords – Destruction definitely alters the X-Men’s status quo moving forward, even though the entire event plodded along a bit aimlessly sometimes. House of X/Powers of X gave us a hint at where the future of the X-titles is heading, even as Dawn of X laid the groundwork of the new status quo while setting up the first big event in Hickman and company’s run. X of Swords – Destruction gives us some idea of what lies in store, providing an opportunity for some truly unique X-stories, while hopefully avoiding the sometimes-plodding pace of this event.