Review: The Classic Twins are Back in WONDER TWINS #1

The Wonder Twins are reborn for a new generation.

First came Young Justice. Then came Naomi. Now comes the third series of the Wonder Comics imprint. The Wonder Twins are a famous part of DC’s television history as a part of the Super Friends. Since then, they’ve stayed under the radar in the comics, making the occasional appearance but not taking the lead. I can see why, as their powers are often the butt of the joke. Animal transformation is fine, but it’s hard to justify turning into a body of water. So how will the Wonder Twins fit in the modern world of DC? 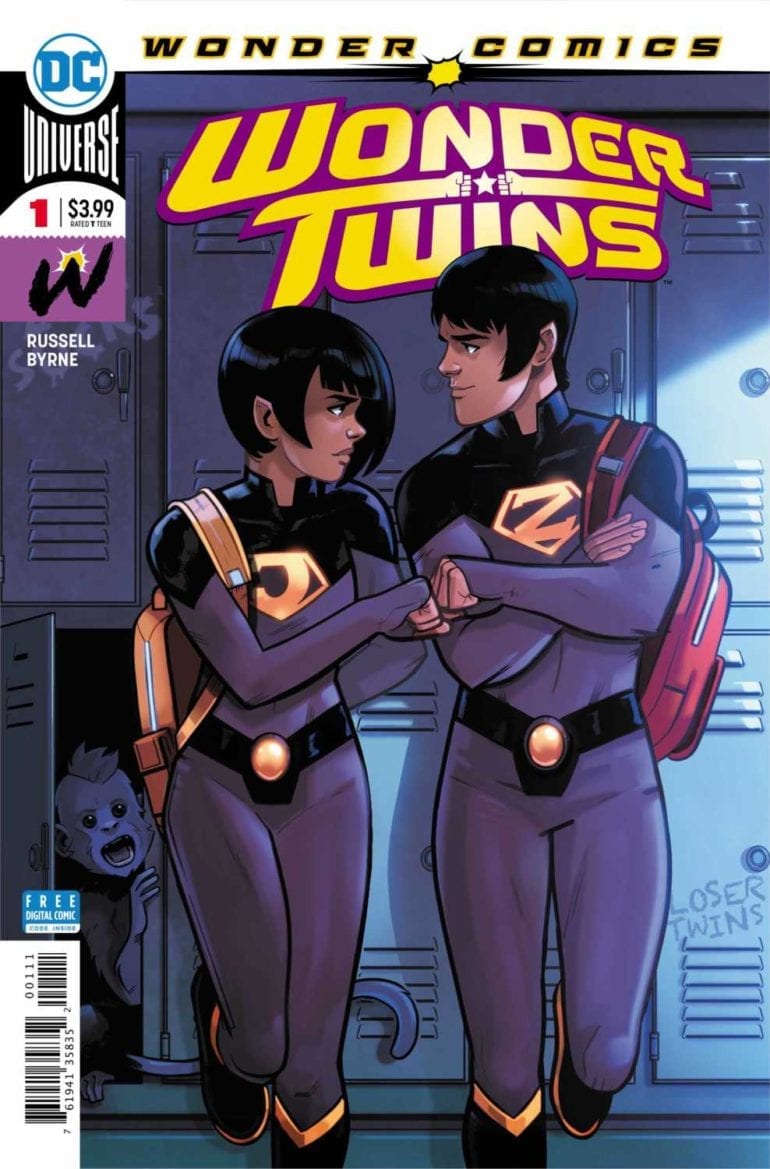 We open this first issue with the twins in an environment they’ve never been before: School. The pair try to navigate their new lives, but their alien ways give them a hard time fitting in. After school, The Wonder Twins head off to their new part-time job with assisting the Justice League. They get monitor duty, but they get distracted by talking about their high school aspirations. Zan in particular hopes to become a popular kid with a cool nickname. The next day at school, however, he gets a nickname that he didn’t quite expect. 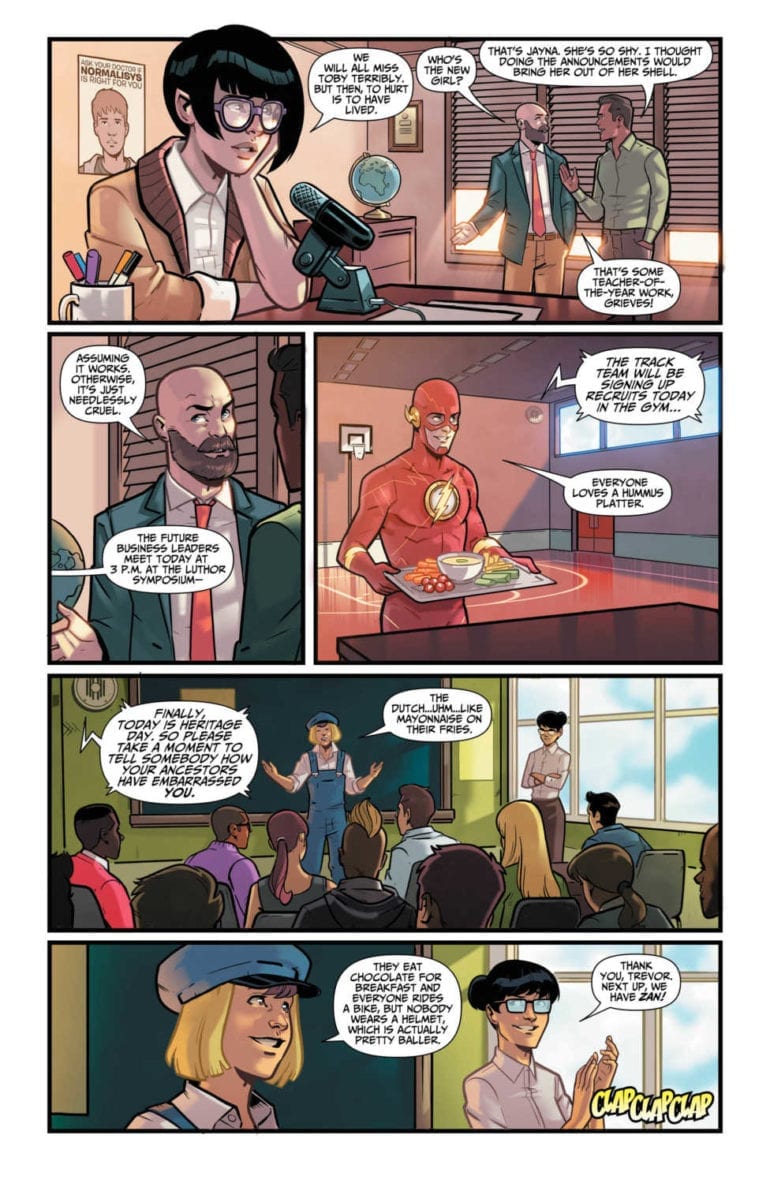 This comic is weird yet relatable at the same time. The Wonder Twins definitely have their quirks, but they are also teenagers. They are awkward, have dreams of being popular, and get embarrassed. While their circumstances are indeed different, this comic captures what it means to be a teen.

Along with that, I had fun with the lightheartedness of the comic. Heroes in Crisis, Doomsday Clock, and so many other stories have been themed to the dark and dreary. While these stories are good, sometimes the dark gets a little much. In a landscape shaped by the tragedies, it’s nice to have a comic that made me smile. 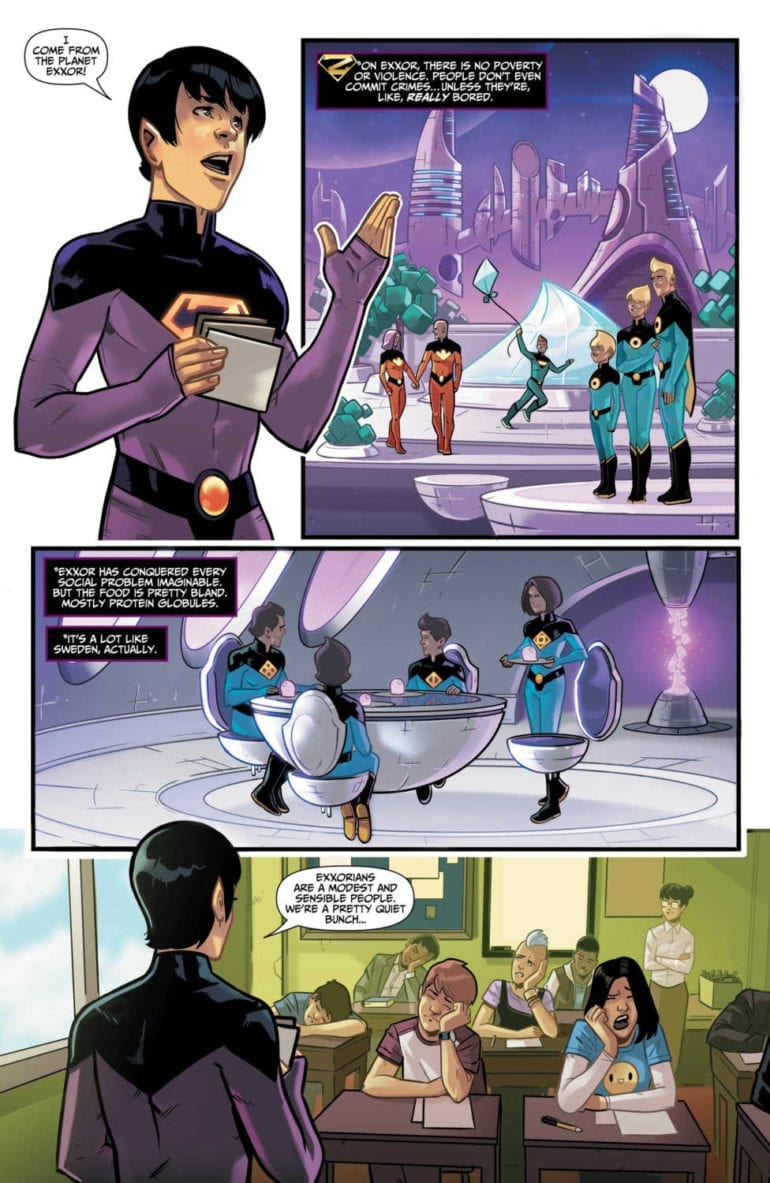 The art, like the Wonder Twins, is definitely out of this world. Stephen Byrne is credited as the artist, and his illustrations are amazing. They have a beautiful style that walks the line of keeping it grounded and being outrageous. What I mean by that is one panel can get laughs with Zan’s daydreams but also have grounded emotional pep talks. Add that to the beautiful vibrant colors which bring the world to life. This is fantastic art for a tremendous opening issue.

Overall, the first issue of the Wonder Twins took me by surprise. This comic is funny, lighthearted, and captures the feel of being a teenager. The art is a feast for the eyes and fits the tone of the story. If you’re looking for a lighter book to sit back and have fun with, this might be the one for you.

1371
Find out how to get the
Monkeys Fighting Robots magazine!

Review: THE HARBINGER #2 – A Conflict on Two Fronts