WOLVERINE BLACK WHITE & BLOOD #1 – The Tragedy And Complexity Of Logan

Wolverine Black White & Blood #1 is the beginning of an anthology series featuring the tragedies and complexities of Logan. Three stories by different creative teams display different sides to Wolverine. Writer Gerry Duggan, artist Adam Kubert, and colorist Frank Martin display Logan’s early days within the Weapon X program in The Beast Within Them. The second story, I Shall Be A Wolf by writer Matthew Rosenberg, artist Joshua Cassara, and colorist Guru eFX go into Wolverine’s days as a soldier during WWII with Nick Fury. The final story, Cabin Fever with Declan Shalvey in all three roles, shows Logan at his most feral but compassionate. Tying them all together is letterer Clayton Cowles of VC.

Throughout Wolverine Black White & Blood #1, the reader sees the title character in many walks of life. It’s an appeal that can serve as both an introduction of Wolverine to new readers, while older fans see bits of Logan’s upbringing without continuity getting in the way. Gerry Duggan shows Logan in agony as he is thrust into danger by Weapon X. It’s there that Logan struggles with the animal Weapon X wants him to be and the humanity beneath all of it. 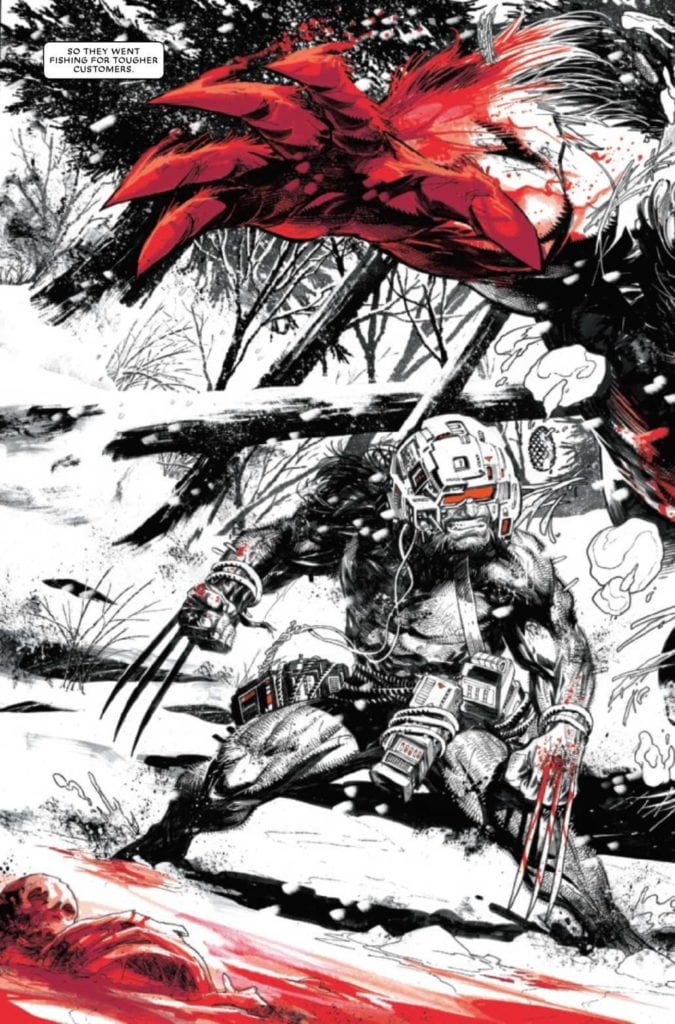 The subsequent stories of Wolverine Black White & Blood #1 bounce off of these two conflicting aspects. Matthew Rosenberg shows the animalistic hunter willing to put himself at risk to kill similarly evil men. Say what you will about Hydra’s origins, but hunting down Nazis with Nick Fury sounds satisfying. But then there’s Declan Shalvey’s piece where Logan’s berserker rage contrasts with his humanity. Despite all the darkness Logan went through, he is still willing to come to the aid of a crying child.

Life In One Color

Wolverine Black White & Blood #1 lives up to its title by displaying different art styles in only three colors. Adam Kubert gives The Beast Within Them a shifting point of view. Half of the pages are in double-page spreading grids where the reader is in a similar position to Weapon X. Everything on that end looks like they’re in control of the situation while Logan is thrust into danger for their amusement; so dangerous the pages turn into splash pages. To further illustrate this, Frank Martin colors the Weapon X staff in dark grays but are safe within red spaces. Compare this to the white outdoors where Logan fights the Wendigo and the splashes of blood decorating the setting. 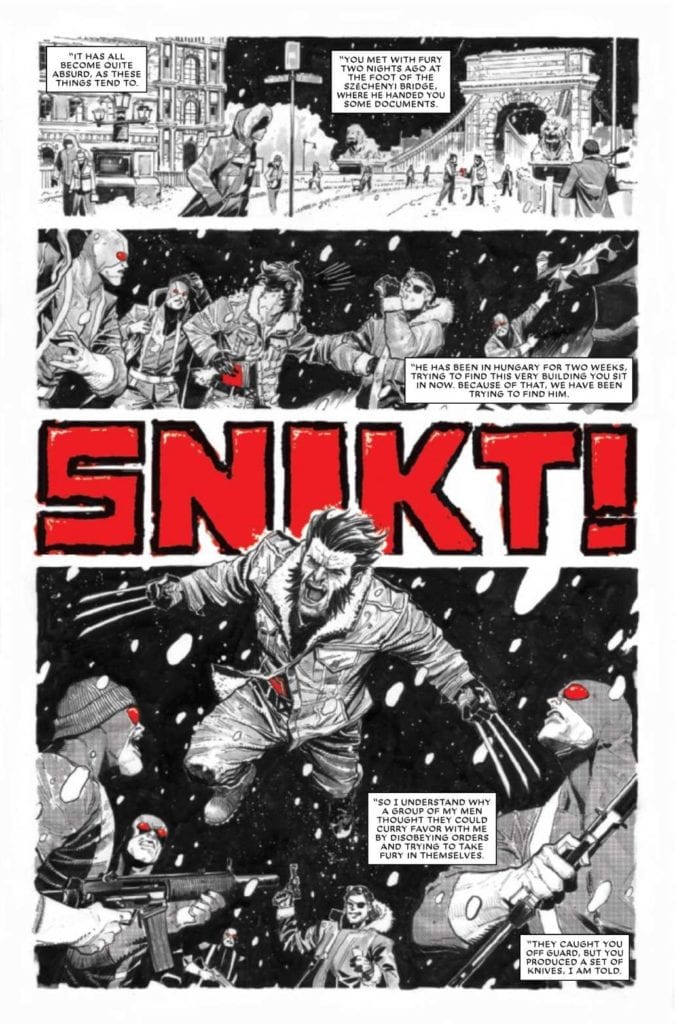 I Shall Be A Wolf has Joshua Cassara make most of the moments in the Wolverine Black White & Blood #1 stories feel like photographs. Considering most of the plot takes place in flashbacks, seeing each moment frozen in time gives the reader time to enjoy the carnage, complete with red coloring from Guru eFX to detail the bloodbaths. Finally, Declan Shalvey takes all illustrative duties of Cabin Fever, where he designs the emotions of everyone. But even the facial features mean little where red becomes a symbol of violence and sin. Not only from the men Logan fights but who he interacts with when the fight is over. Because who would dare bring a baby into the residue of carnage? 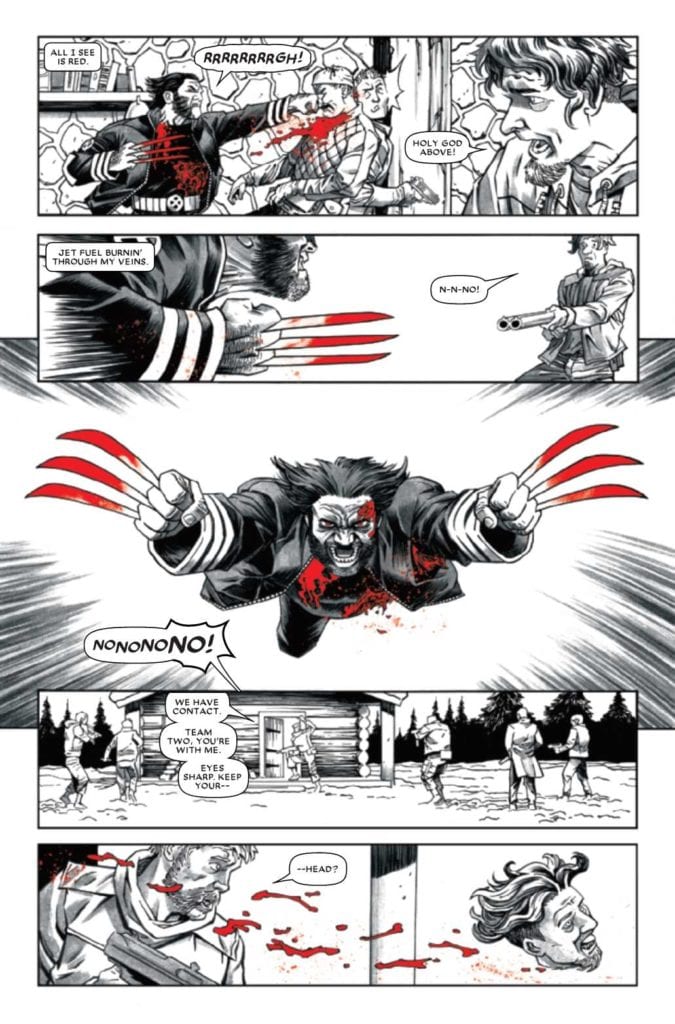 VC’s Clayton Cowles acts as overall letterer of Wolverine Black White & Blood #1. Throughout the anthology, Cowles uses different techniques to display character and emphasize action. In The Beast Within, one of the Weapon X scientists has black word balloons, showing her detachment from everything else. Unlike her superior officer, who speaks with red word balloons to show his antagonism towards Logan. In I Shall Be A Wolf, several wordmarks like Wolverine’s signature “Snikt” look tailor-made to display his claws’ impact. Finally, Cabin Fever displays the emotions Logan goes through in battle. When reason fails in reaction to brutality, Logan’s captions turn red with hostility until he can calm down.

When it comes to characters with decades of history and complex characterization, Wolverine Black White & Blood #1 gives readers easy access. Great storytelling can be told if everyone involved can bounce off one another. With a character as complex as Wolverine, there is a lot of ways to do that. All without getting in the way of decades of character development.

Wolverine Black, White, and Blood #1 is the first of many displays of the complex character of Logan. His tragic past, his creativity, and his compassion; with such layers fans now have an easier time of meeting this character in various capacities without continuity in the way.WOLVERINE BLACK WHITE & BLOOD #1 - The Tragedy And Complexity Of Logan