Why You Should Be Reading WASTED SPACE

Science fiction has always been a vehicle for exploring interesting themes and concepts. It’s a genre with inherent flexibility that lends itself to constant interpretation and re-interpretation. Some opt to focus on the philosophical opportunities that science fiction presents. Indeed, the expansive nature of the universe and the insignificance of the little space that we occupy within it has been the subject of choice for creatives in this field for decades. Equally, science fiction has been used as the setting for wonderfully pulpy romps where roguish captains rebel against tyrannical empires as often as they try to con their way into small fortunes. In this area, the genre has permeated itself into the popular conscientiousness. Both approaches are valid offering lasting depth and cultural resonance. Both contribute to a truly an ever-evolving body of work that caters to a wide range of tastes. Wasted Space from Vault Comics is that rare book that attempts to walk between those two worlds and succeeds.

My first encounter with Wasted Space was shortly after the publication of the second issue. The cover caught me straight away invoking the feel of an old Star Wars poster if it had been feed through a neon-graffiti fueled filter. Flipping through those first few pages, we find our protagonist: Billy Bane, former prophet turned vagabond whose last attempt to save the galaxy led to the rise of a despot. Now persona non grata in most civilized worlds, he spends most of his time looking for his next fix while attempting to outrun those after the huge bounty on his head. And that’s how it the book lures you in at the start. It begins by offering this promise of a Guardians of the Galaxy-esque adventure full of wit and spectacle featuring morally dubious characters just trying to get by. At the same time, however, it quickly embarks on a treatise about late capitalism, free will, and our relationship with the divine. What’s so refreshing about the approach taken by the team of Michael Moreci (writer), Hayden Sherman (artist), Jason Wordie (colorist), and Jim Campbell (letterer) is how seamless the pulp and profundity compliment each other.

The world we currently occupy is one that seems to be a twisted version of itself. Zealots hold sway over some of the great historical powers. The right is on the rise as the gap between rich and poor ever-widens. Reason has lost its resonance. In such a world it’s very attractive to consider this the handiwork of some other force, be it in foreign agents or the cruel act of an uncaring god. Wasted Space takes that idea and runs with it. Billy’s rejection of his role as “The Voice of the Creator” comes from the revelation that he’s been had, used as a pawn in a greater game. The notion that this all part of the “plan,” necessary for the common good (whatever that means), is bandied about as if that acts as a cure-all to relieve Billy of all responsibility for his part in the great lie that allowed the dictatorial Yam to take power. No matter how much the Creator hopes to convince him otherwise, Billy’s refuses to accept this narrative and absolve himself. This is what allows him to retain a semblance of self-worth even as he attempts to trick himself and the universe into thinking otherwise during his descent into a drug-induced oblivion. The willingness to admit responsibility is such a rare thing these days that it’s understandable why we begin to empathize with Billy as much as we do. I’ve written at length on this site about comics that invoke the feeling of helplessness that punctuates much of our discourse but Wasted Space distinguishes itself by taking a look at one of the orchestrators that brought it about and how one lives, or doesn’t, with that knowledge. Do you like revel in having gotten away with it, like Yam? Do you justify it, like the Creator? Or do you let the guilt eat away at who you were, like Billy? The book illustrates just how easy it is to give into the existential dread that would happily consume us while re-iterating to the need to rebel against same and fight for a return to normality.

Normality is, however, relative when it comes to Wasted Space. This is to be expected really when the book channels Firefly as much as it does Preacher. The cast is full of oddballs which help what might otherwise seem like heavy subject matter. Among the crew is Dust, an ex-mercenary android turned “fuq-bot,” who acts as the ship’s pilot and breadwinner as well as being one of the few willing to put up with Billy’s shit. He serves very much as the straight man of the group notwithstanding that his line of work often leads to him saving the day shortly after being found in a compromising position. The other member of the crew is Molly Sue, another potential prophet known as “The Vision of the Creator,” whose foresight convinces her that Billy is the only one capable of preventing a pan-galactic war. Molly Sue’s ability is that she can force people to see glimpses of their future, be it good or bad. Naturally, this means she’s picked up a few enemies along the way. Her ploy to act as the group’s conscience is helped by the fact that she also just happens to be the daughter of the despot Billy helped to install. The trio all bounce off each other personality-wise leading to the character clashes that you’d expect from such a romp but done in ways that reveal the festering tragedies and scars lying beneath the surface. They are each broken people trying desperately to put themselves, and the universe, back together. It’s an old theme, but it’s only that never ceases to speak true.

As Billy and company gallivant across the galaxy, they are pursued by the mysterious hulking being known only as Legion: a homicidal embodiment of the biblical parable who ostensibly seeks to prevent deviations from “the plan”. This lethal enforcer of some divine entity’s will is somehow endearing with a deadpan humor reflective of the unflinching black and white morality that such religions present. The nature of Legion is certainly up for debate with his appearance being a somewhat strange mix of organics and technology. Legion is quite unlike any depict of angels or demons you’ve ever seen, and the otherworldly quality that Campbell adds to his speech balloons certainly emphasizes that. It’s an absurd universe but one that merely reflects the absurdity of our times. In Wasted Space it’s the politics that is wrong rather than the multitude of increasingly bizarre characters, worlds, and scenarios featured.

All of the humor, heart, and is extenuated by Wasted Space‘s art. Sherman has a strong sense for storytelling, each line filled with purpose and intent. Stylistically, however, he might be described as unconventional in a comics landscape where realism in the mode of the day, Sherman opts for the impressionistic. In re-reading the book for this article, it strikes me how much Sherman excels at capturing the essential quality of each local and making the world feel lived in. When combined with Wordie’s colors, the result is a book that at times invokes the spirit of Sienkiewicz while retaining its own distinct, psychedelic identity. There is tangibility to the artwork, and if you didn’t know better, you might think the ink and paint would rub off on your fingers as you flick through its pages. There simply isn’t a book on the shelves that looks quite like this.

As Wasted Space begins its second arc with issue six the series is only getting weird and all the better for it. The success of the book can be seen not only its critical reception but in its becoming Vault Comics’ first ongoing series. Why is that? What sets it apart from other titles on the racks? Perhaps it’s because it acts as a much-needed reminder that thought-provoking science fiction doesn’t have to be inaccessible. It turns out that it’s a “fuq’d” galaxy, so let’s keep it that way. Wasted Space is anything but wasted time.

Wasted Space is published by Vault Comics and the first collected volume is available in all good comics shops. You can download the first issue for free here. 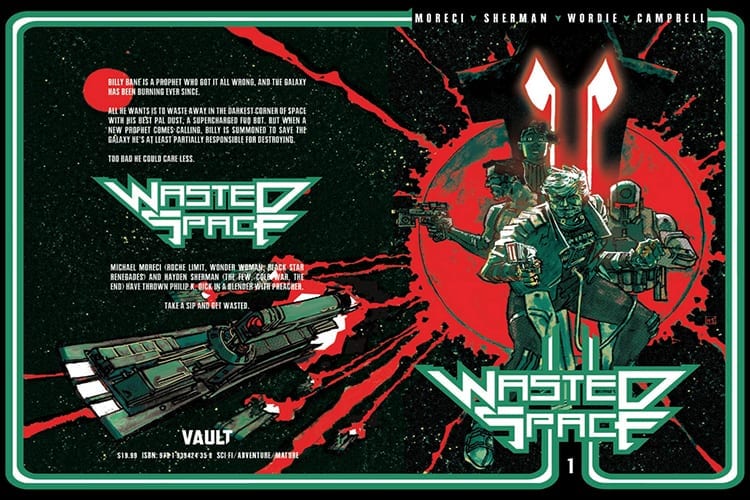 Review: THE RUSH #1 and the Desperation of the Gold Rush