WAR OF THE REALMS Wraps Up Flawlessly

Jason Aaron’s massive epic, WAR OF THE REALMS, comes to a close with issue #6. It all comes down to the multiple Odinson’s to stop Malekith’s reign of terror. 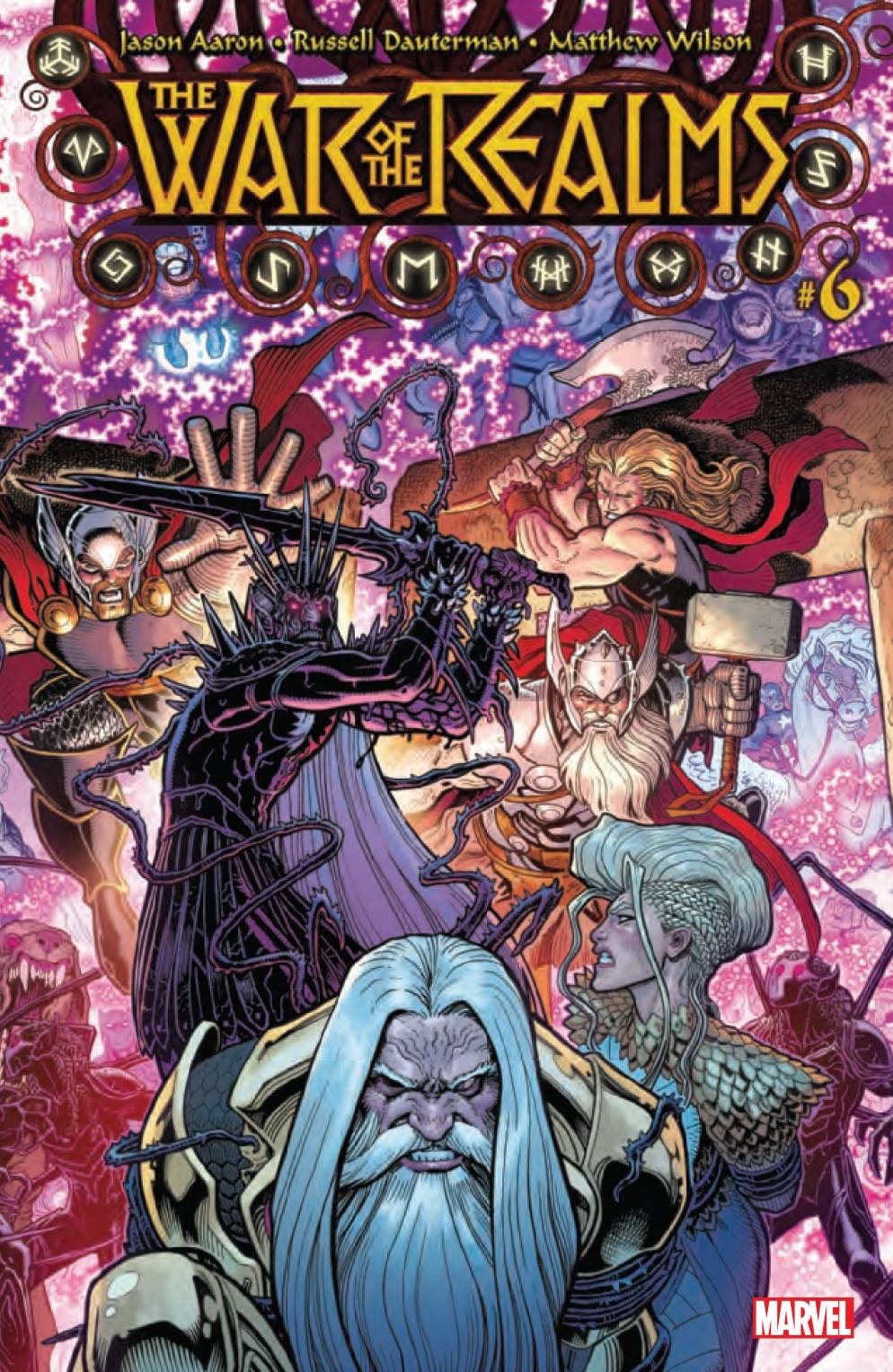 It’s been said over and over again, but we’ll say it one more time. Jason Aaron has been writing this Thor story for a very long time and it’s been a fantastic journey. War Of The Realms is very much a culmination of everything that he’s written before. This was a story eight years in the making.

With that kind of groundwork having been laid, the final siege against Malekith being lead by the many Thor’s of Aaron’s long run is extremely satisfying no matter how long you’ve been following along.

While the Thor Collective takes Malekith on, Earth’s Mightiest heroes dispatch his allies on Midgard. Each and every scene of triumph and interaction between our heroes is memorable and unique to this story. Jason Aaron utilized the advantages of crossover epics like no other creator has since Civil War. Incorporating all of the 616 into this fight for our realm where everybody gets a moment to shine.

War Of The Realms #6 has quick and easy payoffs for almost every character. Things that were set up and developed throughout this main story and all it’s tie-ins. There’s a connected tapestry here where all the different creators were on the same page that we sadly don’t get much of anymore. 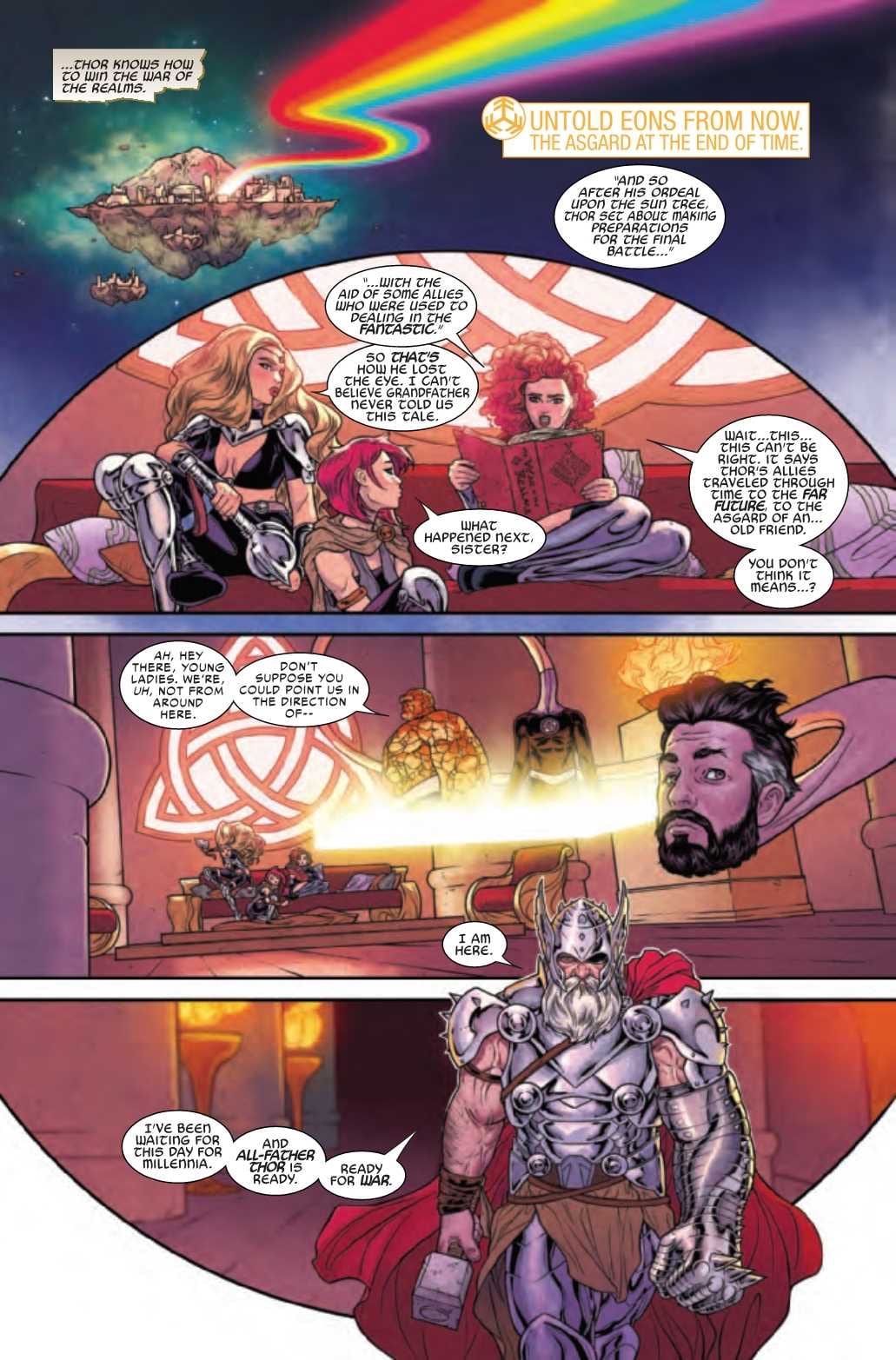 Russel Dauterman had quite a task with this series and he’s truly delivered. War Of The Realms was a much larger scale and cast than he’s ever been handed. There were very few blemishes. Every bit of epic that Jason Aaron provided for this story was taken to a new level through Dauterman’s talent.

The surprise of Mjolnir being forged is a wonderful moment. Thor’s trusty hammer sidekick gets a beautiful redesign and the scene in which it drops is effectively heavy as the hammer itself. We get major closure on “Gorr was right” and Thor becomes the God Of The Unworthy–a brilliant development by Jason Aaron.

As All-Father looks on in awe of how great a god his younger self was, the reader witnesses another step in Aaron’s grand evolution for the character. Along with all that Aaron has accomplished with this cast of characters and all these stories, he’s solidified himself as an all-time great Thor creator.

Matthew Wilson’s layering and contrast of colors really elevate Dauterman’s art. Battle scenes come to life through Wilson’s color. Laufey’s last stand is a masterpiece. Bloodier moments, like Carol’s fire-sword decapitation, burn right into your memory thanks to the vibrant and imperative statement the coloring and contrast provides.

Character iterations exclusive to this War Of The Realms story are iconic and memorable thanks to Dauterman and Wilson. We will forever remember Daredevil The God Of Fear and Malekith merged with the Knull symbiote. These are the kinds of things we read comic book events for. 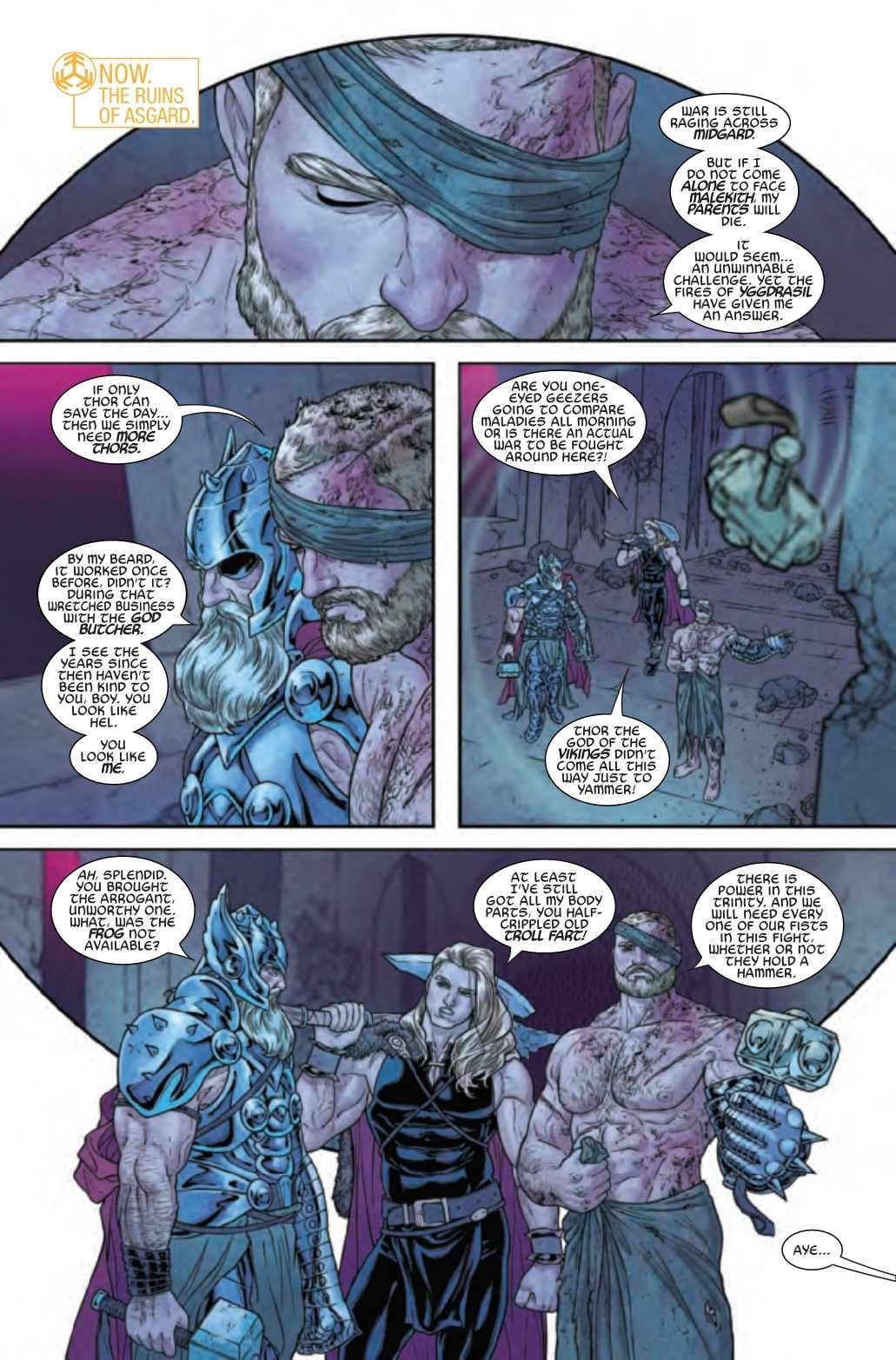 One major strength of War Of The Realms as a whole is the moments it provides–issue #6 is no different. Even moments that we can see coming from a mile away, like Loki’s return, are still every bit as entertaining as they’re intended.

Malekith’s final farewell is a bloody and brutal one. One would hope this isn’t the last we see of him as he’s clearly Thor’s become Thor’s greatest foe. He’ll likely spend some well earned time on the shelf.

The crawl out from the fallout begins, full of exciting new directions for the major players. That final page is a big one, Odin bowing to his son as the new All-Father Thor is absolutely stunning. We are officially in a new era for both Thor and the Marvel Universe.

War Of The Realms is everything a crossover should be. Marvel Comics are going to be in a good place so long as Jason Aaron is heavily involved.