The X-Men had forgotten Emma Frost ever existed, but no longer. Scott and his fellow mutants go to confront his former lover in UNCANNY X-MEN #21. 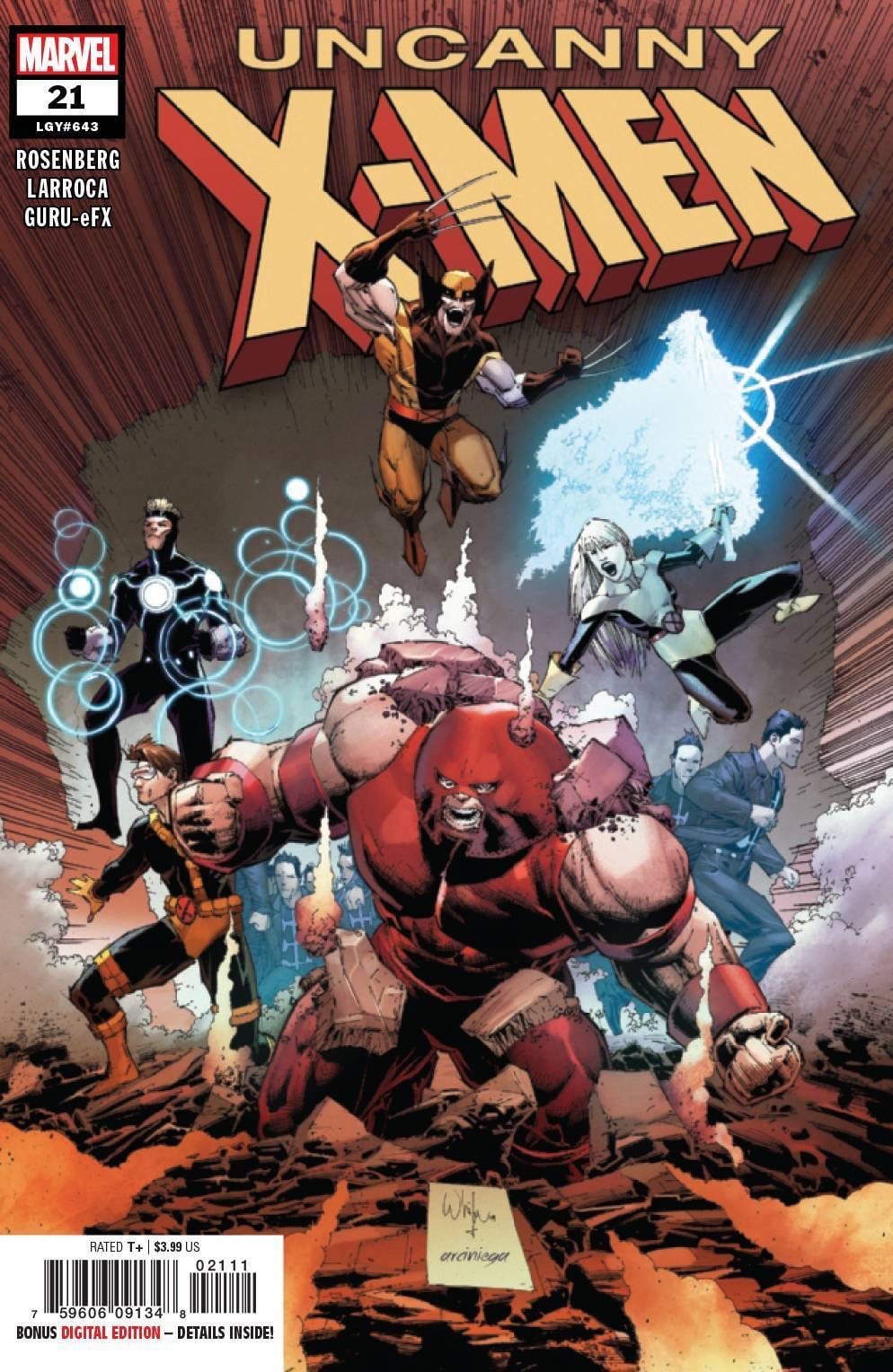 With Age Of X-Man still going on, the mutants that weren’t taken away to Nate Grey’s utopia are left in a very confusing world. With their allies and species seemingly vanished, it’s a big deal when they discover a major player like Emma Frost is still on the board.

Our subplot shows us the darker underbelly of what goes on when the X-Men are no longer around. Anti-mutant organization O.N.E. is putting a handful of mutants through horrifying experiences. Luckily they make the classic mistake of bring a wounded Wolverine behind enemy lines.

Writer Matthew Rosenberg has been doing a wonderful job pushing a story forward with only so many mutants to work with. Luckily for him (and us) he gets the cream of the crop. Rosenberg was tasked with handling the return of Cyclops and Wolverine while the rest of the X-Men leaders are off in the Age Of X-Man event.

It’s great to see Larroca doing this series after his long and controversial tenure on Star Wars. Away goes the photo-reference style and out come these explosive and emotionally charged pages.

Larroca’s style is a great fit for X-Men, he’s more than capable of providing a diverse cast where everyone feels very much their own. All the powers and abilities are on display in spectacular fashion.

That one overlapping panel where the X-Men arrive and see Wolverine causing chaos is particularly glorious.

One irritating feature of this issue, and story for that matter, is how handicapped Juggernaut seems to be. When confronted with unbeatable odds and a giant foe, why isn’t Ol’ Juggs the one rushing in headfirst to dispose of these enemies? There are too many panels of him just standing idly by.

Juggernaut is finally incorporated into the action once Ilyana’s mutant ability is neutralized. Once the demon takes over, she quickly removes the Gem Of Cyttorak and disposes of Cain Marko. The sequence is extremely entertaining and beautifully illustrated.

The page of action-panel breakdowns at the end of the issue is another art highlight. Our cliffhanger ending shows Emma (with a scar from what I assume is the O.N.E. device being removed from her head) having erased the entire world’s memories of the existence of mutants altogether.

Emma Frost continues to go through and interesting development with Matthew Rosenberg behind the wheel. She’s not entirely a villain, but she’s definitely operating in a grey area rather than being straight-up heroic. Ms. Frost is playing by her own rules, which puts her and Scott’s relationship in an interesting place to go forward with.

Rosenberg has crafted a clever story with the development of Emma Frost at the heart of it. Fans had reason to worry after her last appearance at the end of IvX, but we’re now back on track.

All-in-all, Uncanny X-Men #21 is another solid issue. The only blemishes are very minor and it carries the story forward in an exciting direction. Matthew Rosenberg and Salvador Larroca deliver a perfectly palatable X-Men story focusing on heroes we’ve missed for quite some time.

Rosenberg and Larroca deliver fans a satisfying return for the two most prominent X-Men of all-time.UNCANNY X-MEN #21 - Black Queen Operates In Grey Area