IDW’s Teenage Mutant Ninja Turtles #100 fulfills the markers for a great comic. The culmination of years of plot lines? Yup. Big emotional hits? Check. A massive battle that defines the word EPIC? Absolutely. But it’s more than that. The book has a sense of its bigness. It feels important.

There’s a weariness about the story, the final piece of the City at War arc. It has that vibe you get in the final act of a blockbuster action movie; the heroes are against the wall. Not everyone is going to make it, but they’ll never stop fighting. There will be laughs and tears and blood, but the battle is glorious, and our noble warriors do the right thing.

In case you need to be brought up to speed, Karai has taken control of the Foot Clan after defeating Splinter on the heels of Old Hob setting off a mutagen bomb in New York City (Sidebar: At this point, don’t NYCers kind of deserve it if they refuse to move after decades of metahuman shenanigans?). Meanwhile, Katsune is resurrecting the Dragon, who happens to be her dad. 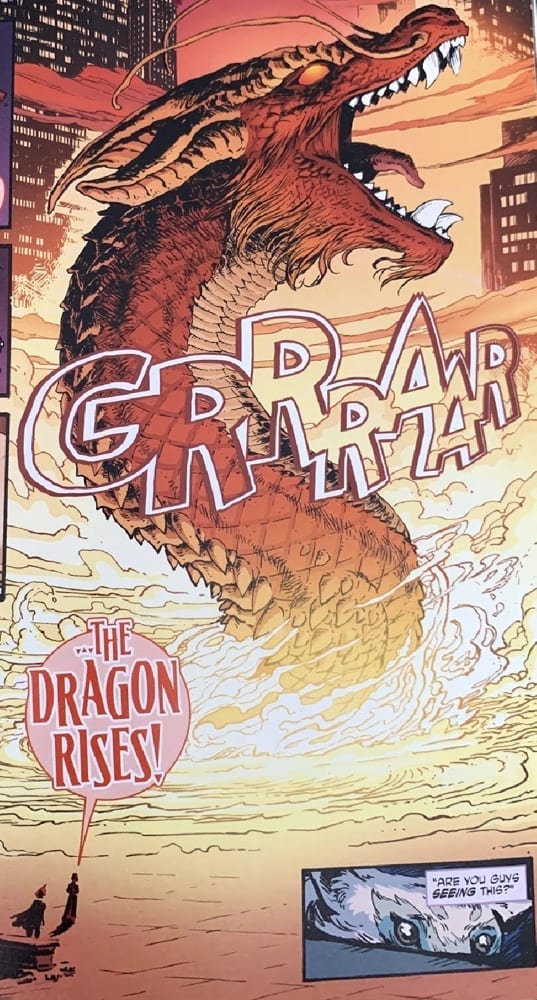 (This, kids, is what happens when Dad gets too many ties for Father’s Day…)

Beyond the well-hyped (and deservedly so) previews screaming that nothing in the Turtleverse will be the same again, what makes it so are the personal moments. Raph’s painful confession to Leo on the heels of his berserker rage while battling Bishop makes the story a human one. It reminds the reader of the themes of TMNT throughout its history. Acceptance. Redemption. Trust. On the other end of the spectrum, this issue reminds us that people can do the right thing and still leave a disappointing void.

The other component of this book that qualifies it for greatness is story quality. I’m not a Turtles guy. Nothing against those who are, just not my deal. This is the first TMNT book I’ve ever read, and it kept me hanging off every page. Yes, had I followed them throughout their history, this book would be a massive payoff. For readers of my age, think Uncanny X-Men #200 or Secret Wars #12. But those readers were going to buy the product anyway. What this murderer’s row of creators has done is not only tie up years’ worth of storylines, but present it in a way that attracts new fans, making them want to backtrack through all the issues leading up to this one. 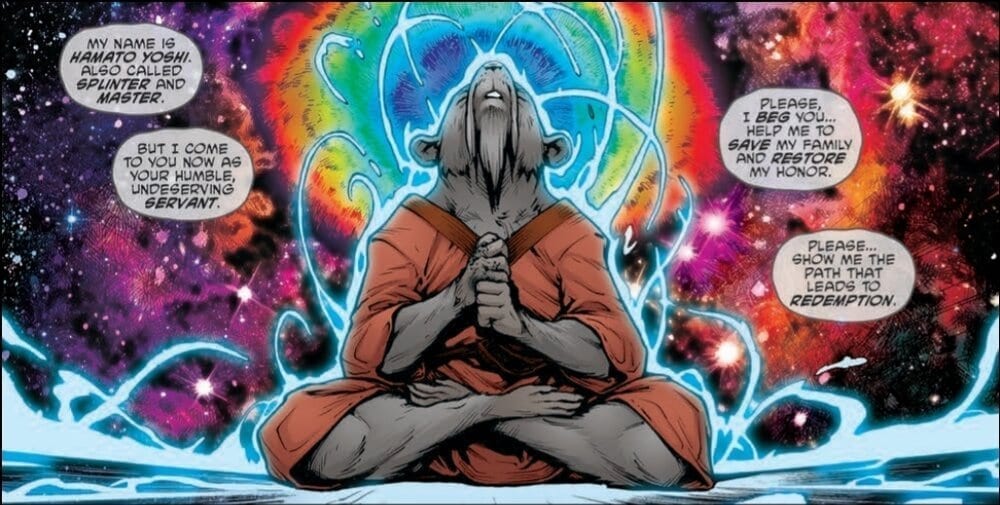 Kevin Eastman, Bobby Curnow, and Tom Waltz (with Waltz providing the script) imbued this story, from beginning to end, with love and respect for not just this arc, but the history of the book and its characters. Every aspect is firing on all eight, with the battle scenes mixed with comedic asides from B-Bop and Rock Steady and emotional depths interspersed with personal triumphs.

The art of Dave Wachter and Michael Dialynas is perfect. It combines the raw, indy feel that throws back to the books’ humble roots with the polish needed and deserved for a story this big. The buzz about this finale was not oversold. If you’ve invested any amount of time as a fan of TMNT, you understand this is a book that needed to radiate that kind of vibe. Rhonda Pattison’s colors work in concert with the pencils and inks to bring readers an emotional experience. Shawn Lee’s lettering is both solid and unobtrusive. It’s not sloppy, but not so overdone and embellished that it distracts from the overall piece.

If your only exposure to Teenage Mutant Ninja Turtles are the cartoons (or the toys, which are featured in the new season of Netflix’s “The Toys That Made Us” and brilliantly done) and you’re not sure why the four shellbacks have such a rabid following, read this book. And then read the other 99.

Did Teenage Mutant Ninja Turtles #100 live up to the hype? Let us know in the comments below.

Teenage Mutant Ninja Turtles #100 has been promoted as the one TMNT book you can't miss. Believe the hype.TMNT #100: Believe the Hype