Review: THE SWAMP THING #7 and the Burdens We Carry

The Swamp Thing is, ironically, one of DC Comics’ most human titles. Writer Ram V, artist Mike Perkins, colorist Mike Spicer, and letterer Aditya Bidikar use the big, green plant guy to talk about things that plague everyday people. The Swamp Thing #7 is all about the burdens we carry and the scars of our past.

V’s writing in this issue is rhythmic and poetic. He interlaces scenes of the Suicide Squad hunting Swamp Thing with scenes of Levi Kamei visiting the Kaziranga Forest in the past. V subtly coaxes deeper messages out of his story. As Levi is talking with his father, he is told an old Indian folk tale. It seems to have nothing to do with the rest of the plot and his father walks on, disappointed that Levi got nothing out of it. But later, the pieces all fit. V brings the story back in as the issue closes, and hands us the key to understanding it. It’s a satisfying way of tying the whole issue together and V does it brilliantly. 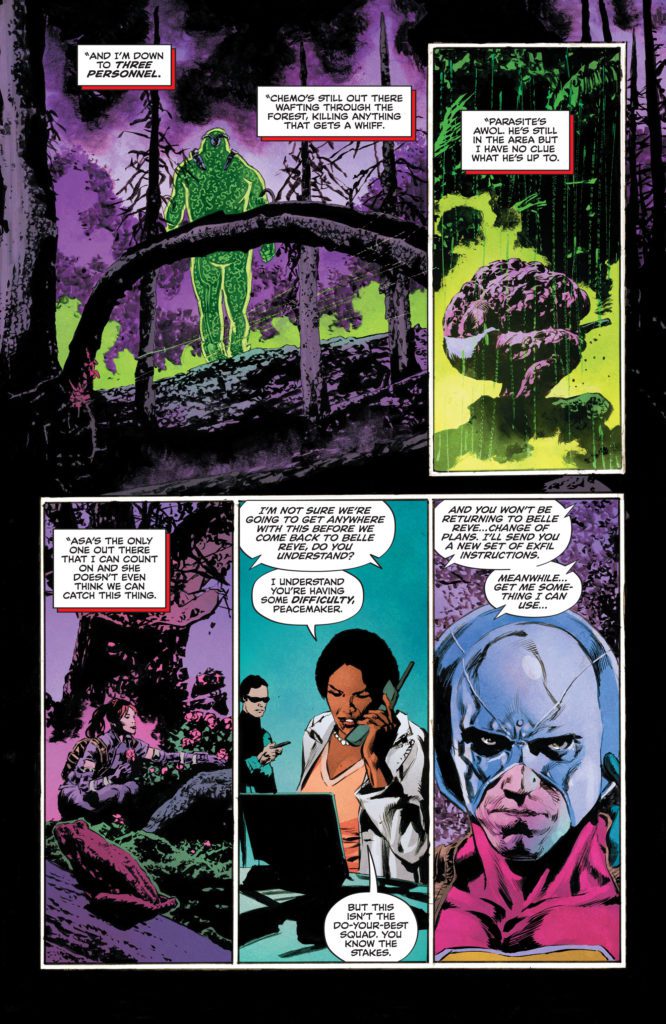 Perkins’ art is stunning as usual. But in this issue, his ability to characterize the Swamp Thing is really on display. When we first see Swamp Thing, he’s lumbering through the woods. His silhouette looks like something out of a Boris Karloff monster movie. But, later in the issue, Perkins focuses us in on Swamp Thing’s expressions. He’s human. We can see the fear, joy and love, written on his face.

Perkins’ depictions of Kaziranga and Levi’s time at home feels like something out of a storybook. Each scene is picturesque and beautiful. When Levi’s father tells the Indian folk tale, Perkins places two images in between the panels, drawn in the same style as a lot of Hindi art. It adds the subtle touch of India to the page, reminding us how much this series ties back to Levi’s homeland.

Spicer’s coloring helps the reader place where each scene is occurring. The modern day scenes, of Swamp Thing being hunted through the woods, are show in dark purples and neon greens. We can practically see the glow of Chemo coming to kill Swamp Thing. The scenes of Levi’s trip home to India are shown in a warm color palette. But as Levi’s memories turn darker, the color palette shifts too. We see some of the purple of Levi’s present start to mix in with the warm orange of his past. Spicer shows us how Levi’s memories are souring on him. They aren’t the warm, cozy memories of home he wishes they were. 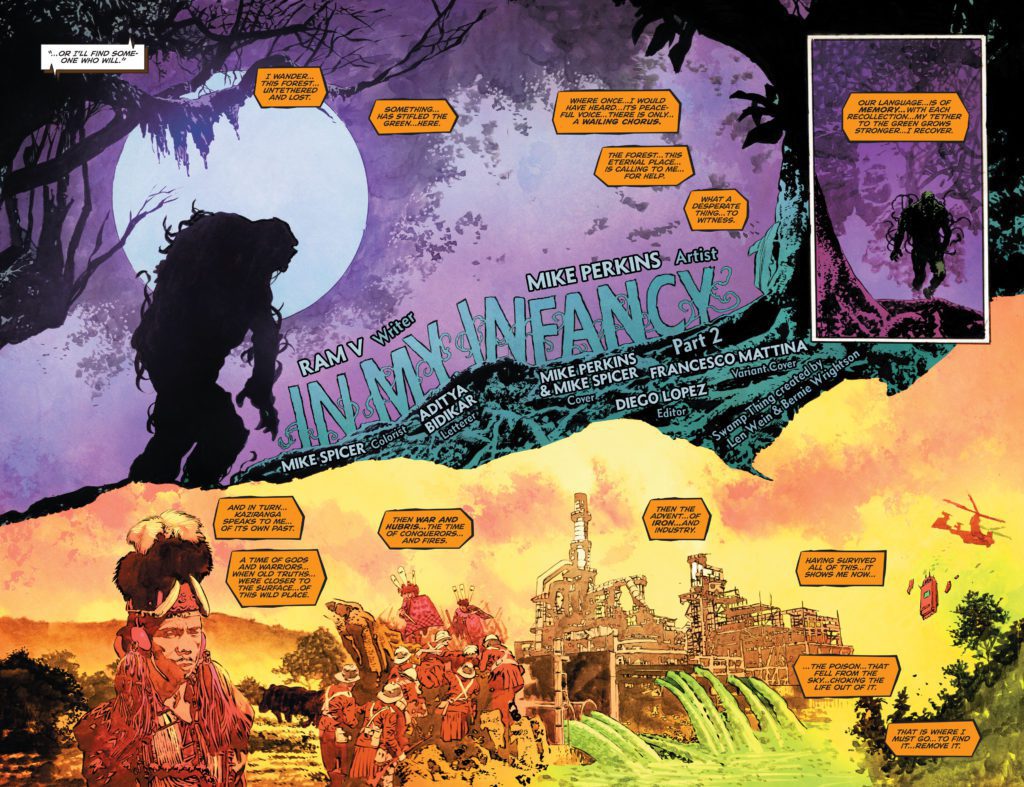 Bidikar’s lettering is full of surprises. Every sound leaps off the page. From the “AAAGH!” of Swamp Thing being attacked, shown in rough orange and black lettering, to the almost invisible “RRRMMMBLL” of Chemo approaching. But one really interesting moment in the lettering happens in Swamp Thing/Levi’s caption boxes. At first, they show up as the rough orange and black lettering. It’s just like Swamp Thing’s dialogue. But as Swamp Thing thinks back to his visit to India, the captions change. They become a light green color with neat lettering. It’s as though Swamp Thing is reconnecting with his humanity. He’s forgetting that he’s a monster and just thinking about what it’s like to be Levi.

DC Comics’ The Swamp Thing is a beautiful series, intent on being bravely human. This creative team uses this big, green monster to help us examine our own burdens and scars. Yet, they’re never preachy or heavy-handed. Everything is done with subtlety and finesse. Pick up The Swamp Thing #7, out from DC Comics September 7th, at a comic shop near you!

DC Comics' THE SWAMP THING is a beautiful series, intent on being bravely human. This creative team uses this big, green monster to help us examine our own burdens and scars. Yet, they're never preachy or heavy-handed. Everything is done with subtlety and finesse.Review: THE SWAMP THING #7 and the Burdens We Carry