Review: The Future Starts Now In THE NEXT BATMAN#1

The Batman of Tomorrow is here today!

Back in October of 2020, we were first given a peek into the future of the DC Universe. Future State gives writers a chance to explore new characters while taking up the mantles of iconic heroes. Along with that, it expands on potential stories for fan-favorite characters in this new world. The first of these Future State issues sees The Next Batman after Bruce Wayne. While this is not the first time we’ve seen a futuristic Batman, I’ve personally been excited to explore this new Gotham and its heroes. So what does the Bat-family of Tomorrow have in store for the readers of today? In the future, there is a new form of law enforcement in Gotham known as The Magistrate. They send out peacekeepers, which the new Batman has to contend with due to their more violent ways. We focus on the Fox family, with Luke helping out his mom, working on case laws during the day. He visits his comatose sister, Tamara, and comes face to face with his brother, Tim, going by Jace. The pair don’t see eye to eye since the latter went awol from army training. That said, it becomes more and more clear they are working to protect their city. 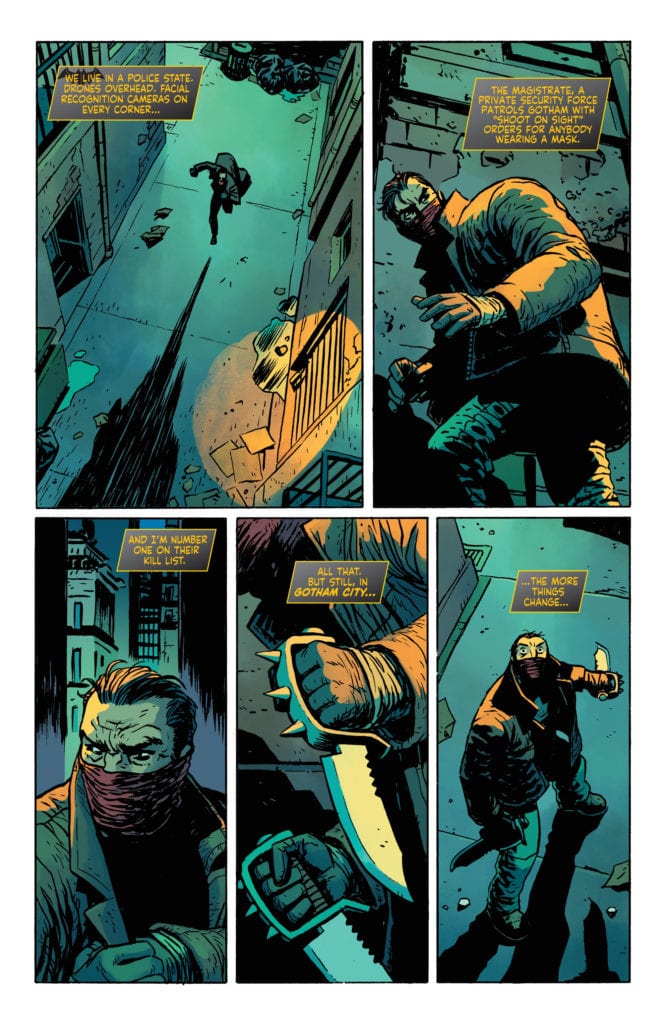 We also get two other stories involving the Outsiders and the Arkham Knight. The Outsiders follow Katana, now in sweet samurai armor, taking on Kaliber while protecting Duke Thomas’ pursuit of getting people out of Gotham. During one of her missions, Tatsu meets up with Black Lightning, now a lightning elemental, who has come to warn her that The Magistrate is setting Duke up to fail. The Arkham Knight, in contrast to the Outsiders leaving town, is leading a battle against the new order of Gotham. Using volunteers from Arkham, Astrid leads the battle against The Magistrate and their peacekeepers.

This issue is less about Batman and the other heroes of this new age and more about shaping this futuristic Gotham. That isn’t to say this is a bad thing. If anything, it sets the scene extremely well. We still get cool sequences of action, such as Tatsu hunting down Kaliber in an amazing two-page spread, and wonderful character moments, such as Astrid playing psychiatrist to one of her soldiers. 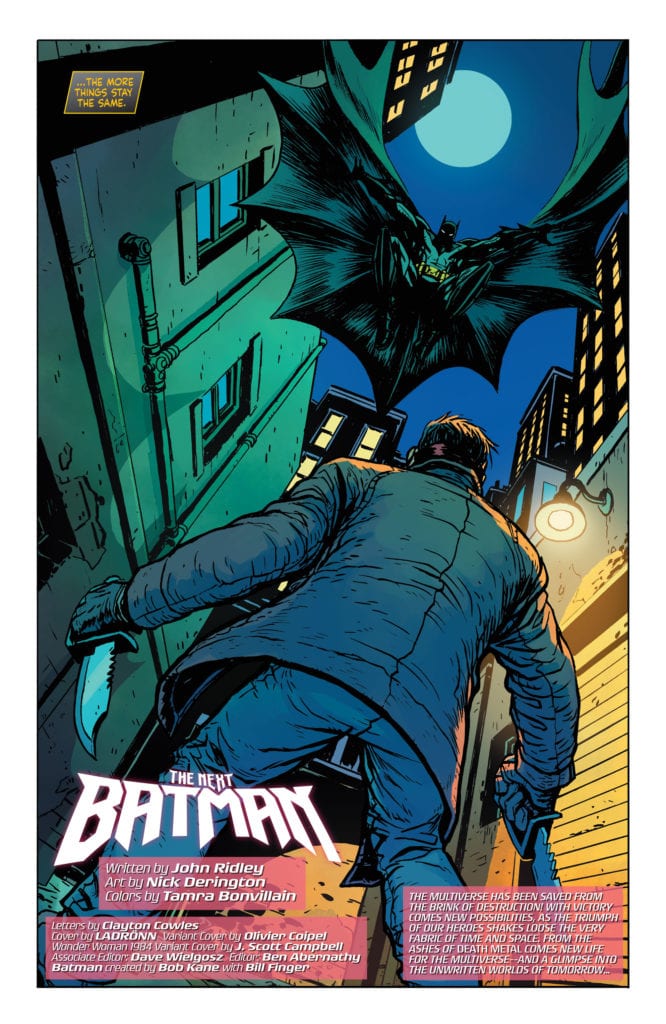 However, the best moments come from the main story, as we get to know our new Batman. While we don’t get too much action from him, we see him offering misguided kids a chance to go straight rather than leave them beaten down or taken down by the Magistrate. This new Dark Knight can be tough yet still be a hero. As the issues go on, and the rest of the world gets filled in with the other Batman book and Justice League titles, we’ll learn more about who he is. From this first issue, though, it’s already turning out to be promising.

The art teams do a fantastic job in crafting this world in their stories. Nick Derington covers The Next Batman, providing that style he mastered in Batman: Universe with Gotham gangs and our new Dark Knight. Jack Herbert worked on the Arkham Knights story, and while his style doesn’t quite match with Derington’s more cartoonish style, he is able to make the Arkham Knight and her fellow fighters look amazing, leaving us with a final page that could be made into a movie poster. However, Sumit Kumar provides one kick-ass, two-page spread in The Outsiders, showing Katana at her best cutting through foes to find her target. I truly hope these teams stick around for their stories because I really can’t imagine anyone different. 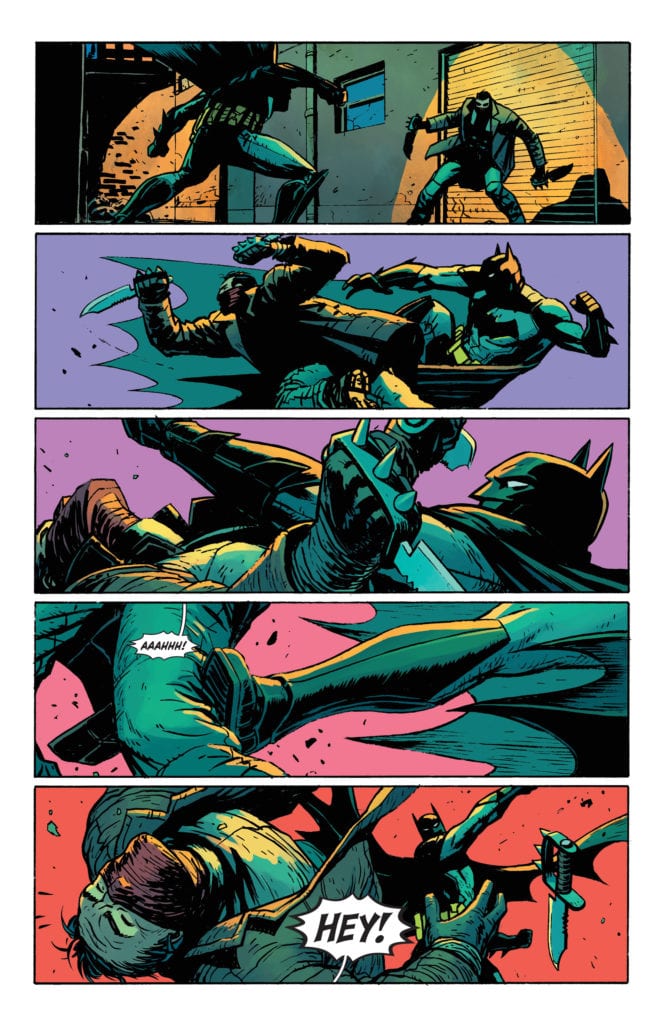 Overall, this first issue into the world of Future State’s Gotham was pretty good. With fantastic art across the board, we got three stories that provide the context of what the city has become. The Outsiders showed heroes doing their duty to get people away from the Magistrate, Arkham Knights showed the active fight against them, and The Next Batman is that middle ground of just protecting the people. It was nice to get these perspectives. The only complaint I really have is that the main story’s slow-burn can be a little dull when you expect action. That said, we still have more issues coming, and this reviewer can’t wait to pick up the next issue.

The Next Batman provides not only a look into the Dark Knight's successor but the future of Gotham in three intriguing tales.Review: The Future Starts Now In THE NEXT BATMAN#1