Review: Barry Teams Up With the Sage Force Avatar in THE FLASH #62

The Flash goes Undercover with the newest Force User!

The Flash has spent the past few weeks on a quest to find fellow Force users. The first he has found is the heroine, Fuerza, in Corto Maltese. The pair learns from each other, but things take a turn when they’re attacked by a corrupt police captain. Fuerza, who has been fighting his corruption for months now, wishes to kill him. The Flash, ever the hero, stops her. This causes her to turn her back on him, sending Barry off to his next location. Flash and Iris find themselves in Zandia, a nation run by criminals, to find the wielder of the Sage Force. Turns out the wielder, Psych, is a big fan of the Scarlet Speedster! Will this user become an ally to the Flash?

After meeting each other, Psych explains to Flash what he’s doing. The kingpin known as Roulette has illegal casinos all over the world, amassing in a gambling empire. Psych, an agent of ARGUS, has been sent in to stop her. With his subsequent control of the Supervillains, Iris has a few doubts, but Psych explains his origin. This is enough to get Flash on his side, and the trio sneaks into Roulette’s gambling hall. As the plan begins to get underway, Psych believes they need a distraction. This distraction involves him exposing the fastest man alive to this small nation of criminals. 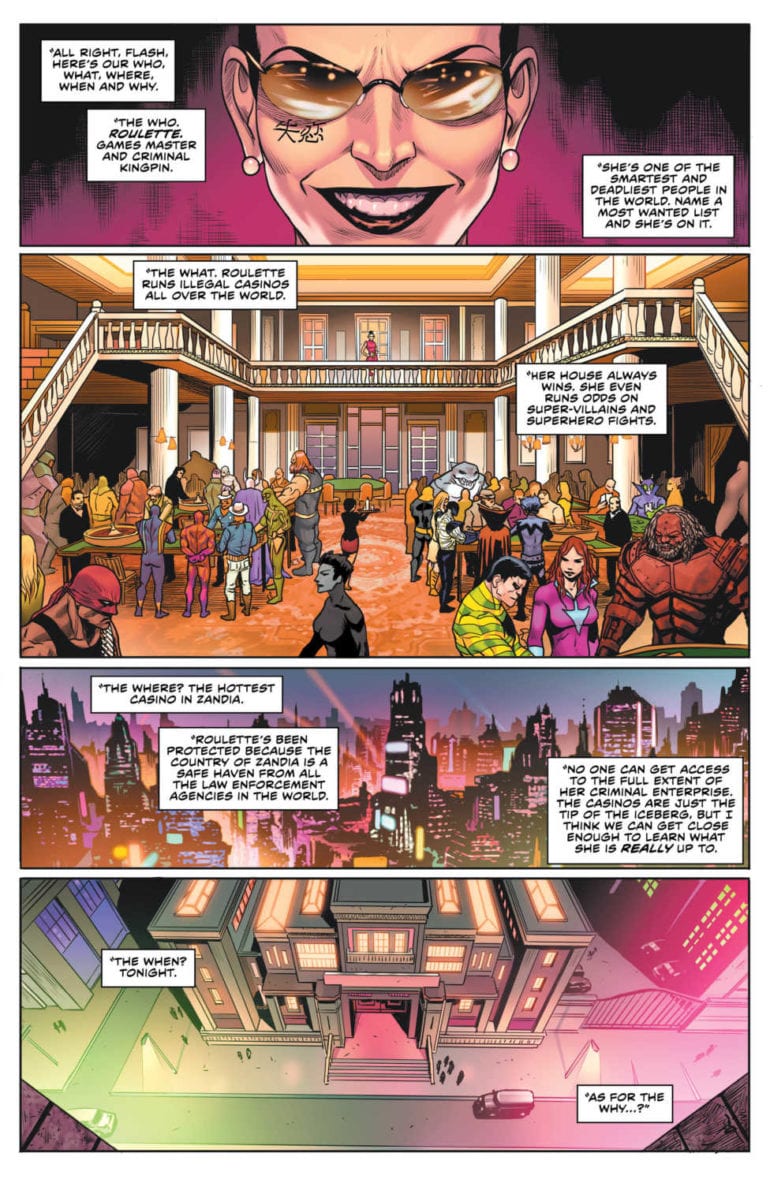 I am on the fence about our new Force user. While his design and use of powers are cool, we already had an antihero Force user. He does take a turn for the more evil side in the middle, but some variety would be better. I’m not saying have him be either full out hero or villain, but maybe someone still fresh in the game.

I do like the setting the story takes place in. It puts Flash in an element we don’t usually see him in. Most stories, he’s in Central City, where he can run fast a free. This one, however, he has to play the stealth card to survive. I was at the edge of my seat as Flash and Psych snuck into Roulette’s hall. It felt like a spy movie, right down to fighting their way out. It’s an enjoyable issue with a cliffhanger that leaves me clamoring for the next. 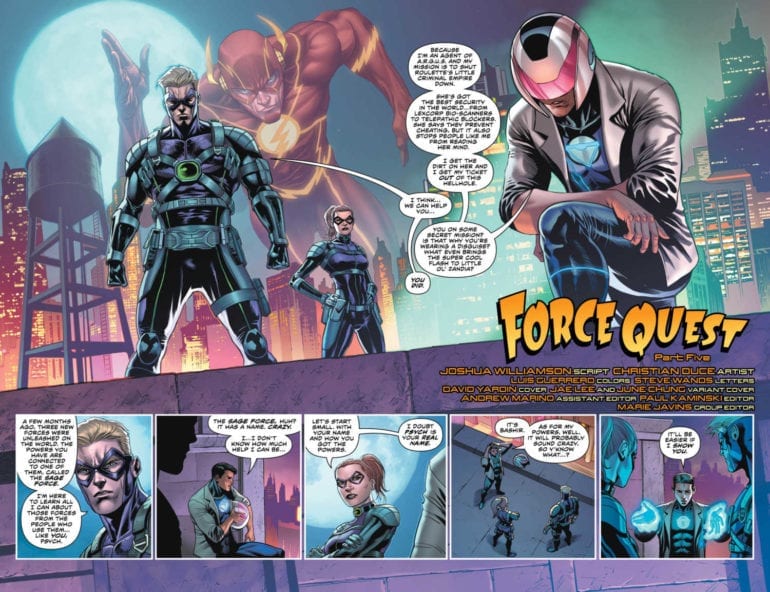 The illustrations of Christian Duce have grown on me throughout this story, and it hit it’s peak this issue. The characters and action haven’t looked better, with the throwdown at the Casino being the highlight. The only thing that makes this art better is the fantastic colorwork of  Luis Guerrero. He’s able to find a balance between vibrant and subdued to keep the world exciting yet realistic. It’s an excellent pairing for a good arc, what else can I say? 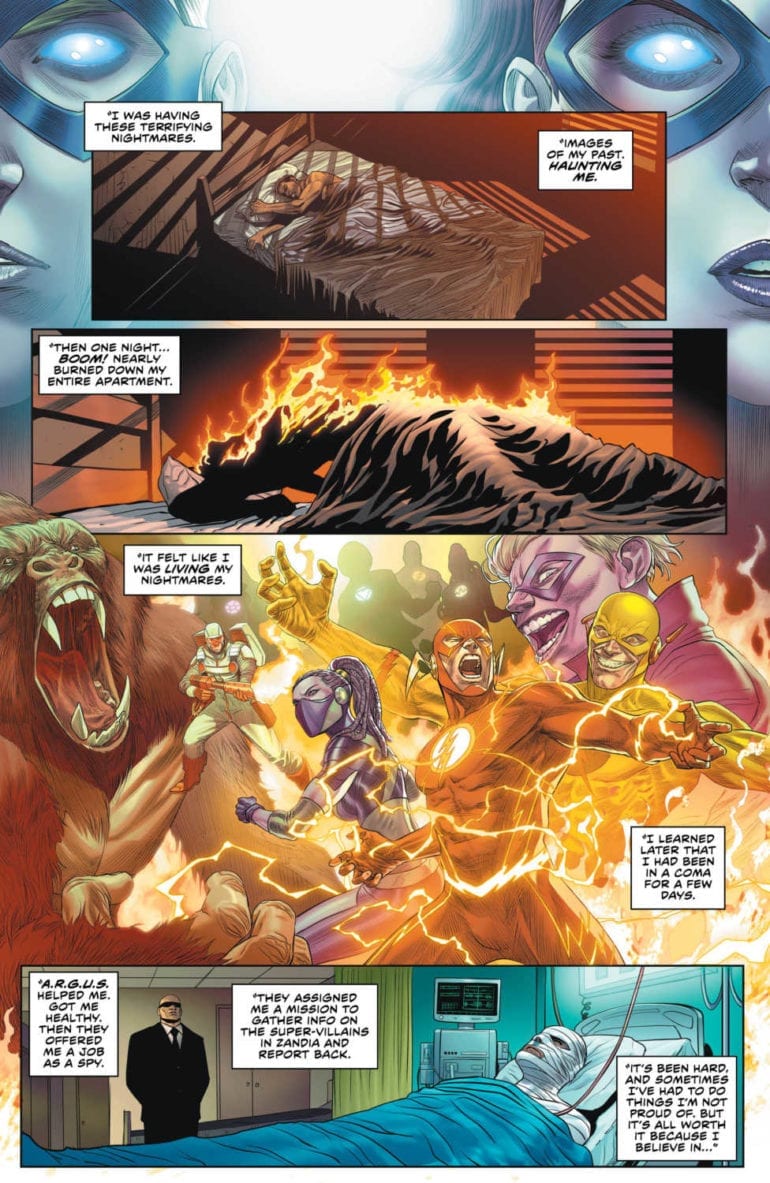 While I might not be a fan of our new Force User, this was still another fun chapter of The Flash. The action in the criminal nation kept me on the edge of my seat, and the cliffhanger has me counting the days until the next issue. The art is very well done and has finally found its stride for the Force Quest. If you’re a fan of the Flash or heist stories, you might want to take a look at this one.

Review: Barry Teams Up With the Sage Force Avatar in THE FLASH #62The Flash teams up with Psych for a fun casino heist!