TALES FROM THE DARK MULTIVERSE: INFINITE CRISIS Doesn’t Even Believe Its Own Premise

Tales from the Dark Multiverse: Infinite Crisis, written by James Tynion IV, with pencils by Aaron Lopresti, inks by Matt Ryan, colors by Romulo Fajardo Jr and letters by Rob Leigh is a great juxtaposition to the subtle and complex comic that was Infinite Crisis. While the art is beautiful and reminiscent of the original Infinite Crisis series, the writing gives no space for the art to shine nor does it succeed in providing a believable premise.

In fact, Tynion IV doesn’t seem to believe his own premise. The writing is so heavily over-explanatory it’s almost as though Tynion IV is convincing himself that this plot works, page after page. It doesn’t. Perhaps there is a world where it is believable that Ted Kord, Blue Beetle, would become villainous and murderous under pressure, but Tynion IV’s version of events creates no motive for this transformation and requires nearly all of the characters to act very uncharacteristically to make it work. Maxwell Lord is gullible and uncareful, Beetle is hot-headed and ego-driven, and Alexander Luthor’s brief appearance shows him to be forgettable and rash. Every page is so covered in captions and speech bubbles, piecing together things so that the readers have no chance to realize that the pieces don’t fit. The best part of the writing is lifted straight from the pages of 2005’s Countdown to Infinite Crisis, reminding readers that this comic is riffing on a brilliant work in the past, and not filling those shoes. 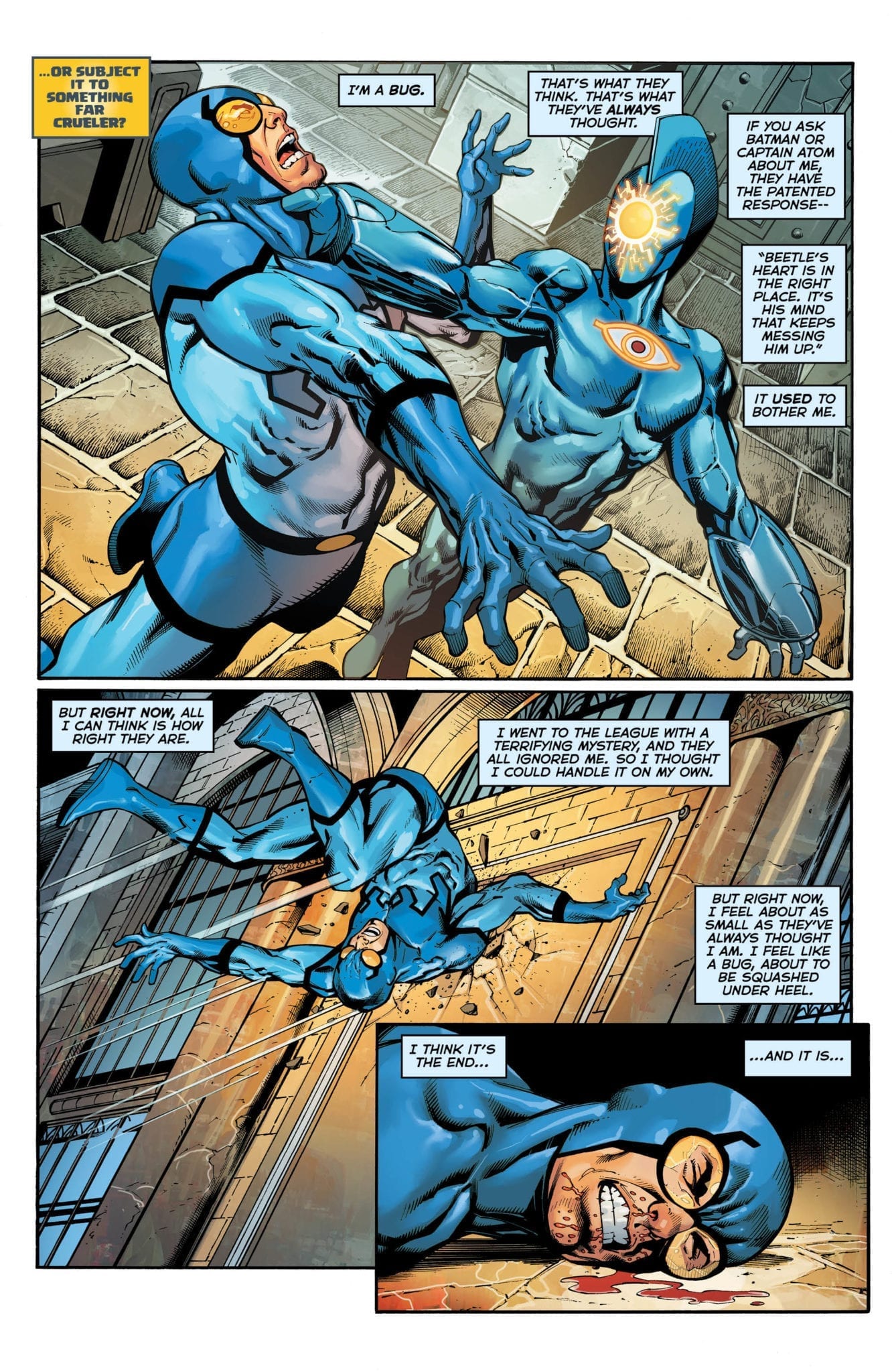 The pencils and inks by Lopresti and Ryan somehow manage to balance homage and originality. Their art is reminiscent of Rags Morales’ work on Countdown to Infinite Crisis in such a way that nostalgically sets the tone, yet they also add in a layer of darkness and expression that is truly their own. It’s a shame that so much of the writing commandeers the art, because the issue is rife with what could have been beautiful silent moments. In a brief silence after a fight between Beetle and Booster Gold, we merely see their faces. Booster’s disappointment and pain plays out on his face so beautifully against his anger. Beetle’s apathy, even obscured by shadow, speaks more than most of the pages combined. The many close-ups on the faces of the characters that Lopresti and Ryan keep bringing us back to show the duo’s incredible grasp of human emotion and succeed in grounding the art in raw moments between quips.

Fajardo Jr’s coloring similarly balances originality with homage. Fajardo Jr mimics colorscapes of other comics’ series when scenes from those comics are interlaced into the story. When characters from Villains United appear, the color palette shifts ever so slightly to a lighter tone, allowing us to call back to that vibrant arc. When characters from the JLI gather together, the colors are again brighter. We get a sense of the innocence of these characters and the warmth that they have despite their jokes and digs at one another. Much of the rest of the comic is cast in a dark hue. This is the Dark Multiverse after all. But it’s Fajardo’s juxtaposition with those light moments that gives the darker moments any punch. As events get darker, so do the colors, and we follow the trajectory of events through Fajardo’s gorgeous visual storytelling. 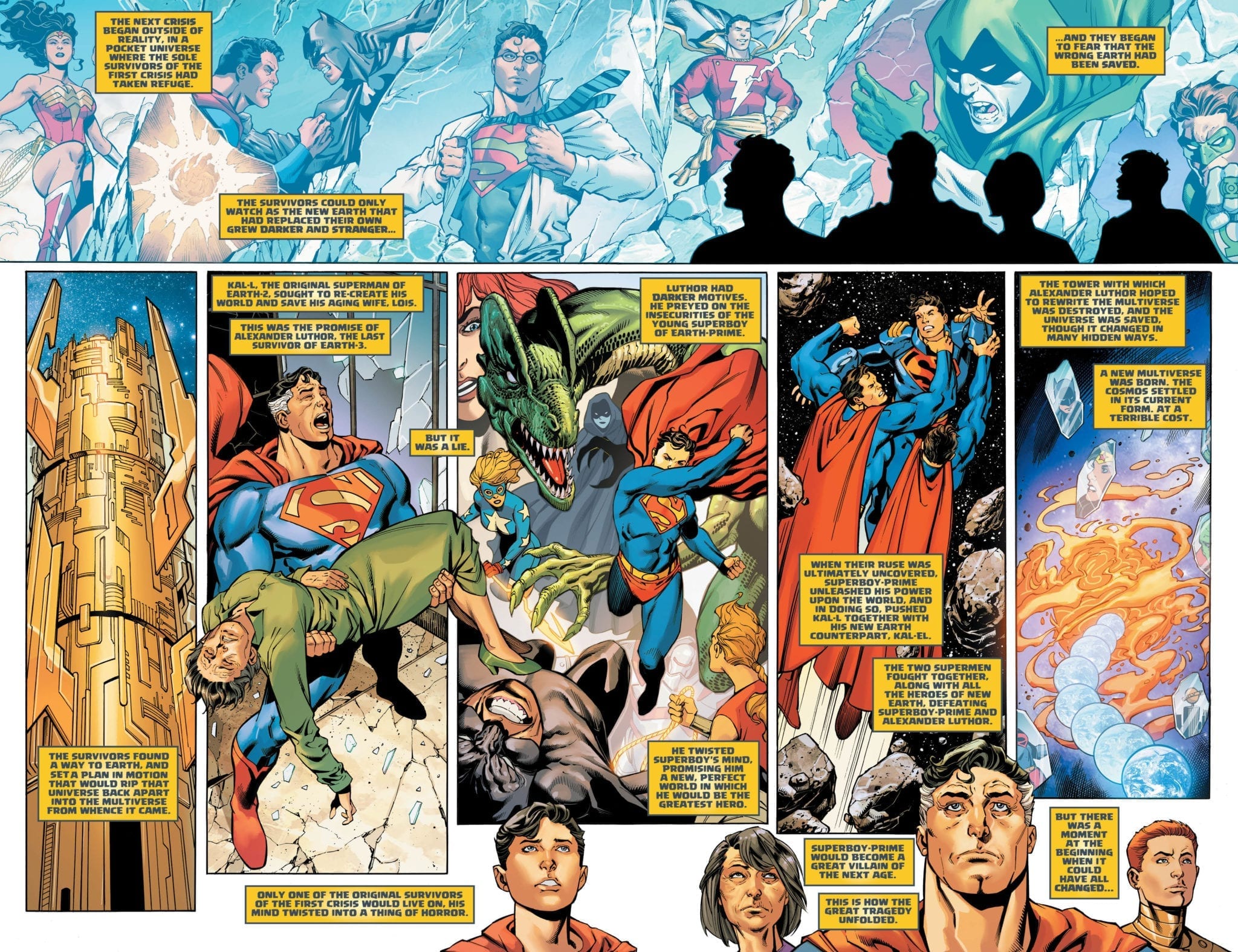 Leigh doesn’t particularly help the readability of the dialogue and captions. While Leigh really was working with an incredibly high word count, speech bubbles were not divided up to create any kind of pattern. Most of the speeches and captions were placed in daunting chunks that drew away from the rest of the visual experience. While Leigh’s letters were certainly readable and clear, the actual parcelling out of their contents felt uneven and difficult to swallow.

With gorgeous panels like these, it’s a shame that Tales from the Dark Multiverse: Infinite Crisis suffered so much from the writing. It allows for little room for readers to breathe between monologues and enjoy the brilliant expressions and colors that really speak for themselves. If you want to read a great version of Infinite Crisis, then your best bet would be to re-read Infinite Crisis.

Tales from the Dark Multiverse: Infinite Crisis, written by James Tynion IV, with pencils by Aaron Lopresti, inks by Matt Ryan, colors by Romulo Fajardo Jr and letters by Rob Leigh is a great juxtaposition to the subtle and complex comic that was Infinite Crisis....TALES FROM THE DARK MULTIVERSE: INFINITE CRISIS Doesn't Even Believe Its Own Premise