Suicide Squad #1, written by Tom Taylor, with art by Bruno Redondo, colors by Adriano Lucas and letters by Wes Abbott, is a promising beginning to a new era for the titular team. With the creative team behind Injustice on this, it’s clear this series will be no-holds-barred. The first issue does not disappoint.

Taylor’s writing manages to establish the characters without rushing into creating a “team dynamic.” Instead of trying to create a “rapport,” he lets the characters be driven together by circumstances. It’s also very clear that this is not the same team we’ve seen in many other iterations. Taylor has already established loads of new characters that look to be taking huge roles in the series. He’s wiping the board clean, creating the kind of reboot that means anything can happen. If his track record tells us anything, this is going to be a wild ride. 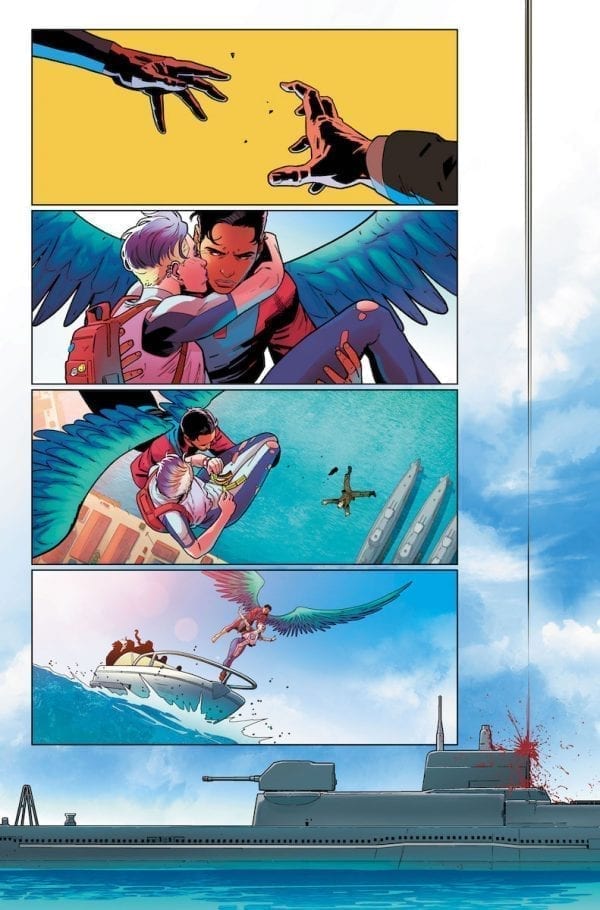 Redondo’s art is gorgeous. Throughout, he constantly shifts perspectives to give a sense of movement and chaos. When Magpie is being stalked down a dark hallway, he continually alternates how we see her. We sense her panic as we go from close up to zoom out, from behind her to in front of her. It’s like listening to her raised heartbeat. And when someone jumps out of the dark at her, their pupils are minuscule. It goes to show Redondo’s mastery that he can make a page fit for a horror comic in the pages of Suicide Squad.

Lucas’s colors help give even the most brutal moments a sense of levity. When one character’s skull explodes in another character’s hand, the neon yellow background offsets the gore. It almost has the feel of a Tarantino movie. Lucas is egging the reader on to find a kind of beauty in the violence. With all the bright yellows and reds surrounding each moment of explosive blood, it’s like watching a light show, not an execution. 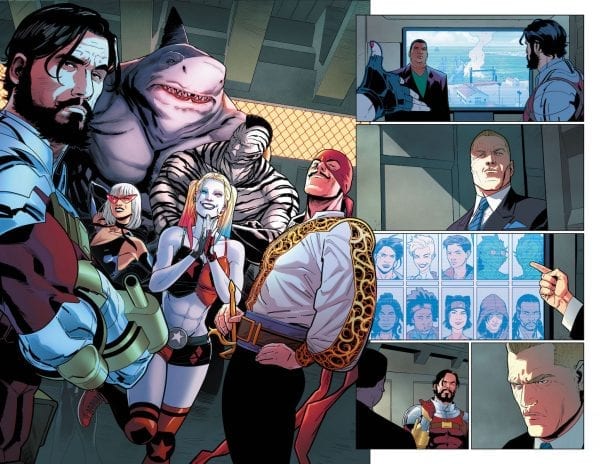 Abbott’s lettering is a huge player in what makes this comic so fun. Screams follow characters down to their deaths, and the lettering is constantly changed up. Even when writing various explosions, Abbott gives us the sense that a head and a ship blowing up make different noises. Abbott’s lettering is clear and precise and is evolving as the issue progresses. If he’s experimenting with lettering this much in issue 1, I can’t wait to see his work in issues to come.

Suicide Squad #1 is exactly the riot it should be. It’s undiluted fun that actively chooses not to hold back in each moment. Read this series while you still can, it’s bound to be changing drastically as each month goes by. Pick Suicide Squad #1 up at your local comic book store on Dec 18th.

Suicide Squad #1, written by Tom Taylor, with art by Bruno Redondo, colors by Adriano Lucas and letters by Wes Abbott, is a promising beginning to a new era for the titular team. With the creative team behind Injustice on this, it's clear this series will...SUICIDE SQUAD #1 Is Undiluted Fun