Writer Tom King and artist Mitch Gerads are back! This time, they’re working with artist Evan “Doc” Shaner. Or are they? The King and Gerads duo that has become known for gritty tales like Sheriff of Babylon or Mister Miracle bring their distortions and grime to Adam Strange in Strange Adventures #1. But King works with Shaner to tell a different story. A story of crisp lines and flawless heroes. The question inevitably becomes, who is Adam Strange really?

King crafts two opposing narratives in this brilliant first issue. In one tale, Adam Strange is on a book tour with his wife for his autobiography, also called Strange Adventures. He’s fought wars in outer space; he’s earned his retirement on Earth ten times over. Or at least that’s what he wants to believe. When Adam is accused of having committed atrocities on Rann, everything begins to fall apart. Alanna, Adam’s wife, defends him like a wolf backed into a corner. Adam, on the other hand, seems like he’s trying not to look resigned over the whole thing. Only putting the amount of effort necessary into proving his innocence that will get people off his back. 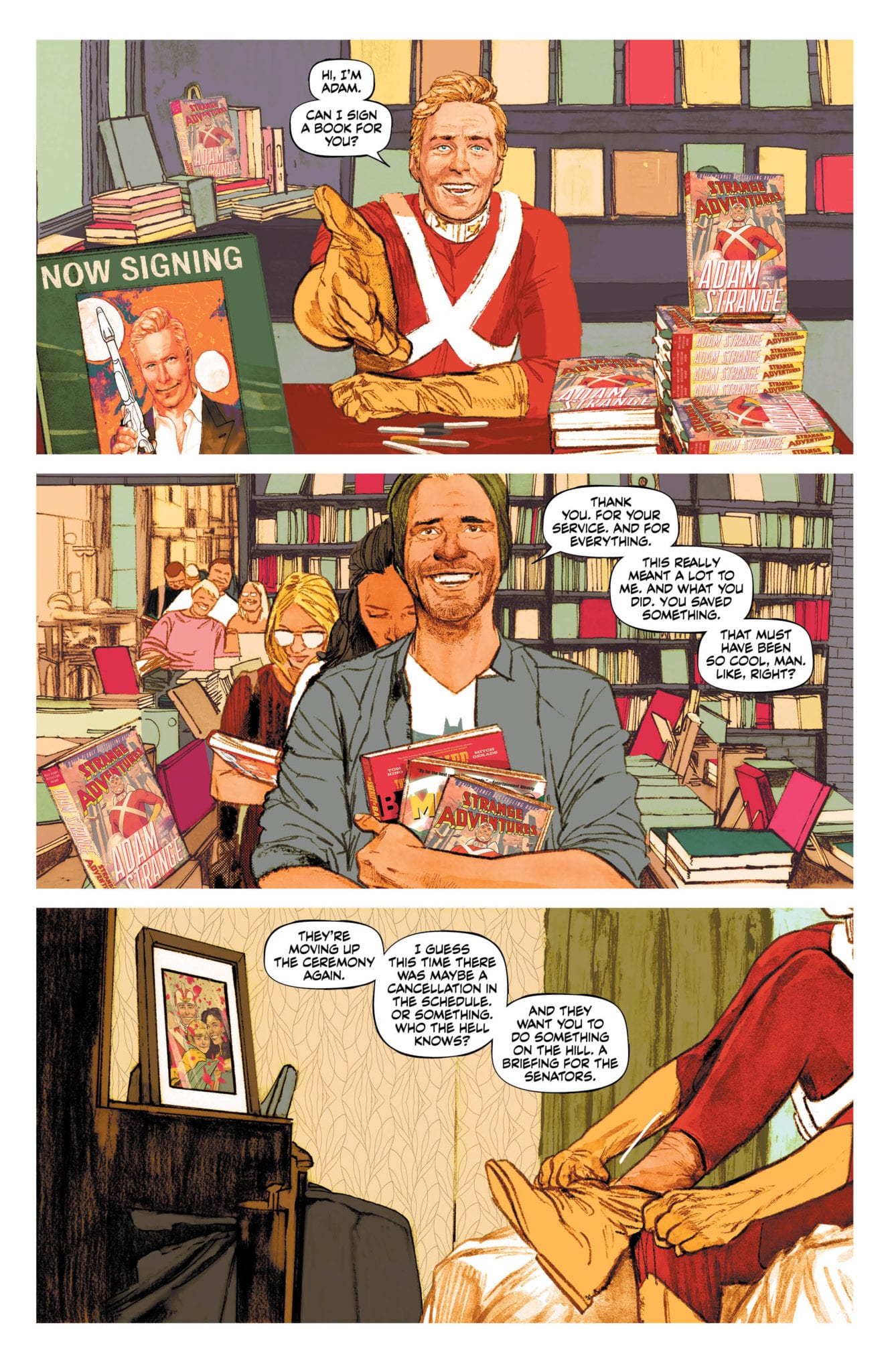 Gerads’ art gives us a slightly distorted view of a man trying to look like he gives a damn. This half of the issue is colored brightly in an almost artificial way. Insisting nothing is wrong. The first time we see Adam smile at a book signing, it seems genuine and kind. When Gerads recreates that smile for another signing later in the issue, and then another, and another, the sincerity fades. Adam Strange suddenly seems like the kind of man that can’t muster a genuine smile. Even when his innocence is questioned, he can’t quite set his jaw like Alanna. When we see him lying down on a bed in full uniform, we get the picture. He’s in a costume he doesn’t care for, living a life he’s too bored to fight for. He’d just rather be in bed. 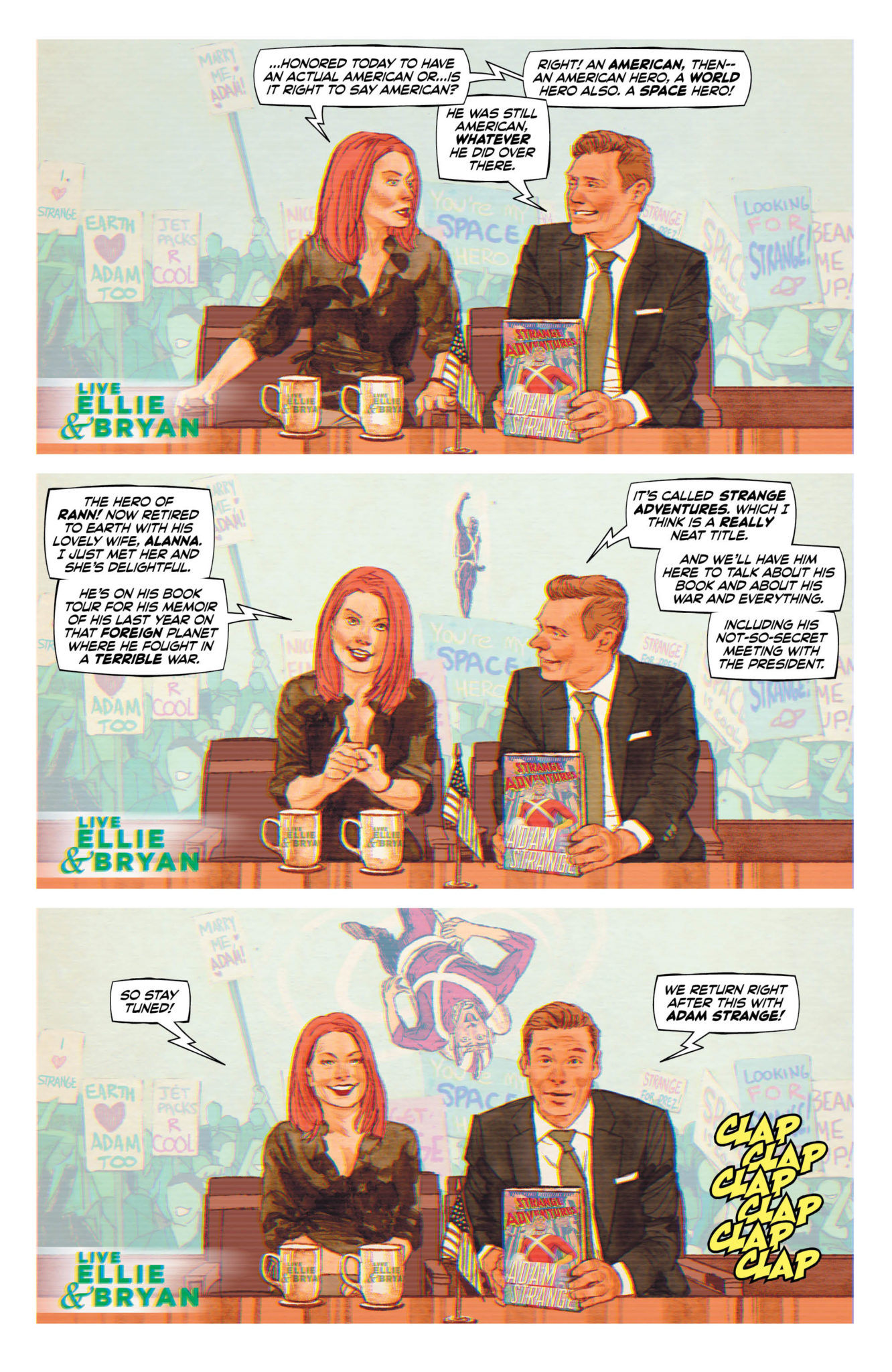 Clayton Cowles’ lettering for this narrative is minimal. We get three sound effects in this half of the issue, that’s all. The most noticeable of these is the sound of clapping on a morning show. Big and yellow, it draws attention in a way that the later sound effects don’t. Every other sound is pushed to the side or written in small letters. It gives us the impression that life through a screen is not as realistic as it may seem. Everything but that one moment feels as true to life as possible. Even the credits and end quote are made to look like they were written on a typewriter. It’s only on TV that lettering suddenly becomes larger than life. 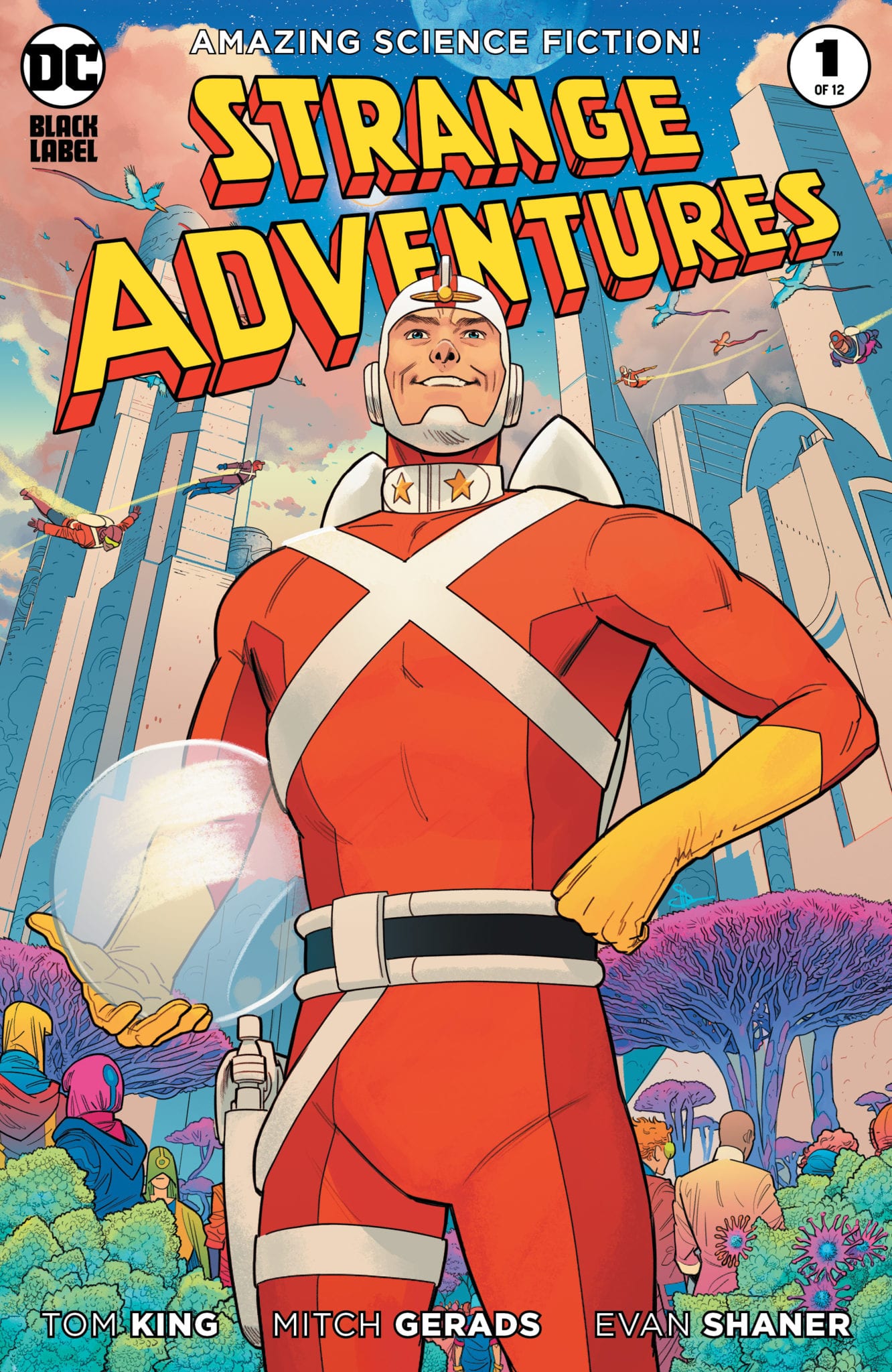 King tells the other half to this story in a voice that is unfamiliar. Rarely with King is something cut and dry. It’s the consequences and fallout of humanity that are his bread and butter. So it’s telling when every time Adam Strange shoots his laser gun, it hits someone off-panel. We never see the damage; we only see the smiling, adventurous hero. King echoes the writing of the Silver Age. Consequences have no home in these pages; the hero must always win. And he must win with honor and dignity. The chilling realization of the issue is that these are not necessarily events as they transpired, but what Adam Strange and Alanna are telling themselves. After all, it’s Shaner’s cover that appears in the issue as the cover to Strange’s autobiography. These are his version of events.

Shaner’s art similarly echoes the Silver Age of comics. But in the same way that Gerads’ brightness seems to be a facade, Shaner creates a false dark tone. It’s as though the hero is ever aware of the great odds he faces. He’s David, covered in the shadow of Goliath, so there is no reason to question his actions. The crisp lines and over-explanatory dialogue assure us we are in the quintessential comic book. Shaner’s art is the clean, perfect comic book world we’ve come to know and love. And with big spaceships and monsters, the problems are forever on the outside and our chin-dimpled hero is a light in the darkness. Though it’s clear from the tone of this book that Shaner’s art represents the lies Adam tells himself, it’s hard not to believe the lies too. Shaner tells them so well. 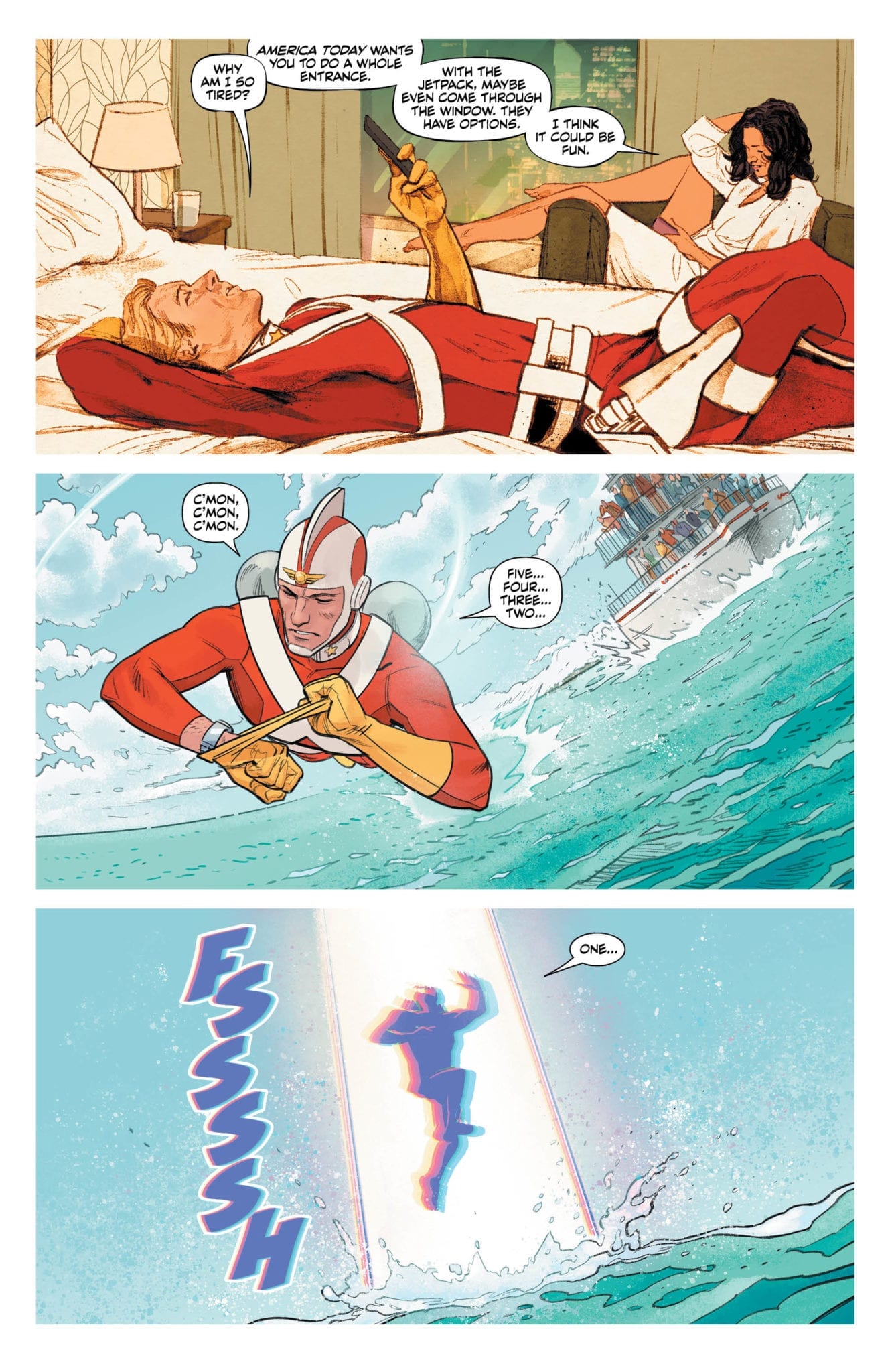 Cowles pulls out all stops in the Shaner half. He makes up for every moment he holds back in the Gerads’ pages. Large orange letters make the sound of an alien chomping down. Electric blue sound effects accompany Adam’s pistol and jetpack. Huge explosions splash across the page. It feels as though Cowles has been tasked with distracting us. We aren’t allowed to think about the inner turmoil, or perhaps lack thereof, so our gaze is constantly drawn outward. It’s a brilliant reminder of the fun of Silver Age comics, paired with a satire and commentary of those same works.

It feels like we know how this is going to end. The tone, the characters, the inciting incidents have already established a coming doom. It’s up to the creative team to make us care that these characters might be headed for the slaughterhouse. And in one issue, they seem to have already achieved it. Strange Adventures is the start of something brand new in comics. So new, I had to come up with new ways to review it. Don’t miss this brilliant series, starting March 4th with Strange Adventures #1 coming out in a comic shop near you!

STRANGE ADVENTURES #1 Gives Us Two Stories for the Price of OneEvery inch of every page has been carefully crafted by this amazing creative team. They tell a timely story of the nature of truth and the cost of lying to yourself.