From veritable comics auteur Jonathan Hickman (East Of West, X-Men) and artist Mike Huddleston (Butcher Baker, The Strain)comes a grandiose science-fiction epic in a compact package in Decorum. This 8-issue series recently concluded and will be collected in a deluxe hardcover this Spring. So the question becomes: is it worth your time and money? Why yes! After all, it’s Hickman! Albeit a bit of a slow start and a rushed finale, this comic makes up for minor shortcomings with a story that combines Hickman’s massively imaginative universe-building with his compelling and fun character writing. Featuring unbelievably dynamic art from Huddleston and outstanding design work, this mini-series is an absolute feat of comics creativity.

“There are many assassins in the known universe, this is the story of the most well-mannered one.” 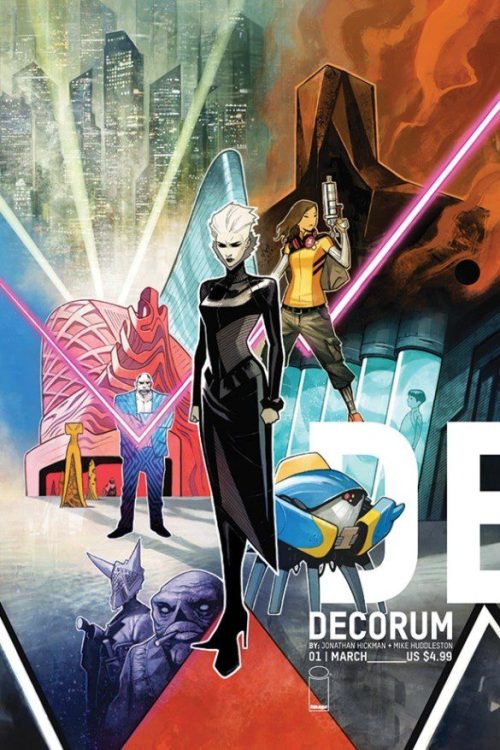 Writer Jonathan Hickman is no doubt best known for his sprawling, complex method of crafting science fiction universes. Decorum is no different. Hickman builds both character and world in “story then glossary page” format. Every issue is intercut with a page offering readouts of planetary statistics and general universe information. One writer described it as “all the stuff Hickman couldn’t write into a comic,” and I’m inclined to agree. Think the glossary and indexes in Hebert’s Dune, but presented visually. This is a classic Hickman-ism that you’ll either love or hate. These slices are compelling slices of info, and several of them are creatively and humorously delivered. If this isn’t your cup of tea though don’t worry, as the story itself is tight as well. Mostly.

Hickman’s story here begins with two separate plots. The first, and the most mysterious, involves a race of zealot-like A.I. and their religious figurehead as they wage war on the universe searching for an egg. If you’ve read a Hickman book before, this is pretty bog-standard. The other, easier to follow plot, involves a streetwise courier and her induction into a guild of all-women assassins from around the galaxy. Again, pretty standard stuff. The latter is a perfectly compelling and often hilarious, as Hickman utilizes his brand of sardonic humor. Witnessing this new universe from the ground level through our protagonist’s perspective is the exact sort of comics magic most may expect.

The big cosmic plot on the other hand is, well, very Hickman. It’s fascinating, don’t get me wrong, but it takes a long time making itself feel relevant. These two seemingly separate stories take so long to come together it leaves the ending feeling rushed. Don’t get me wrong, it’s still wholly satisfying and the plots come together quite nicely given the time constraints. I just found myself wishing that I’d gotten more time with this universe once all the ingredients came together. Don’t get the wrong idea, this is a fantastically imaginative and entertaining comic. I just wish there was more breathing room in the right spots. 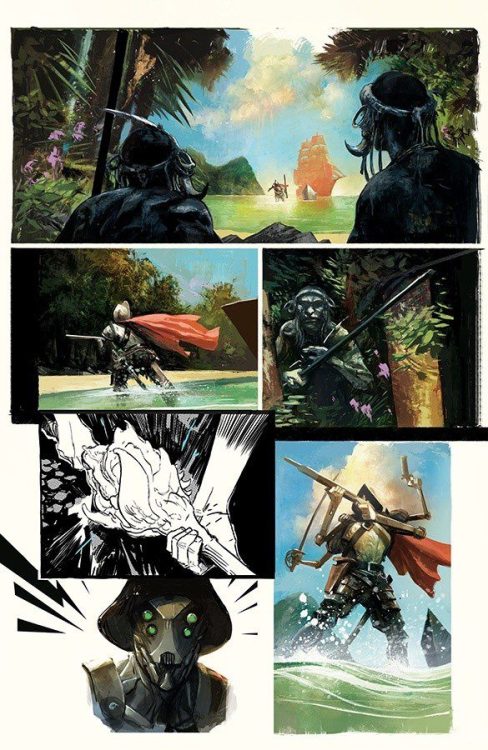 It takes a masterclass artist to craft a Hickman vision, and Mike Huddleston manages to fit the bill in Decorum. His ever-shifting style and unreal direction are the majority of what makes this series so memorable. Huddleston changes from more conventional pencil and ink art for the assassin plot. This juxtaposes to the abstract, painted Ditko-esque visuals presented in the other plot. There are even more multitudes, though. Huddleston will drift from impeccable painted views of planets and cosmic events, to intentionally unfinished-appearing line drawings at a moment’s notice. It’s consistently inconsistent and somehow, somehow, it makes sense. Not only does it make sense, it’s mind-bogglingly cool. Character details and alien designs are diverse and wildly unique, as we would expect from a comic of this scope.

Panel design in this book, which is also brought together by Sasha E. Head, comes across as part comic and part visual guide to a new galaxy. Huddleston completely eschews conventional panel direction in favor of panels overlaying one another and slicing into each other. The fact that this comic has such wild direction but still pulls the reader along with no trouble or confusion is a remarkable feat. The geometric designs that pattern the info-dump pages are classic Hickman-comic material, and they always manages to continue building a great hard sci-fi atmosphere.

The lettering from Rus Wooton is dynamic and modern. Fonts and effect lettering trade off naturally and change in perfect step with events on the page. This is an unbelievable looking comic from front to back. While its intentionally all-over-the-place style may rub some the wrong way, it is regardless a massive feat of comics talent. 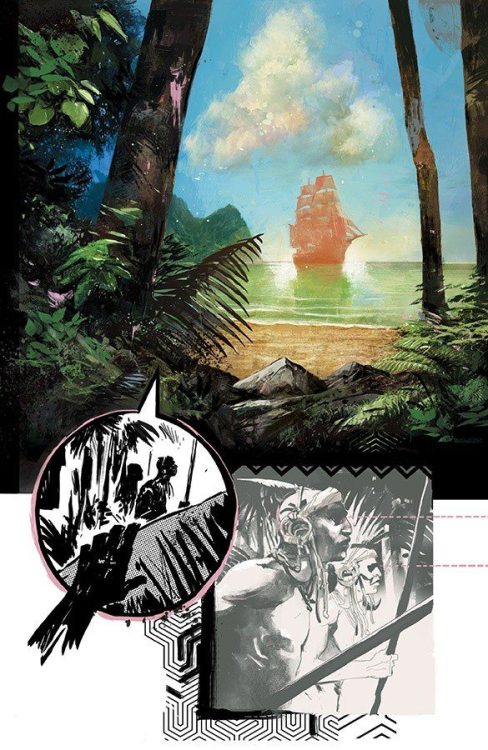 Decorum is a massive display of science-fiction imagination and raw visual talent in comics form. Jonathan Hickman’s writing on the series is tight, compelling, and wholly entertaining, even if I feel it needed more time to breathe and explore its concepts. The visual work of Mike Huddleston, with design work by Sasha E. Head, is stunning and full of surprises. Huddleston constantly changes style and approach, which when combined with this book’s off-the-wall visual design, makes for a comic experience unique unto itself. You can read all of Decorum now via any comics app you may use, or wait and grab the gorgeous oversized-hardcover edition when it releases this Spring. I know what I’ll be getting.

Subdued only by its length, Decorum is a massively imaginative and beautifully drawn Science Fiction sprawl that accomplishes more in 8 issues than many series can do in 50. Series Review: DECORUM - Next Stop: God Machines, Lady Assassins, & Cosmic Eggs