I discovered Robb Mirsky’s Sludgy in 2020 as part of a deep dive into new mini-comics. Deceptively simple, Sludgy is a comic that really understands cartooning and all its components; from conception, to design, to production. I was able to catch up with Robb recently and pick his brain. Read on and make sure to grab Sludgy!

Monkeys Fighting Robots: First off Robb, thanks for taking the time to talk to us. How are you doing so far in 2021?
Robb Mirsky: Hey Manny! Thanks for talking to me! After the hell that was 2020, I’m feeling pretty good.  I know it’s just a number on a calendar, but I was more than happy to move on from last year.  Things still obviously suck, but I’m working on a bunch of new stuff and feeling good regardless.  Comics keep my focus away from all the BS that the news and social media keep piling on.  It’s a nice distraction.

MFR: For our readers that don’t know your work, give us an introduction. And tell us all about Sludgy.
RM: I’m a cartoonist in Toronto, Canada.  I’ve been self-publishing for the better part of two decades. I work mainly in the vibes of alternative comics, or like, the undergrounds.  I don’t really mess with the Big 2 comics.  I like to make funny comics.  I’ve spent most of my childhood reading MAD Magazine and newspaper strips like Calvin & Hobbes, and The Farside.  I like to see comics as an escape.  I wanna laugh away the pain of the real world, and a good goofy comic is perfect for that.  Sludgy is one of my many characters.  They are cute, they are cuddly, and they are deadly, though I don’t think they really realize that.  In the first Sludgy story, they are just wandering around the forest looking for a companion, and wind up killing everything they try to touch… Heart of gold.  Hands of death.  I like to describe Sludgy as Casper the Friendly Ghost meets The Toxic Avenger. 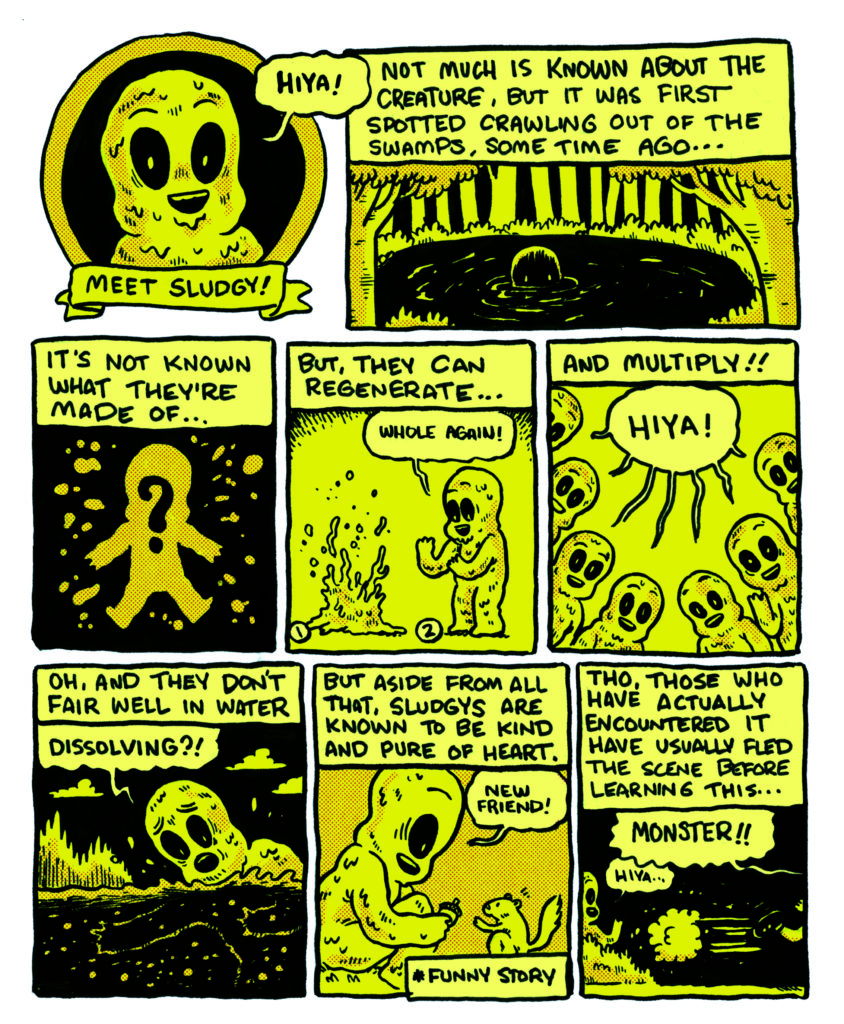 MFR: So let’s start with the classic, basic…how did you get into comics and how did you get into MAKING your own comics? Who are your influences?
RM: I’ve been into comics for as long as I can remember.  Like I said, I grew up with newspaper strips and MAD Magazine.  Things like Peanuts, Archie and Harvey Comics were really big for me as a kid.  I have comics I made when I was 8 and my dad sent them to the newspaper.  They didn’t print them (shocking), and it was my first taste of rejection in the world of comics!  I got bored of superhero comics pretty early in life but fell into The Maxx pretty hard as a teen.  It wasn’t until I discovered Robert Crumb for myself that I really felt a want to make my own comics and actually try.  All the other comics I had read up to that point looked like I couldn’t make them.  All polished and neat, and boring.  Crumb turned my head upside down (much like early experiments with drugs) and comics seemed exciting again.  Then I found Johnny The Homicidal Maniac and I was sold.  Content-wise it was perfect.  I could almost draw like that too.  It was the first time I was like “I can do this.  I wanna do this”. So for influences, I would probably say (but not limited to) Robert Crumb, Peter Bagge, Jhonen Vasquez, Bill Watterson, E.C. Segar, the art of ‘Big Daddy’ Roth, and honestly, there’s too many to list.  I’m constantly influenced by great work I see on a daily basis.  Inspiring books are spilling off my shelves. There are so many!

MFR: What’s your process for making comics? How do you start and where do you start? How long did it take to start and finish Sludgy?
RM: The process changes from project to project really.  Sludgy is an improvised comic.  I take it page by page and just try to figure out where to go next.  I don’t like heavy planning. It usually kills a project for me.  I’m part of the Toronto Comic Jam, and the idea of jamming comics is a really appealing way for me to make.  I’m currently making a new comic, and I just drew quick thumbnails of each panel, thinking only what the next panel should be, and then I break it down and lay it out on the pages.  I dunno how long it’s gonna be till I reach the end.  I like working loose.  Scripts are too formal.  If I keep it simple, I work quicker, and the results are always better.  I wrote and drew that Sludgy story in 2 months.  I just finished another Sludgy story that took 5 weeks.  So, I’m speeding up, which is great, cuz comics take a long ass time to make!

MFR: When did the idea for Sludgy first come? It’s such a wonderful character design.
RM: I literally drew the title to the first story and the first panel (a swamp) on a scrap of paper to get it out of my head, and that doodle just sat on my desk for a month before I wanted to do something with it.  I used to participate in a November drawing challenge called ’30 Days of Comics’ in which yer supposed to draw a new comic, or page, or panel a day.  Sludgy just became Sludgy cuz I wanted a comic to work on.  And the design is based on Casper.  Melty and drippy, Sludgy is basically the same shape and has a similar disposition.  That’s pretty much where the similarities end though.

MFR: How did it progress from there? did you see a comic in it right away?
RM: I just kept drawing.  I drew a 17-page story with no planning, and thought “well that was so much less stressful than when I try!”  It was the longest story I had done at that point.  I kinda felt like I had something, and I enjoyed the character, so I just kept going with it.  And I usually think in terms of comics. I love comics.  They are the language I understand best.  So, there’s always comic ideas rolling through my brain. 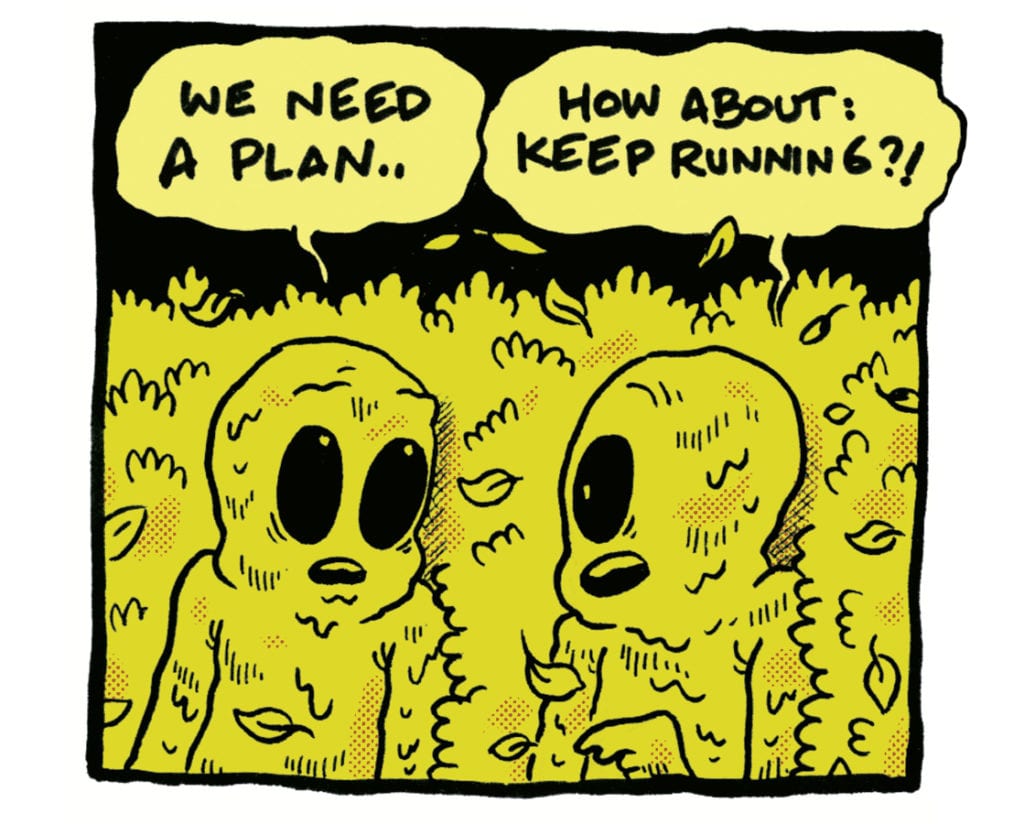 MFR: I really love the color palette you used. What color exactly is the dominant one? How did you get that unique color?
RM: Thanks!  It’s a gross kind of yellow, a perfect accompaniment to a kinda gross character!  I use a pink to shade it and when it blends with the yellow, it gets that weird sludge vibe.

MFR: What led to you deciding on such a striking color for the book?
RM: Hehehe.  So, I’m colourblind, and colouring my comics is painful and stressful.  The first Sludgy story was printed in my old collective’s anthology series ‘Read More Comix!’ (No affiliation with Cartoonist Kayfabe, we had the name first), and the anthology series is in full colour…. So my colour choice was based on a mix of finding an easy way around colouring, and it’s also supposed to simulate like old monster movie films. Instead of the same black and white, it’s a murky slime colour. I think colouring the Sludgy stories with a proper palette would ruin the story.  But I could just be lazy… who knows!

MFR: Sludgy is also a mini-comic. Why did you go with the smaller format?
RM: I love floppy comics. I love big ol graphic novel format comics too, but my true love is short stories, strips, things like that. I’m not sure if I have a graphic novel in me.  I just gotta keep trusting my gut and make things that I wanna make. I try not to worry about if anyone else will enjoy it until I’m done..  and then it’s all I worry about cuz selling books is stressful!!!

MFR: And what kind of stock is Sludgy printed on? It feels good to flip these pages!
RM:  It’s like the standard glossy paper from a printer here in Toronto.  I’m not crazy about glossy paper usually, but I lucked out.  It does feel nice!

MFR: Are you going to be working on any new Sludgy (or any other comics) in 2021?
RM: I already finished the next Sludgy story.  It’s 24 pages long.  I just gotta scan and colour it, but the writing and drawing are all done.  I have more ideas for Sludgy, so I’ll probably write more when I feel it’s time.  Currently, I’m working on a couple new things for the year.  And I’d like to draw more for the strip I created last year to ward off pandemic insanity. It’s called ‘Dingus & Dum-Dum’ and it follows two 1930’s inspired goofballs that are always on the hunt for a couple of bucks or some food or just a good grift.  You can read 75 strips of them on my Instagram now.  I’d like to do more and collect them in a book maybe, but I’m not really committed to any one idea.

MFR: And where can readers find your work?
RM: I’m on Instagram as @mirsktoons. You can read some other things on my website www.robbmirsky.com. Or you can pick up a real book. Sludgy – https://mymovingparts.com/collections/comics/products/sludgy-comic. Read More Comix! Anthologies at https://readmorecomix.storenvy.com/ (Sludgy #1 is printed originally in Read More Comix #5). I also design and co-run a shirt-making business with my wife.  She’s a screen printer and I design the shirts.  You can check out and buy stuff at www.mymovingparts.com and follow us on IG @mymovingparts. There’s a limited amount, but we made a Sludgy shirt too!  Thanks so much Manny!  I appreciate you talking to me! 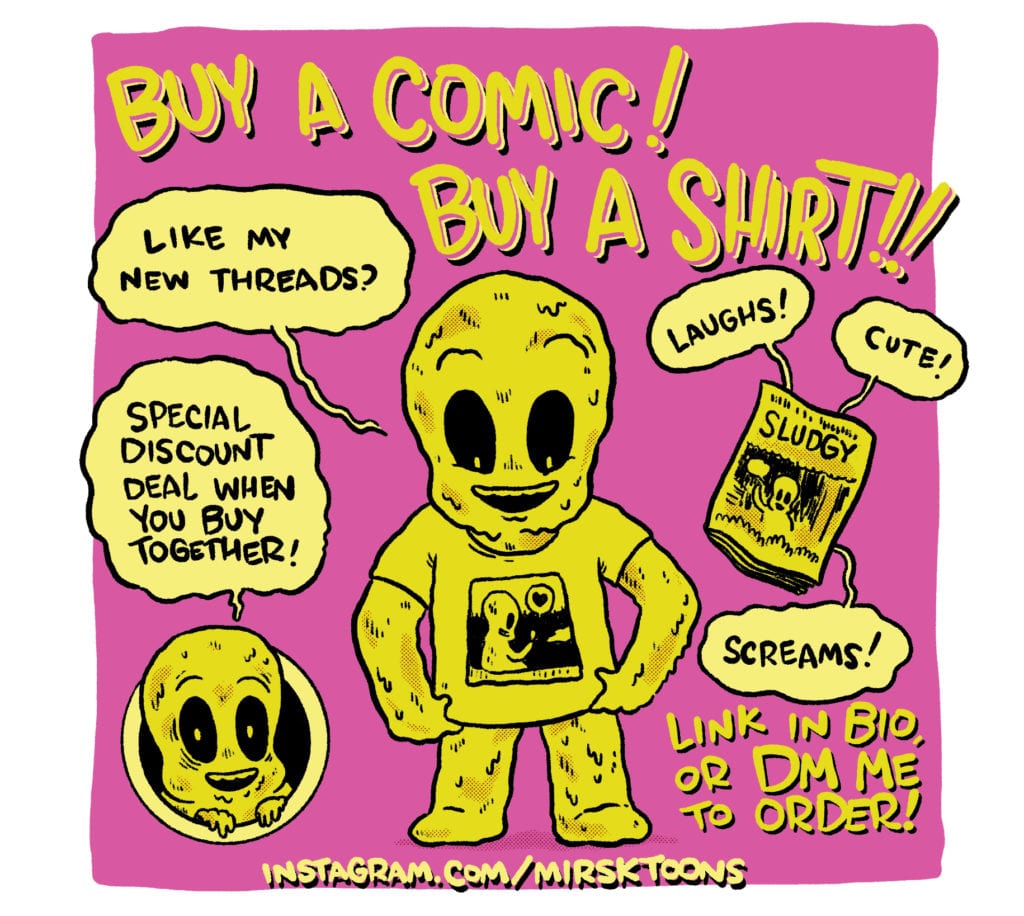