I follow a lot of indie artists and books, but I had not had the pleasure of experiencing Drew Morrison’s cartooning until Monkeys Fighting Robots editor Anthony ‘Ace’ Composto showed me some images and asked if I wanted to interview Drew. Upon laying eyes on those BROKENLAND images, I could not say YES fast enough! So check out my chat with Drew and then dive into BROKENLAND! You can actually check out a preview of the first issue here. And support the Kickstarter for issue four here.

Monkeys Fighting Robots: Drew, thanks for taking the time! Can you tell us a bit about yourself? What’s your comic book secret origin? How did you get into these funny books?
Drew Morrison: Thanks for having me, Manny!  I grew up in Buffalo NY in the ’80s & ’90s, in a home that fostered creativity, with access to a number of awesome comics shops.   I mainly read TMNT, Spiderman & Venom back then but also loved The Far Side, Calvin & Hobbes and Edward Gorey.  I had aspirations of going to the Joe Kubert school but my Mom made a strong argument for Pratt.  She basically said, go immerse yourself in all the different art forms and you can always make comics if you choose to.  I started drawing comics in college alongside making larger fine art pieces.  We had an incredible selection of graphic novels and comics at the library so I’d spend hours there reading, to save money.  Post-college I pursued commercial illustration to some success, but in the end I completely prefer the comics medium over just about anything else.  I think if we’re lucky we come around full circle to the things that excite us in our youth.

MFR: Let’s talk about your latest project. First of all, congratulations on hitting your goal for issue four. So can you give us a synopsis on BROKENLAND?
DM: Thank you!  In truth, it’s my first comics project of any length.  I’ve been trying to boil down the story into as few words as possible – what I came up with is ‘Abused Marshmallow Navigates Uncaring Urban Cartoon Hellscape’.  The main character Meeso is trying to find themselves, their way, and also do a bit of good in the process.  As in real life, the obstacles are endless and we dive into both internal and external conflict throughout each issue.  The setting really serves as the main character and an abrasive foil for Meeso (and the reader) to be pressed against. 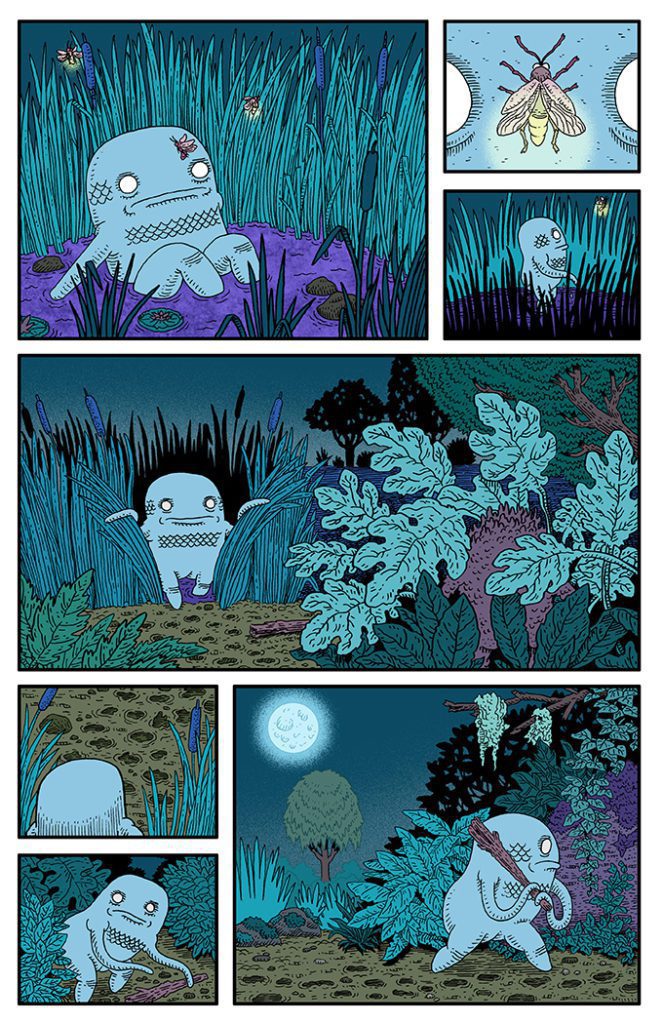 MFR: How about a little history behind the publication of past issues? How did you get to issue four? How long was that journey?
DM: I started planning Issue 1 in 2018, so it’s been about 4 years of self-publishing Volume 1 of this book.  I basically set out thinking that I only get to do the next issue if each one is well received and reaches the funding goal.  I like setting up near-impossible goals for myself.  It’s a 128-page book with over 850 color panels and I’m very proud of it.  I worked plenty of other gigs and rebuilt our current house during that time frame so it was a challenge carving out consistent time to work on BROKENLAND.
MFR: You’ve stuck with Kickstarter for this series from issue one. What led you to Kickstarter in the first place and what made you stick with it as a way to get the series out? Did you ever consider other publishing options?
DM: Around the time I was finishing colors on Issue 1, I joined up with the ComixLaunch group and that led me down the Kickstarter path.  We’re a group of like-minded self-published authors and creators who help each other build and run campaigns.  Collectively the group has published over 3 million dollars in comics projects!  The Kickstarter platform has grown my readership substantially since the first launch so I kept using it.  My future ambition is to get BROKENLAND released as a graphic novel from an established publisher.
MFR: One more Kickstarter question. I’ve asked this to almost every creator I interviewed and I always learn something new from their answer. Why do you think Kickstarter (and crowdfunding in general) has become so huge in the comics world.
DM: The short answer is that it lays waste to the gatekeepers and lets creators sell directly across the globe.  It’s accessible, easy to use and a far more exciting place to browse books than Amazon.  I think dedicated comics fans know they can find really unique projects to back on Kickstarter and that keeps them coming back.  I also think most comics creators know that getting picked up by a publisher is wildly competitive and this is a pretty great tool to have as an option.
MFR: The first thing that stood out for me was actually something that was missing, the dialog. What made you want to make this a ‘silent’ story? Was that something you decided early on?
DM: The decision was mainly about making Meeso a silent character.  The idea to keep the book silent quickly followed.  I’d been drawing the character for years and never heard them speak a word in my mind.  I figured if the protagonist is not speaking, why not let the reader have an image-driven experience.  By approaching the world silently, Meeso acts like a vessel for the reader and it keeps the story more interpretive as far as I can tell. 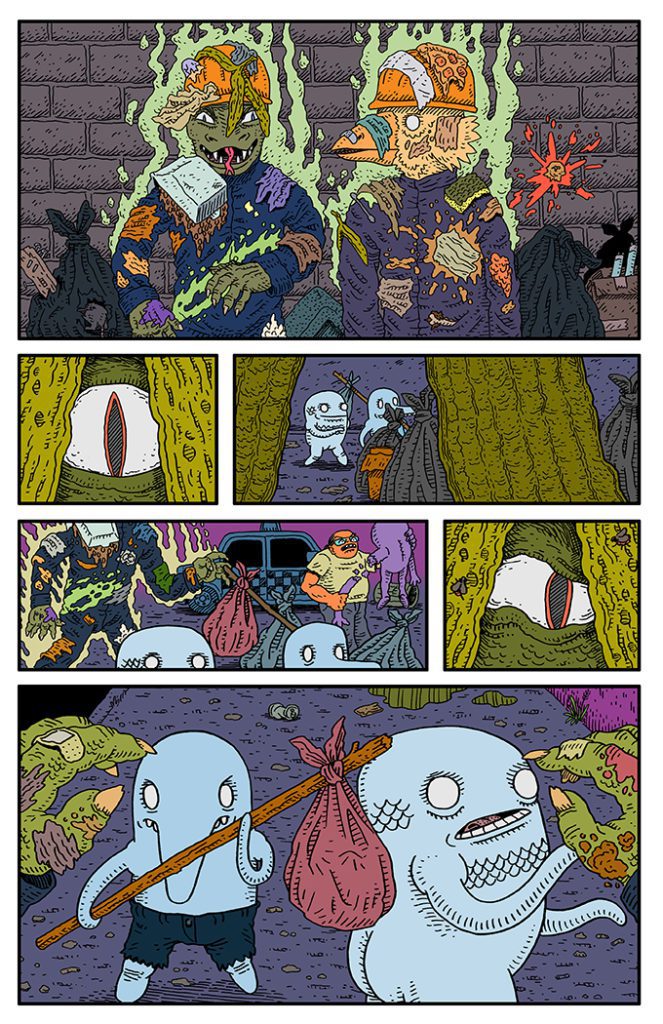 MFR: The art is also beautiful. For a story taking place in a world with so much grit and grime, the linework is clean and easy on the eyes. What’s your process for getting these images on the page? Where and how do you start?
DM: I appreciate that!  I definitely like the balance of the grimy subject matter with the intricate linework and generally bright palette.  I do rough thumbnail layouts on letter-sized paper and then translate them into blue-line pencils at 1.5 scale.  I draw at an old wooden drafting board that belonged to my Mom.  It has an architectural parallel ruler for laying out panels.  For BROKENLAND I decided early on to work within a 9-panel grid, because I knew with some limitations I’d go crazy.  I ink directly onto my pencils (after scanning them) with a Micron Pigma Graphic 1 marker and FC Pitt Artist Pens.
MFR: Are you a digital guy or pen/pencil paper?
DM: I only go digital for the coloring process, or for small corrections in the drawings.  Ink on paper is just a satisfying method that feels good, I’d never want to replace it.  My colors were nearly flat for Issue 1 but through the series, I’ve learned how to do some fun color holds, gradients and dissolve to increase the depth.  Ink on paper forever!
MFR: Would you say you have any specific influences on BROKENLAND, both thematic and artistic?
DM: My experiences in NYC and rebuilding 2 forgotten homes definitely drove the theme of this series.  Growing up in the suburbs of Buffalo, your garbage kind of magically disappears at the end of the driveway.  A garbage bag is like a black hole we use to conceal the disgusting truth.  In NYC the sheer population density scales waste output in a way that’s unfathomable if you stare at it long enough.  When gutting houses, you spend a lot of time at the dump and witness everything that’s brought there.  Anyway, this really affected me and I wanted to discuss it through the comics while holding onto humor in what truly is a comical situation.  My artistic influences are broad and I think they all influence the look of the comics.  I can appreciate a set of 1800’s etchings as well as a late 70’s grindhouse flick.
MFR: Who and what would you say are your biggest artistic influences overall?
DM: If I were to list the artists who influenced BROKENLAND the most:  Robert Crumb, KAZ, Jim Woodring, Jason, Thomas Ott, Dave Gibbons and Geof Darrow.  Dark comedy in the form of writing, art or film fills my creative well the most.
MFR: Now that you have met your goal and with almost two weeks still left in the campaign, what stretch goals do you have in mind?
I don’t really get into the serious stretch goals – once a campaign is funded I try to focus on delivering the best experience for everyone who has already backed.  I think I’d like to include something extra for everyone if possible, like a small set of trading cards or sticker pack.  That said, the more I can earn on this the better proof I have when shopping BROKENLAND to publishers.
MFR: What’s the future plan for BROKENLAND? Any more stories to tell?
I’ve ended Issue 4 / Volume 1 in a way that is conclusive but would allow me to continue the story down the road.  I think I would revisit it with focus on a different protagonist and thematic focus.
I can say with confidence that I’m done self-publishing the series for the time being.  I’m eager to find a publisher to reprint and release 1-4, with potential future volumes.
MFR: Besides BROKENLAND, are there any other projects you are working on you want to talk about?
DM: In the background, I’ve been gathering ideas and material for an anthology of short horror stories in comics form.  I know these are coming out faster than they can be read, but my goal would be to make it a truly frightening reading experience.  I’m planning to co-write the stories with a good friend and create the artwork in black and white.
MFR: Where can folks find your work?
DM: I update my Instagram page the most, @drewmorrisonart.  My portfolio of illustration work can be viewed at http://drewmorrison.com
MFR: And finally, any final thoughts you wanna share with our readers, any last-minute marching orders?
DM: Most importantly, check out the current Kickstarter for BROKENLAND 4 / Volume 1 !  Please consider backing the Kickstarter, it’s live through October 31st!  The more I can overfund, the greater ability I have to jump right into the next publishing project without taking gigs in construction or retail in between. 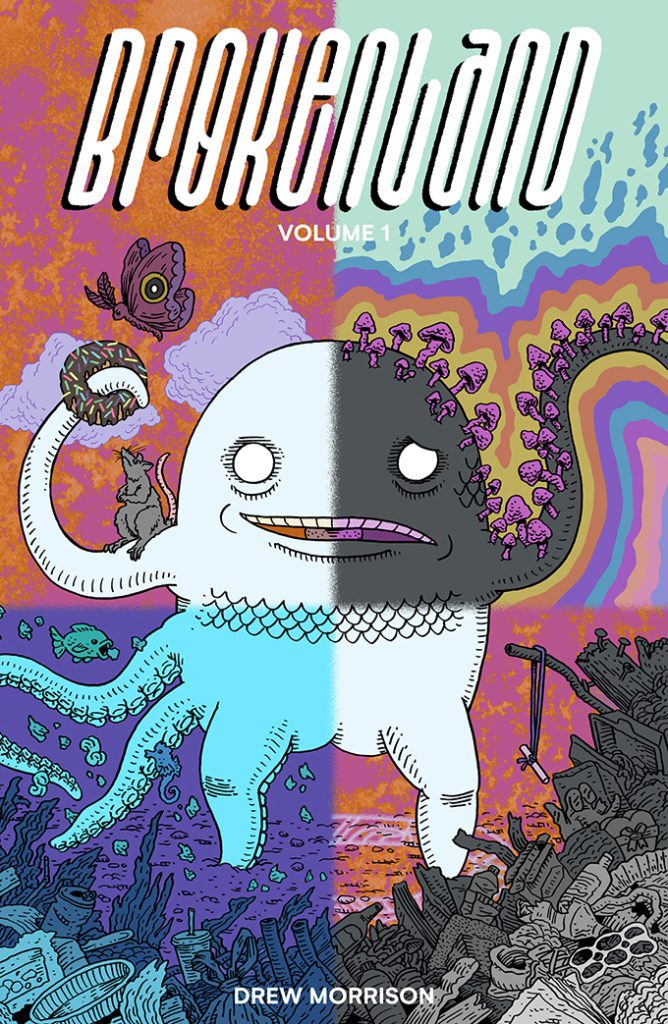