This week I’m chatting once again with Jonathan Thompson, writer (TALES FROM THE DEAD ASTRONAUT) about his newly launched Kickstarter for his latest comic, the crime/noir book Burn Residue (check out our review here).

Monkeys Fighting Robots: First of all, congratulations on your Kickstarter launch for Burn Residue! Give our readers a quick synopsis of the book/story!
Jonathan Thompson: BURN RESIDUE is the story of Willy Boyd, a mild-mannered gas station attendant with 3rd degree burns all over his body. One night, while walking back and forth to the pump, a car pulls in…driven by one of the men who set him on fire years ago.

MFR: Am I correct in that this is your first Kickstarter Campaign?
JT: This is…in all its nerve-racking glory.

MFR: I know you’ve done straight up self-publishing before, but what made you go the Kickstarter route specifically for this Burn Residue?
JT: I found my first experience with TALES FROM THE DEAD ASTRONAUT kind of limiting. I don’t feel like we got to the audience we could have if given a bigger platform. I knew that BURN RESIDUE was going to be special. As a three-issue mini-series (or OGN depending on your backing preference) I wanted it to get as large an audience as I could. Kickstarter is a great platform for that.

MFR: What do you think Kickstarter has been so successful for a lot of comics creators and cartoonists. Especially in 2020?
JT: I think a lot of it has to do with the pandemic and the Diamond shut down. People were without their comics for months. At that time there had to be a new way for people to find out what unknown creators are doing. I backed a lot of projects during those days. I think the bigger companies saw this and that’s how you ended up with Scott Snyder and BOOM Studios running campaigns. This only brought more eyes to the platform and set everyone up for success. There are a lot of great comics out there…and a lot are funding on Kickstarter.

MFR: So where did the idea for Burn Residue come from? Because, having read issue one, I can tell you it’s both an awesome story and also a very striking main character on his own too. Did something come first? The story or the character?
JT: Rossano’s art. He has a rough style that informed my thinking. I gave him an idea for a character, a gas station attendant with 3rd degree burns all over his body and what he gave back to me was inspirational. It really set off my imagination and I built the whole character and story around those first designs. 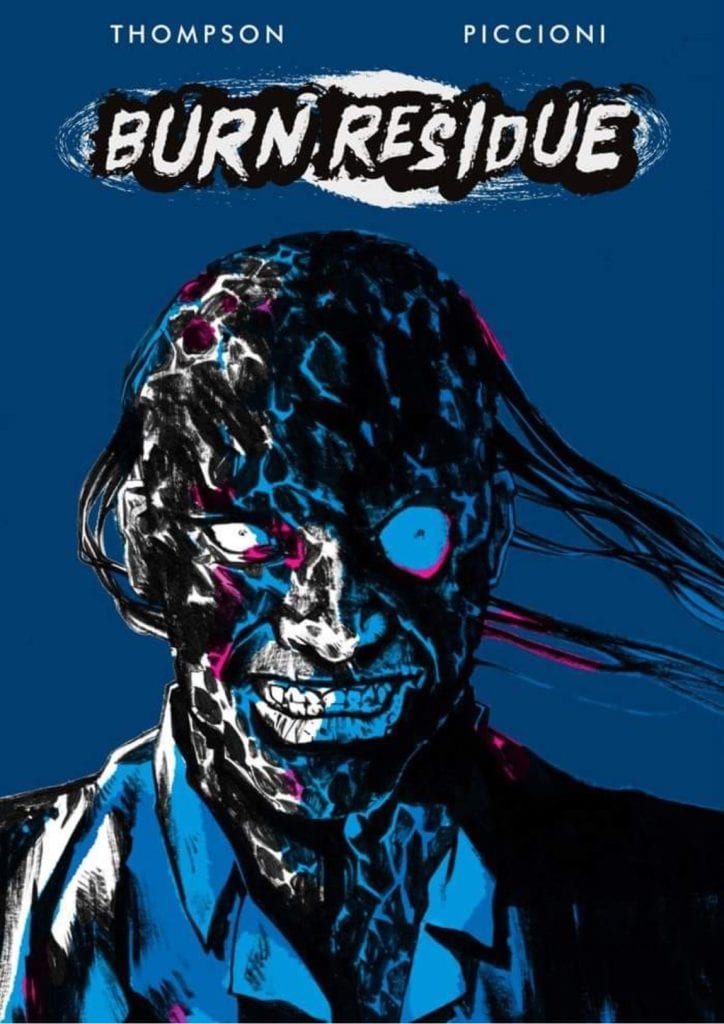 MFR: What’s your writing process/ritual like? Was it anything different or specific for Burn Residue?
JT: Only different in the way that with TALES FROM THE DEAD ASTRONAUT I was writing short contained pieces. Here I decided on that 32-page count per issue and made a list 1-32. I marked off the page turns and really just let loose. These scripts are as fun to plan/outline/write as they are to read. Then once I had the pages I did the lettering and made adjustments or additions.

MFR: Rossano Picconi is a fantastic artist. His art also really gels with your writing.  Where and how did you find this perfect collaborator?
JT: I saw his work online and reached out to him. I pitched him a few ideas that didn’t hit until I gave him the idea of this character, Willy Boyd. Like I said, once I saw his designs I knew we had something special.

MFR: How do/did you and Rossano work? What was the process like in getting to a finished book?
JT: Extremely well. It took a little bit of time to nail down the first few pages in terms of style and mood but after that, we hit the ground running. Rossano can really turn pages out that are haunting and beautiful.

MFR: Do you have a favorite moment from the book? What was the best page you got back from Rossano?
JT: Without spoilers, I have to say the two pages that really blew me away were pages 14 and 24. I love them so much I asked Rossano to send me them so I can frame them and put them in my office.

MFR: You also have the great crime comics creator David Lapham involved. Give our readers those tasty details.
JT: I sent David Issue 1 and told him what I was doing. I asked him if he would be interested in doing an original art piece for me of Willy and fortunately, he agreed. On top of that, he called Issue 1 “twisted” so I really took that as a great compliment from him. STRAY BULLETS is such a great book and it really helped me as a writer. Every story is so tight and meaningful and I hope that is what I’m bringing to the table every time I put words to the page.

MFR: And you have yet another crime comics great contributing? Spill those beans!
JT: Another stroke of luck. I have Jacob Phillips doing the cover for the collected, graphic novel, version of the story. Really a great get for us. Jacob’s work on THAT TEXAS BLOOD and the colorwork he’s done on CRIMINAL and PULP is really breathtaking. I’m excited to have him on board. We should be debuting that cover about mid-way through our campaign.

MFR: Did any specific comics or fiction inspire Burn Reside? Because I see a little Brubaker/Phillips in there (Criminal) and also Azzarello/Risso (100 Bullets). Did I hit some influences there? Who else would you say?
JT: I think it starts with a healthy diet of film noir like the work of Jean Pierre-Melville. 100 Bullets was the favorite comic of my late teens/early 20s. I first caught those in trades and just started absorbing them one after the other. Then during the pandemic, I caught up with everything in the Brubaker/Phillips world and I kind of knew what direction I wanted to go in with my writing.

MFR: Would you say Willy Boyd is a hero?
JT: Willy Boyd is no hero. He starts the story as a very broken man. When the car pulls into the station driven by one of his biggest enemies he is frozen. It is not until he sees the tied up woman in the back and watching Lanny drive off does he decide to do something. But, everything Willy does is for himself and his own sense of justice. He finds that revenge is a bloody weight tying down his soul. He struggles with his own actions until he comes face to face with the last thing he needed.

MFR: If Burn Residue is a success, do you have any desire to continue exploring Willy Boyd and his world? Have you thought about either his past or future?
JT: I think it can go in either direction. Maybe as a one-shot but right now I’m looking to the future with other characters that I can bring to life with Rossano. If we make it to any sort of stretch goals I do have a one-shot with a different group of characters I would love to do and give away to backers.

MFR: Finally, where can MFR readers find the rest of your work?
JT: Get on that Kickstarter and then head over to spacestationzed.com I have a sci-fi horror short story up there with illustrations by Luck Welch. It’s a fun story spread out into 5 parts. And follow my Twitter @cmdrofzed and Instagram @spacestationzed for some peeks at the art and process of BURN RESIDUE. But mostly back today!