Self-Published Spotlight: A GAME OF DOUBLES

Ryan Tavarez is the artist on the upcoming A Game of Doubles, the new comic written by Jonathan Thompson (Jonathan has been writing some of the best indie comics in the past year or so; Tales Of The Dead Astronaut was a surreal sci-fi anthology; Burn Residue is one of the grittiest crime comics I have ever read. Check them out). A Game of Doubles is the story of twin brothers, one of whom is a former tennis prodigy, who run into some serious trouble on their 50th birthday.  Ryan took some time to field and volley some questions with me. So check it out and make sure to support and check out A Game of Doubles. 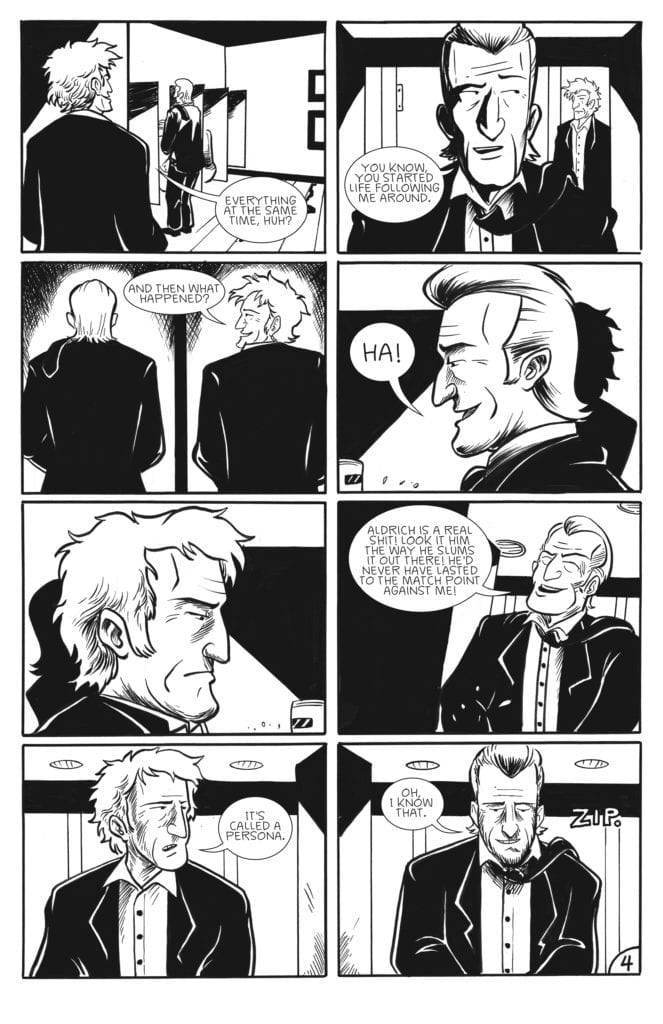 MFR: Ryan, what was your initial reaction to A Game of Doubles. What attracted you to the project?
Ryan Tavarez:  This all starts with Jonathan’s short series: Burn Residue. I remember backing it thinking of it as being a cool slasher comic with the melted gas stations attendant. Thinking: “Cool! I love horror, I love slashers. I’m in!” And once I got the book and started to read it, I realized it was much more than that. And the twist hit me unexpectedly. And it was refreshing. When Jonathan reached out to see if I wanted to collaborate, I was in! And the script he delivered got me again! As I was reading his synopsis and the script I was like “…hmm a tennis comic? I’m not so sure.” But again, he pulled a swerve and it turned out to be a much darker story. Using Hitchcock as a foundation, and using the pace of a past tennis match to frame the story. Brilliant.

MFR: I love your style. There is a lot of weight and movement in the images I have seen. Did you approach this project with these elements for a reason?
RT: Thank you! I like to think I come from the school of Kirby. Dynamism and movement is a major focus for me, even in still moments. I also like to think about how a character carries themselves in a conversation. I love to think about how people, in real life, change their posture depending on how they feel about whoever they are talking to; eye contact, where someone holds their hands, tone of voice. And then trying to capture that in comics.
I think both a conversation and a tennis match can be just as intense if framed properly, and that was the goal. Line up the intensity of the past tennis match, with the conflict in the present.

MFR: What was your process like? What tools and processes did you use to create the pages?
RT: I work with a hybrid system of digital and traditional! There are multiple parts to this. And it might get a little long, please feel free to condense this anyway you see fit.

1. Research – The first part was research. To begin, Jonathan gave me the script and two references: Stray Bullets and a documentary called John McEnroe: In The Realm Of Perfection. I read and watched the influences to get a good idea of where Jonathan was coming from. Then read his script. I read the script multiple times imagining the panels.
I then took some time to think of the angle I wanted to approach with the art. I decided on Alex Toth and the series Ping Pong. 2 very different things that I love.
2. Character – Then I had to cast the comic. And I spent a few days sketching what the brothers might look like. Once I had something that I was happy with I got it over to Jonathan for approval.
3. Thumbnailing – Then I went back to script and took it panel by panel. Jonathan specifically wrote with the 2×4 grid in mind a la Stray Bullets. So it was already all broken up. I do this part digitally.
4. Pencils – I enlarge my thumbs to 11×17 and print them in a really light red color. Then clean them up with a red pencil. Some people use a non-photo blue. But I find it’s easier to target and drop the reds out digitally when I scan the inks in.
5. Inking – I rule out my panels with a 1pt size Micron. Then hit any sound effects with the same pen. From there I ink it panel by panel. I’ll ink the faces first using a really fine brush pen. Currently using a Tombo Fudenosuke. Then I hit the lines with a Raphael number 4. Using the same brush to fill my solids. And using the Tombo to do my hatching.
6. Scan and Cleanup – 11×17 flatbed Epson scanner – 300dpi. Then in photoshop I drop the reds, darken the blacks, and clean up any smidges and smudges.
7. Screentone – I lay in screentones that I scanned from Deleter originals.
8. Lettering – Done digitally, word balloons are made with the pen tool. 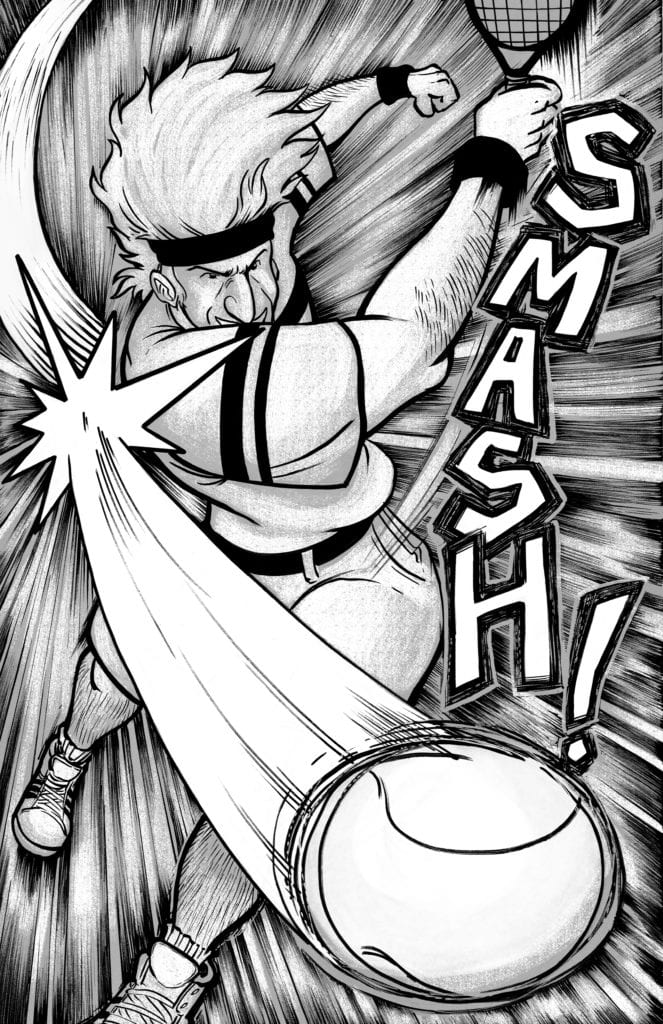 MFR: Would you cite any specific artist or work as having an influence on A Game of Doubles?
RT:  I spent time researching and taking cues from Alex Toth. While my style of drawing is not anywhere near the beauty of Toth, I really took to heart how he composed panels. Using blocks of black to help add to the weight and movement in some of the more stationary panels. Something as simple as a diagonal line goes a long way in spicing up a composition. And for the tennis match, Ping Pong by Taiyo Matsumoto was the main study. I knew the intensity of those matches would fit perfectly for the flashbacks, and really Ping Pong was my best point of reference for a sports manga to date.

MFR:  How about you, was tennis something you knew anything about beforehand?
RT: I’m not a big sports fan. And the sport I do like is baseball. So tennis was definitely alien to me. But it was a great opportunity to learn about the sport and also went into why I was interested in working on the book. Jonathan also provided a really great documentary that did a good job of covering the basics.

MFR: Did you have to reference tennis games? Other than sports manga, comics don’t get too many sports scenes. Was this a challenge in any way?
RT: A lot of google searching was done. But really just focusing on why I loved Ping Pong so much. That really was the first time a sports manga ever got my attention. Challenging, absolutely. I am nowhere near the talent of Matsumoto. But I did my best to learn from him.

MFR: Did you have a favorite sequence to work on?
RT: Specifically, pages 3 and 6 are my favorite. The original reveal of intent with Jackson. And that all-out splash page to really tell you what kind of person he is.

MFR: Anything final you would like to add?
RT: I’d like to thank the folks out there who give this short a shot, don’t let the tennis deter you from checking this out if it’s not your thing. There’s a suspensefully twisted tale under the hood here that should tickle fans of horror comics and Hitchcock. Give A Game Of Doubles a shot! Lastly, check out my series Nomads if you’re into barbarian post-apocalyptic action. Volume One is 120 pages collecting the first 4 issues, with Volume 2 due sometime this winter. You can find that and more here: www.tavarezart.com.

MFR Thanks again for taking the time!
RT: Thank YOU for the opportunity! Salude! 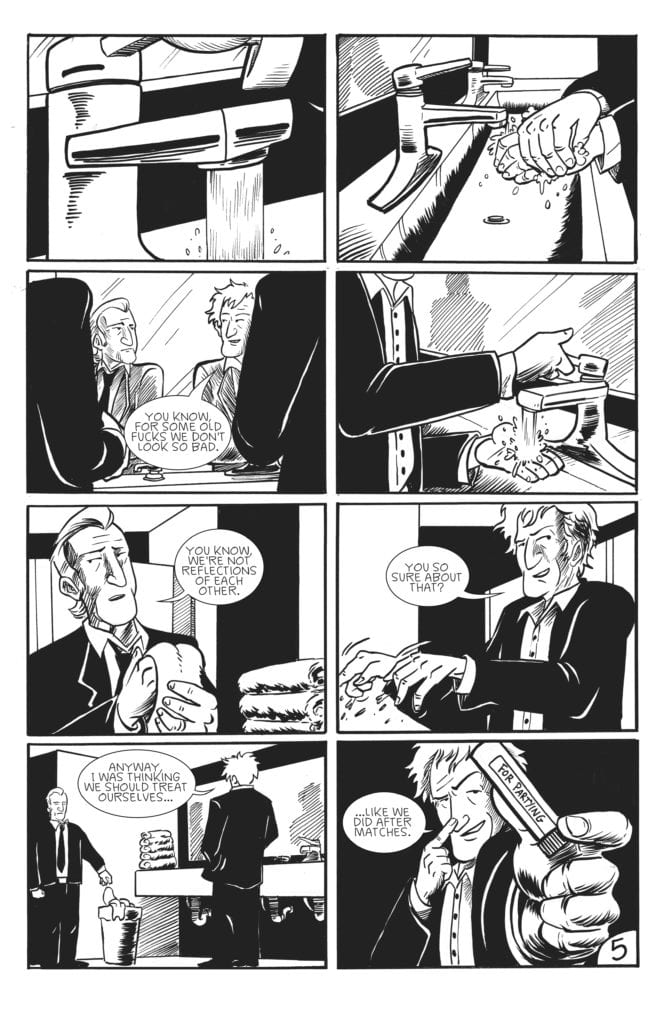 You can support the A Game of Doubles Kickstarter here.