Review: SABERTOOTH #1 Gets In The Mind Of A Murderer

Sabertooth is back, and he's angrier and more violent

Sabertooth #1 answers one of the most pressing questions in the X-Men books since Jonathan Hickman ushered in a new era for the mutants; What happened to Sabertooth? Victor LaValle is not only going to show us what Sabertooth has been up to, but he’s also going to show us that he’s as vicious as he’s ever been. Joined on the issue by Leonard Kirk on pencils, Rain Beredo on colors, and Cory Petit on letters, we are allowed to see what happens to the mutants that break the laws of Krakoa.

LaValle had an exciting decision in front of him for a book like this. He had to decide how he wanted to write Sabertooth. At times, the character appeared as an anti-hero who would work with other mutants, or he was a ruthless killer who did whatever he wanted. LaValle chose the latter. This is a psychological book that focuses on the mind of Sabertooth. From the get-go, LaValle allows us to see that Sabertooth has no remorse for what he did in House of X, he killed civilians while on a mission, and he has no intention to change. This is made clear by him attacking fellow mutants the first chance he gets. LaValle writes Victor like the true creep that he is. While meeting with representatives from Krakoa, all Sabertooth wants to do is murder them. Sabertooth not only wants to kill everyone, but he also wants to kill them gruesomely, and in that sense, LaValle nails down who Sabertooth really is. LaValle takes us through the inner workings of Sabertooth’s mind and shows us how disturbed of a character he really is. Whether it’s ripping off fellow mutants’ faces or beheading people who wish to help, there is no redemption in sight for Victor Creed. 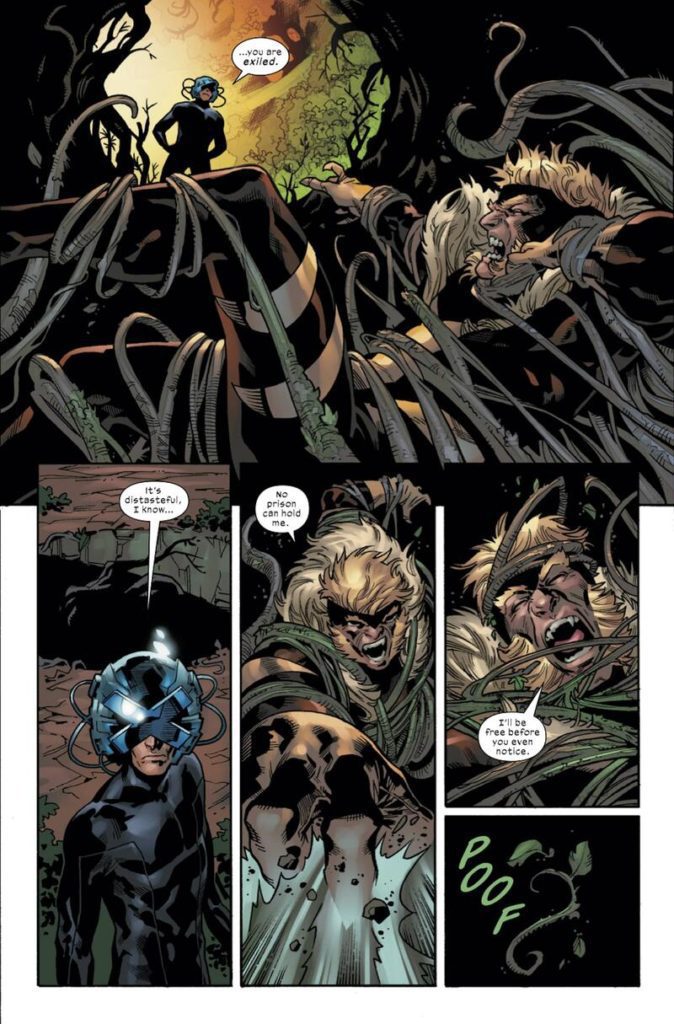 Kirk has his number called as he does the pencils for this issue. Kirk has the difficult task of drawing all these vicious panels of beloved characters getting murdered. On top of that, he also has to draw a visually appealing issue that won’t ruffle feathers as these characters die. Kirk shines most on this issue when drawing these deadly panels. X-Men dying is not that big of a deal at the moment, but them dying this violently is something that rarely happens. Having a beloved character getting their throat bitten out by the story’s main character is a tall task, but Kirk pulls it off with his stylish line work and clean pencils. Kirk can draw both the feral side of Sabertooth as he murders all his enemies and the calmer, emotional side of the character as he accepts his final fate in the pit. This duality highlights the complexity of a character like Sabertooth and Kirk’s talent as an artist drawing both emotions.

The colors by Beredo are integral to the issue, if for no other reason than to color all the various superhero blood everywhere. In all seriousness, Beredo had a challenging task at hand; coloring a maniac murdering for half the issue is a difficult task. Decapitated characters with blood splashing all over the page, blood on X-Men’s faces mixed with a dark background and of course, the ever difficult Warlock. Many of the backgrounds are light for such a dark story, especially when Beredo is lighting up the page with a Cyclops optic blast. This is a violent and gross issue to color, but Beredo does a fantastic job of keeping readers invested in the work on the page. Beredo’s colors add life to this book, whether it’s blood-splattered or an emotional epiphany for Sabertooth.

Petit is on letter duty, and he also had a difficult job. As characters get their faces ripped off, we see “Shhhrrrrppp.” In a comic book, we can hear that noise in our head as we read the issue. Petit also gives us the infamous “Bamf” sound from nightcrawler. You may smell a little brimstone as you read that on the page as well.

Sabertooth #1 picks up right where we last saw the villain, in the Krakoan pit. This issue gives us insight into what Sabertooth has been doing with his time and why he still deserves to be locked up. Sabertooth #1 is on sale at a comic shop near you!

Sabertooth has been living in the pits of Krakoa for too long and now he finally has a shot at his freedomReview: SABERTOOTH #1 Gets In The Mind Of A Murderer