Let’s Learn About Movies: ‘Rogue One’ and the Three Act Structure

In case you weren’t aware, Monkeys Fighting Robots reviews movies. Like, a lot of movies. And not to toot our proverbial horns, but they’re pretty great reviews. But we don’t want to stop at providing some of the best reviews the internet has to offer. We want to enhance your film-viewing experience!

Have you ever wondered what “the second act sags” or “the character motivation was unclear” means? Or maybe you just want to say more than “it’s good/bad” when a friend asks how a movie is? Don’t worry; we’re here to help. And since Rogue One came out on DVD/Blu-ray today, what better place to start? Without further ado, this is: Let’s Learn About Movies: The Three Act Structure.

The three act structure is not a “fact” per se. It is a critical theory that can be applied to most films because of how narratives are often constructed. It is a standard of sorts, and a very convenient way to organize and critically think about a film.

Also, there are ***SPOILERS*** ahead for Rogue One. Onward!

The three act structure is all about tension. Tension is created when a complication is introduced that upsets the status quo, causing conflict. Tension is released when that complication is resolved, bringing about a new status quo. Characters have their own tensions that can be reduced very simply to wants and needs. What a character wants drives the journey (the second act), while their need drives the third act (the third act).

Tension in a narrative is centered around the protagonist, the character through which the story is told. This does not need to be who the story is about: the most recent and best case in point is Mad Max: Fury Road, which is undoubtedly Furiosa’s story, but is told through Max, and therefore he is the protagonist.

Sets of scenes organized around creating and resolving specific tensions are called sequences. There are eight sequences: two in the first act, four in the second, and two in the third. In larger terms, the first act sets up the primary tension, the second act changes and resolves it, and the third act solves new tension.

Simple right? Don’t worry, it makes more sense when you see it. Let’s get to it.

Sequence 1 sets everything up. It contains:

a. The status quo (or the background) of the world and protagonist. Krennic and his Deathtroopers land, kill Lyra Erso, and kidnap Galen Erso. This establishes the Empire and Krennic as antagonists. We are also introduced to our protagonist, who is a pseudo-orphan and, 15 years later, an imprisoned criminal.

b. This is the point of attack, or the thing that gets the ball of the plot rolling. Cassian Andor meets Tivik, an informant. He tells Cassian that an Imperial pilot sent by Galen has defected, and has information about a “planet killer” weapon that the Empire is building.

c. The inciting incident, or what brings the protagonist into the plot. This is the first complication, disrupting the status quo. Cassian and K-2SO rescue Jyn from the Imperial labor camp on Wobani, bringing her out of her status quo (loner-prisoner) and into the plot.

Sequence tension created and resolved: Will Jyn go with her emancipators? Yep. Sequence 2 gets the protagonist ready for the journey. It establishes the:

a. The main tension, or the purpose of the “journey.” Cassian and Jyn must go to Jedha to find and talk to Saw Gerrera, so that the Rebels can find Galen.

b. The character tension, which can be broken into want and need. The want drives why they are pursuing the plot. Jyn wants to be free, and therefore must go on the mission the Rebels have tasked her with. The character’s need resolves the third act tension. Jyn needs to acknowledge her past and fight for more than herself.

c. The lock-in, or the protagonist’s decision to undertake the journey. Jyn accepts the terms of the mission. Decision, locked-in.

Act 2 is the meat of most films; it’s where stuff happens. The character has decided to go on their journey, so now they have to do it. Sequence 3 is the beginning of this journey, and is sometimes known as the fun and games of the narrative: the stakes aren’t very high yet, things are loose, we’re meeting new people. It’s a party.

Jyn and Cassian arrive at Jedha. They walk around a bazaar, meet Chirrut Îmwe and Baze Malbus, fight a tank, and are captured by the Partisans. The stakes are still pretty low, but it’s building: now they’ve been captured, so we’re making our way up in the rising action.

In Sequence 4 the stakes have risen a bit and things are maybe not as fun now. It will have:

a. The protagonist learning something. This is a form of complication that further raises the stakes. Jyn learns that her father is definitively alive, did send Bodhi Rook, and built a weakness into the planet killer, called the Death Star, so that it could be destroyed.

b. The midpoint, also known as the second act climax. This is a moment that adds to, but does not resolve, the main tension. It typically mirrors the climax or resolution of the third act. Jyn and company escape Jedha as the Death Star blows it to bits. Notice the mirroring of the resolution of the film.

c. A change in the tension. This change does not resolve the main tension, but it does add a new layer. It is no longer whether Jyn will find Saw so she can go free. Now it is if she will find Galen so she can bring him back to the Rebels, and then she can be free.

Sequence 5 builds on the new tension provided by the midpoint.

Jyn and company travel to Eadu to find Galen. Jyn wants to bring him home. Cassian is reminded of his orders to kill him if found. They find him being interrogated by Krennic.

Here we see the development of some of our newer and smaller characters. In the Wizard of Oz framework, we have: Bodhi needs courage, Baze needs faith, Chirrut…honestly Chirrut doesn’t have an arc. He’s just there to be awesome. Mission accomplished. 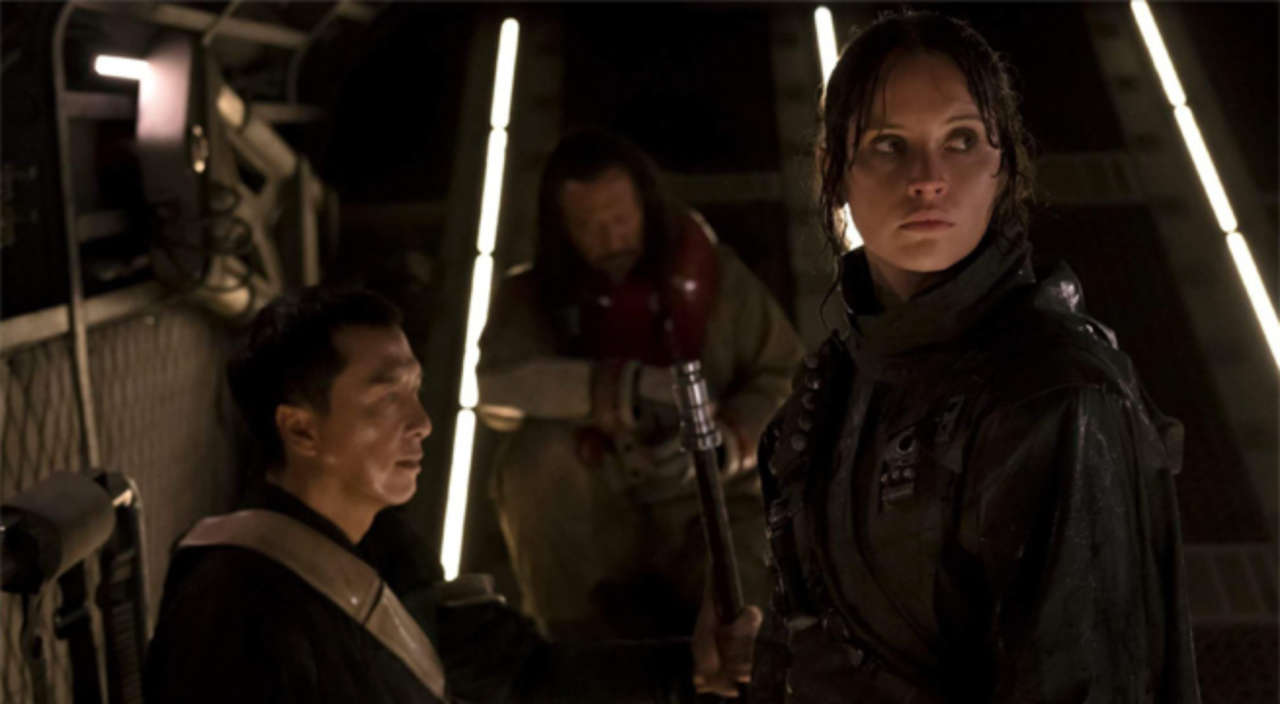 Sequence 6 has the most dramatically named components of the entire screenplay, so it’s a personal favorite of mine. It has:

a. The all is lost moment, when the protagonist suffers a major loss. Galen dies in Jyn’s arms.

b. The dark night of the soul, when the protagonist deals with the major loss emotionally. Jyn confronts Cassian about his secret orders and lies. Everyone is sad.

c. The resolution of the post-midpoint main tension, and the character want: Jyn found Saw, and then Galen. The mission is accomplished, so she is now free.

Act 3 has the highest stakes, new act tension, and sometimes a twist. Sequence 7 is usually where the protagonist’s growth through the second act allows them to make new decisions. The protagonist is typically motivated by a supporting character here as well. In Rogue One we see:

b. The supporting character’s speech. Cassian gets the Partisans, Rogue One, and some pilots together to convince Jyn she has support.

c. A twist that like the midpoint adds to the tension of the act. After Rogue One lands on Scarif and finds the plans, the Rebel fleet arrives, and the gate to the planet closes. The protagonists are trapped. The act tension is now “will Jyn find a way to get the Death Star plans to the Rebel fleet?” 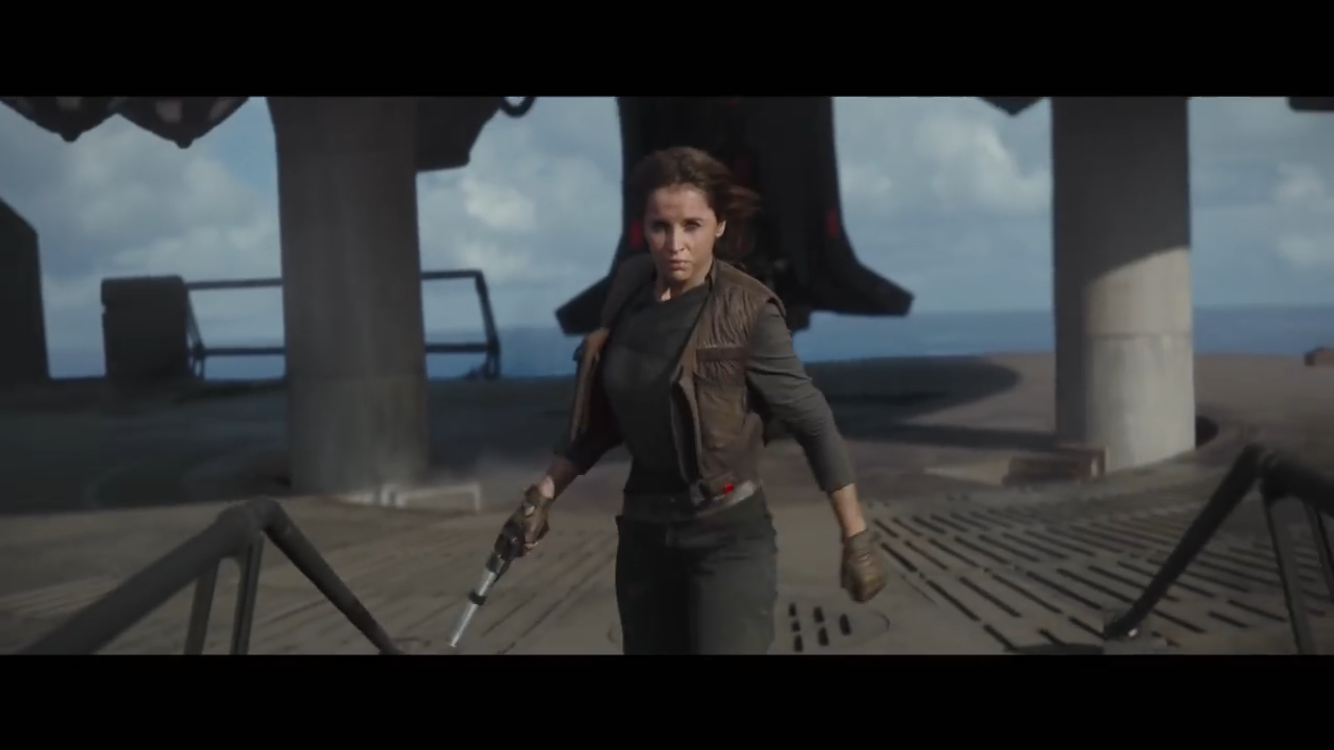 Sequence 8 is the finale. It’s all about:

a. The climax. Everything has led up to this point. The twist has increased the stakes and tension to their ultimate height. In Rogue One, the climax is the sequence where each team member helps get the plans to the Rebel fleet. Bodhi broadcasts out to Admiral Raddus. Chirrut pushes the lever that activates the satellite. Jyn sends the plans. Cassian kills Krennic.

b. Character need resolution. The character’s want was resolved at the end of Act 2. Their need helps resolve Act 3. Jyn needed to acknowledge her past, and fight for something more. She acknowledges her past several times in the third act (when convincing the Rebellion, when finding Stardust, and when telling Krennic her name). Jyn also fights for something more when heading off to Scarif.

c. Resolution. Most films like to have resolution. It’s that feel good moment for the audience. Jyn and Cassian hold each other on the beach as they die. Baze accepts Chirrut’s faith, and repeats his mantra while going down fighting. Bodhi dies with his ship after an incredible last act of courage. K-2SO finally likes Jyn, and gives his life protecting her and Cassian. Chirrut stays true to his belief in the Force through the end.

Sequence tension created and resolved: Will Jyn and the Rogues escape Scarif? Nope.

Rogue One, like most of Star Wars, is unique in that its third act is fairly long. Act 1 runs 20 minutes, Act 2 52 minutes, and Act 3 61 minutes long. This isn’t necessarily typical of a TAS, in which the third act tends to be the shortest of the three.

This does bring up a valuable point, though: the TAS is a set of guidelines, not rules. It is a structure that works incredibly well and is very recognizable, but that does not make it the end-all-be-all of narrative construction. It can be flipped around, shifted, screwed with, for varying artistic effects. Nonetheless, it is helpful to know, especially when it comes to better understanding film criticism. Plus, the next time your friends inevitably get together to watch Rogue One again, you can be the annoying person who brings up technical components that no one asked to hear. And that’s really what this is all about it.

What did you think of our first Let’s Learn About Movies? What movie would you like to see us cover next? Let us know in the comments!