Tom King’s been pretty upfront about the fact that he’s deliberately writing a long, overarching story with his run on Batman. The writer’s spent these last 71 issues constructing an intricate, interwoven narrative. Nearly three years spent unraveling the story. Now with Batman #72, those plot threads start to reconvene as we move toward the story’s climax.

Following on the previous issue, Batman #72 is occupied by one continuous brawl between Batman and Bane. There’s no verbal interchange. There are just the two characters beating the hell out of each other while a narrator provides the monologue. The presentation can be a bit tedious at times. However, the details about the hands-on role Bane played in the story offer enough to keep the reader’s interest.

The reader can presume (probably correctly) who is speaking, but we don’t know definitively at first. The speaker recounts every step in Bane’s grand plan to break The Bat. And, over the course of the book, readers begin to see a different perspective emerge from the story.

Follow me on this one: we’re not reading “a Batman story” here. His name may be on the cover, but this isn’t Bruce Wayne’s story…it’s Bane’s story. Batman #72 forces us to see the entire run in a different light. Once we do, pieces of the puzzle start falling into place. From the beginning of King’s run back in 2016, Bane was always the character with the narrative. He’s the figure whose actions motivate and advance the plot. He’s the one who acts; Bruce, in contrast, simply reacts to circumstances. It’s Bane’s arch, not Bruce’s.

That interpretation may be controversial, but it’s backed by the text in Batman #72. “Yes, you knew then, the one truth in this life,” the narrators says, “That everyone bows to someone. And as such, that there is one man ascendant…and that man is not a rich boy in a cape and cowl.” Bane’s motivation is to prove himself, once and for all, to be Batman’s superior, as it has been since the character first appeared.

Although it’s primarily a recap, the issue feels like a turning point, propelling the narrative toward its climax. Thus, the reader doesn’t feel cheated by a simplistic rehashing of our story up to now. 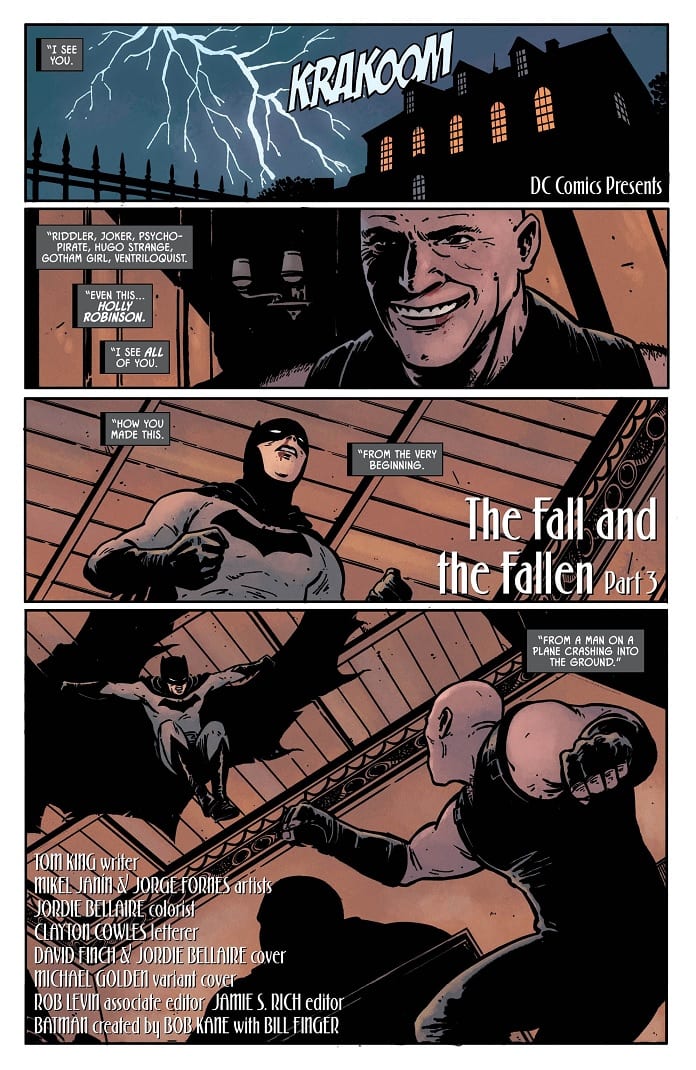 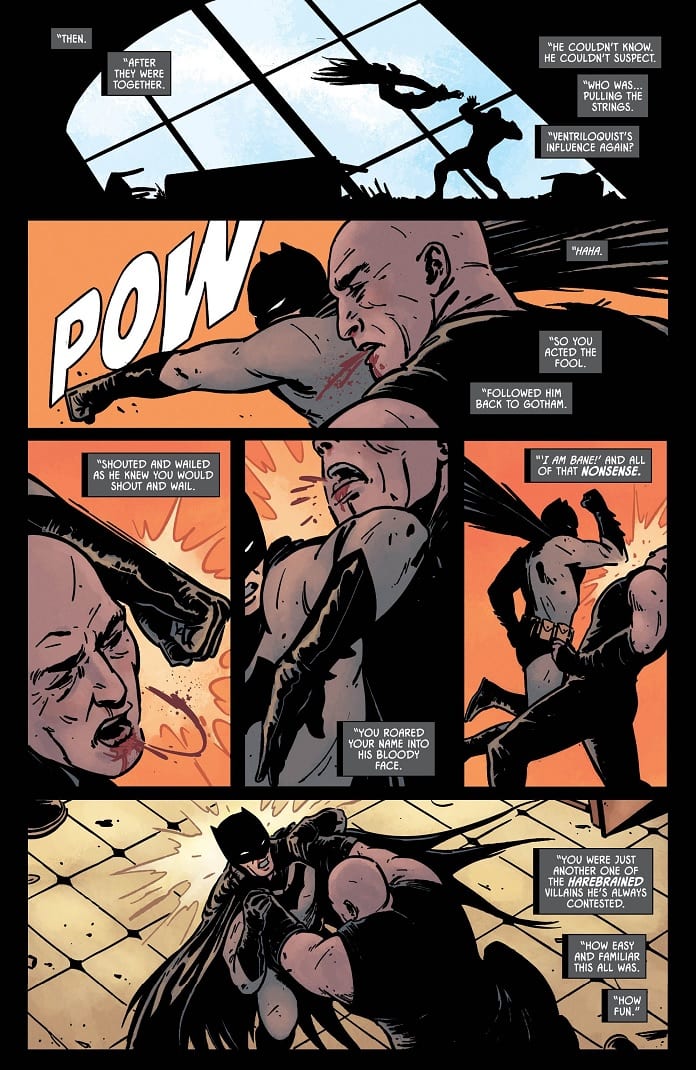 The art team of Mikel Janin and Jorge Fornes provide solid, and occasionally striking images here. The inks are heavy and shadowy, with just a touch of cartoonish flair.

As mentioned, much of Batman #72 is dominated by the fight between Bane and Batman. These pages keep their focus fairly tight on the characters, but you never feel lost or disoriented. The visuals flow well from page to page. Every two pages, the artists open up to a full spread, presenting key moments from the series up to now. They’re well done, and don’t interrupt the action.

That said, there’s a disconnect between what we’re seeing on the page and what we’re reading. This makes it hard to tie the two together. The end result is that Janin and Fornes’s illustrations feel like an accompaniment to the monologue, rather than as part of the whole. It’s a good show, but it feels somewhat wasted when the reader’s attention is more focused on the  narrator, rather than the action.

Batman #72 is above-average for a recap issue. It refines the narrative, rather than just regurgitating it, but its value hinges largely on the next issues.

Review: You're in Bane's World Now in BATMAN #72BATMAN #72 is primarily a recap issue. However, it recontextualizes the series thus far and builds hype and momentum leading into the climax of Tom King's run, making for more prescient reading than your standard recap.